In the 1990s a Texas couple purchased some Mexican masks from René Bustamante. René had a Mexican mask store back then in Santa Fe, New Mexico that was named Zitlala. Now the couple are reducing their collection, and they have asked me to show masks that they would like to sell. I agreed, with the understanding that I would describe the masks carefully and  honestly. If you are interested in buying any of these masks, then you are invited to contact Chris Hedrick, to pursue this interest. His email address is

I am announcing the availability of these masks, but I am leaving all of the transactional details to you and the seller. I am not an expert re current mask values and prices, although I have a warped view from my observation of undervaluation and bargain hunting on the Internet, so I would prefer to not comment on the price or value of these masks. On the other hand, I will share my concerns regarding authenticity, when this is relevant.

The first mask is interesting and unusual. It was sold to the current owners as an ancient mask from La Parota, Guerrero that was said to have been found in a church, where it had allegedly hung on a wall for hundreds of years, although subsequently the church was destroyed, so one can’t look for it to corroborate this account. Among Mexican mask collectors, these masks have been called Barbones (bearded ones). This Barbon was carved from dense heavy wood, and weighs about three pounds.  It is large—9 inches wide and 20 inches tall. The nature of the wood is difficult to assess, since it is more or less entirely covered with black paint that has been highly polished. In small flaked areas the wood appears to have a reddish-brown  color. There don’t seem to be any cracks. I wonder if this mask might have been made from Mesquite, a reddish-brown wood that has a long history of use by Mexican cabinet makers, and more specifically it was often used for the doors in churches. Mesquite is hard, dense, and stable. Here is that mask. 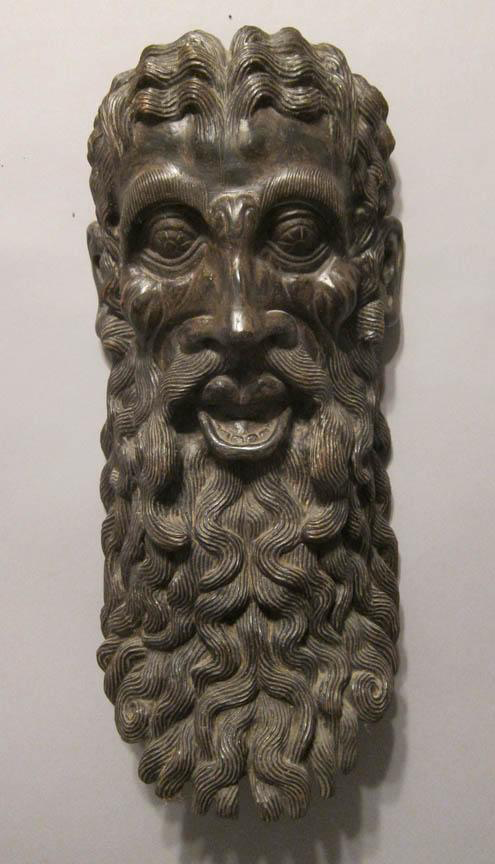 In his book, Mexican Masks, Donald Cordry often presented masks with such accounts. It’s your choice to believe them or not, and maybe René Bustamante believed this one. Here is the side view,

and a closer look. 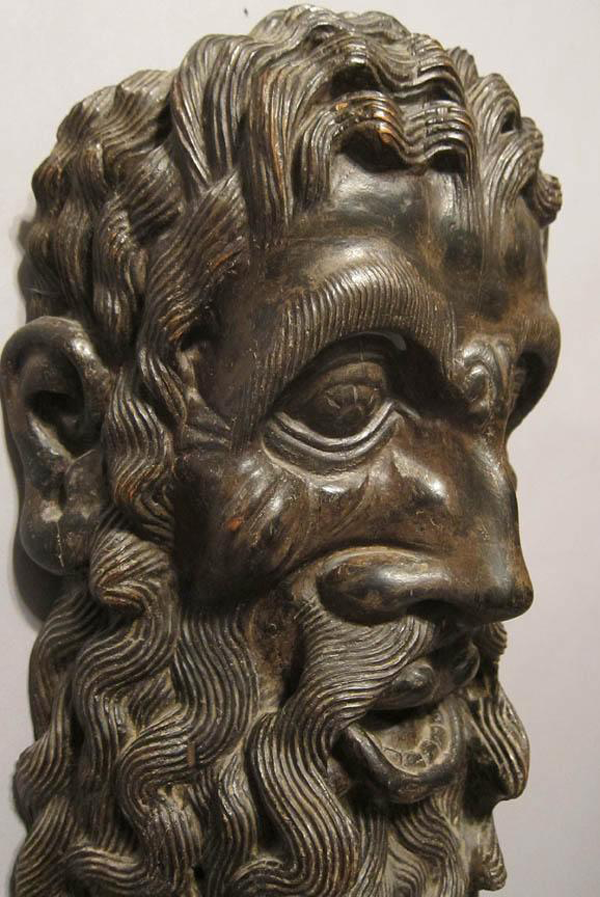 The next two photos provides further glimpses of the color of the wood.
First I’ll show a photo of the hair, above one eyelid. 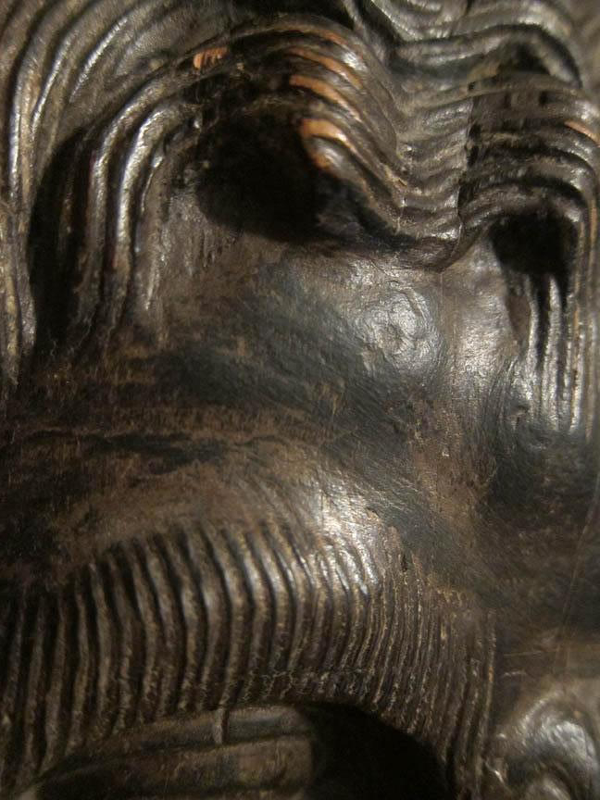 The next photo reveals spots on the back where flaked areas reveal a glimpse of the color of the wood. 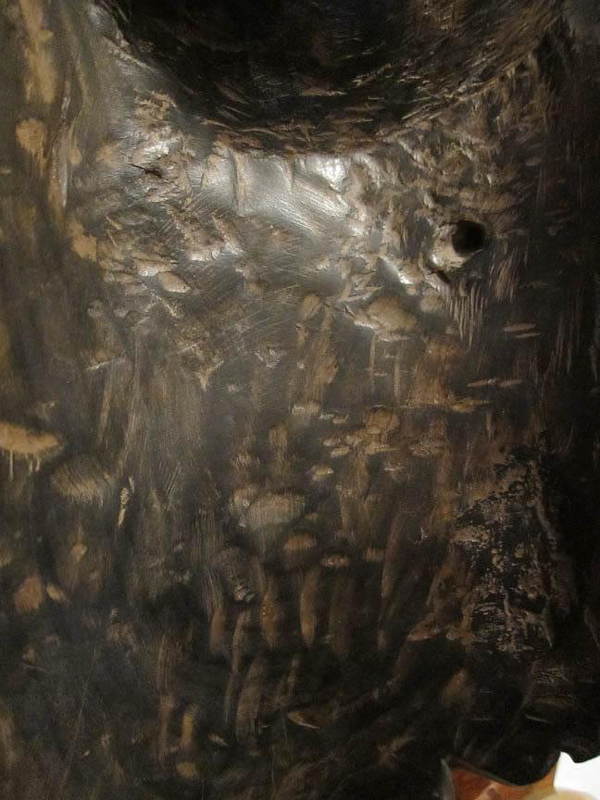 In 1985, the McAllen Museum in McAllen Texas published a book, Changing Faces: Mexican Masks in Transition, which said that according to a panel of experts these and some other styles in Donald Cordry’s book had been carved to deceive, they were given false dance names, often said to be from non existent towns or falsely attributed towns, and they were rubbed or stained to create a false appearance of great antiquity. In 1988, Ruth Lechuga (a respected Mexican anthropologist) went looking for these towns. Noting that Cordry reported his impression that a number of these masks were made in La Parota, Guerrero, Lechuga visited two small towns in Guerrero named La Parota; there she inquired about their masking traditions. Townspeople told her they had no mask traditions, no fiestas, and no church to be the focus for such fiestas. In my opinion there are no genuine Barbon style masks, meaning traditional, and as old as they appear to be. 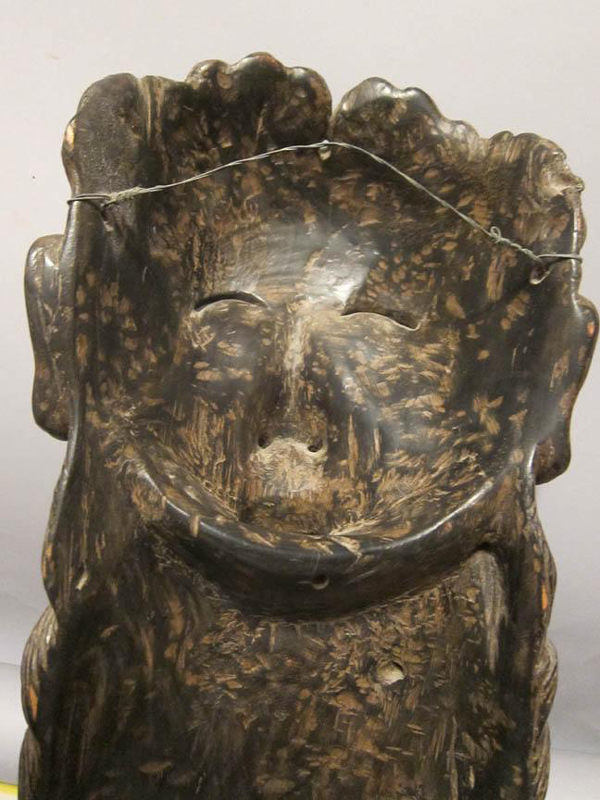 False aging is one aspect of the presentation of these so-called “decorative” masks. This can take two forms. In some cases, as in this example, the backs of masks are uniformly stained a dark brown or even black, as if to suggest that the mask is “dark with age.” Other operators were more subtle, using light or moderate stains to simulate age and use. We will see an example of this approach later in this post.
My Chicago friend, Charles  “Chuck” Thurow has told me that he had heard about these Barbones masks even when Cordry was still alive, and before Cordry’s book was published. Briefly, he believed that the invented masks that were presented to Cordry came in the first of two waves: 1. Very highly sophisticated inventions that were indeed intended to fool Cordry, and for that reason made from superior materials by highly skilled artisans, and 2. copycat masks that were of lessor quality, made for sale to tourists and collectors. Chuck was amused by the idea that the targets of colonial exploitation could turn the tables on their “exploiters,” so to speak, by using a relationship that had long worked to exploit them (the indigenous peoples of the Americas). Chuck and his friends felt that the masks in the first wave could be perceived as game-changing folk art that was so interesting and excellent that it belonged in a museum. He went to Mexico in the company of Dale Hillerman, because of their shared goal to buy some of these masks, which it seems they did. I would say that this mask is from the first wave and that the use of a  heavy traditional wood such as Mesquite would have been a clever way to create a mask that not only looked old, but also had an impressive weight.
In 2014 I invited Chuck to share his views about the Barbones and other masks in my blog. Here is the link to his remarks.
https://mexicandancemasks.com/?p=912#more-912
In summary, although this is not a traditional mask, it may well be a wonderful example of covert activity by subjugated peoples when they feel economically oppressed by a system based on colonialism. As I noted in my book, such themes seem to lie just under the surface in many Mexican Dance traditions.
____________________________________________________________________________________________________
Next we will examine a molded leather mask, said to be from dance of  Los Viejitos in Guerrero. There were traditional molded leather masks there in the past, and now there are reproductions. I never really paid much attention to leather masks, because I thought they were difficult to evaluate. Therefore I am not in a position to say definitely whether this mask is authentic or a reproduction. It is remarkable to see what a craftsman can do with a piece of leather. 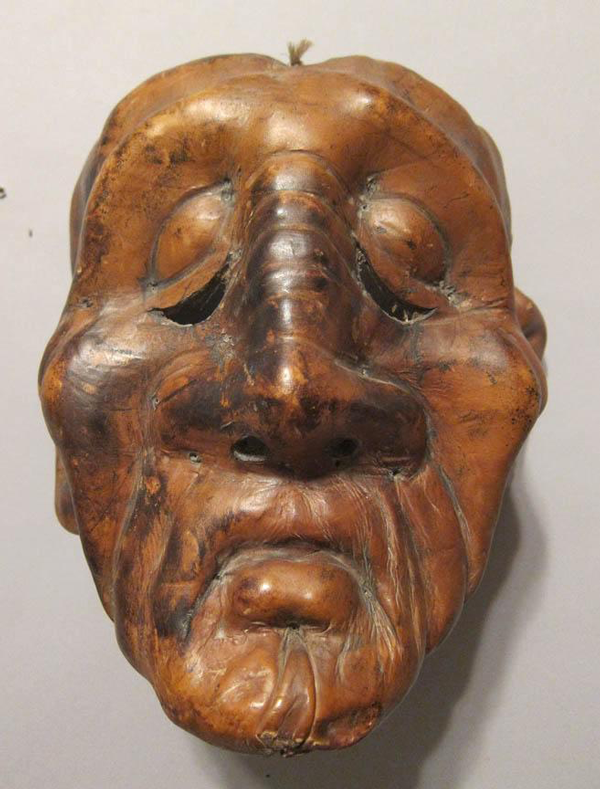 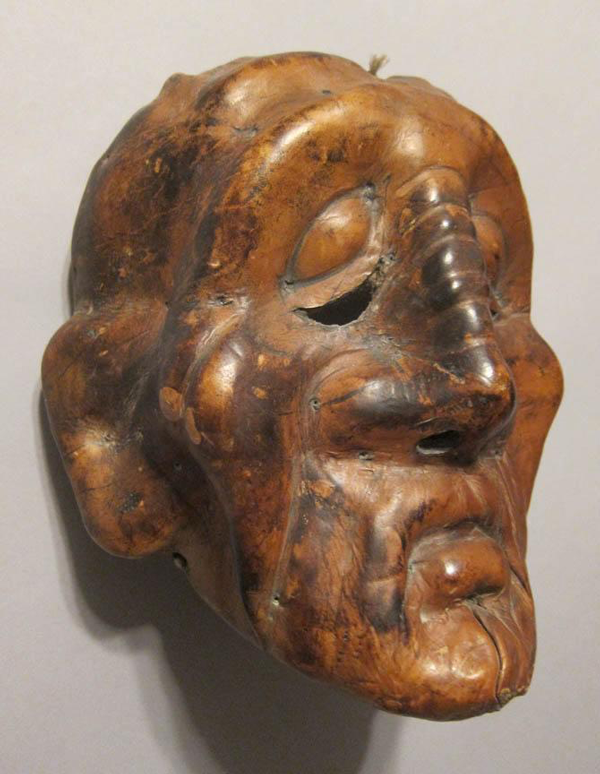 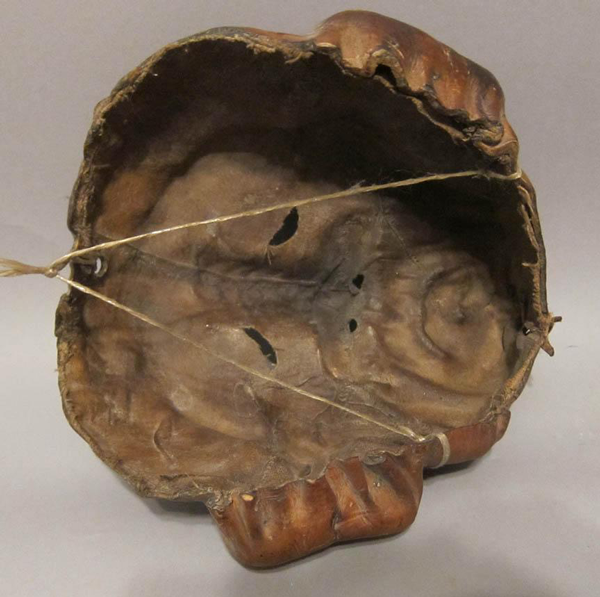 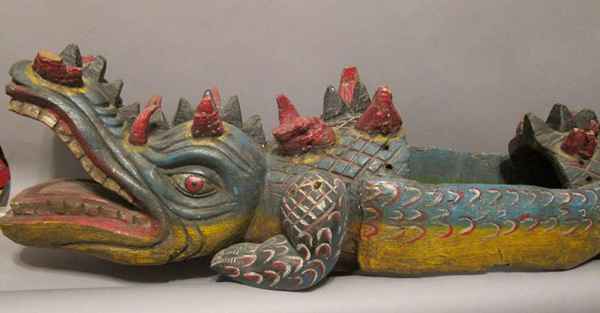 Next is a photo of the bottom of the pelvis of the Caimán body mask, illustrating damage and wear that might have occurred when the dancer abruptly dropped the mask to the ground so that he could step out. This appears to be evidence that this mask was actually used in a dance. In passing, this photo also demonstrated that the body sections have been hollowed to make the mask lighter. 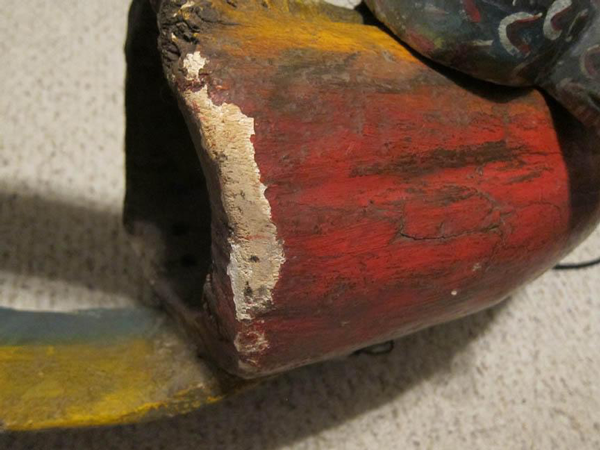 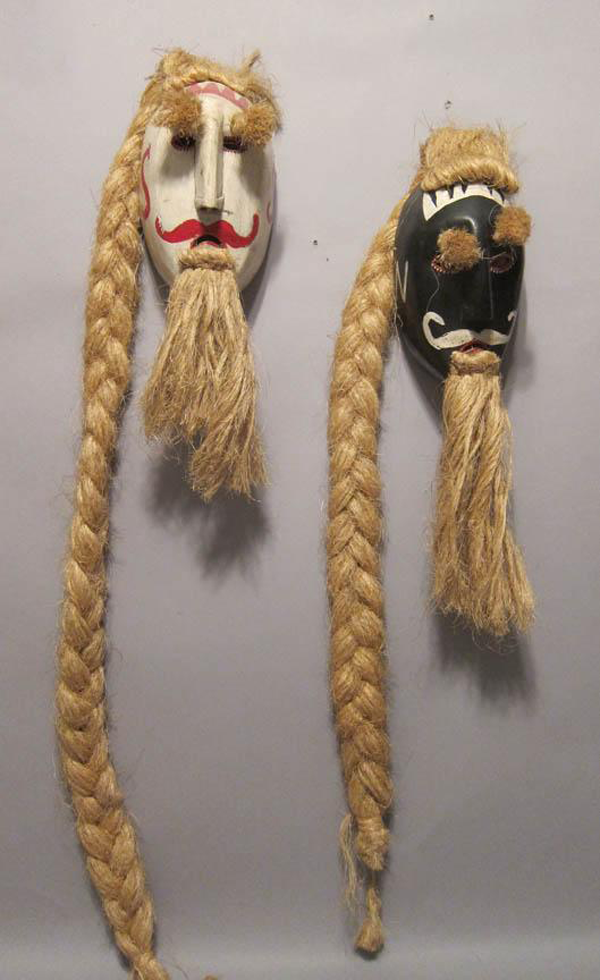 This style of Juanegro masks usually have these N and S markings. Maybe these refer to North and South barrios within the village where they were made? 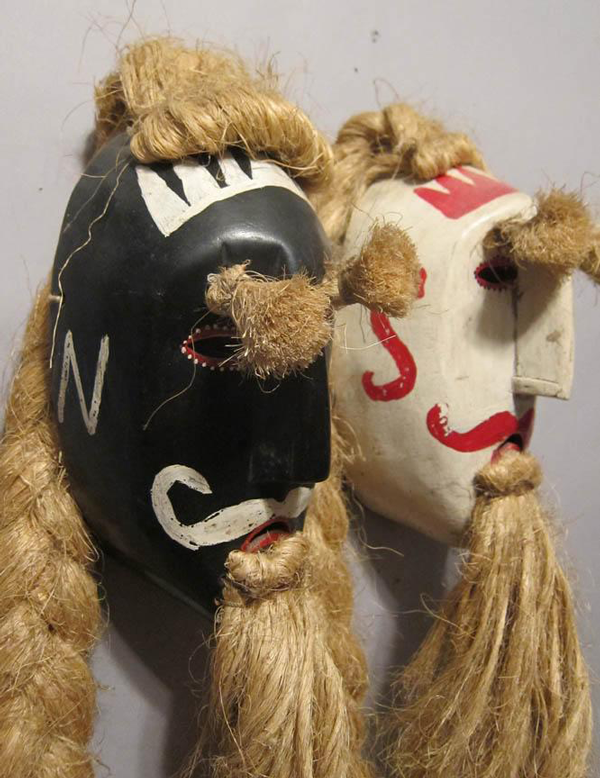 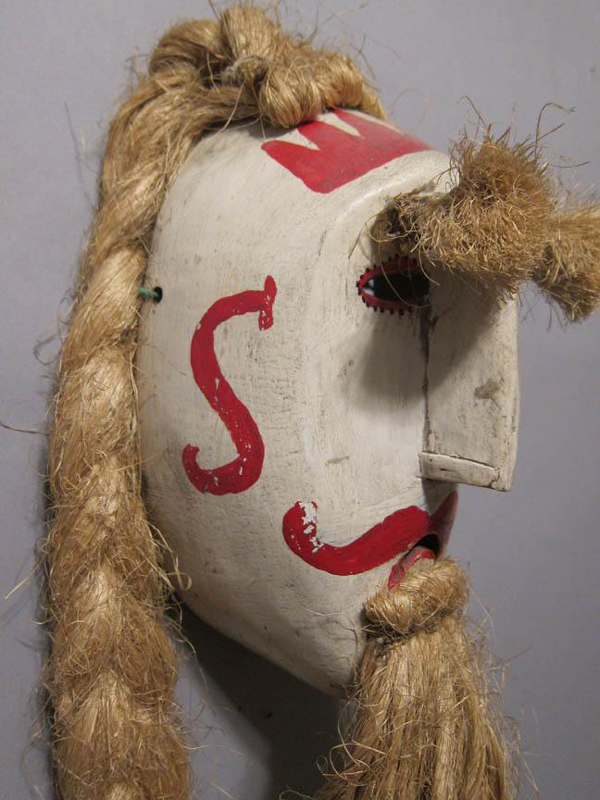 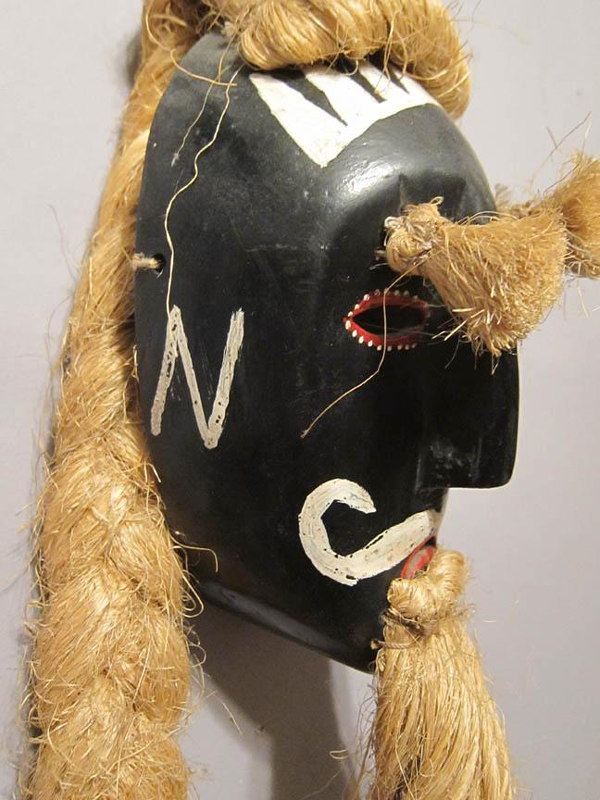 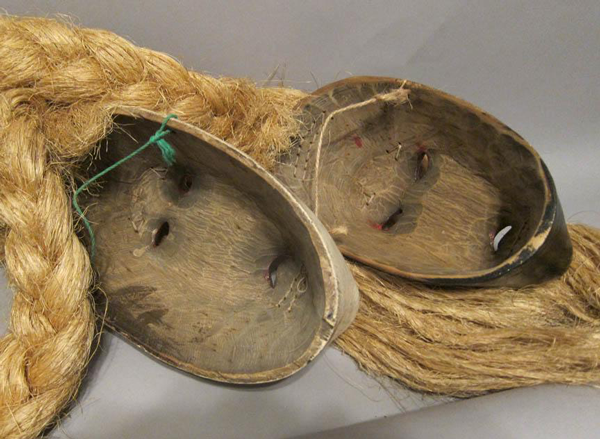 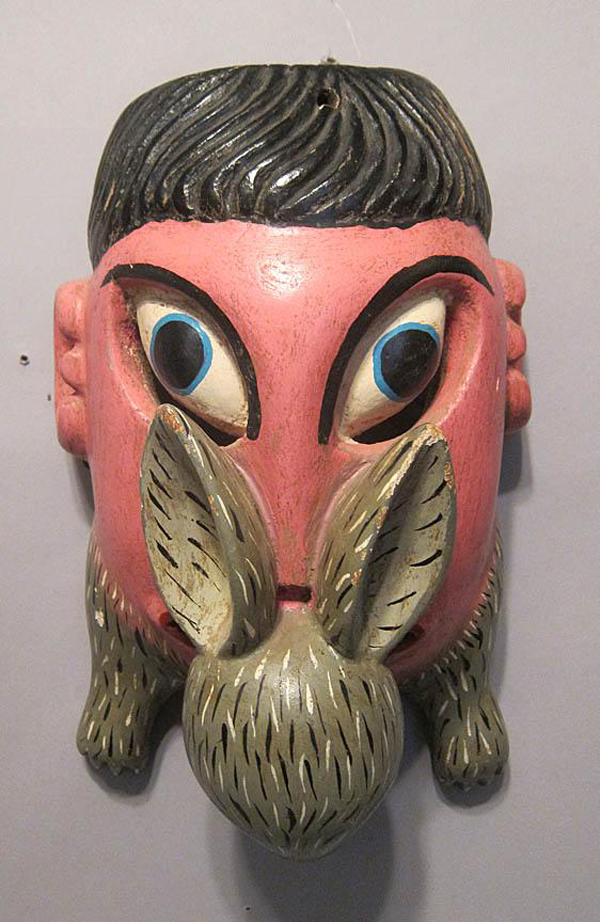 On the other hand, this mask is well carved and of a clever design. 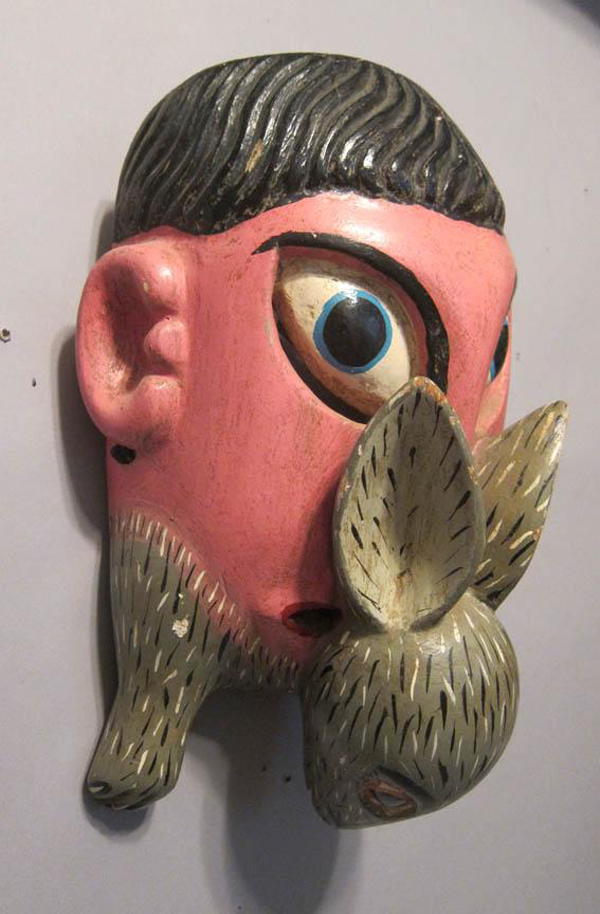 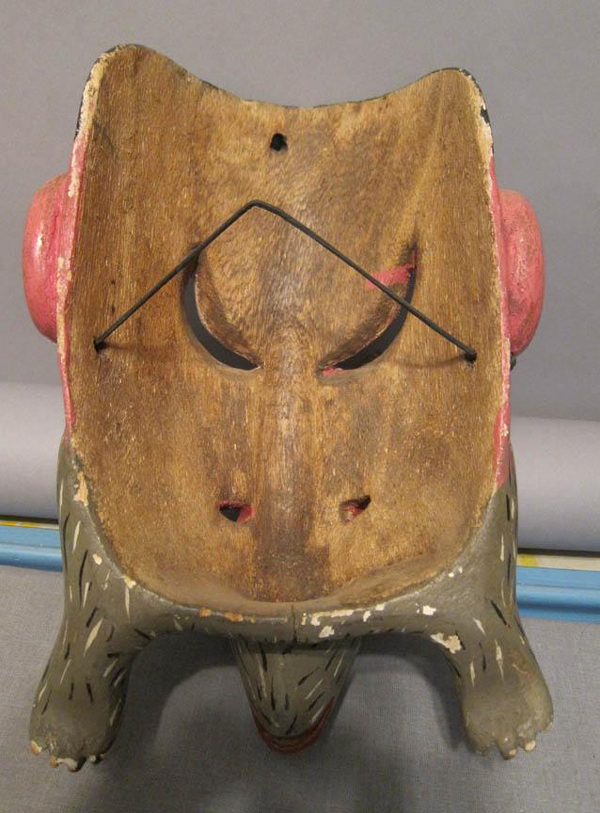 At first glance this mask has a stained back that might lead us to think that it was danced. However this mask demonstrates false aging, rather than the  typical differential staining from the wearer’s sweat. For example, the staining extends from the top of this unusually tall mask to the bottom, as if the wearer had a very long face. Furthermore, the staining is not lighter in the middle, in fact it is darker in places. In my view, this is an obvious decorative mask.
Next week I will show you an excellent old Diablo mask from Guanajuato that I could not resist buying when it recently appeared on EBay™.
Bryan Stevens