Last week some of us waited together to see some new arrivals from a Texas collection that had originally been gathered in the 1950s and later. We examined seven masks from the Sierra de Juárez that had earlier been in the collection of Rex and Dolly Marcum, who lived in San Gabriel Etla, Oaxaca and are now long deceased. I have other masks in my collection that were obtained later from their estate.

Today we will examine an eighth mask from the Texas collection. This one is clearly not in the style of the Sierra de Jauréz and is not from the Marcum collection. It was obtained from a female dealer in the city of Oaxaca, probably in the late 1970s or early 1980s; the seller recalls simply that this dealer’s name was Schöndube, and I am assuming that she was a dealer in Mexican folk arts such as textiles, pottery and masks. The Cleavers have vague recollections of visiting Schöndube’s shop in the 1970s. This is of course an unusual name to encounter in Mexico, and a search yielded only a few individuals with that name.

Fortunately, the little that was discovered seemed sufficient to shed some light on this dealer and her family. First I located a print for sale on the Etsy™ site that was labeled as the work of “C. Schöndube, 1963.”

Here is the link to that interesting and attractive print, which illustrates the variety of native costumes worn by indigenous women in the state of Oaxaca. Evidently C. Schöndube had some expertise in this subject, which would certainly fit with the profession of managing a Mexican folk art store in the same state.

Then I discovered that the various individuals with the Schöndube name were all members of one family. The relevant passage is in the second paragraph—”Poco antes …” 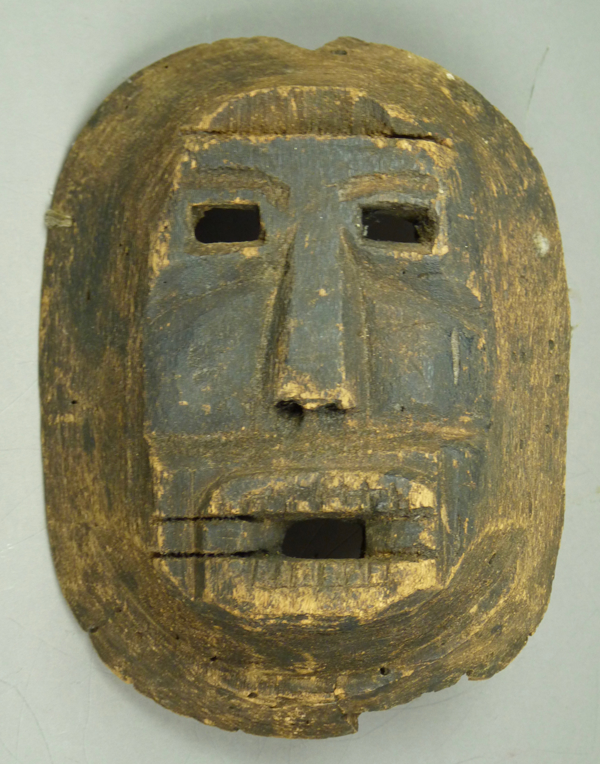 This is a very rare mask, one that I have never previously seen. I first wondered about the purpose of the sawn slits across the forehead and above and below the mouth. My guess is that some sort of fiber, such as bundles of sisal, might have been tucked into the grooves to provide eyebrows and a mustache.
My next question asked why the face was painted black, while the spaces around the plain of the face were stained instead? This led me to see that this is a mask of a monkey, whose face is framed by a ring of hair. So this is a monkey with prominent brows and a mustache. 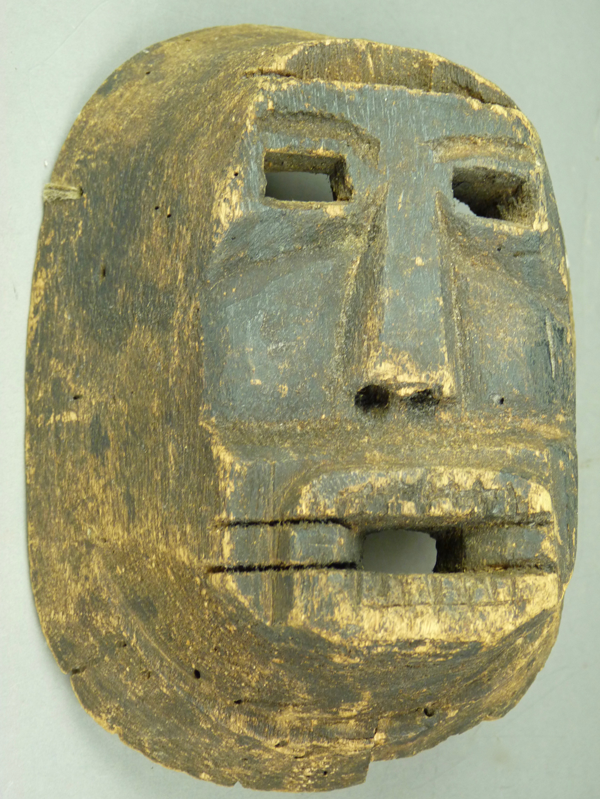 This is subjective of course, but the dramatic teeth of this mask create a potentially aggressive appearance, or they would have when they were more prominent (less worn). 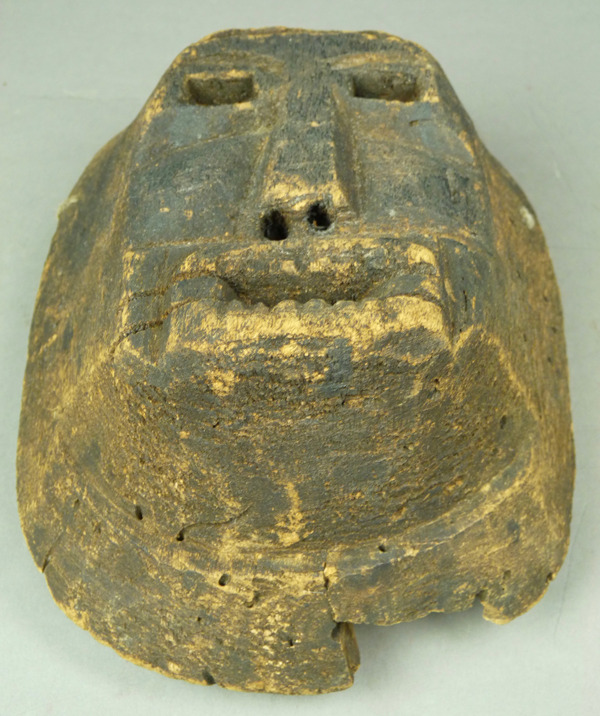 The carefully carved rim around the chin provided further evidence. The Monkey masks of Guatemala are often depicted with carved rims that completely circle the face. This partial rim would seem to reflect that Mayan tradition, but not as found in Guatemala. 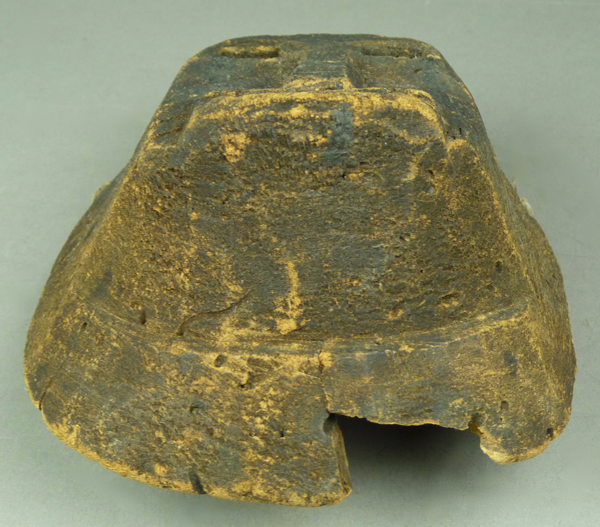 Based on these observations, can we  attribute this mask to a known dance and community in Mexico? I will suggest a possibility.
In the town of San Juan Chamula, Chiapas, a Tzotzil Indian town, there are “Mashes” (in Spanish- Monos, in English- Monkeys), who dance during Carnaval. They wear conical helmets decorated with ribbons and costumes that are modeled on antique military uniforms. They may have once worn masks like this one, although now they wear a printed bandana that covers the face to the level of the eyes, along with reflective aviator style sunglasses, obviously modern innovations.
https://www.facebook.com/353318388186187/videos/627412930776730/
This mask is 8 inches tall, 6 inches wide, and 3 inches deep. 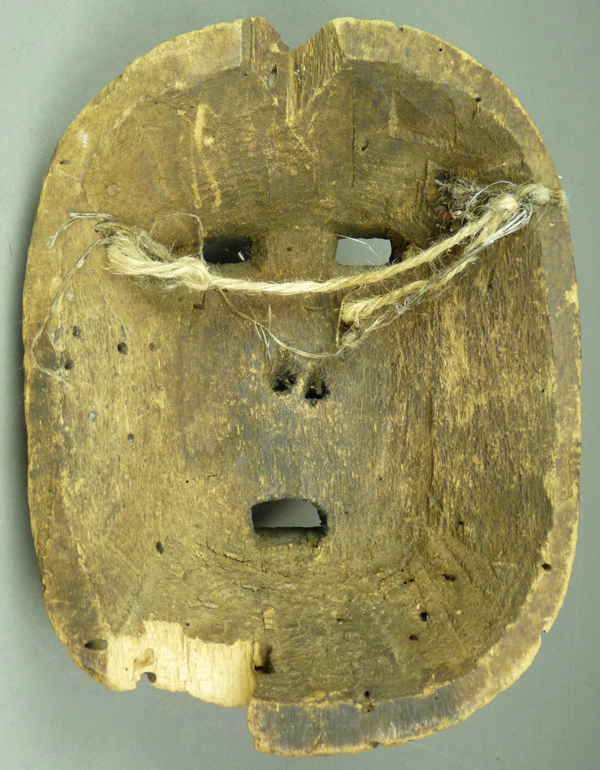 There is a hole in the chin for a chin strap, which is more easily seen in the two photos above this one. The back had been stained with some protective coating, and so for this mask one estimates wear by observing for the loss of this coating, which is obvious on the sides of the back.

Next week— I do not as yet have any material. In the future, I may be presenting other masks from the Texas collection. Meanwhile, if you have something interesting to share, please let me know.