In recent posts you saw masks for the Hormegas dance, a variant of the Danza de los Santiagueros. I thought that I might as well proceed to the Santiagueros dance itself.

The Dance of the Santiagueros and the dance of the Hormegas are examples of Mexican Indian dances that pretend to be about one thing when they are really about something else. Indians in Mexico have long used such dances to express political and social complaints in a disguised form, initially in order to avoid conflict with religious and civil authorities and more recently to complain and vent about situations of economic and social injustice in their communities. James C. Scott described such strategies in his book, Domination and the Arts of Resistance: Hidden Transcripts (Yale University Press, 1990). Later Max Harris applied Scott’s ideas to dances in the Americas in his book Carnival and Other Christian Festivals: Folk Theology and Folk Performance (University of Texas Press, 2003). I devoted an entire chapter to a discussion about such layers of meaning in my book about the Sierra de Puebla. I will begin this post with a mask and related props. Later I will explain how the ideas of Scott and Harris can be applied to the Dance of the Santiagueros.

The Dance of the Santiagueros has three groups of players. Santiago Caballero (Saint James on horseback), who is said to be the reincarnation of Saint James the Apostle, is usually depicted as riding a white stallion; he and his mount may stand alone or they may be accompanied by Santiago’s invented son, Callintsin, whose principal duty is to guard his father’s wooden horse from harm. There are two other groups of dancers, the Santiagueros and the Pilatos, and the relationships between these three entities prove to be mysterious and interesting.

Although Santiago occasionally wears a wooden mask, it is more usual for Santiago and Callintsin to dance without masks, but they do wear characteristic helmets, they carry wooden swords, and of course Santiago’s wooden horse is the most important emblem of his powerful position. Traditionally the Indians have treated Santiago’s horse as if it were a living saint, although this is not something that they describe in such explicit terms. Each year guardians are appointed to house the horse; they must offer the horse fresh food and water each morning. Here is one of those horses. It was found in the area of Papantla, Veracruz, in the mid-1980s, and was accompanied by a helmet and a mask to be worn by Santiago. 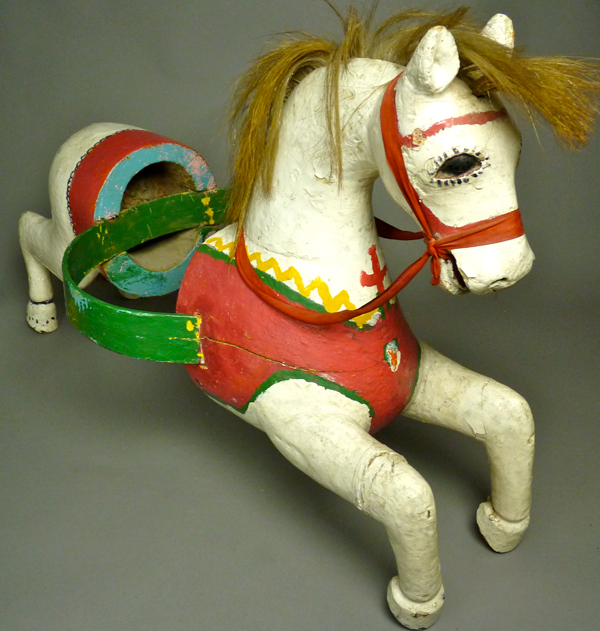 Ropes or straps suspended the hoop of the dance horse from the dancer’s shoulders. This horse is 34 inches long and the hoop is 15 inches in diameter.

END_OF_DOCUMENT_TOKEN_TO_BE_REPLACED

As I noted in last weeks post, to make sense of la Danza de Lakapíjkuyu and la Danza de Lakakgolo one must turn to a pair of legends, so I will briefly repeat them. Until the birth of Jesus, the world was dark, but at the moment of his birth an extremely bright star appeared (Christ and the sun were born at the same time). There were people and animals who apparently understood that the light was a gift from this newborn baby, so they gathered around him. The animals included the Oso (bear), the tlacuache (opossum) and the piskuyus (garrapatera birds). They danced for Jesus and he immediately stopped crying. Also the piskuyu birds spread their wings over the infant to protect him from the dust and wind. However a second version states that human visitors came dressed as animals, some to worship the infant, others to rob or kill him. Suddenly the sun rose, and in its light God judged the visitors. Some were permitted to remain and worship and they are represented by the  Lakapijkuyu dancers. Others were transformed into the animals that they were portraying, then they went to find refuge in the wilderness (monte). They are said to be represented by the Oso (bear) dancer and the “viejos” in the Lakakgolo dance, who dance to commemorate the veneration of those visitors. At one time the Lakakgolo dance included representatives  of all those visitors whom God had banished, but later the “Matarachín” and his Viejitos were given a dance of their own (discussed in my post of 09/08/2014).

The masks in the Lakapíjkuyu dance represent the faces pf the Piskuyu birds. The most remarkable masks in la Danza de Lakakgolo are those of bears. Here is an example that was carved in about 1990 by José González Hernández, of Comunidad Morelos, in the Municipio of Coxquihui, Veracruz. Vernon Kostohryz obtained this mask from José in 2005. 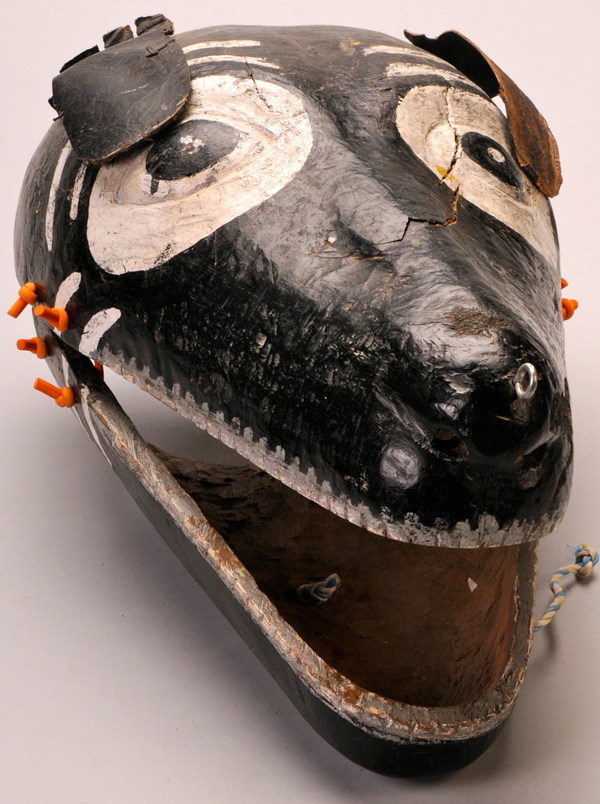 As you can see, this bear mask has an articulated jaw, meaning a jaw that is movable. Because it is attached with rubber bands, which can stretch, it tends to bounce when the dancer moves. The dancer must peer through the open jaws in order to see. This mask is 19 inches long, 11 inches wide, and 9 inches in depth.

END_OF_DOCUMENT_TOKEN_TO_BE_REPLACED 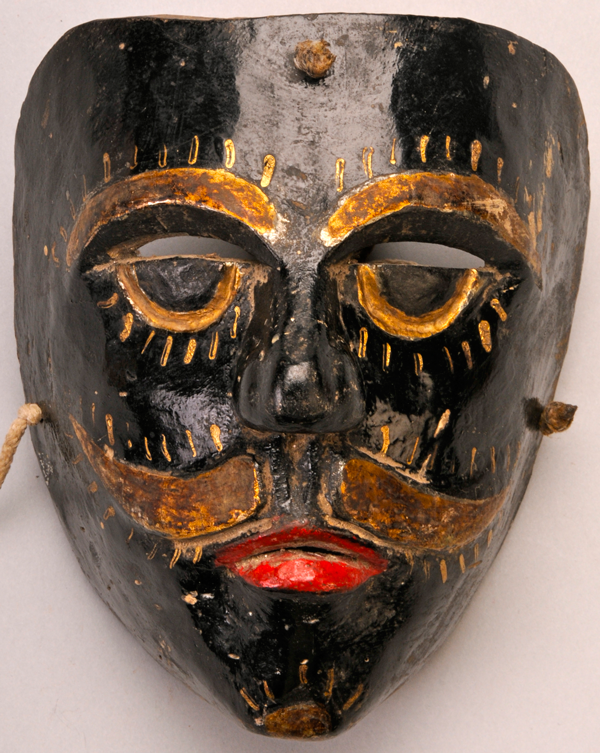 This lovely old mask was carved by José González Galindo of Coxquihui, Veracruz in about 1980. In last week’s post, his son was the carver of the Mickey Mouse mask.

END_OF_DOCUMENT_TOKEN_TO_BE_REPLACED

Please Note A New Feature Available in the Header—The Index to Mask Photos and Related Topics. For example, if one looks under “Tigres” there will be a listing of dates when Jaguar mask photos were presented.

My book about the masks and puppets of the Sierra de Puebla was officially published in September of 2012. During the five years that led up to this event I had made repeated visits to mountain towns in the Mexican states of Puebla and Veracruz in order to observe dances, meet and photograph carvers, and buy interesting masks. I promised to bring to each carver, dance leader, or representative family member  that gave me assistance in my research a copy of my book when it was finally available. Therefore, my wife Lucy and I traveled to this area on December 6, 2012 for the purpose of giving away about seventy books; we flew back to Pennsylvania on December 16. It was during that trip that I became interested in the Mujer de las Cebollas character that I wrote about in my post of November 17, 2014. Now I am writing about that trip because it occurred at this time of the year, exactly two years ago.

The first visit on the tour was to the workshop of Silverio Ochoa Martínez, in San Juan Xiutetelco, Puebla, a town near the city of Teziutlan, Puebla. Silverio had confided to Carlos Moreno Vásquez that he had long doubted that he would ever see this book appear. He was delighted to have been mistaken. It is always interesting to see what Silverio has been carving, so I took this photo. 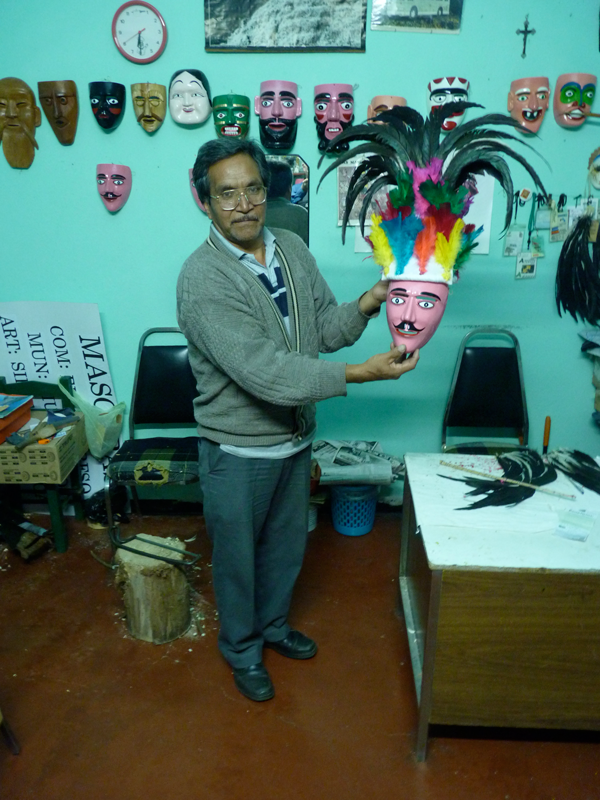 We see Silverio holding a feather headdress that he has just completed, along with a Pilato mask, as the headdress is to be worn by that character in the dance of the Santiagueros. There are additional feathers on the workbench as he was making a number of headdresses. On the wall you can see a variety of interesting masks by this carver. I was most puzzled by the oriental looking mask above Silverio’s head; he said that this was his invention. The mask on the right with green around the eyes and  a knife in its teeth was described as a “pirate.” Obviously Silverio is a very talented carver. Most of the visible masks are traditional and are used in local dances.

END_OF_DOCUMENT_TOKEN_TO_BE_REPLACED

In about 2006, when Vernon Kostohryz and Carlos Moreno Vásquez were searching for old masks in the area of Filomeno Mata, Veracuz, they met an elderly man who had a mask that he wanted to sell; he had danced with this mask for many years. He told them that this mask had been used in the Hormegas dance and that the carver was Benito Juárez Figueroa. This was the mask that introduced me to this remarkable carver, who was born in 1910 and died in 1994, and to the Hormegas dance, a variation on the dance of the Santiagueros. It is obviously old and heavily used, with one coat of paint over another in two or three layers. 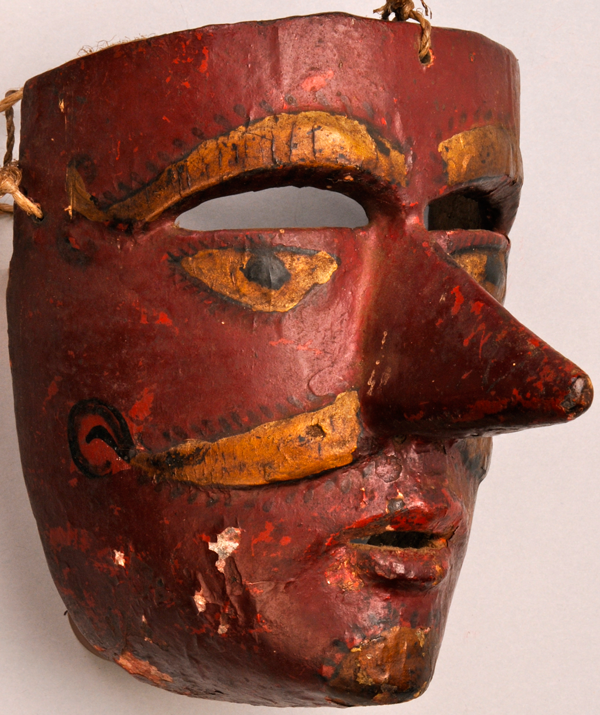 The eyes, brows and mustache are carved in low relief and the lips are carefully shaped.