Now that I have told you so much about La Danza de los Santiagueros, this would seem a good time to discuss the helmets worn by Santiago in this dance. They are varied, attractive, and interesting.

In previous posts you may recall dance photos of Santiago. Let’s review those photos, because they will orient us to some of the helmets to follow. Here is the photo of Santiago dancing at Cauahtapanaloyan, Puebla in December 2008. He is wearing a woven straw hat, but what I want to point out is the characteristic decorative design of bristles and paper flowers arranged in an arc over the crown of of the hat. This is one of the standard variations for Santiago’s helmet. Also note the painted lines on the bottom edge of the brim; these probably represent the rays of the sun, as is also the likely symbolism of the colored bristles. In focusing on this wonderful Santiago figure, I failed to notice that I was also tracking the retreating form of Carlos Moreno Vásquez. 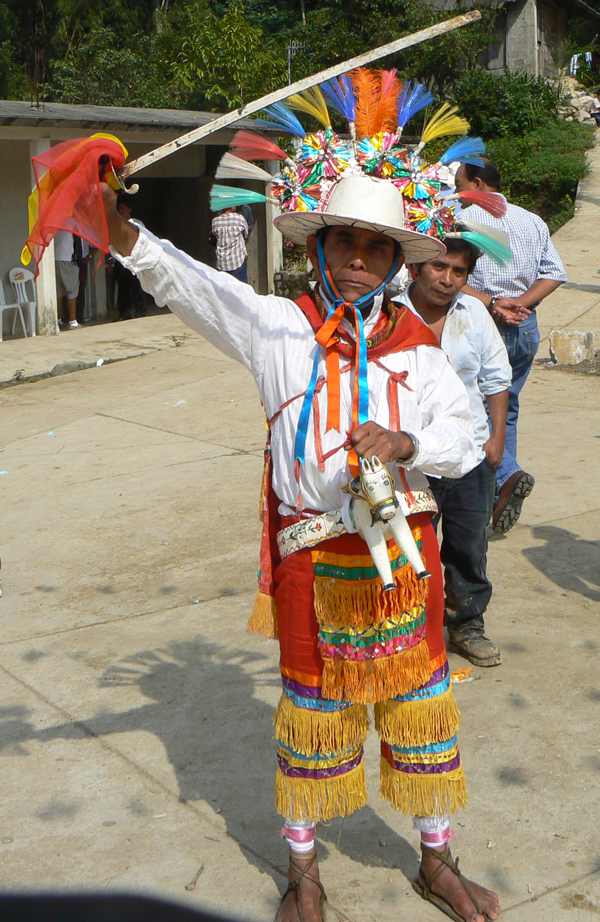 I showed another photo of a Santiago in costume in another post; he was preparing to dance at Zoatecpan, Puebla. The composition of his helmet is not obvious; it could of carved wood. Again one sees this arc of bristles and paper flowers over the crown of the headdress. The rays of the sun emanating from this dancer’s headdress (the golden fringe) are plain to see!

In 2007 Vernon Kostohryz, Carlos Moreno Vásquez and I spent an afternoon searching for old masks in the small town of Ixtepec, Puebla. We were offered a number of Hormega masks by Benito Juárez Figueroa. Just at dusk we were invited to see a dusty old wooden helmet in an unlit shed. The beam of a flashlight did little to reveal the helmet’s appearance, but I bought it anyway, suspecting that it might have been the helmet worn by Santiago in the Hormegas dance there. In the light of day and relieved of its dusty coat this was obviously a helmet that was worn by Santiago. “Why obvious?”— you might well ask. It has drilled holes in an arc over the crown to receive the characteristic bristles. Here is that helmet, seen from the front. 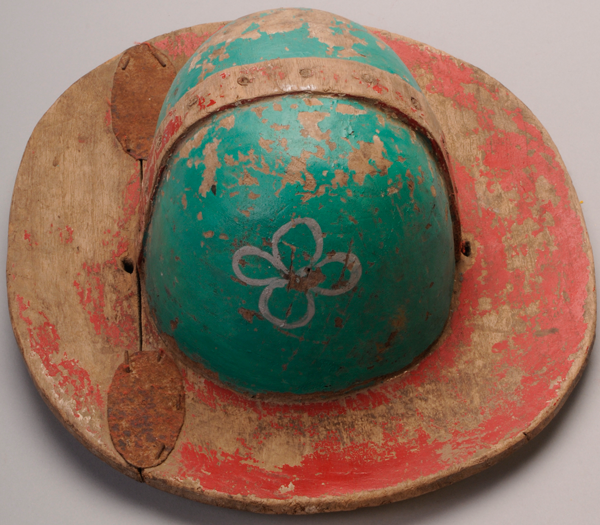 Here is a view from the side, illustrating the same feature. The brim had split and is held together with tin plates. 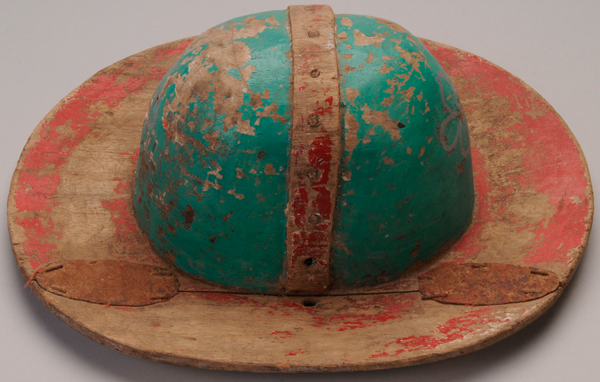 Here is a view of the helmet from below. The brim is 15 inches long by 13 inches wide and the crown is 5 inches tall. One doesn’t see the sun’s rays; instead the entire surface depicts the color of the sun. 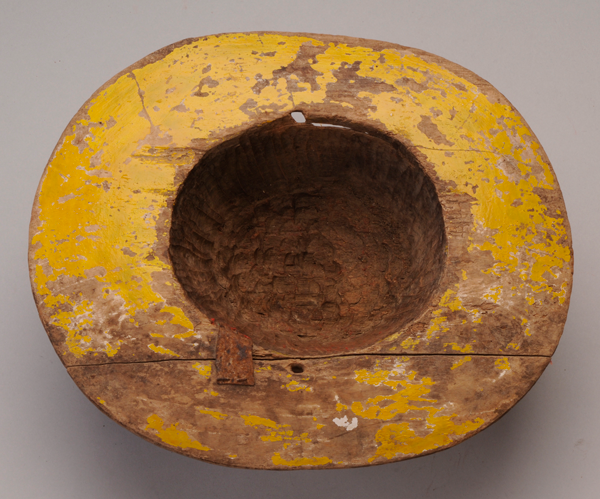 In my post of August 8, 2014 I showed a trio of masks with their respective headdresses for la Danza de los Archareos, a version of the Moros y Cristianos dance in which the Christians are led by Santiago. One of these sets (mask and headdress) was worn by Santiago and that headdress provides another example of this arc of rays style. 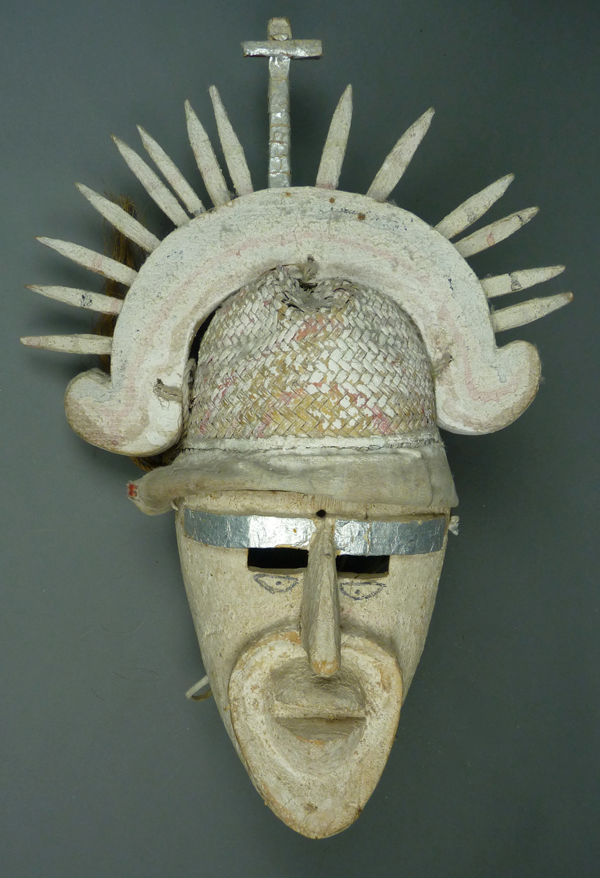 When Santiago is depicted as an evangelizing pilgrim rather than as a warrior archangel, he wears a broad brimmed hat like the wooden one from Ixtepec, but without the ring of bristles. Sometimes one sees a Santiago helmet of this plainer form. “Plainer” does not seem to be the right word for the next example, not because of the form but due to the dazzling paint. Here is the view from in front. I have no firm explanation for the three rods on the front of the crown, but wonder whether they are a reference to the three crosses of Calvary or to the Trinity (Father, Son, and Holy Ghost). This helmet was found in Zozocolco de Hidalgo, Veracruz. 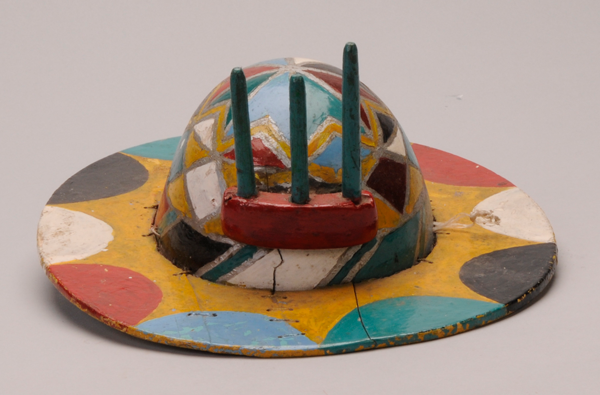 Here is the side view. 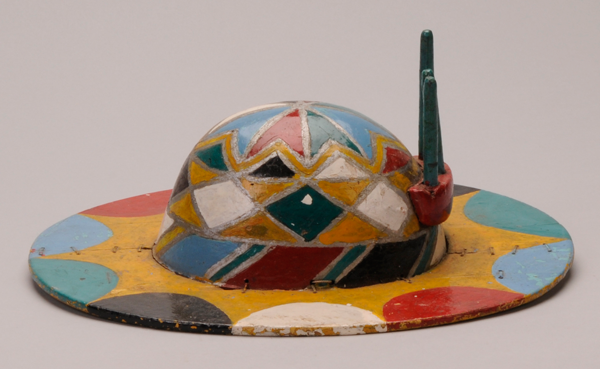 Like the helmet from Ixtepec, this one has also suffered splitting of the brim. In this case the broken parts were laced together. This lacing is well visualized from above. 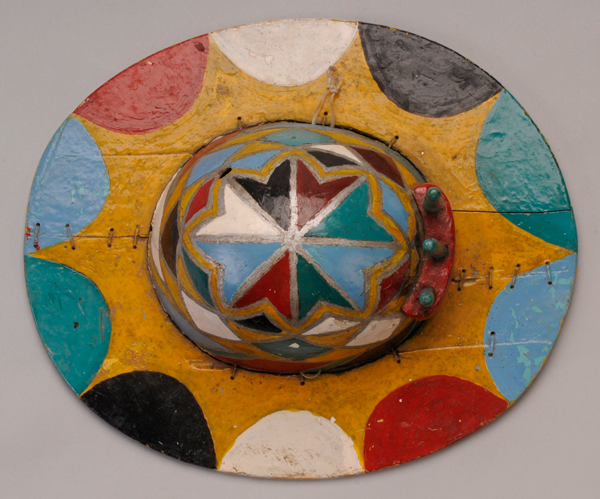 The last photo of this helmet is taken from below. One is surprised to see a completely different painted design there. We might interpret this as the sun shining on the flowers of the earth. 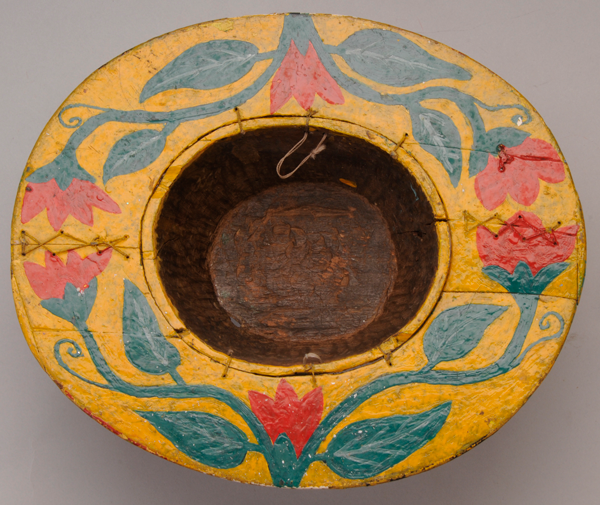 In this case the crown and the brim appear to have been carved separately and then lashed together with twine.

Santiago’s helmet can also take other forms. Here is a carved wooden figure of Santiago that was found in the Sierra de Puebla, from the collection of Vernon Kostohryz, to show another variation. 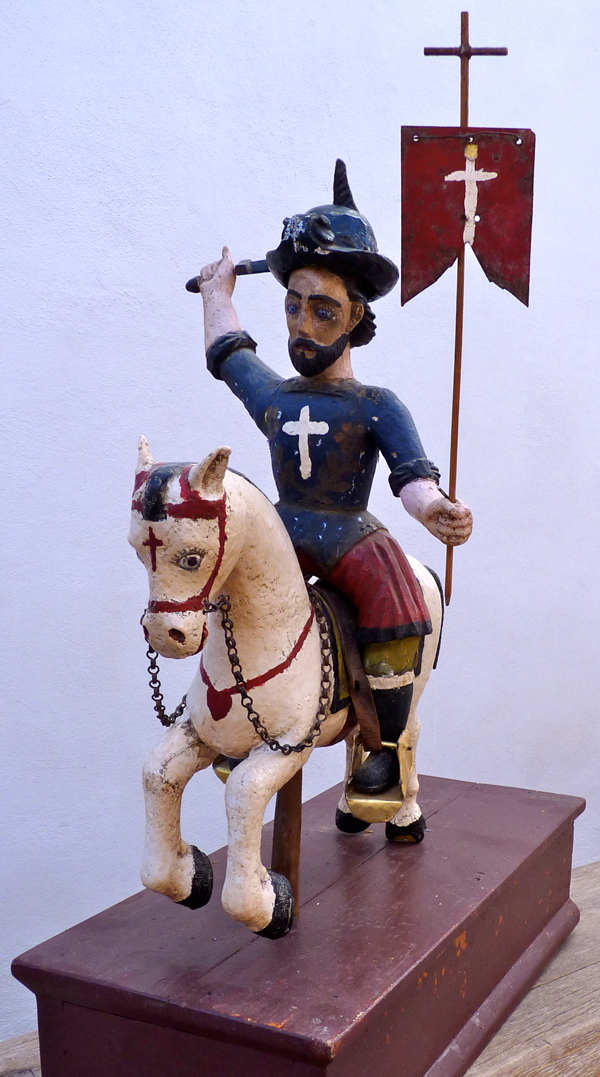 In this case Santiago is wearing a helmet of medieval form that can be worn by any of the archangels. Here is a wooden helmet from the Sierra de Puebla of this type that was probably worn by Santiago, although the dancers in the San Miguelitos dance also wear helmets of this form. The cross on the front leaves no doubt about the loyalty to God of the dancer wearing this helmet. 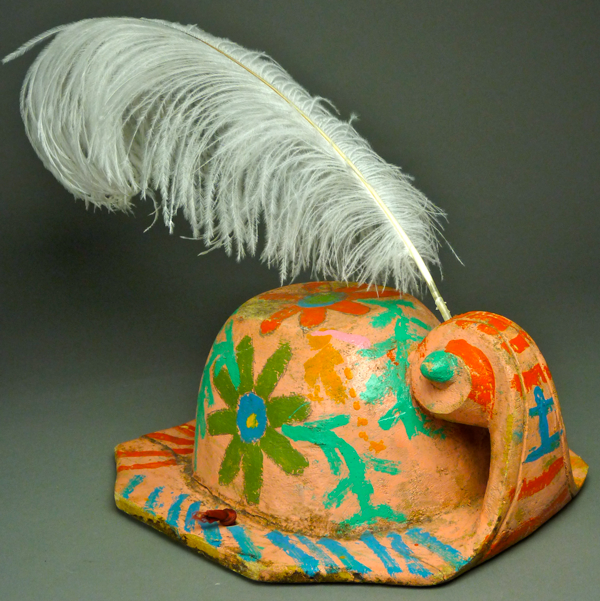 There was a stub of a broken feather mounted on the helmet when I first obtained it. I mounted the sort of plume that is typically found on helmets worn by Santiago. In the photo that follows one can see the remnants of the earlier feather. (One can also see how different lighting reveals different colors.) 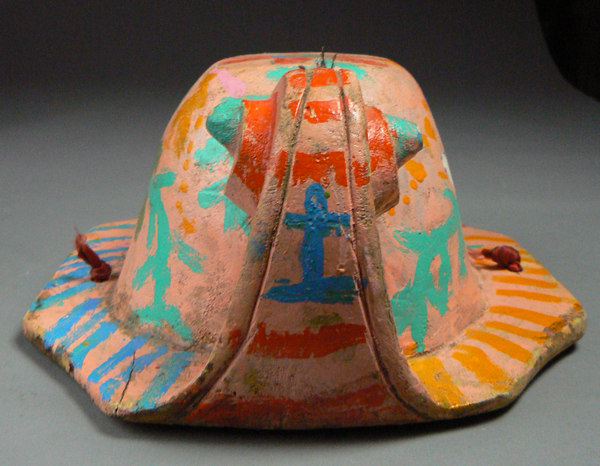 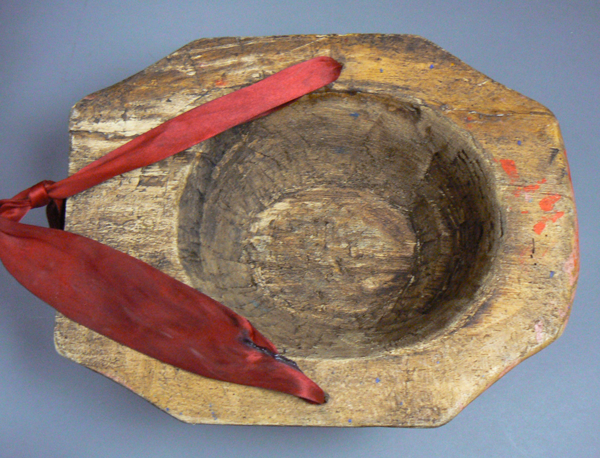 The bottom surface of this helmet is unpainted. The staining from use inside the crown is obvious, as is the staining of the ribbon/chin strap.

Here is another carved wooden figure of Santiago from Puebla in the collection of Vernon Kostohryz. This figure wears a similar helmet, although the turned up front edge is less dramatic. The horse is trampling to death one of the enemies of Christ, probably Pontius Pilate. Santiago always carries a cross. 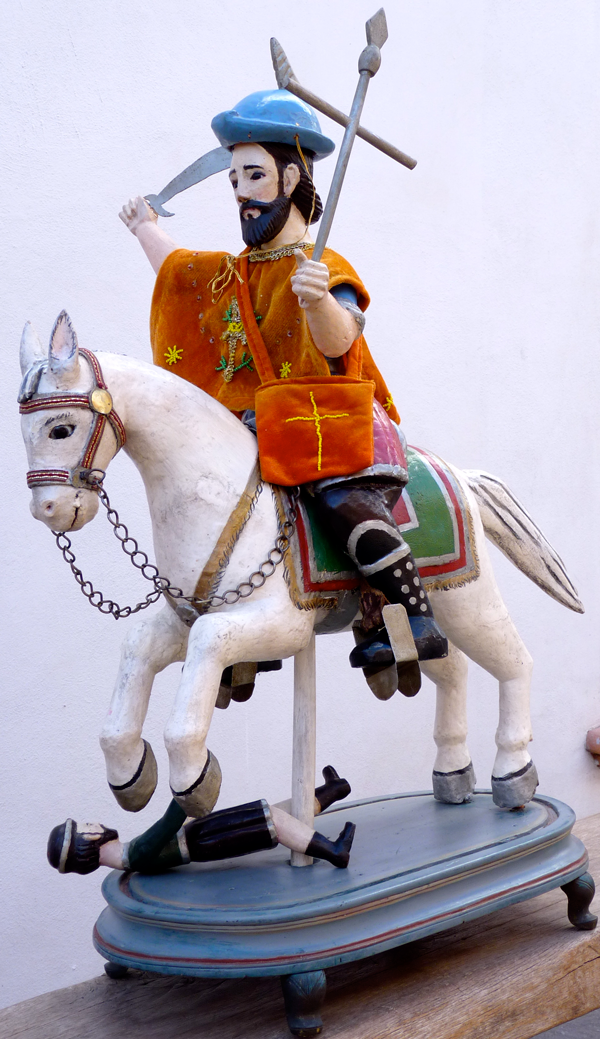 In an earlier post I showed yet another variation of Santiago’s helmet that represents a stylized version of this type. That was the helmet that accompanied the mask and dance horse from Papantla, Veracruz. 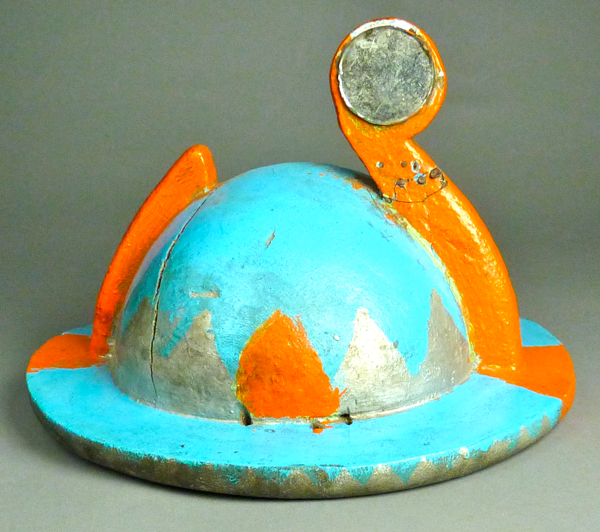 In summary, one of the wonderful things about Mexican dance masks and related dance accessories is their infinite variety.

In next week’s post I will discuss the Tastoanes Dance and its masks. In this dance Santiago is defeated and killed by a horde of barbarians, but then God restores him to health so that he can convert his attackers to Christianity.