My wife Lucy and I had visited Jaled Muyaes and Estela Ogazón just prior to November 1, 2001 for a very special reason; we planned to attend Todos Santos in Hidalgo and Estela had asked to accompany us. She had, of course, made this trip many times before with Jaled, but he was content to stay at home. As it happened, we saw Xantolo dancers but we did not see Juanegros. On our return, Jaled brought out a box containing an unusual set of masks. These were Juanegros, he said, but they resembled the characters in the Manueles dance, in that the rivals were accompanied by their parents, and all had Caucasian faces. So the set included two younger men, one serious and the other silly, along with two older couples. There was not a mask for the woman being courted and I don’t know if that character was masked or unmasked in the dance. Jaled did not know the name of the place where these had been made and used; he could only say that they were from Hidalgo or Veracruz. Later I picked up another pair of the parent masks, which were obviously by the same hand, on EBay™, and one of those had HG7 written on the back. We will later observe that these masks are similar in style to those of El Higo, Veracruz, so HG may be code for El Higo. They are obviously rare and unusual. Here is the mask of the serious suitor. 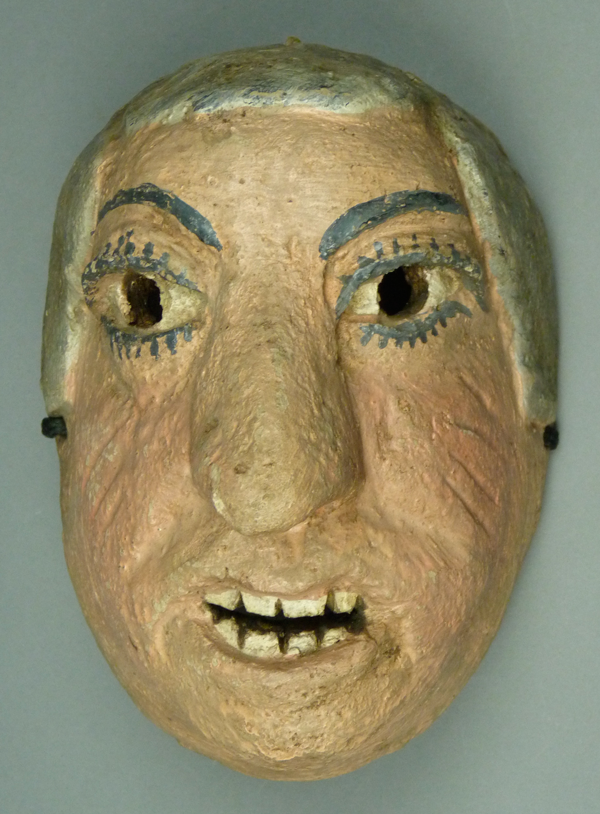 One can’t help noticing that these suitors are depicted as old and worn, with gap teeth and oversized noses. 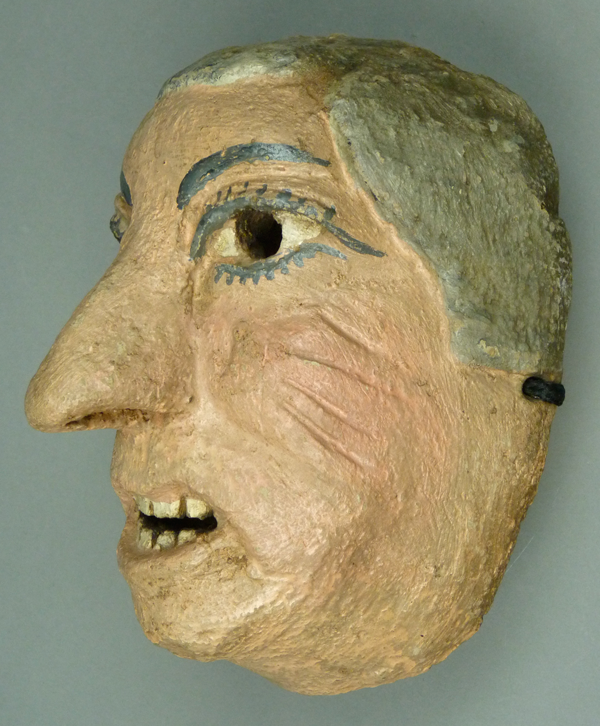 The treatment of the eyes and the sideburns does vaguely suggest that these are Juanegros, or at least that they come from the same place. This mask is 7 inches tall, 5¼ inches wide, and 4 inches deep. 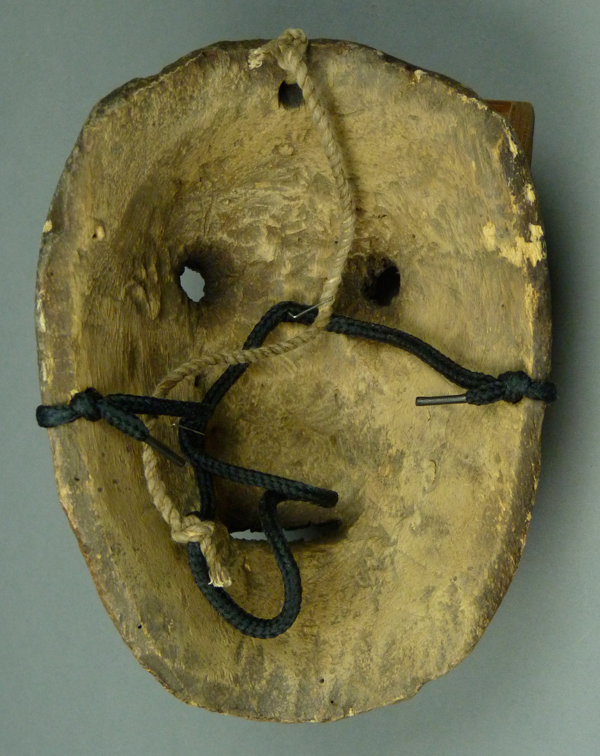 There is no question that these masks have been danced.

And here is the suitor with a silly expression on his face. 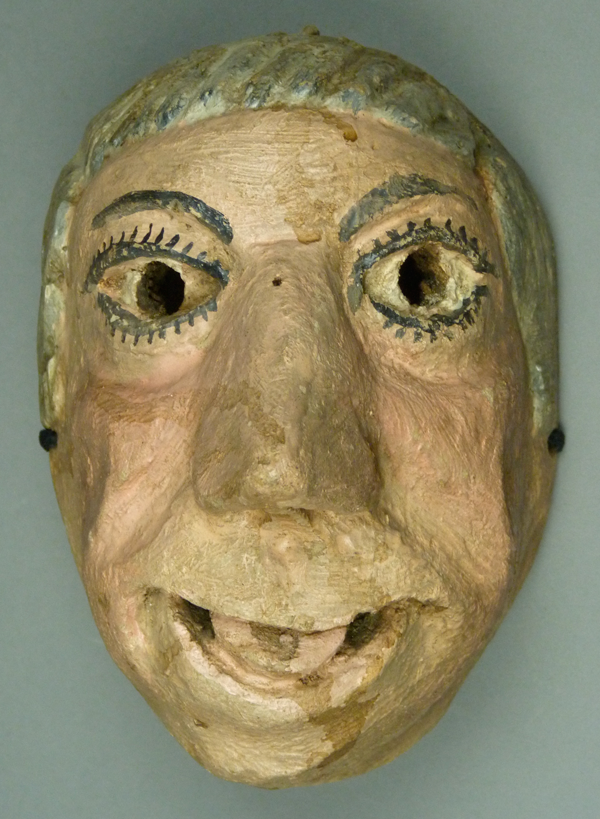 Can you picture this fellow courting your beautiful daughter? 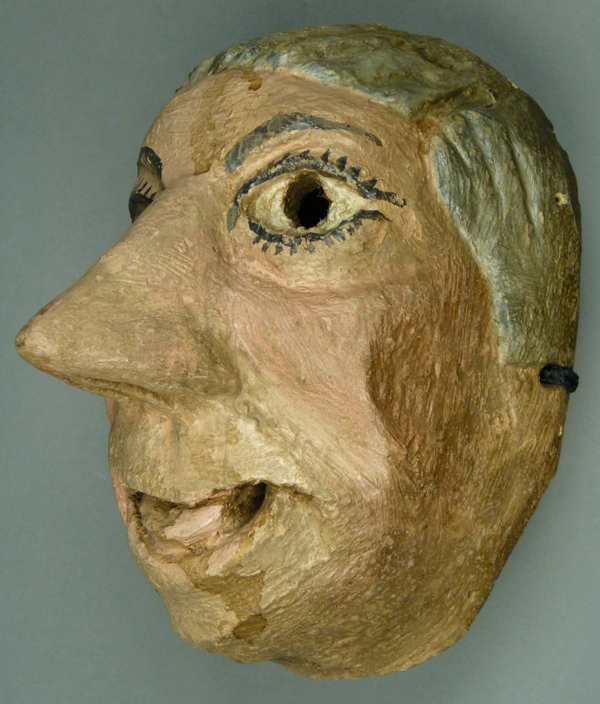 His features are stereotyped to suggest that he is foolish. This mask is 7¼ inches tall, 5¼ inches wide, and 4¾ inches deep. 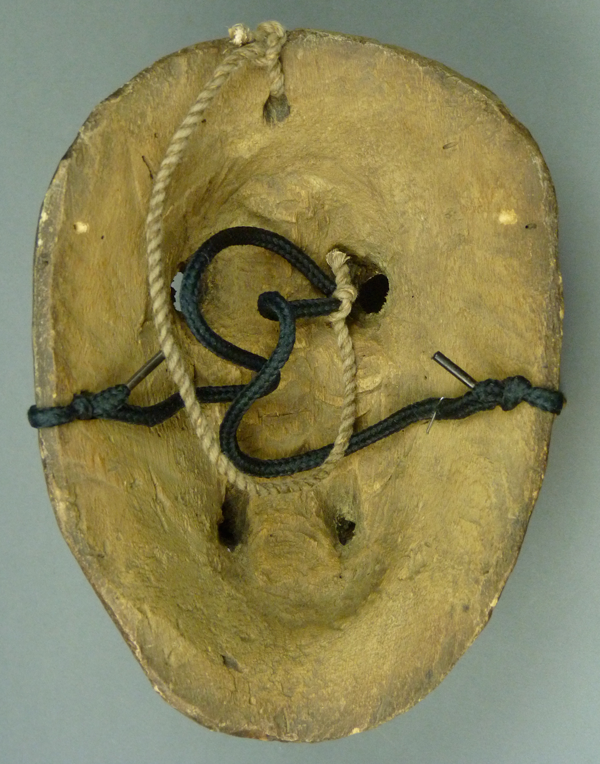 The back of this mask tells us, once again, that this character has had a long and distinguished career during many rounds of the Todos Santos celebration.

To briefly review, published accounts of the Juanegro dance emphasize that this depicts a romantic triangle; two men are vying for the love of the same woman. Typically one of the rivals is a Spanish landowner while the other is his African Overseer (his slave), suggesting that this is a dance drama about power, justice, love, and ethics.  In some Veracruz villages there is a fourth dancer, el Viejo (the old one) or el Abuelito (the grandfather), wearing a mask that depicts an old man. His relationship to the plot about the love triangle is unclear.

The Juanegros dance is performed on several days around Todos Santos (November 1, the “day of the dead”) as an integral part of the Xantolo dances of that occasion. The Xantolo dancers, who are actually called Viejos and Viejas, or similar titles, portray dead people, as if to offer a visible marker for the invisible souls of the dead who have been invited to visit their living relatives during Todos Santos. It is far less clear whether the Juanegro figures may also be portrayals of the dead, and I have found no published statement that addresses this question.

Today’s set of masks would seem to reflect an evolution in the Juanegro dance to a new version. A humorous aspect of this evolution is that the sons are depicted as middle aged while their parents seem even older. In other words, they all appear to be Viejos and thus their status as possible representatives of the visiting dead is more strongly suggested.

I will repeat a link from an earlier post that shows a trio from the Viejada dance (Xantolos) in El Higo, Veracruz, whose masks do not look very different from the masks we are looking at in today’s discussion. The arch behind the three figures is an important symbol of the Todos Santos fiesta, and represents “the constellations and the thirteen skies that exist in the symbolic world of the Aztecs, each accompanied by the corresponding gods” (Day of the Dead in Mexico, by Mary Jane Andrade, 2002, page 108).

Masks of the two sets of parents follow. I have arbitrarily organized them into couples. The father of one of the suitors will lead off. He is balding, gap-toothed, and he has an over-sized nose. 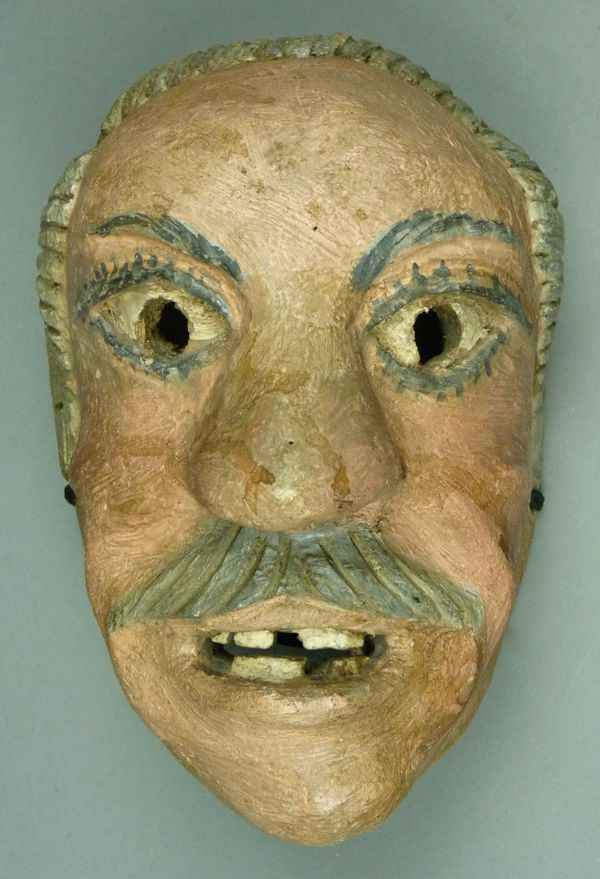 This mask demonstrates worn paint on the face. 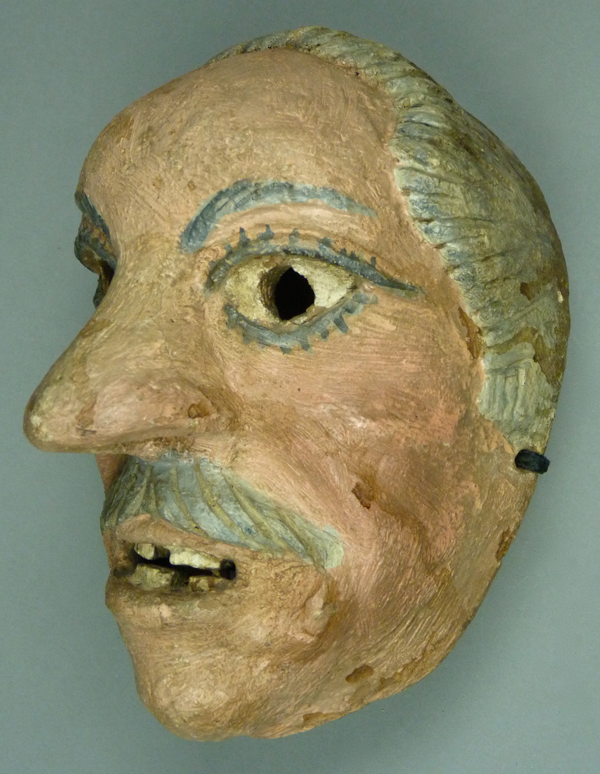 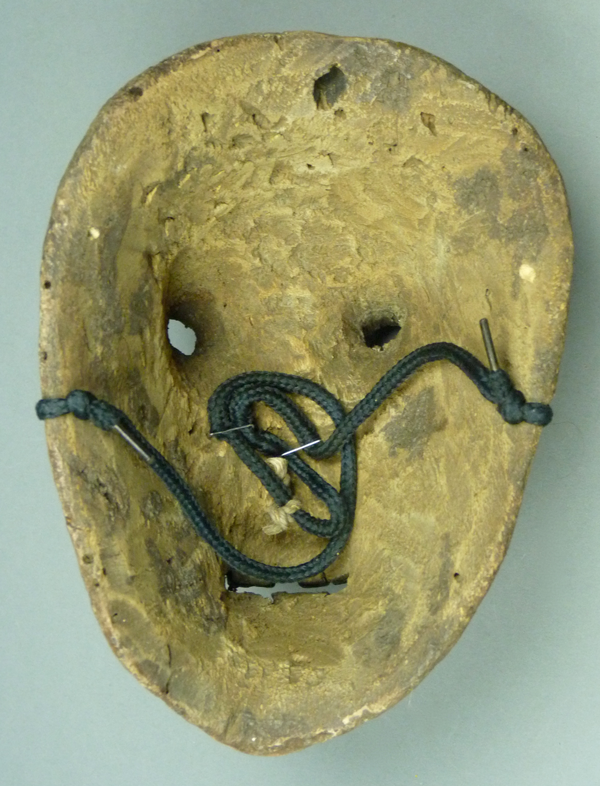 The back is worn as well.

Here is one of the mothers of the suitors. She is more or less equally stigmatized. 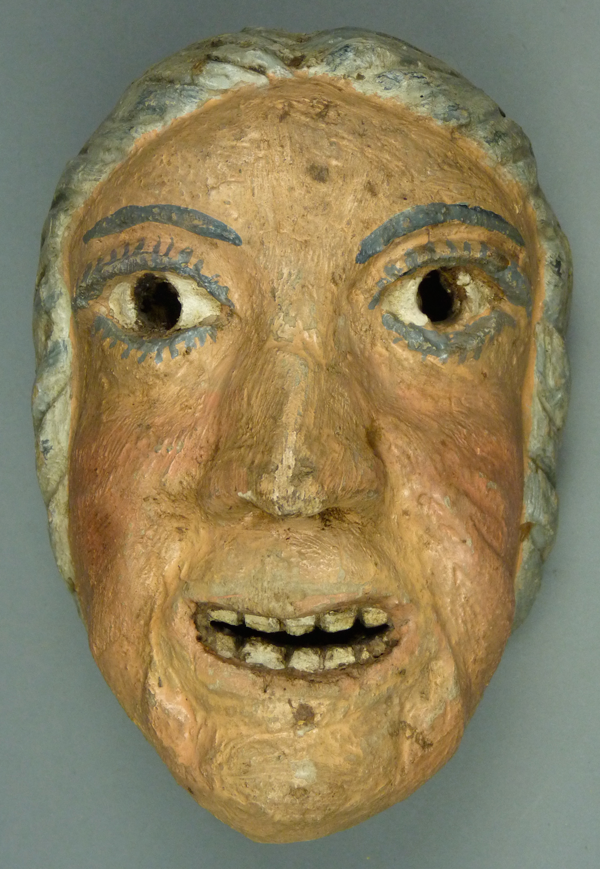 If one wore this mask in the United States at Halloween, the wearer would be readily labeled as a witch. 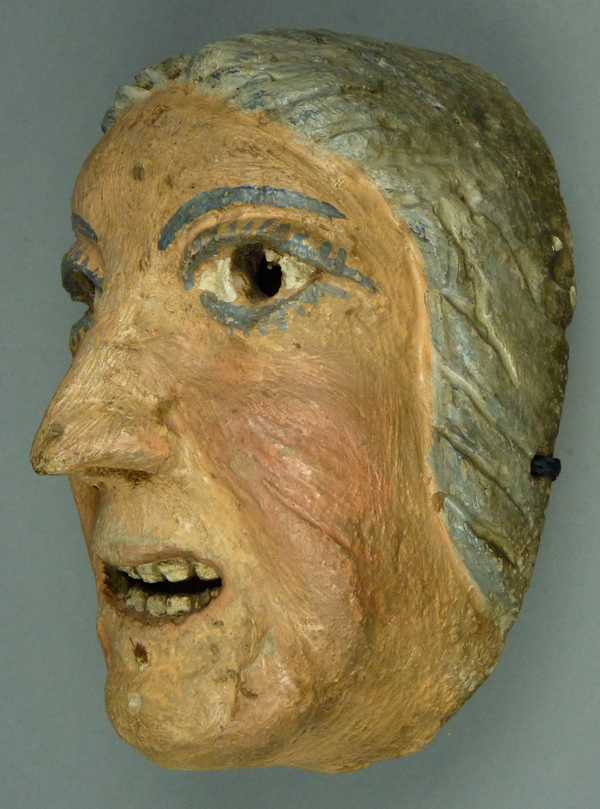 These photos fail to capture the depth of her wrinkles. This mask is 7½ inches tall, 5 inches wide, and 3¾ inches deep. 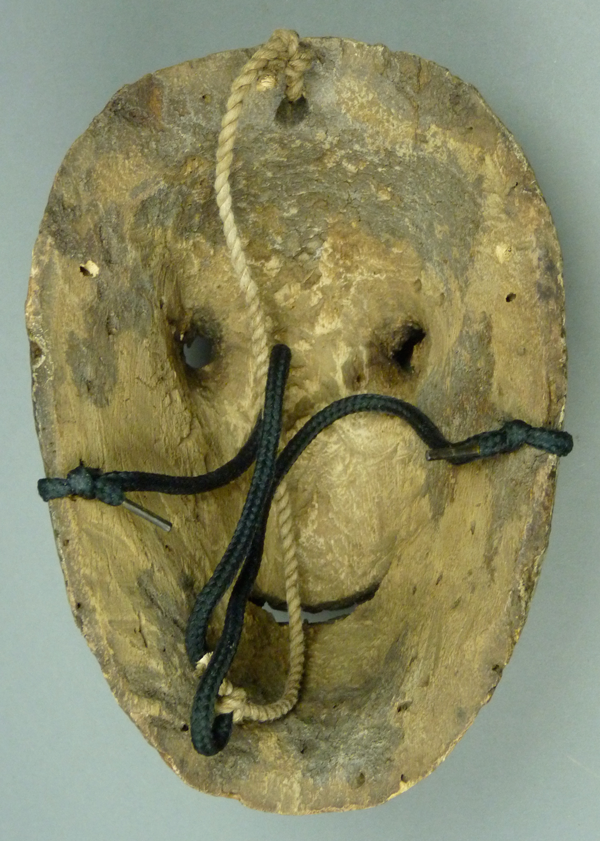 This is another worn back.

Here is a second father mask. His nose is unusually broad instead of unusually long. 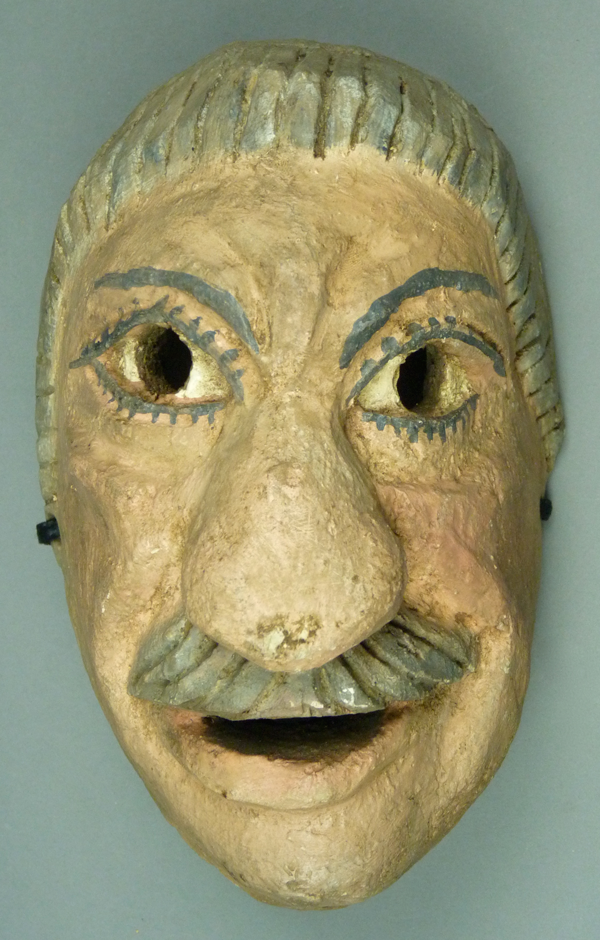 He has a jocular expression. 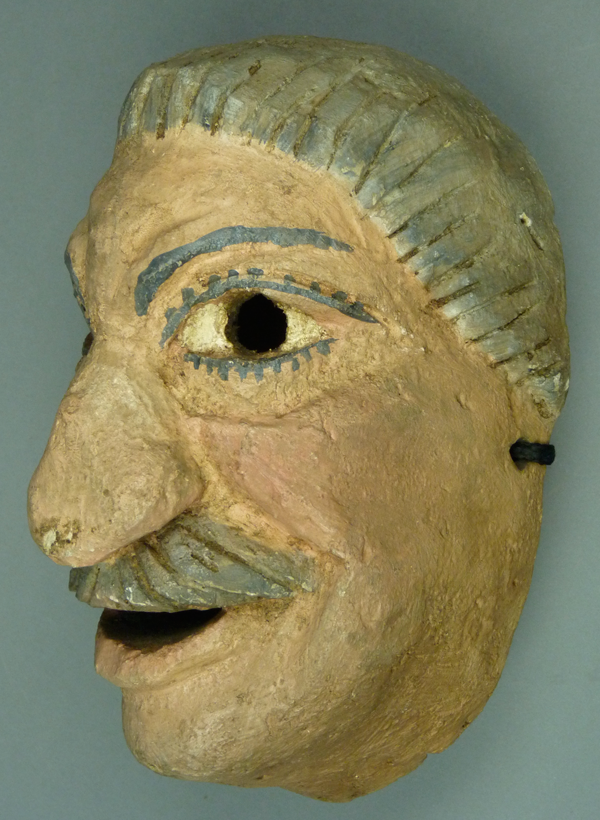 All of these masks have rosy cheeks, a quality we will observe again in next week’s masks. This mask is 7¾ inches tall, 5 inches wide, and 4 inches deep. 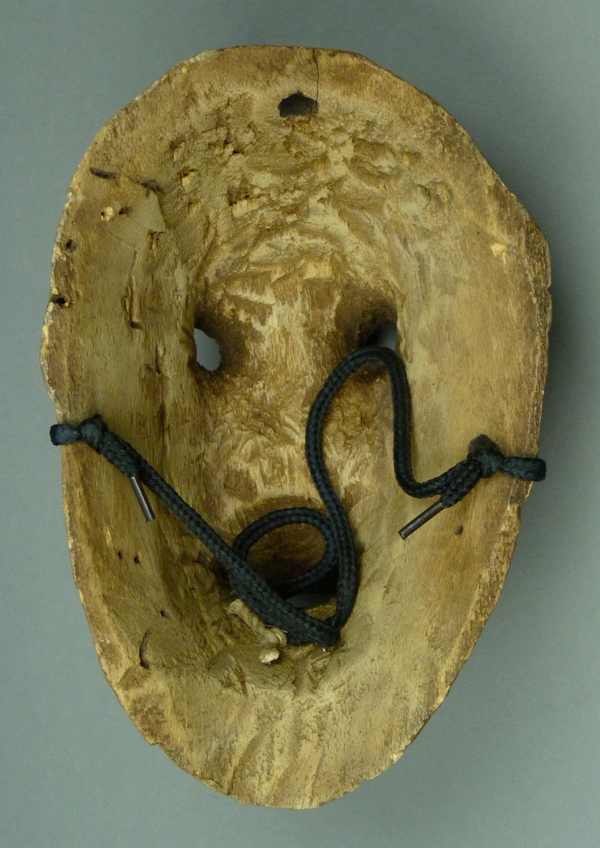 All of these masks seem equally old and worn.

Here is the second mother mask. She seems suspicious or apprehensive. 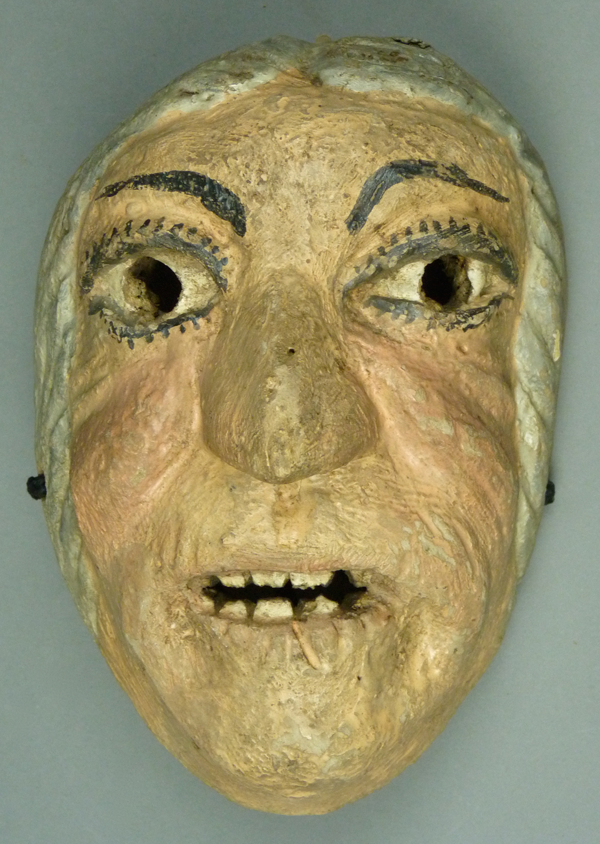 Perhaps she is worried about the outcome of the suitors’ efforts. Another possibility is that she is intended to convey the look of an elderly person who is confused. 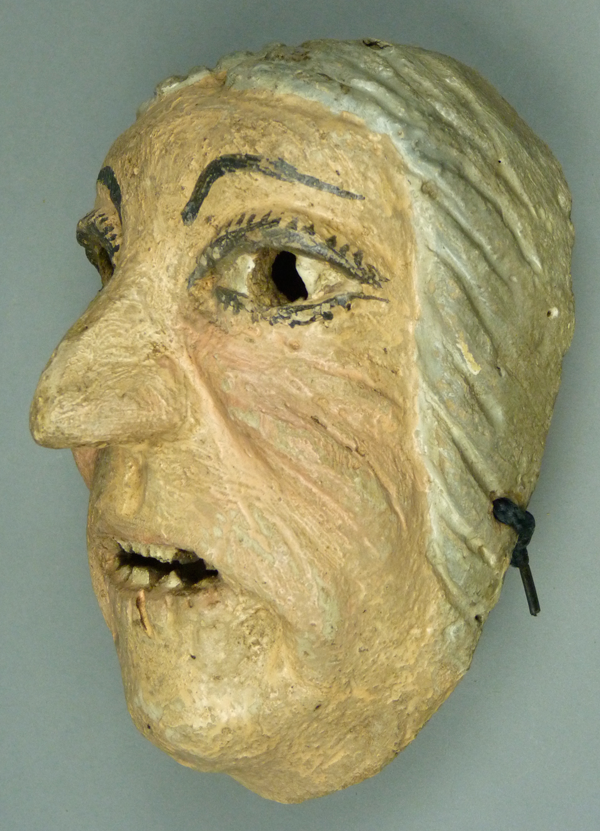 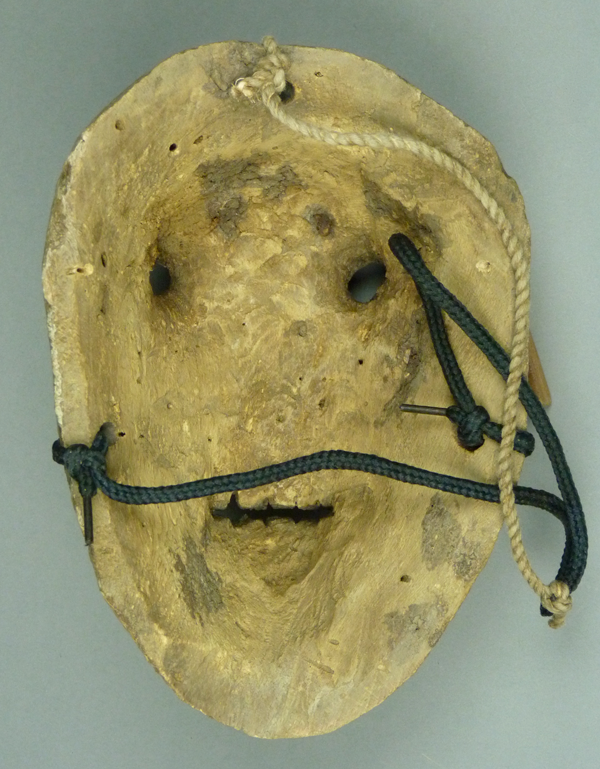 This staining of the back seems irregular.

Finally, here is a third couple, evidently by the same hand, that I found on EBay. I couldn’t resist them because the male mask had such an amazing nose. Of course I don’t know whether they were once part of the same dance group. If they were, then I have added parents for the woman being courted. Here is the old gentleman with the impressive nose. 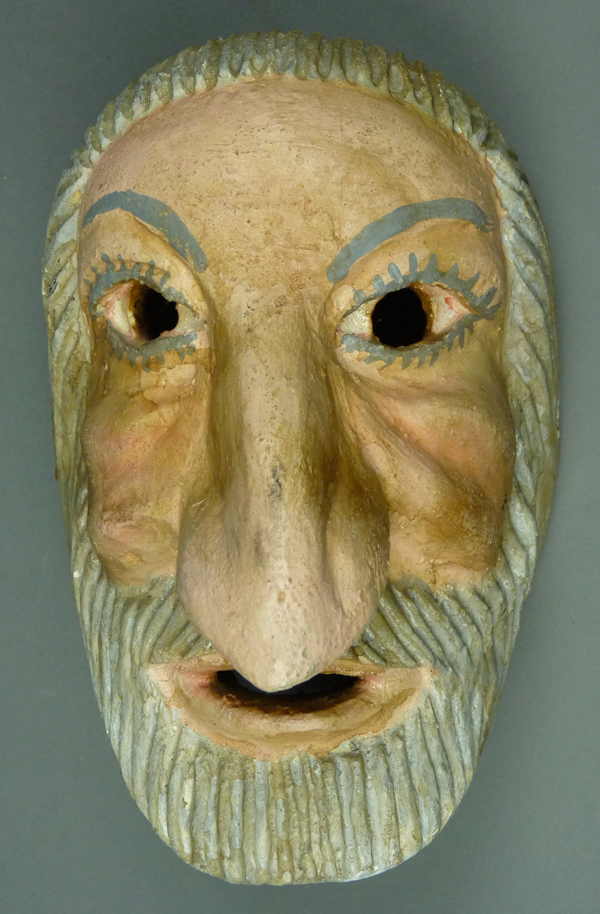 His expression is difficult to read. 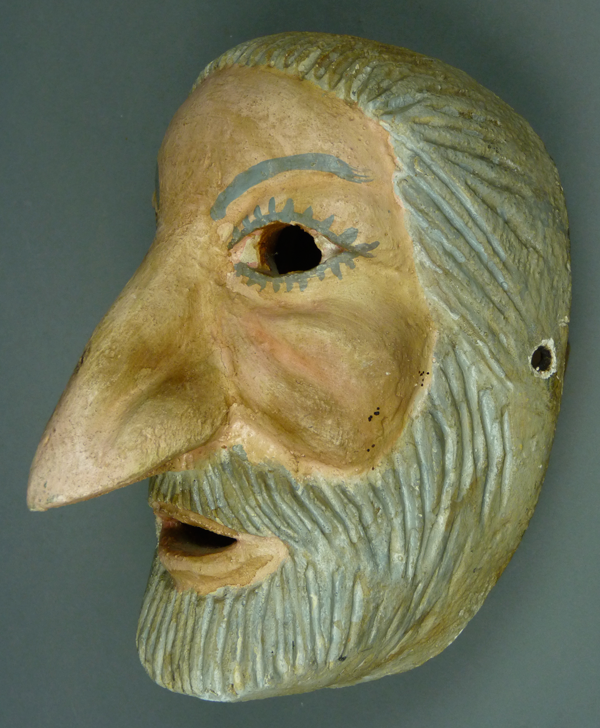 Do you suspect that this old gentleman might stick his nose into other people’s business? This mask is 7½ inches tall, 5¼ inches wide, and 5 inches deep. 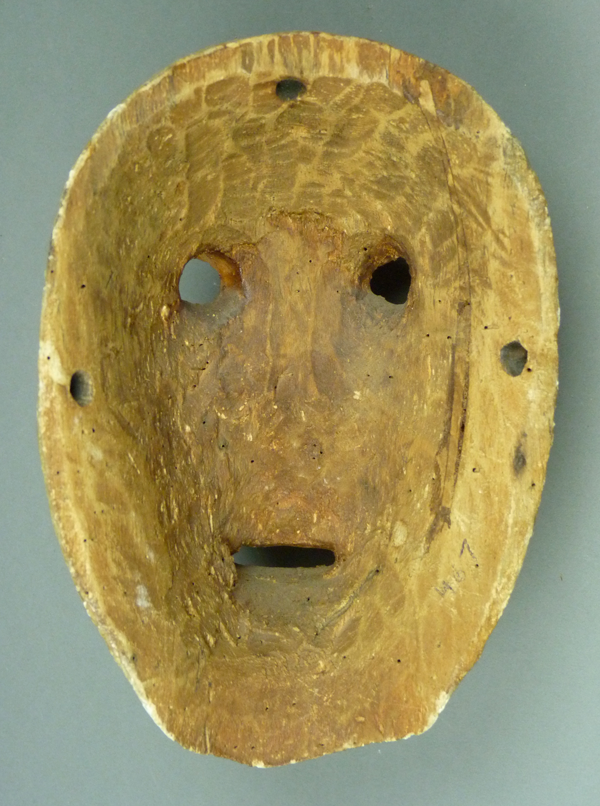 Someone wrote HG7 (perhaps El Higo mask #7) on the back. This is another old mask.

Here is this old man’s wife. The paint on her face has suffered some damage. 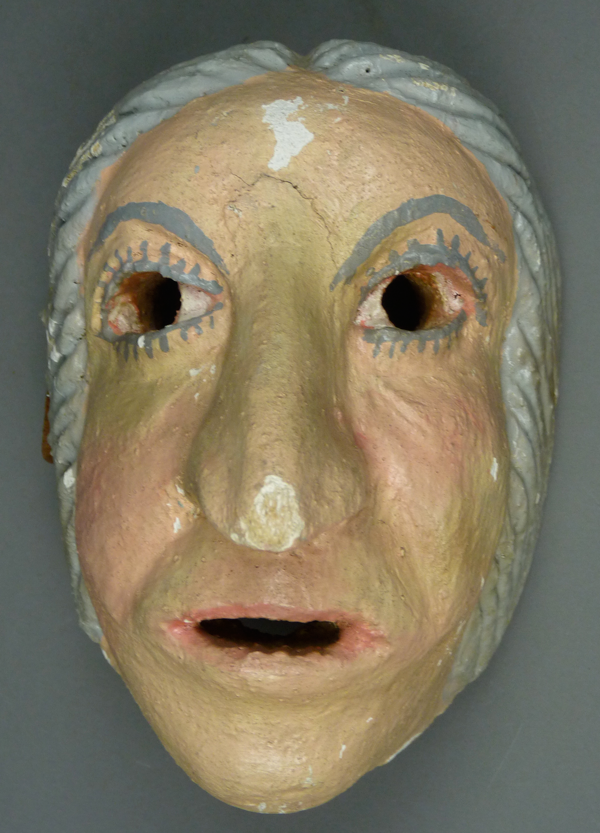 It is particularly clear from an inspection of this mask that it was carved and sanded, but then prepared for painting with a base coat of plaster of Paris, or gesso. This was a classic technique in Mexico until recent decades, when commercial paints became so widely available. This observation suggests that these masks are probably not very recent; maybe they date to the mid 20th century. 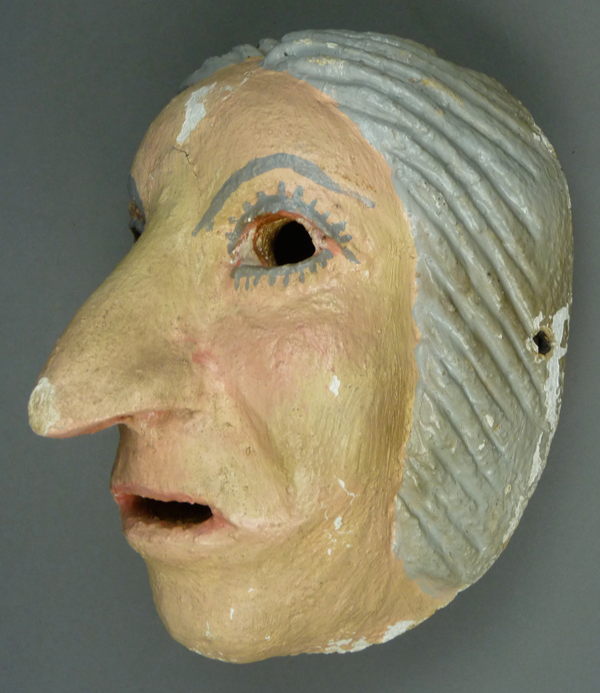 This is yet another long nose. The mask is 7¼ inches tall, 5¼ inches wide, and 4¾ inches deep. 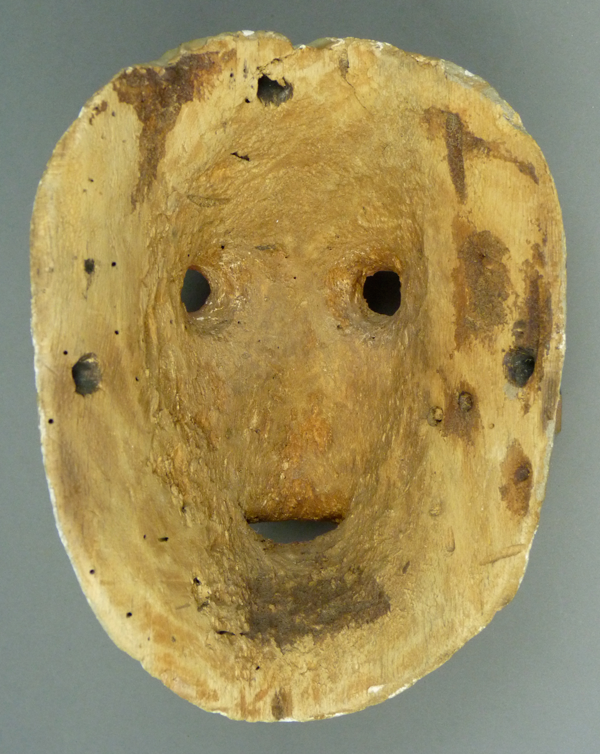 This back has been sanded, so the staining from use is much less apparent. The center of the back is undisturbed and demonstrates how the wood has darkened from contact with the air over a period of decades.

Next week I will show another group of masks that may be by the same hand, however I have concluded that this group are Viejos for the Xantolos dance. These were found by Dinah Gaston in the Huasteca.