This week we will examine several more older masks from the Mexican state of Michoacán. These three are all from Tarascan Indian towns.

Such impressive older Diablo masks are not so easy to find, and a year went by between the time I bought the first one and then the second. I had never realized until I sat down to write this post that, although the first appears to be older than the second, they are by the same carver. I will begin with one that I bought from Jaled Muyaes and Estela Ogazón in July, 1997. I wrote down that Emiliano Fernández was the carver and neglected to note the name of his town. Then when I saw how obvious it was that he had also carved the second mask, I finally learned the name of the town—Angahuan, in the Municipio of Uruapan.

Angahuan is a short distance from a nearby smouldering volcano, Paracutín.

Here is this old and wonderful Diablo carved by Emiliano Fernández. I have no information about its age but I believe that it dates to 1960 or earlier. It could easily be much older than that. The wooden horn is an obvious replacement. I call your attention to the delicate and artful carving, for example that of the eyes and vision openings. This is the work of a great master, but he worked at a time when such artists had only limited exposure to the larger world. 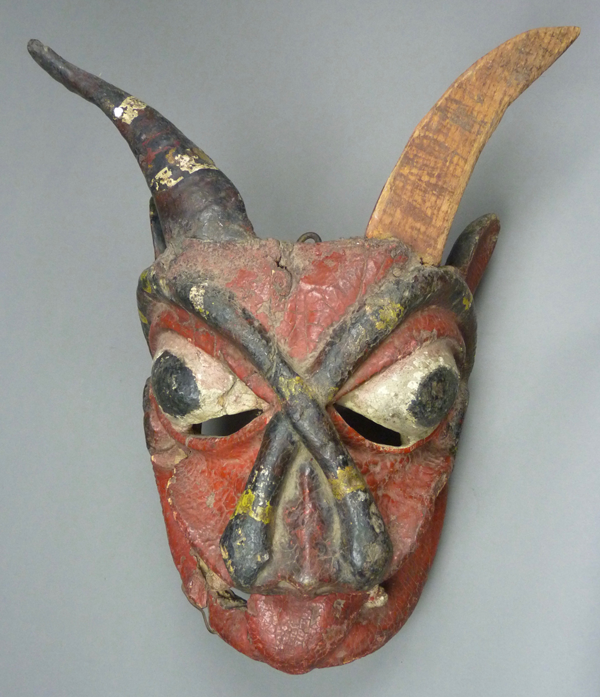 In this example the two snakes are crossed rather than intertwined. Note that one can see carved eyes on the snake to the viewer’s left. 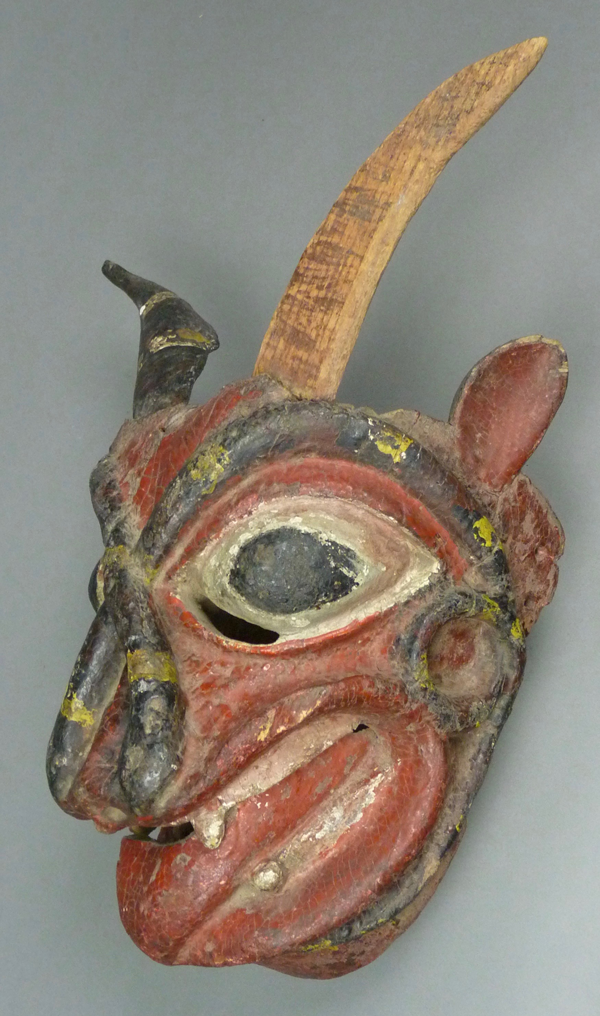 From the side, one can better appreciate the delicacy of the carving of the eyes and related vision slits. In addition, notice that the bodies of the snakes form a loop, an unusual touch that may be unique to this carver. Also evident are the beautiful sculpting of the teeth, mouth, and the broad extended tongue. 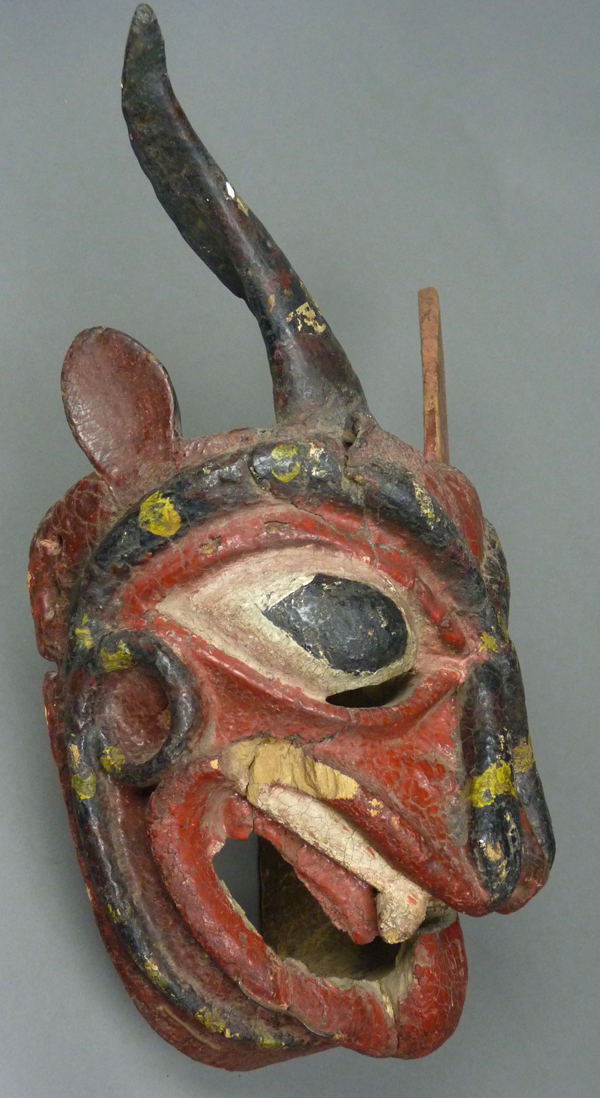 On the right side, a part of the tongue and lip have been broken. 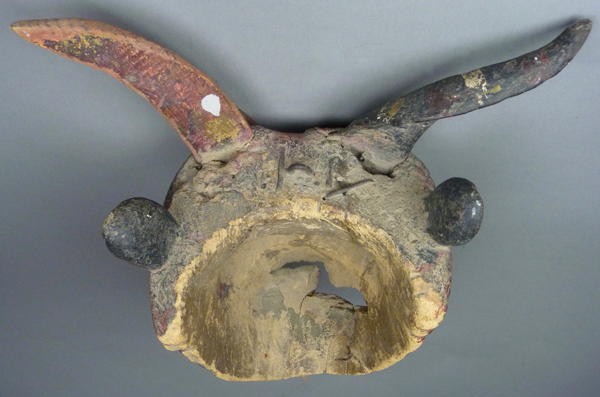 Looking at the flat top of the rim, there is an iron staple in the center to anchor a strap or cord. This staple is flanked by three others that have been applied to hold the top of the mask together, in response to a splitting crack. 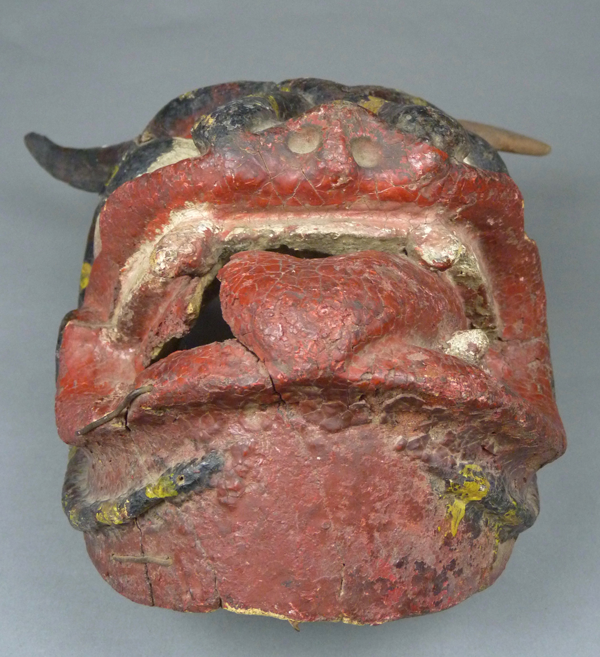 From below, one can observe the great beauty of the carved tongue, marred by breakage on the viewer’s left. The wear on the paint is, of course, extreme. 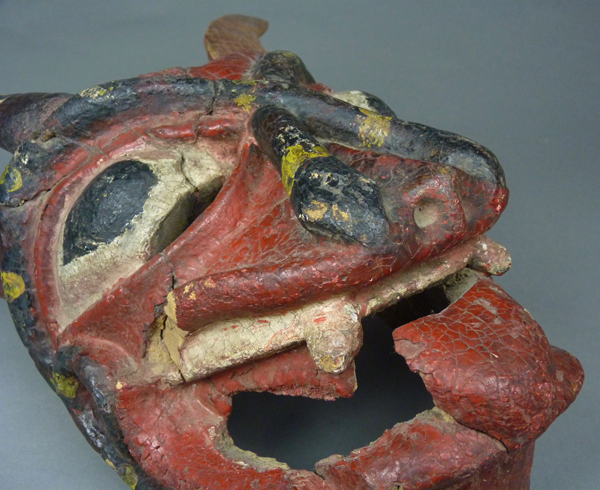 Here’s looking at you, says one of the snakes. This mask is 11 inches tall, 9 inches wide, and 5½ inches deep, including the ears and excluding the horns. With the horns it is 14″ tall. 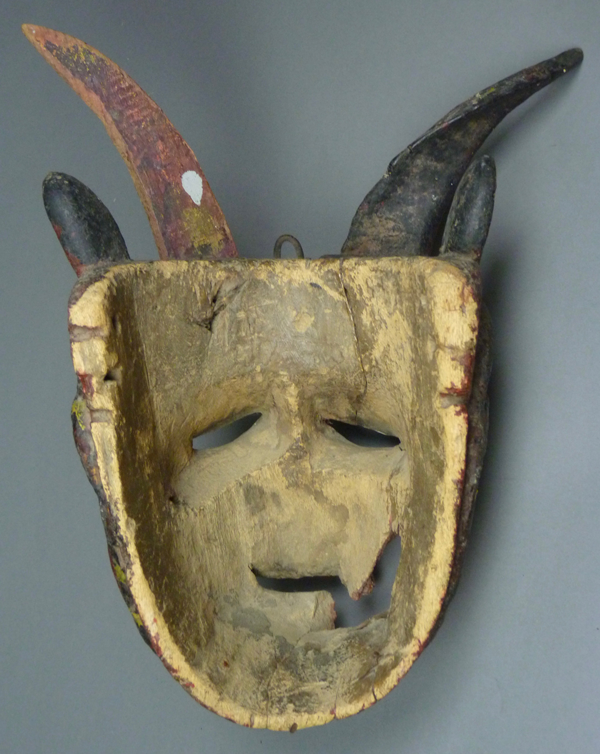 The back looks as worn as the face. Several string holes have worn out from use.

I purchased this next mask from Jaled Muyaes and Eastela Ogazón in July, 1998. They were told that it was worn by a particular devil character—”Astucia” (guile or cunning, deceit), and that it was carved by Emiliano Fernández, from Angahuan, Michoacán. 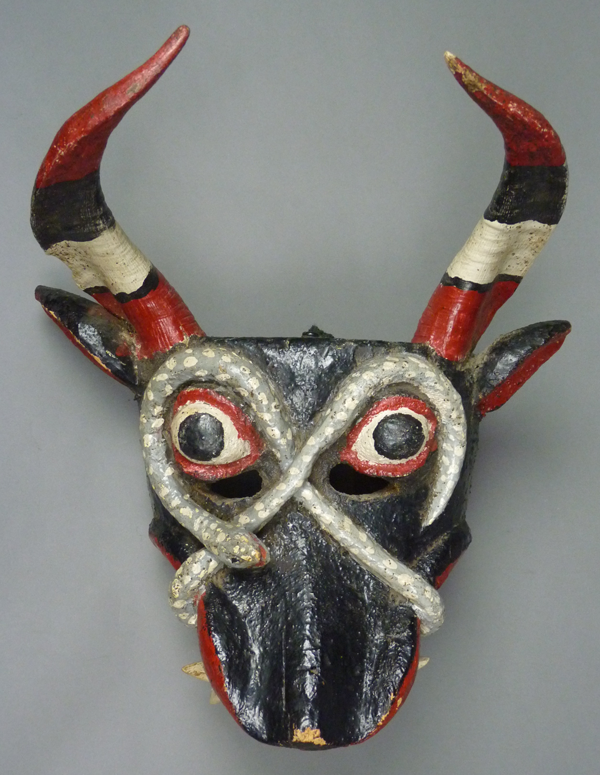 On this mask a single green snake loops arond the face. The eyes and mouth of this mask closely resemble those of the last, above, although they are not so delicately carved. 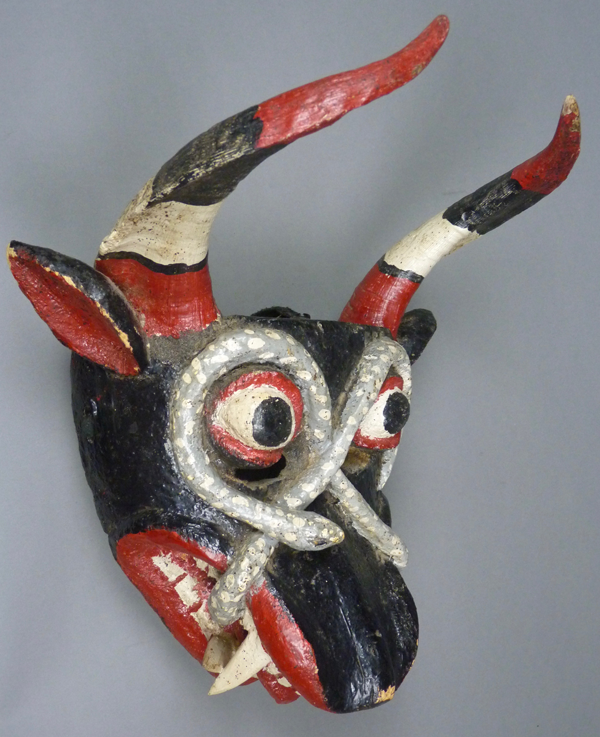 Both horns are intact. There are no broken areas. 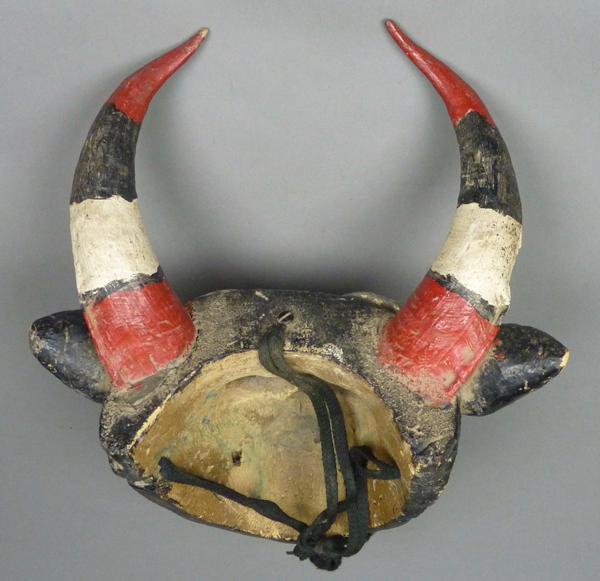 There are no metal staples necessary, because on this mask there are no cracks. 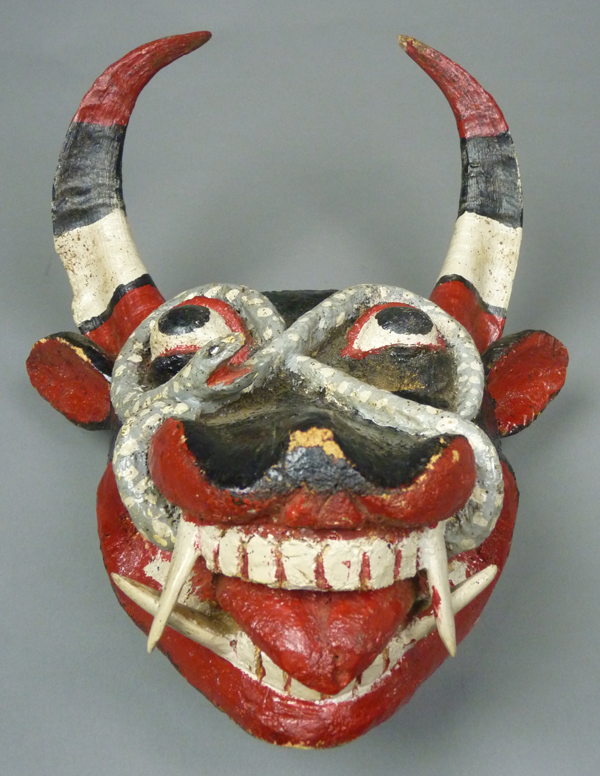 The intact tongue is virtually identical to the tongue on the first mask. Look at the open mouth of this snake!

This mask is 9 inches tall, 12 inches wide ( including the ears) and 4 inches deep, excluding the horns, which add several inches in all dimensions. 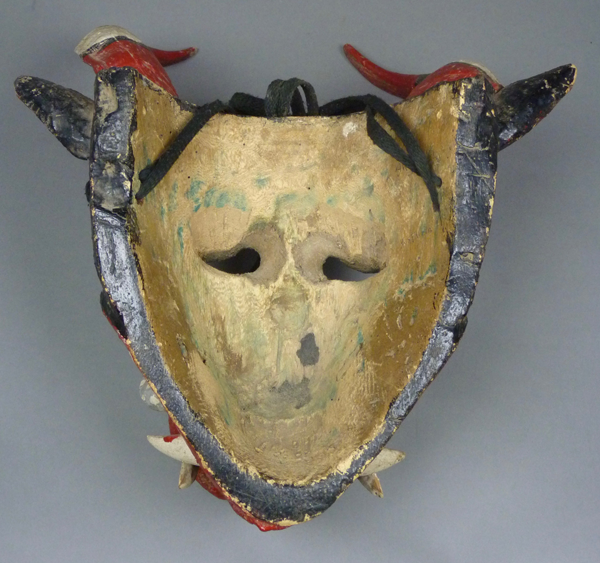 The back is similar to that of the other mask and also displays considerable wear.

In Donald Cordry’s Mexican Masks (page 65, plate 87 center) there is a mask that was collected by that author in San Fransico, Michoacán (probably San Francisco Uricho, a Tarascan town that is about 64 miles east of Angahuan). Comparing that mask to the one above, it is obvious that Emiliano Fernández also made Cordry’s mask.

Our third mask, which is different from any that we have seen in this series of posts, was collected by Jaled Muyaes and Estela Ogazón in Tocuaro, Michoacán. What makes this Diablo particularly unusual is that the articulated jaw is attached to the rest of the mask by a wooden hinge. The original lower jaw was apparently damaged and replaced, as it is obviously not by the same hand. This is a very old mask, which probably dates from the mid-20th century or earlier. In its simplicity it is unlike those in current use in Tocuaro. In more recent years the dominant carver in Tocuaro had been  Juan Horta Castillo, famous for the elaborate nature of his masks; some of those actually appear to be too fragile for ceremonial use. Juan died in December 2006 and his sons appear to have taken his place among the current community carvers in Tocuaro. 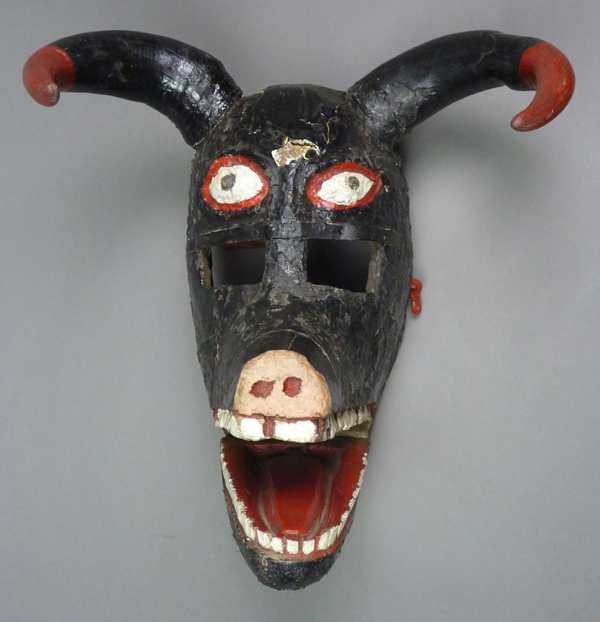 This mask has evidence of extensive repairs. The band visible under the eyes, which is made of tin, is one of three horizontal straps that bind the mask together. 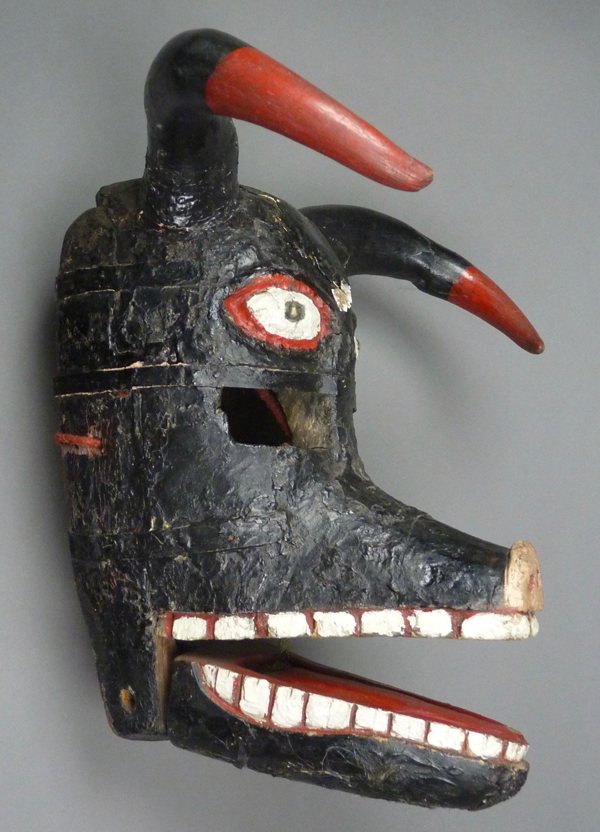 From the side, one can see all three of the tin straps, and the differences in age and style of the upper and lower jaws can be observed. The back of the lower jaw narrows to a tenon that fits into a mortise formed by the two sides of the mask. A wooden pin holds the lower jaw in place. 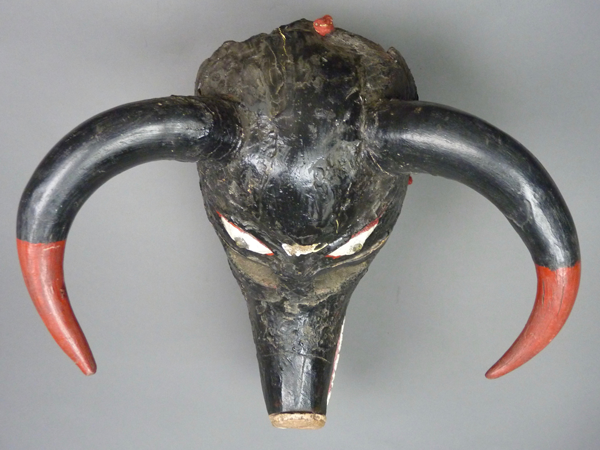 Seen from above, the mask has a dramatic shape. 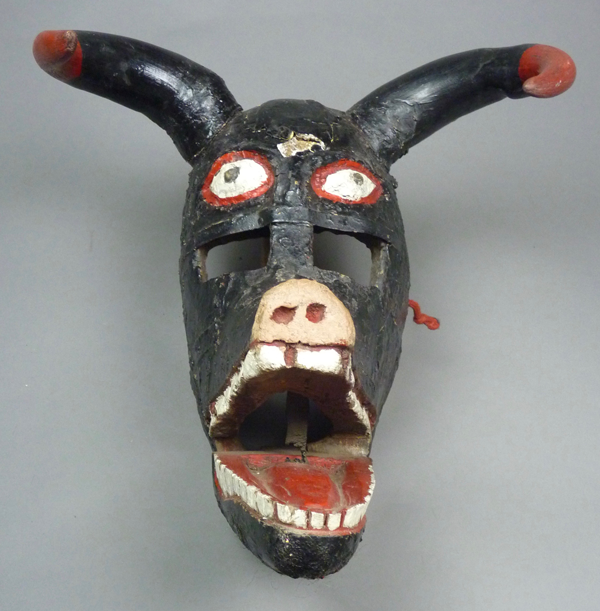 There is a relief carved tongue on the floor of the lower jaw. This mask is 12 inches tall, 6½ inches wide, and 8½ inches deep, excluding the horns. There is a 9½ inches gap between the tips of the horns. 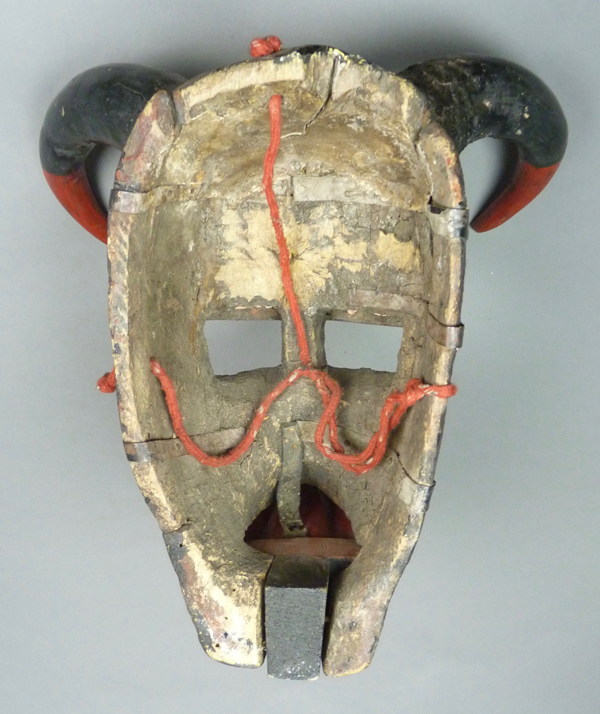 From the back, one can see the arrangement of the mortise and tenon joint that permits the lower jaw to open. A leather strap suspends the jaw in a neutral position so that it can bounce open and closed as the dancer moves. The age of the back and the lessor age of the lower jaw are obvious.

Next week we will look at a few more Diablo masks from Michoacán before we move on to some similar masks from the neighboring state of Guanajuato.