Many older Pastorela Diablo masks from other areas of Michoacán are larger than those we have examined thus far. Furthermore, the Pastorela Diablos from Guanajuato are also generally larger, more or less on the same scale. Some of these larger Diablo masks are characterized by prominent intertwined snakes that are wrapped around the entire face of the mask. Over the next few weeks I will show a number of these larger masks from Michoacán and Guanajuato, at least three each week.

The first mask was collected in San Nicolás Obispo, a town in the Municipio of Morelia.  Morelia, the county seat of that municipio, is a Spanish colonial city in northern Michoacán. All three of today’s masks come from this northern area, where there are few Tarascan Indians and the inhabitants are mostly Mestizos. The Pastorela performance was introduced by missionaries from Spain, supported by Spanish settlers, and adopted by the Tarascan Indians. It is paradoxical that such Spanish traditions are sometimes maintained most strongly by Mexican Indians, while the Pastorela has remained popular in Michoacán’s Mestizo communities as well. Unfortunately I have not found video recordings of the Pastorela in these northern towns.

I purchased this mask from the Cavin-Morris Gallery (in Manhattan) in 1995. I feel certain that it was carved in the mid-20th century, and probably collected in the field circa 1970. A pair of rather large snakes loop around the face. Vision openings for the dancer are tucked unobtrusively between the oversized carved and painted eyes. One of the snakes does double duty as the devil’s nose. 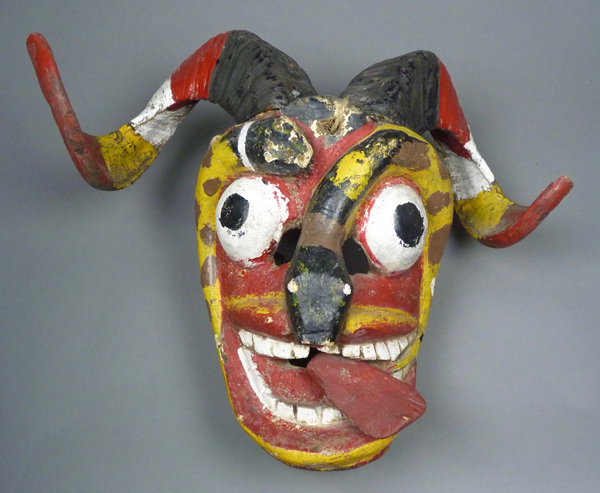 The tongue on this mask is a separate wooden element that is nailed to the lower jaw. 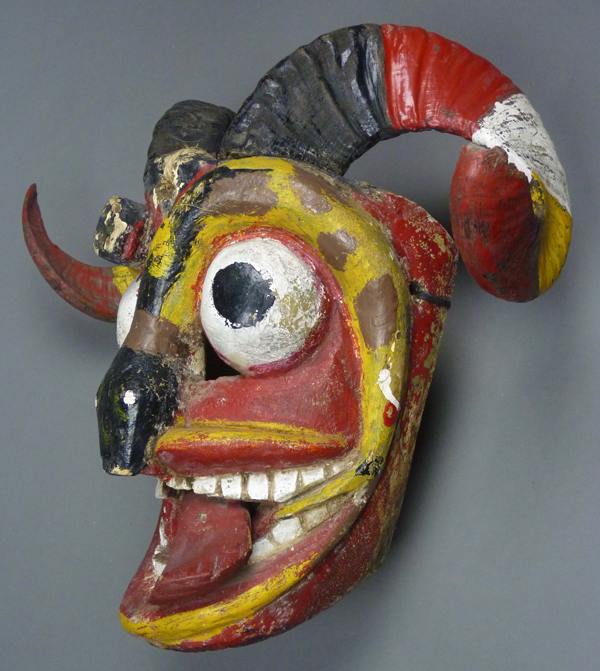 The tip of the left horn has broken off. 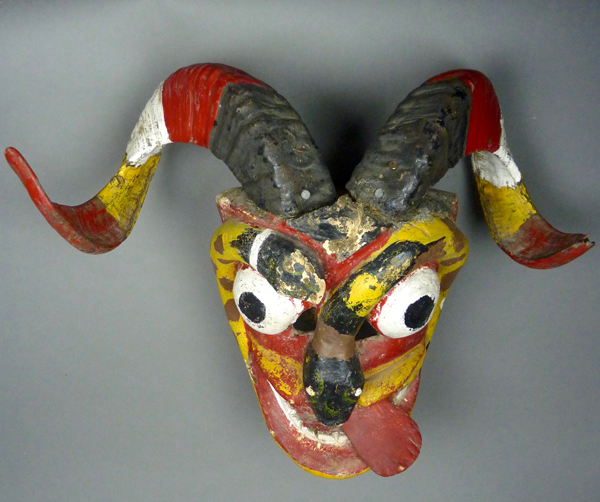 The mask has probably been repainted several times, but the area under the chin is worn, as if this might be the original paint. 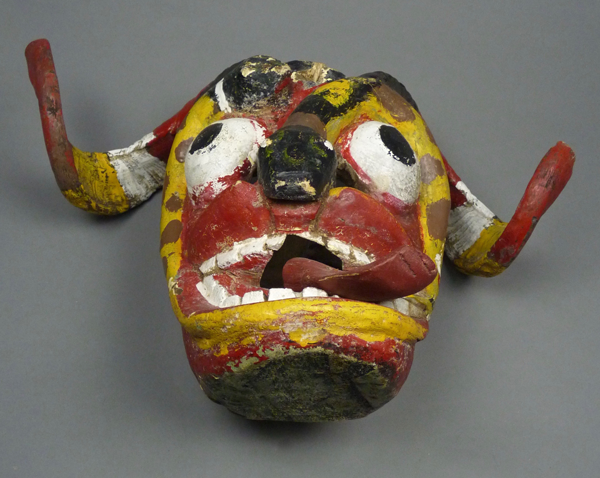 This wooden mask is 10½ inches tall, 8½ inches wide, and 6 inches deep, excluding the horns. The tips of the horns span 14 inches and the curling horns increase the height by 7 inches. 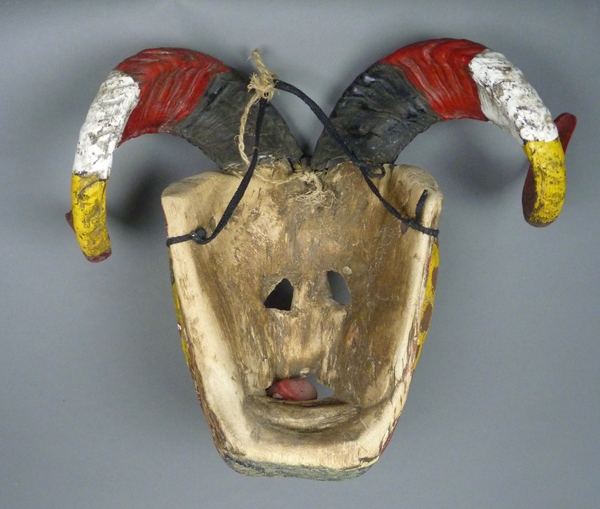 The back of this mask has obvious wear.

The second mask was obtained from Jaled Muyaes and Estela Ogazon of Mexico City in 2000. They had collected it decades earlier from the very small village of Los Otates in Northern Michoacán (Municipio of Tuzantla, East of Morelia). This mask is huge— 18½ inches across the tips of the horns and 17 inches in height, from horn tips to chin, while the wooden face alone is 11 inches tall, 8½ inches wide, and 5 inches deep. The scorpions on the cheeks were carved in relief, as were the snakes and the mustache. 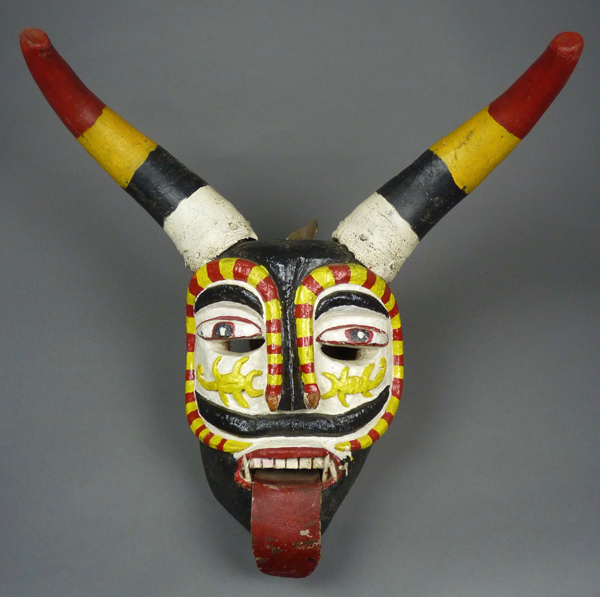 The ends of the horns were sawn off to blunt their tips. 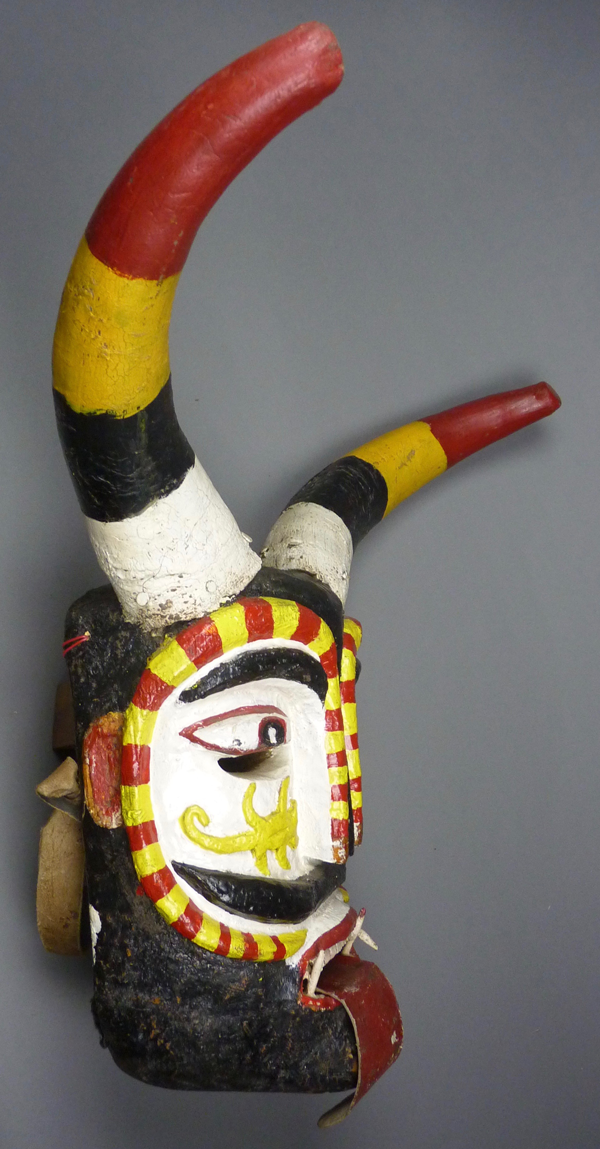 One barely notices the relief carved ears, as they are tucked behind the more prominent snakes. 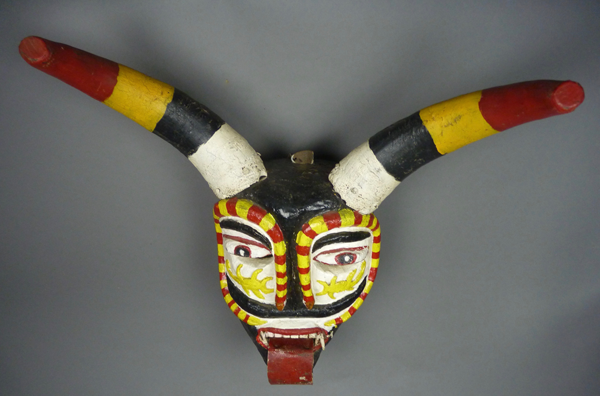 In Mexico, the faces of diablo masks often have fangs and the horns are frequently striped. 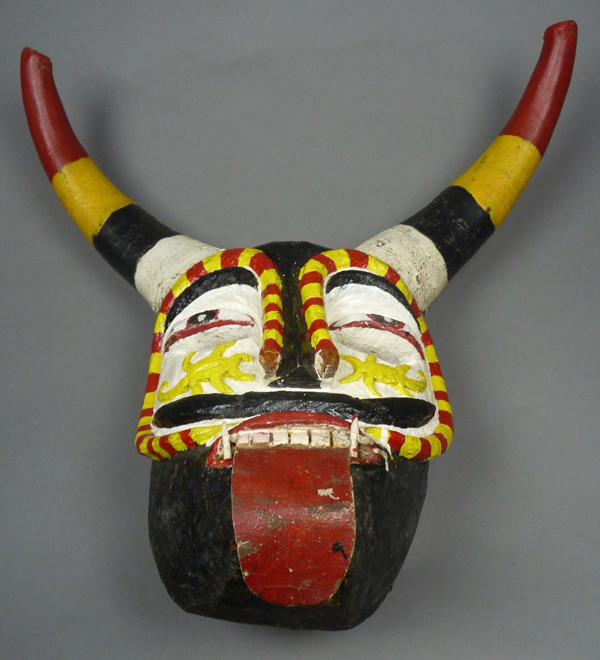 This devil has a leather tongue. 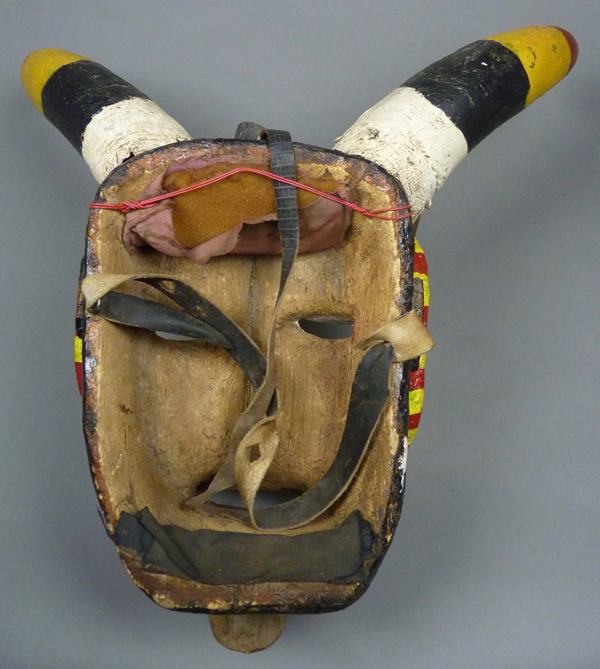 There are pads attached to the back of the mask for the wearer’s comfort, and these are obviously soiled and worn from long use.

The third mask in this group was collected by Jaled Muyaes and Estela Ogazon in Santa Clara del Cobre, a Mestizo town that is famous for the elaborate work of its coppersmiths. Santa Clara, in the Municipio of Puruándiro, a northern county to the west of Morelia, was established as a center for copper work by the Spanish crown in colonial times, continuing a tradition of copper mining, smelting, and working that was practiced by the Tarascan Indians. 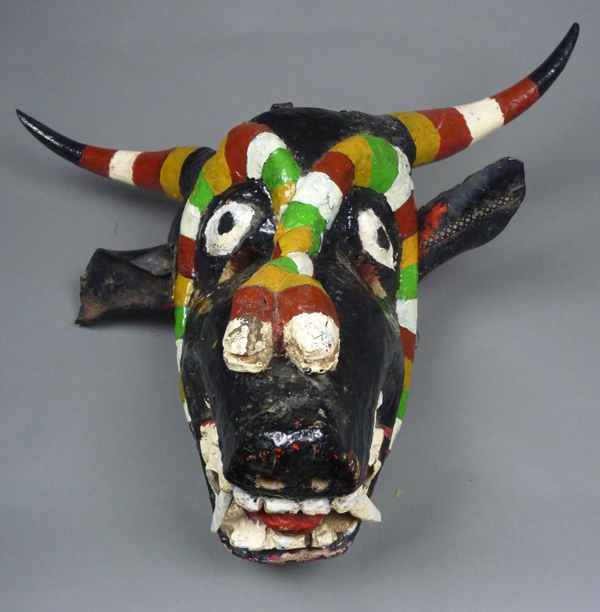 On this mask the two snakes are intertwined, which in fact is how serpents mate. 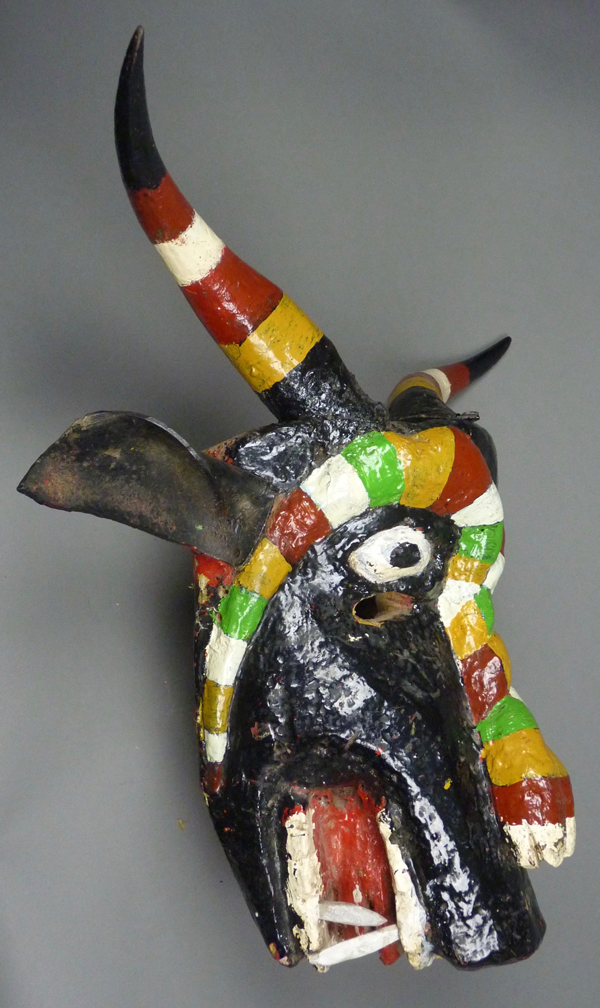 As with the other two masks, the snakes are prominent while the vision openings are unobtrusive. 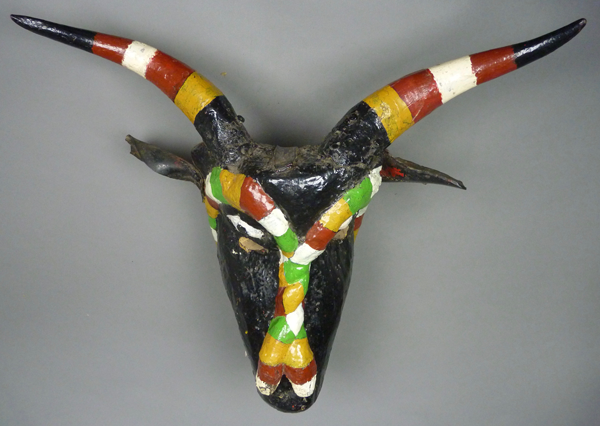 There are openings around the tongue to permit air exchange for the dancer, while the nostrils are non-functional. 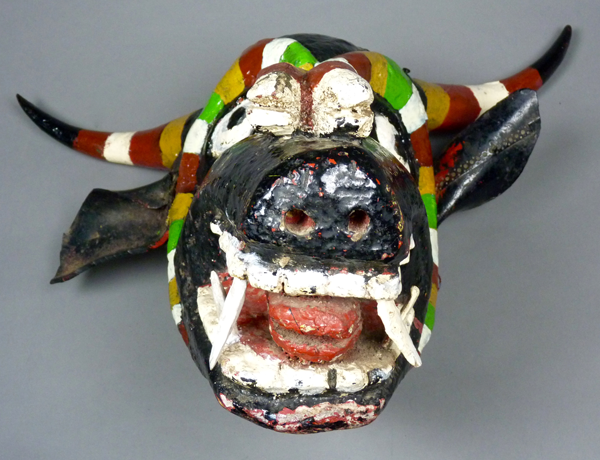 The wooden portion of this mask is 12 inches tall, 8 inches wide, and 6½ inches in depth, while the span between the tips of the horns is 19½ inches and the overall height from horn tips to chin is 18 inches. 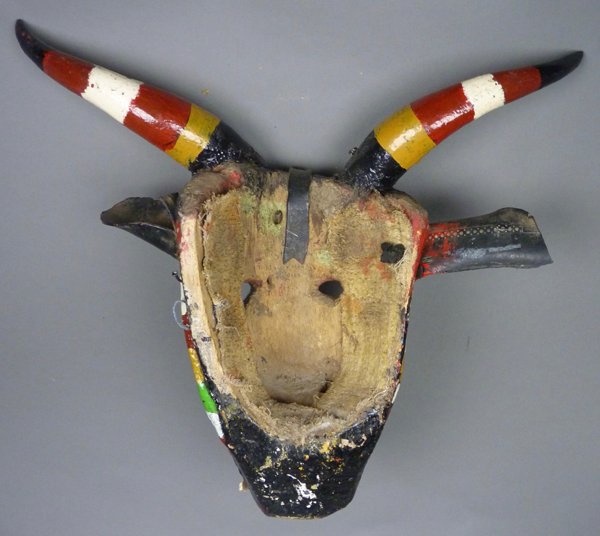 The back has obvious wear. The ears were constructed from recycled shoe leather.

Next week I will discuss three more Diablo masks from Michoacán.