I first encountered Corcoví masks in Donald Cordry’s book—Mexican Masks (1980, page 2, plate 3). One of these was obviously old and worn and it was said to have been collected in 1935. Unfortunately Cordy provided no explanation of the associated dance. In a recent book, Máscaras Mexicanas: Simbolismos Velados, published in Mexico City in 2015 by the Instituto Nacional de Antropología y Historia (INAH), there is a “Korkobi” mask with the following explanation—”En las tierras altas de Michoacán, el korkobi de la Danza de los Huehues representa a un ave nocturna a su vez simboliza el Sol y el dia. En la leyenda de María Lapsi, la korkobi es el ave que apareció de entre unos matorrales, sacudiendo las alas, después de beñarse en el estranque oculto en el bosque (page 260). [In the highlands of Michoacán, the Korkobi/Corcovi from the dance of the Old Ones represents a nocturnal bird with a face that symbolizes the Sun and the day. In the legend of María Lapsi , the korkobi is a bird that appears from the underbrush, flapping its wings, and then is swallowed up by the darkness , a hidden stranger in the forest.]

A second “korkobi” mask on page 261 of the INAH catalogue is misidentified in my opinion, and can be found also on page 49 (plate 42) of Moya Rubio’s book, Máscaras: la Otre Cara/ Masks: The Other Face (third edition, 1988), where it is described as a Moro from the state of Guerrero. To my eye, this appears to be a decorative mask.

Here is a Corcovi mask that, although unmarked, is easily recognized as the work of Victoriano Salgado Morales of Uruapan, Michoacán. I bought this mask on EBay™ in 2010.

The more recent of the two Corcoví masks in Cordry’s book looks very much like this one. 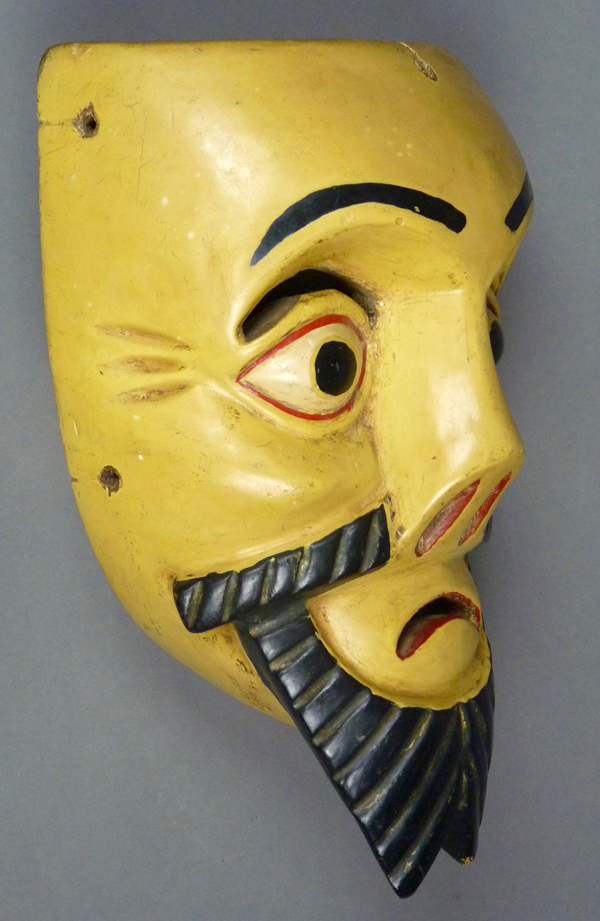 The mask has a bright yellow complexion because it symbolizes the Sun. 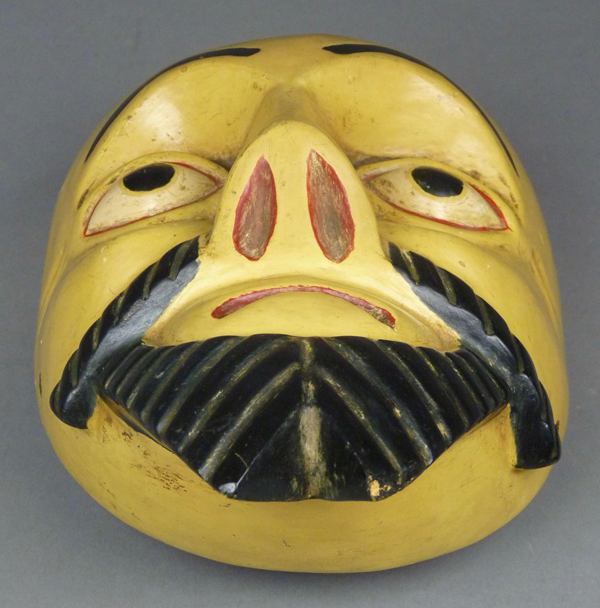 This mask is well carved in a manner typical for Victoriano Salgado. It is 10 inches tall, 6¾ inches wide, and 3¾ inches deep. 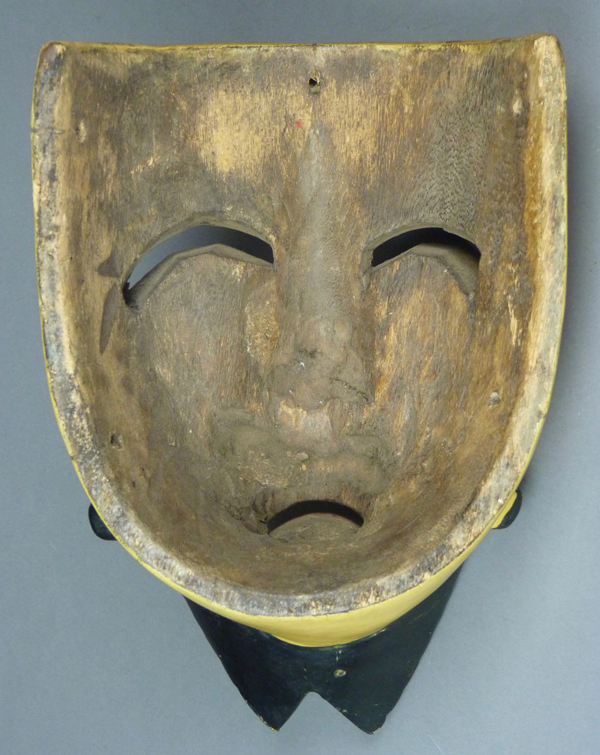 This mask appears to have been heavily danced.

Turning to Purépecha Masks:2002 Catalogue, we can learn more about Corcoví and related masks. On page 64 (page 61 in the Spanish edition) there is a dance photo of a “Corcoví of the dance of the Old Men at Charapan.” On page 51 there is a “Corcobi” mask (#29) that was carved by Isaías Sierra Jacobo of Charapan, Michoacán (page 16, #29 in the Spanish edition). It was used in the Danza de los Viejos (the old men) in Charapan. The accompanying note (on page 38) states “This mask represents a nocturnal bird, which in the corpus of Purepecha beliefs is considered a sign of ill omen and its song to announce death. In this dance, according to the locals’ testimony, the <<Maringuía>> represents the moon, the <<corcobi>> the sun, the tecolote (owl) the night, and the old men the stars dancing for the amusement of the Holy Child. All the characters in the dance try to get the attention of the Maringuía with shouts and compliments but it is the Corcobi who courts her.”

This mention of the Holy Child makes it clear that the Corcoví and related characters dance with the Viejos on Christmas eve, and probably not for Candlemas, several weeks later.

The caption for mask #28, a Maringuía mask by the same carver, adds a few details. “The old men get into two lines, one headed by a tecolote (owl) and the other by the Corcobi,” while Maringuía is at the head of the line, leading both. On pages 50 and 51 (16 and 17 in the Spanish edition), there are two Tecolote (owl) masks that were also carved by Isaías Sierra Jacobo; each is labeled as #30. The caption (again on page 38, or on page 29 in the Spanish edition) identifies these masks as representations of “The Tecolote or owl, with carved notches to simulate feathers…”.

Here is a Youtube™ video from Charapan. If you watch attentively, you may see a Corcoví (at 1 minute on the left edge of the screen) and a Tecolote (at 2:15 coming in from the right side). In this video Maringuía is portrayed by an unmasked woman. One of the Viejos wears a mask with a pale green face, and in the Purépecha Masks:2002 Catalogue, we find a green-faced mask from Charapan, a Hermit from the Pastorela dance that was carved by none other than Isaíasis Sierra Jacobo. I don’t know why the green mask is dancing with the Viejos, but of course the Hermit character is a Viejio as well, so perhaps this mask is being borrowed for the Corcoví performance.

I have no more Corcoví masks to show you, but I do have three of the Tecolote (owl) masks. Here are two that I bought from Jaled Muyaes and Estela Ogazón in 1999. They were collected in Santo Tomás, one of the “Once Pueblos” (eleven towns) in the La Cañada highland area of Michoacán. Santo Tomás is less than 40 miles north of Charapan. Here is a video of the Viejos dancing for the Candelmas fiesta in Santo Tomás. No Corcovís or Tecolotes are in evidence, but we can see that the Viejos in Santo Tomás look more like Viejitos than Curpites.

Here is a Tecolote (owl) from the Danza de los Viejos of Santo Tomás, Michoacán. 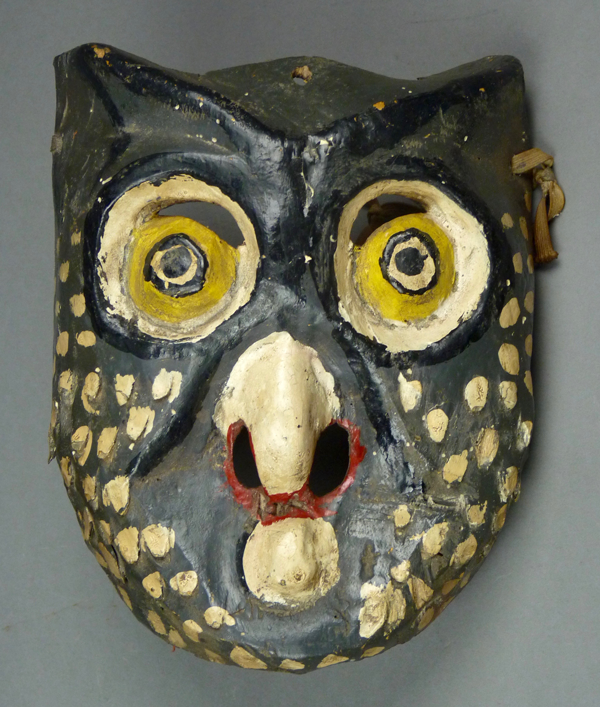 The “feathers” have been lifted from the mask’s face with a chisel. It has yellow eyes. 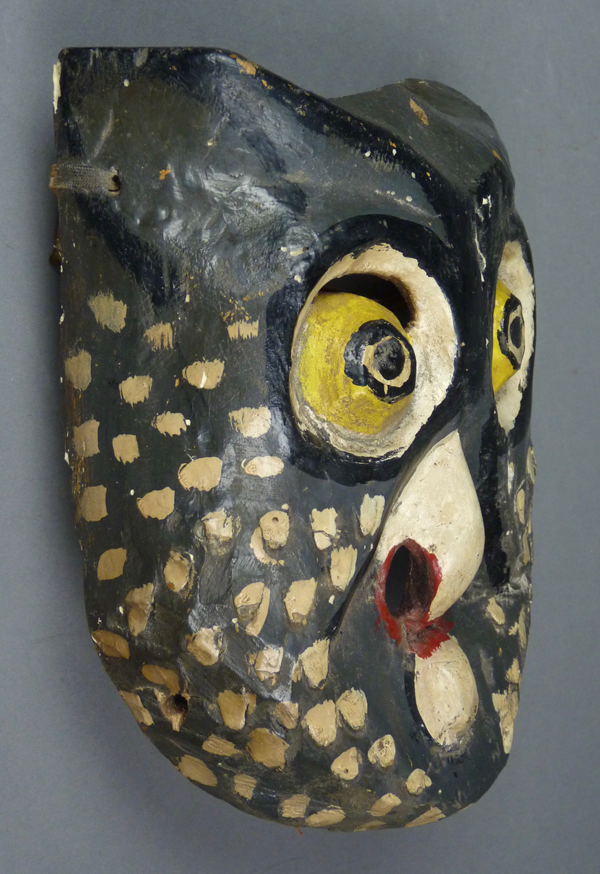 It appears t have heavy staining from use.

Here is a second Tecolote from Santo Tomás.

It has the same overall design as the last mask. 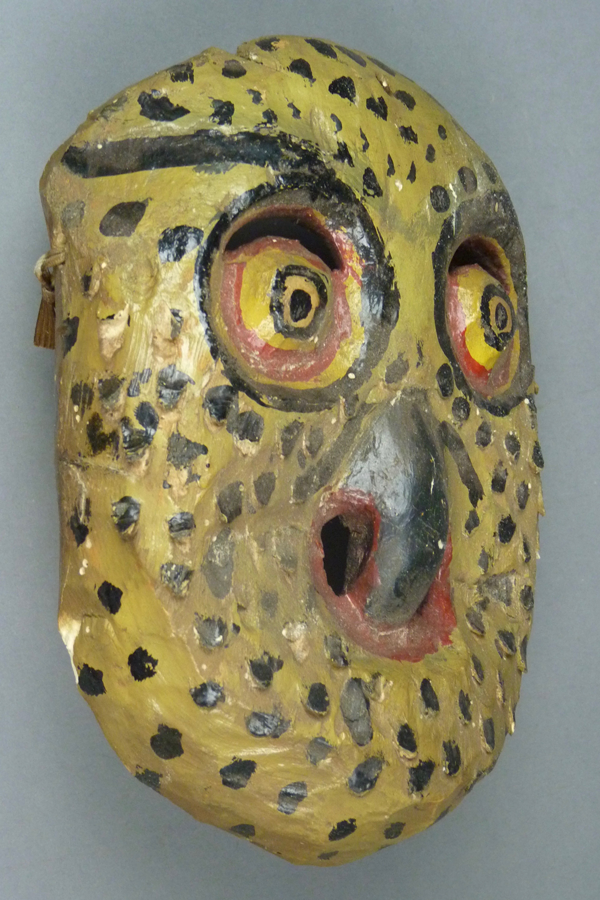 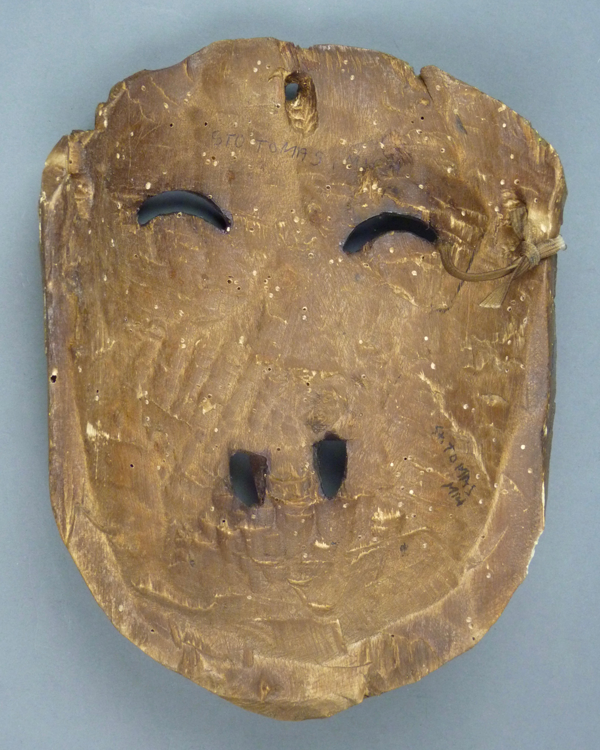 The back of this mask is equally stained.

The final mask in today’s post is a Tecolote found in “Copanatoyac, Michoacán,” but actually that town is in the Mexican state of Guerrero. This is evidently another of those masks that have traveled to a distant market town. I bought it on EBay in 2010. It was said to be for the “Apache dance.” The back of this mask, with its visible chisel marks, is typical of masks from Michoacán. There is just one problem—Copanatoyac Guerrero is more than 500 miles from Charapan, Michoacán. 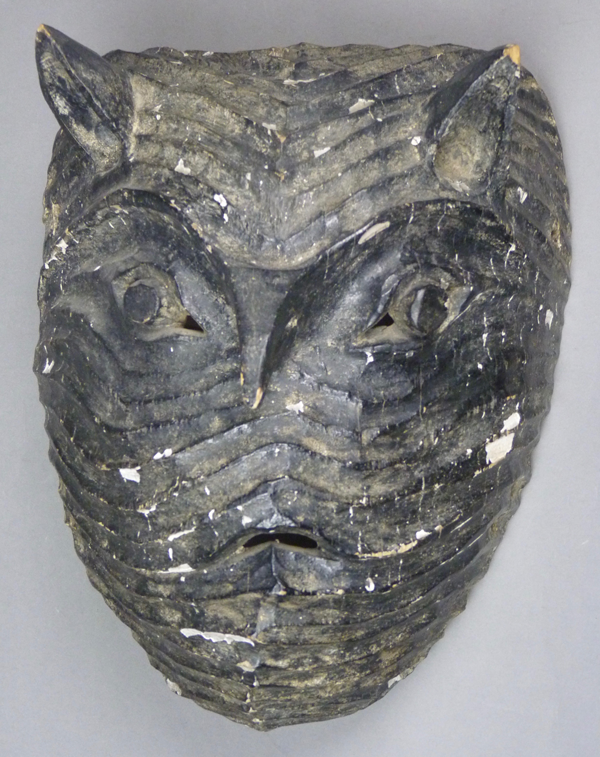 The face of this mask is grooved, and the feather tufts on the head of this owl look like ears.

The eyes and the beak are distinctive. I would like to see more of this carver’s work. 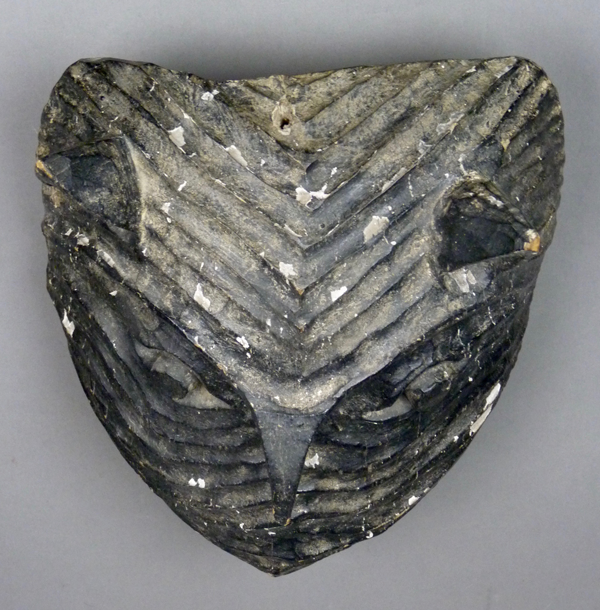 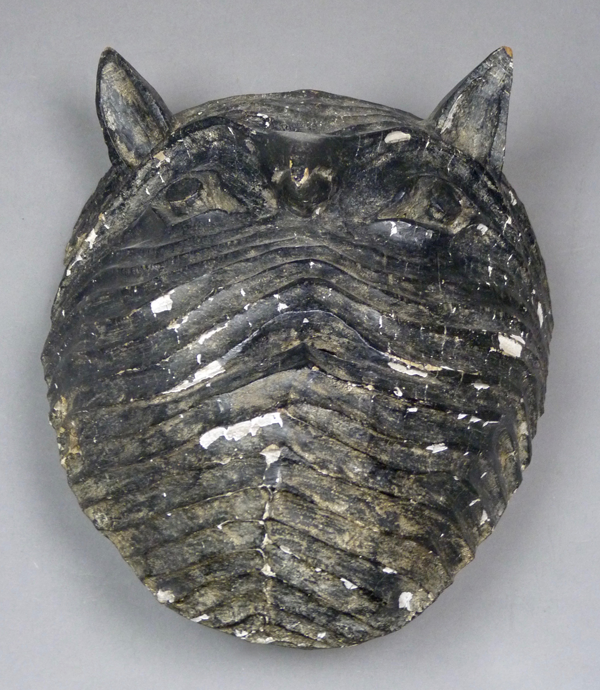 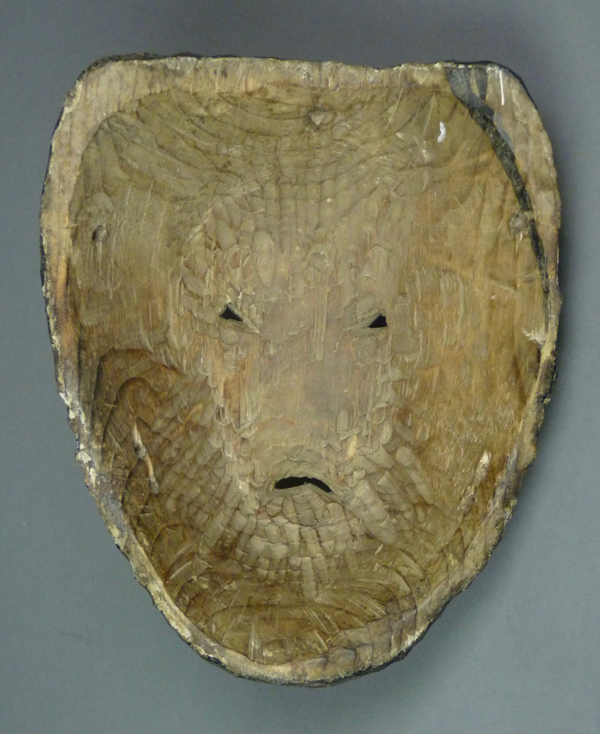 The back of this mask is heavily stained.

I hope that you have enjoyed seeing these rather characteristic owl masks from Michoacán.

Next week I will show you Feo masks from Paso Ancho, Michoacán.