In recent weeks I have shared typical older masks from the Tlacaloleros dance; I imagine that they date to the 1960s or 70s. Today I will introduce other Tlacololero masks that are more unusual in their designs or styles, although they may have been commonly used in the past. I will present these treasured examples in small groups, to savor them. In my experience, masks like the first two are said to be “Rastreros” (trackers). These two have faces that are painted red and black. The third, which would have been worn by some other dance character, has a vivid red face.

I purchased the first of these Rastreros from Spencer Throckmorton of New York City in 1995. 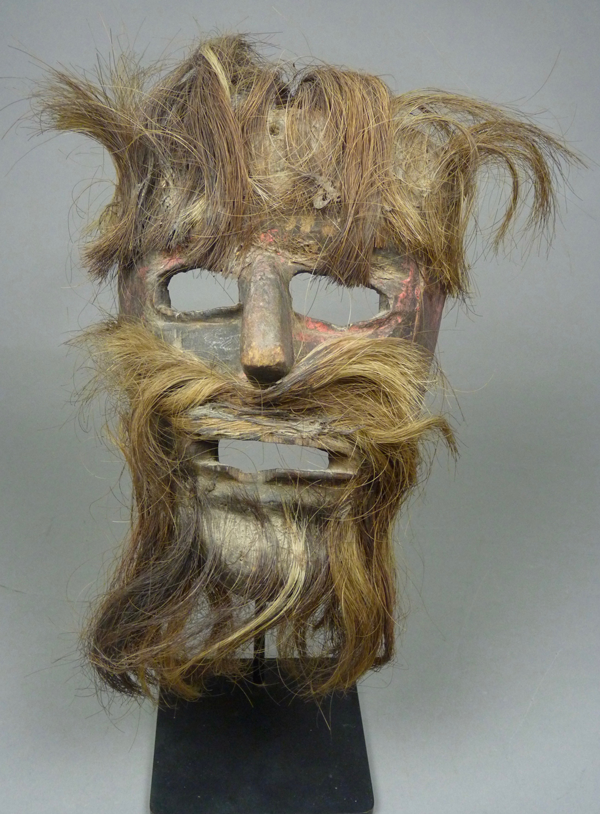 The hair is attached to the face with some kind of glue. 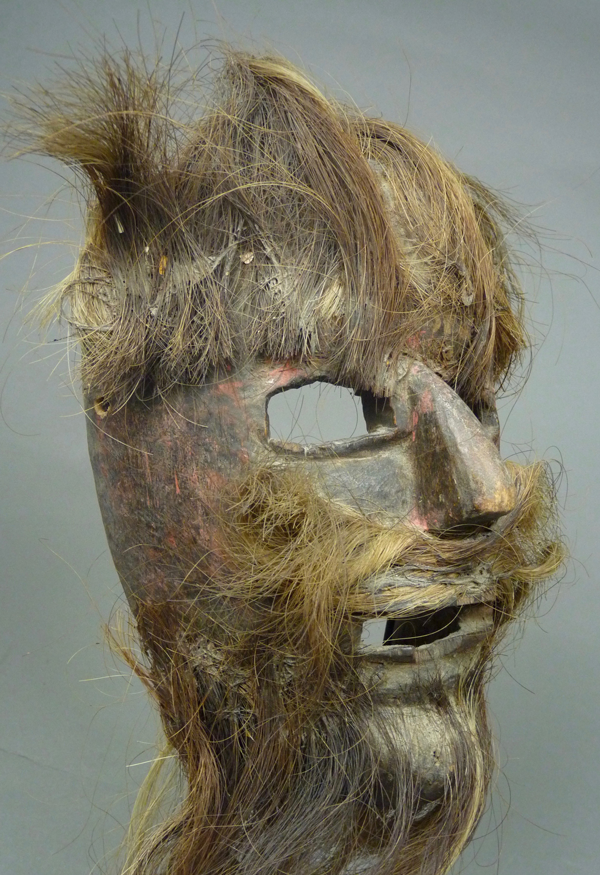 It seems that this mask was originally painted red, and then later black. 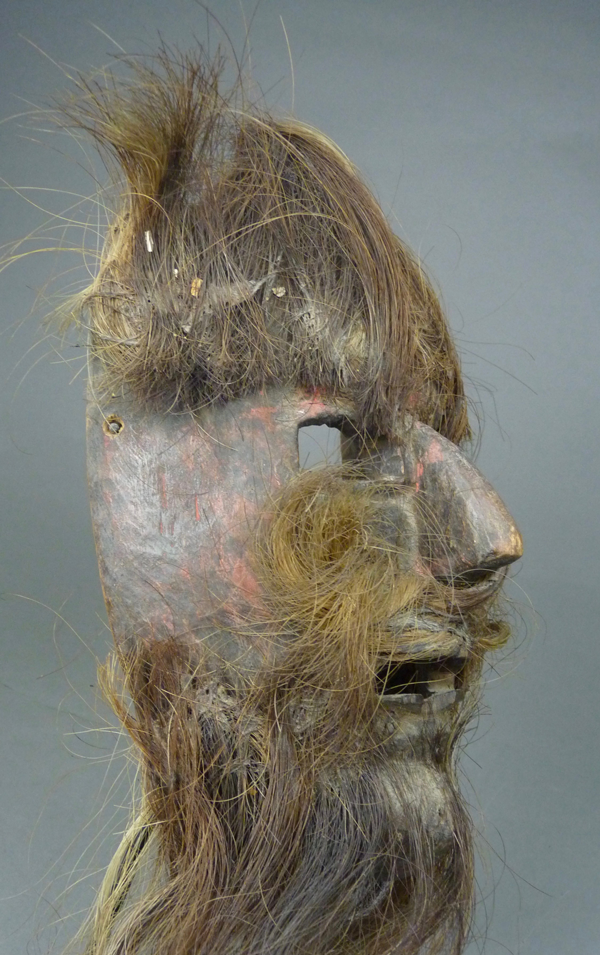 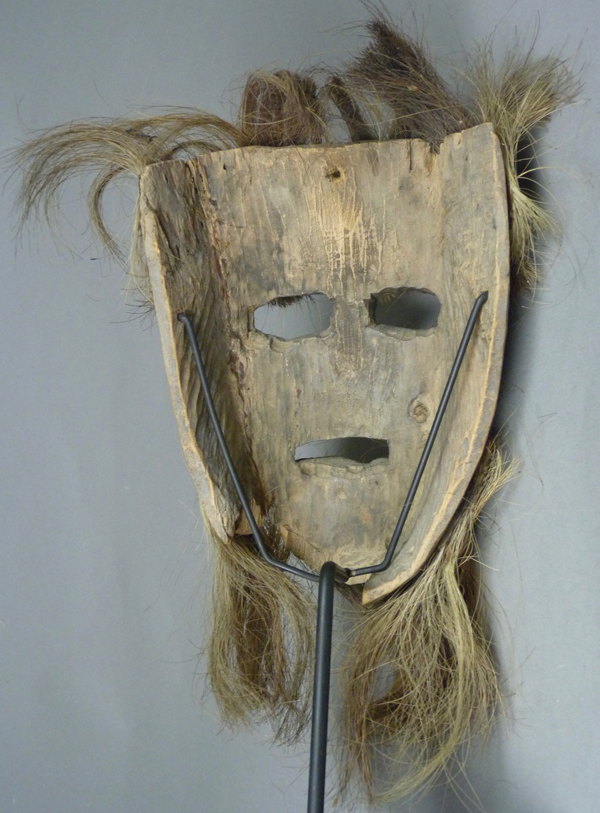 The left side of the mask split from the rest and was glued back in place, but the shattered chin was not repaired. The back is dark from use.

I found a second similar Rastrero on EBay™ in 2001. 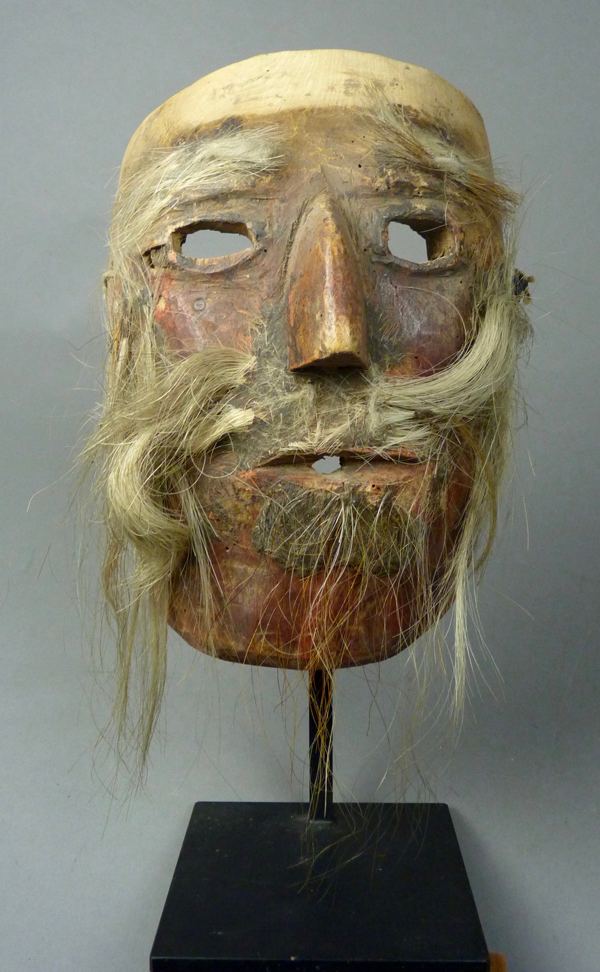 The hair appears to have been glued on with black pitch. 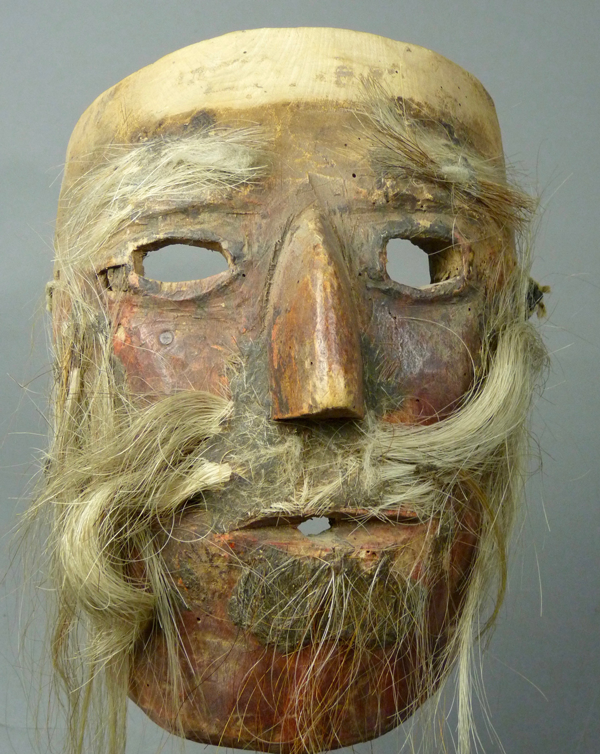 There was evidently a hat or headdress that made it unnecessary to paint the upper edge of this mask, but I don’t see any holes to attach such an element. 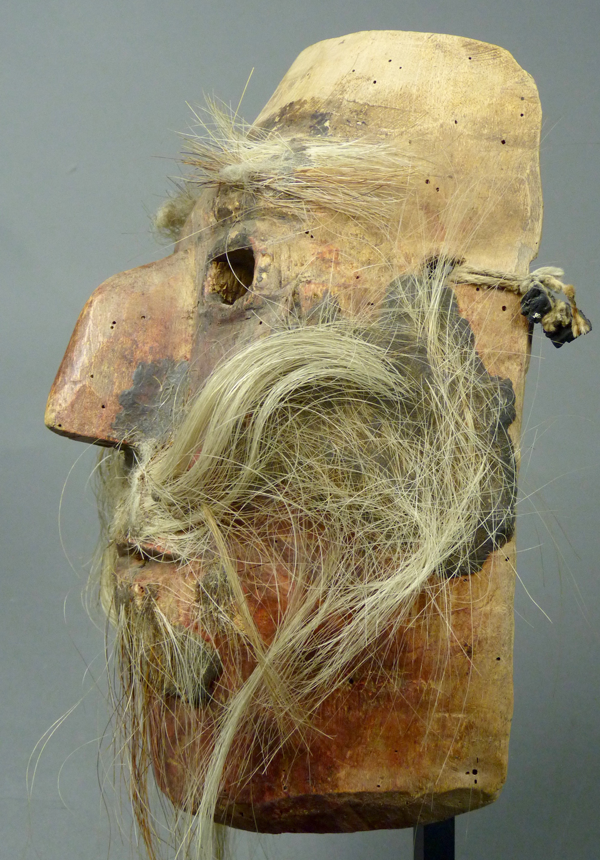 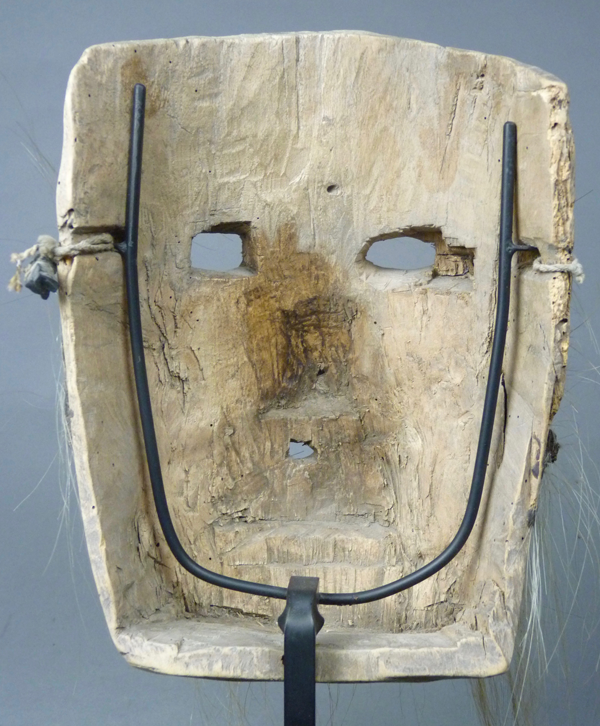 This is another heavily stained back.

Today’s third mask is one of the most unusual in my collection. I purchased it from Jaled Muyaes and Estela Ogazón in 1998. At that time Jaled said that it was found in Chichihualco, Guerrero, and it had been worn by a Payaso (clown) in the Tlacololeros dance. It didn’t occur to me then to ask whether this payaso had any other name. According to recent published accounts, the corps of Tlacololeros includes sixteen named characters (including the Tigre and el Pitero, the flute player). Being a dance about farmers, some of the  dancers are named as if dedicated to a particular local crop, such as el Maize (corn) or “El Chile Verde” (green chile). If there was a Red Chile character, I would certainly think that he wore this mask. El Maize is said to be the most important figure in the dance, the one who directs all the other dancers, and he has the special duty to shame village wrongdoers by publicly announcing their actions at the beginning of the dance. In nearby Mixtec dances, those who make such announcements are definitely clowns, so I wondered whether my red mask was worn by el Maize. However, a mask that speaks should have an open mouth, while this one is a Mudo (mute, a mask with a closed mouth to indicate the lack of a speaking role).

Not only does a mute payaso lack a clear place in the published Tlacololero dance lineup, but also the face on this mask is nowhere to be found on Internet images of Tlacololeros. Of course, and this is something that we have repeatedly encountered in Mexican masked dances, there is a vast amount of local variation, and although the mask was found in Chichihualco, it is quite possible that it was danced in another nearby town. Recall the Juanegro dances of the Huasteca, where it was common for Juan and Pañol to be the only dancers with masks, but in some villages there was also a masked Viejo, and sometimes the woman being courted wore a mask as well. In at least one village the parents of Juan and Pañol even wore masks.

This mask has an odd and highly distinctive face, with its turned-up nose and crimson complexion. Its oversized smiling lips do suggest the face of a clown. It is the same size as a more typical Tlacololero mask and it looks like a Tlacololero mask in its carving style. I consider it to be rare and wonderful. 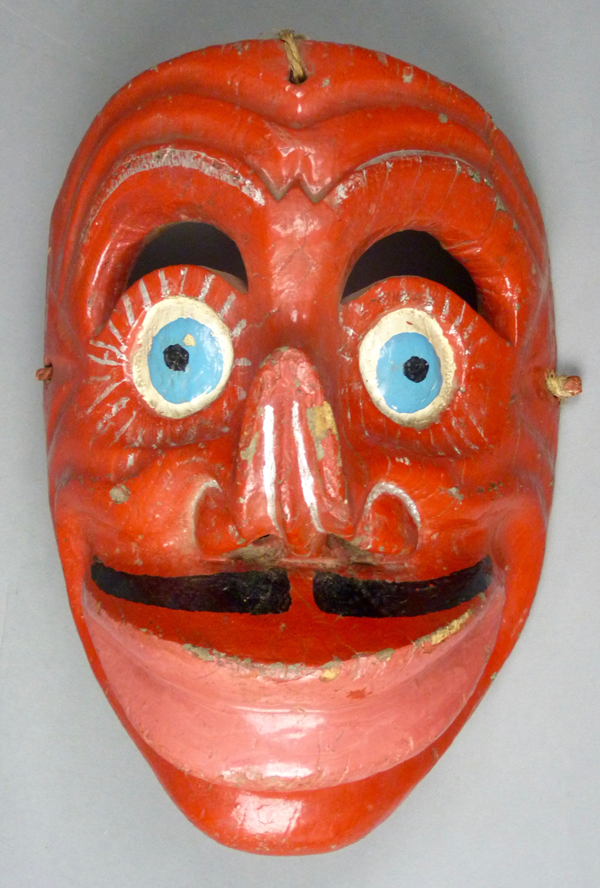 Look at the stylized carved peak over the nose. 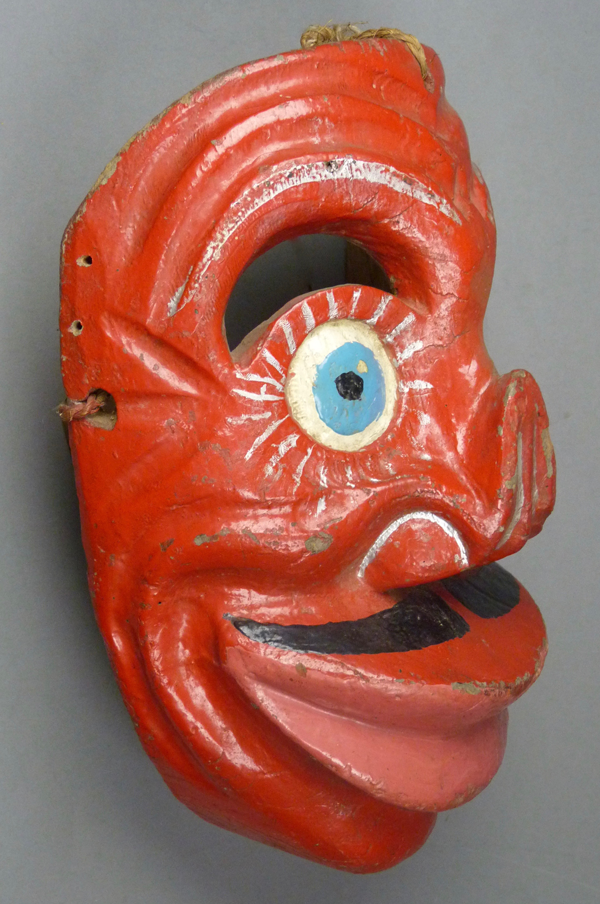 The end of the nose is turned up to an extreme. Could this be a mask of a monkey? In the band of Tigre dances that crosses several cultures, there may be a particular focus on playful interactions between monkeys and jaguars. This is clearly the case in Suchiapa, Chiapas and highland Guatamala, and perhaps also in the Mixtec towns. Here is a link that I initially offered  in July, 2015 of a Monkey in Suchiapa that interacts with a Tigre.

And here is another link from July 2015 of a band of monkeys in Coban (Alta Verapaz), Guatemala, who play with a Tigre. 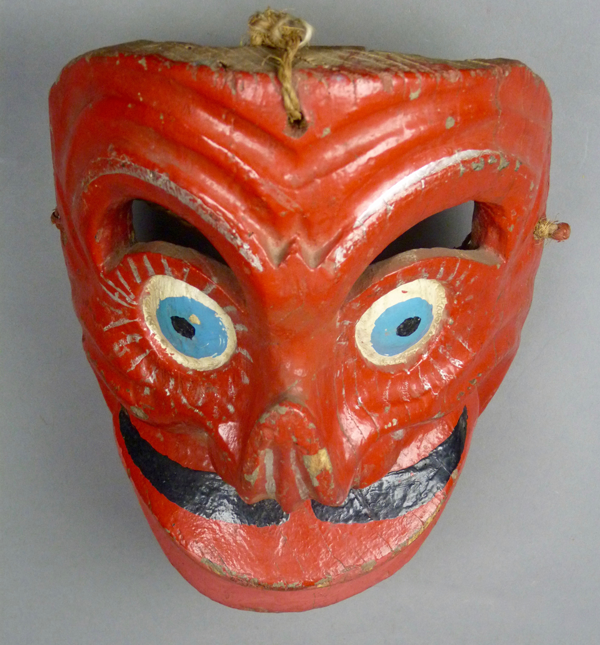 In the interaction between a jaguar and a monkey, the monkey might well think it best to remain silent and sneaky. 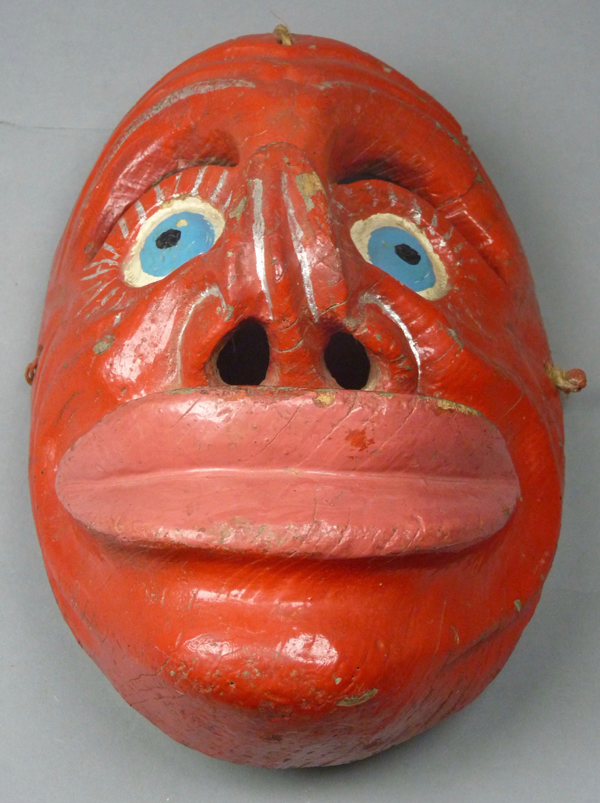 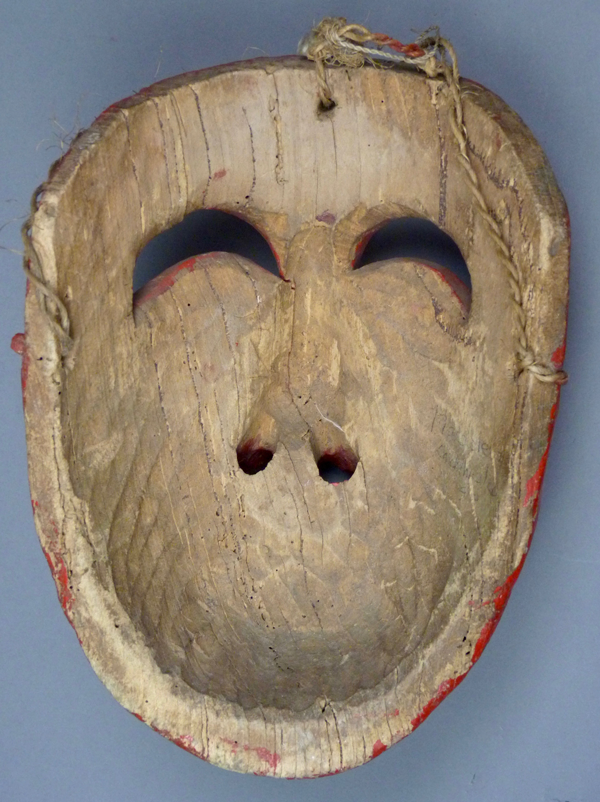 This back is also stained from extensive use.

Next week I will feature a few more unusual masterpieces.