Today will end my discussion of Moro masks from the State of Mexico. I’ll begin with a mask I meant to include in last week’s post, but it was hidden in a box; I could picture it in my mind’s eye and finally I found it, after I had given up all hope! This mask will be followed by a threesome that was found in Apatlaco, in the Municipio of Amecameca, Estado de Mexico. Unfortunately I was unable to find any YouTube™ videos that included masks like these in Apatlaco, Amecameca, or in el Estado de Mexico. Yet here they are, variations on what was undoubtedly an established design, decades ago. I bought the trio from René Bustamante, one by one, in 1994. He was of the opinion that they dated to the 1940s or 50s.

Here is my lost and found Moro. Although I bought this from Robin and Barbara Cleaver in 1994, it had earlier been in the collection of Jaled Muyaes and Estela Ogazón, and probably they sold it to the Cleavers. It came with little information, simply “a Moro from the State of Mexico.” It is old, probably circa 1950 or earlier, but the age is difficult to estimate with precision because it is glazed with the residue of some solvent or varnish, probably applied by Jaled to treat an insect infestation. It is marked with a number from the 1981 mask show in Mexico city. 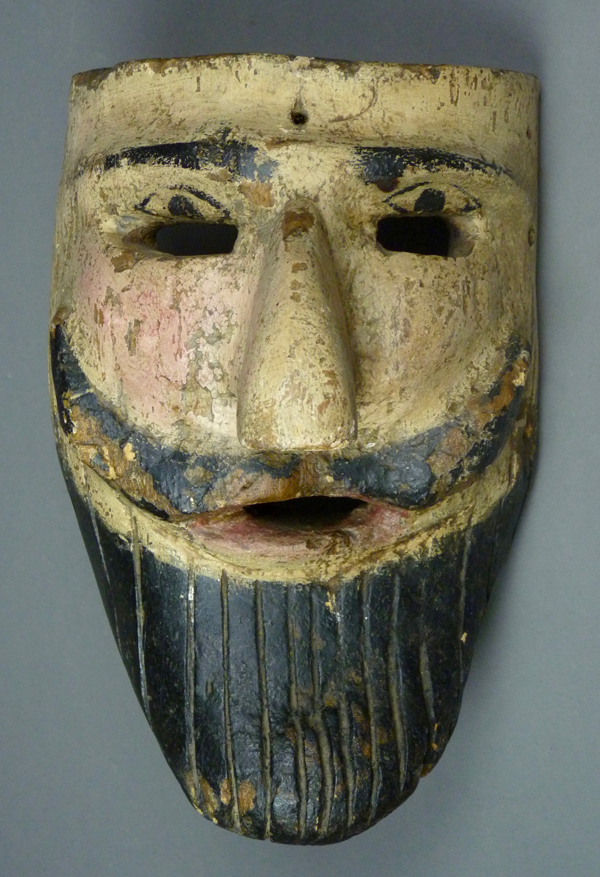 This mask is unusual for the shelf over the brows. 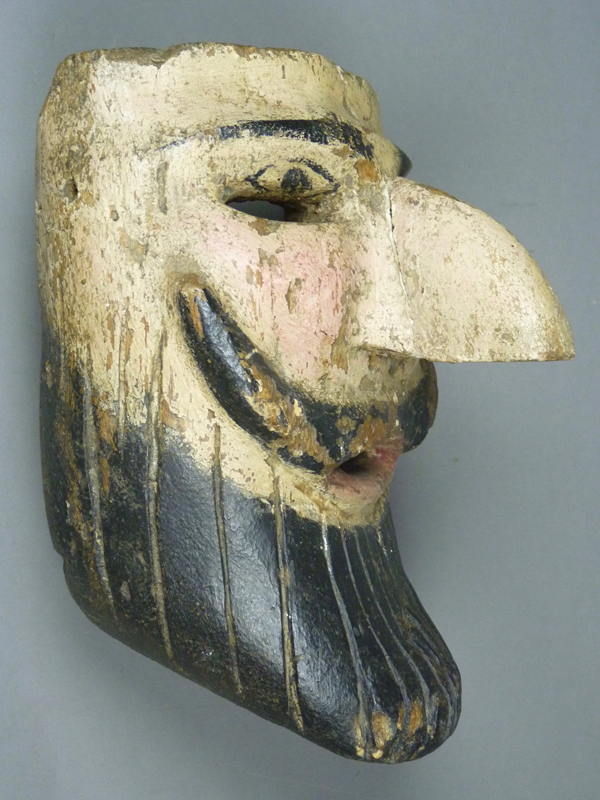 This mask is 11 inches tall, 7 inches wide, and 5½ inches deep. A piece of wood was glued on the front of the original wood to accommodate the long nose, and over time that joint has opened up. 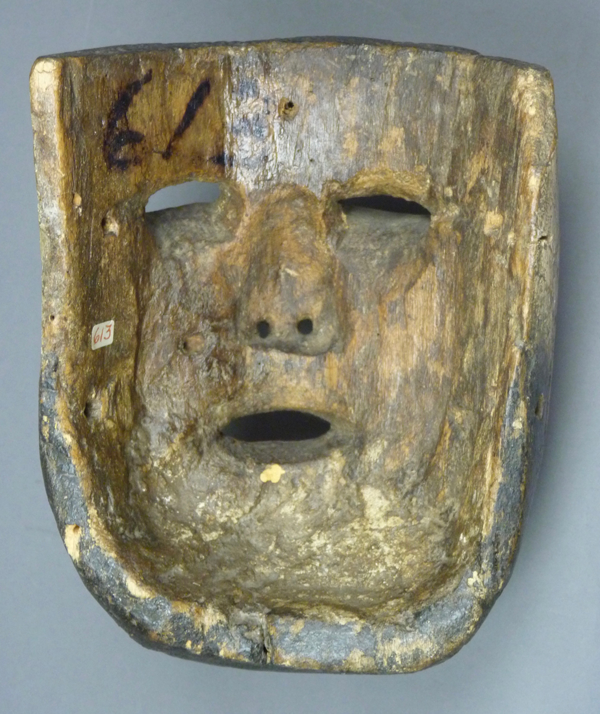 The back seems old, but there is a glazed surface due to some solvent. The number, 613, is the sort that marked the masks in the 1981 show of Jaled and Estela’s masks.

A trio of masks follows. At the time of purchase, I was drawn to these masks because they had vivid and well carved features and their shared aspects were balanced by small variations in the details so that they formed an interesting group. Yet I gradually noticed that they presented me with a troubling puzzle or riddle—all three had articulated jaws, but this feature was so clumsily executed on two of the three masks. Sometimes I wondered if they were all fakes, invented masks made for sale to tourists? In the process of reassessment for this post, I realized that these were probably traditional masks with a history of heavy use, and in design, not unlike the first mask in today’s post, but later all three were probably altered to mimic masks from other communities that had articulated jaws. In other words, they were modified at some point in response to a fad! I will discuss them, one by one, to explain this conclusion. 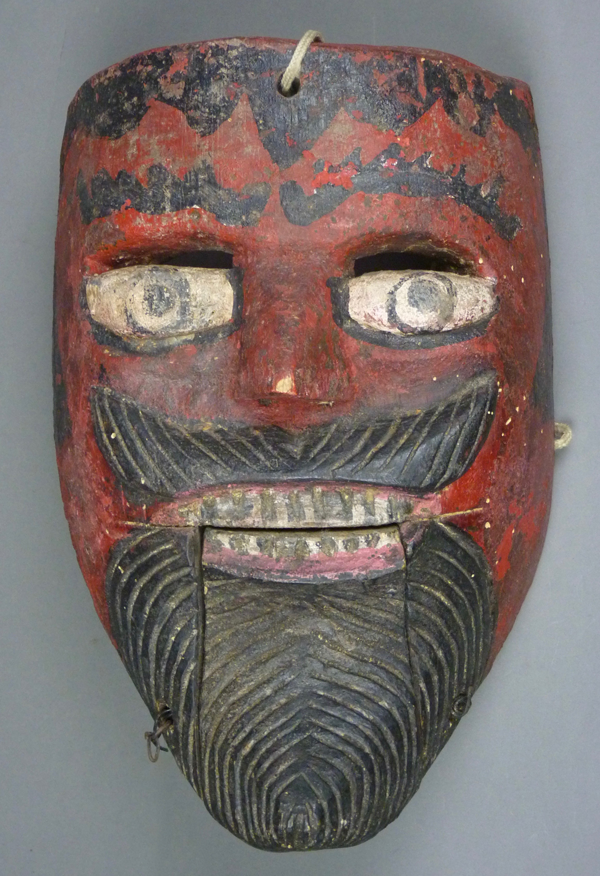 This red-faced Moro has a nicely carved mustache and beard. The paint is obviously worn. The jaw is articulated and it moves appropriately, pivoting on a wire  that passes through both sides and suspends the mobile section. I found myself wondering whether this mask and the other two might have originally had solid jaws and then were later converted. I have seen somewhat similar conversions in the Sierra de Puebla. 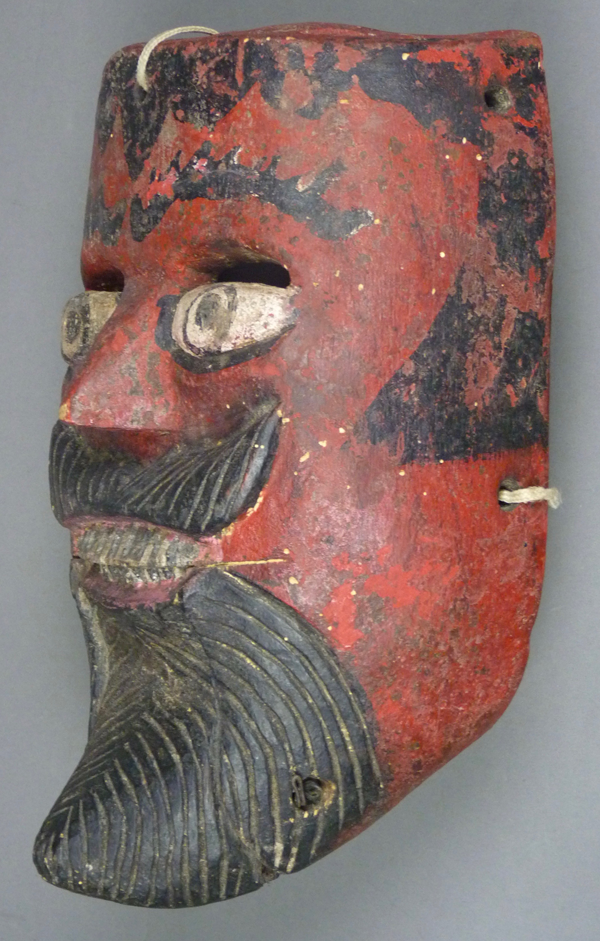 This question allowed me to notice glaring evidence that such a conversion had occurred, and long after the mask was painted and placed into service. The saw stroke that opened a gap between the upper and lower teeth was carelessly performed, leaving sawn lines to mar the paint on both corners of the mouth. Had the articulated jaw been created before the mask was painted, then the saw would not have disturbed the paint. Another telltale detail is that the carved grooves of the beard match up perfectly across the saw cut; the chin was carved and painted, and then three saw cuts separated the jaw from the mask. This mask is 11½ inches tall, 8 inches wide, and 5 inches deep. 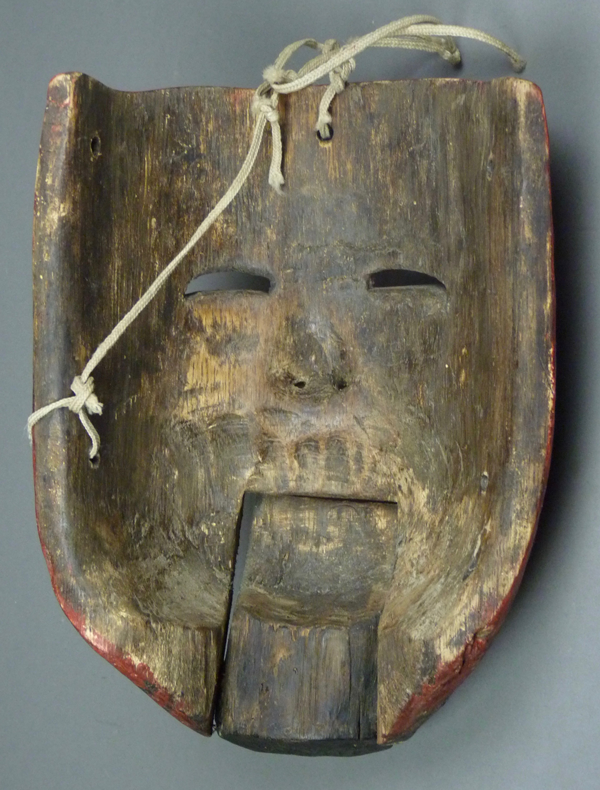 The back of this mask is darkly stained, possibly as a protective strategy. We have seen this on other masks from the region. Then the wearing off of the stain would become the measure of use. Alternatively, it is possible that the back is so dark as a consequence of extreme exposure or use. A third possibility is that the back was deliberately stained for the sole purpose of creating a false impression of exaggerated age, but usually such staining is more uniform.

After the jaw was separated from the mask by saw cuts, then the back of the jaw was reshaped.

Lets turn to a second example, a Moro of the same form with a pink face.

Superficially, this mask looks very similar to the first one, except that there are carved wounds, the face is painted a different color, and the paint is less worn. 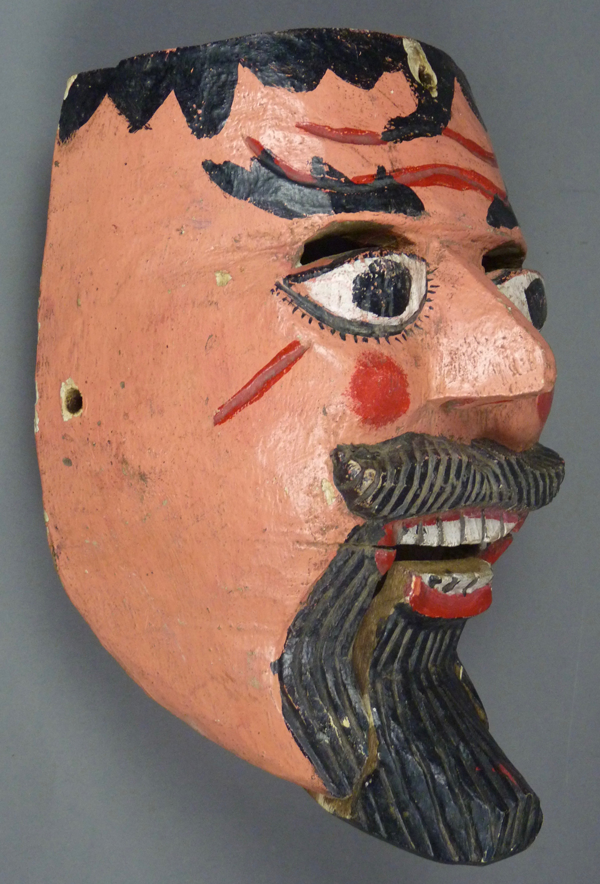 We see the same saw stroke at the corner of the mouth; in fact it cuts beyond the edges of the desired opening. We see again that the beard was carved before the jaw was cut from the rest of the mask. What is difficult to see is that small nails have been driven diagonally through the sides of the chin into the articulated jaw. These nails tend to pin the jaw in place while permitting some movement. In other words, the jaw is articulated, but in a manner that is clumsy. This mask is 10½ inches tall, 8 inches wide, and 6 inches deep, only slightly shorter and deeper than the other two. 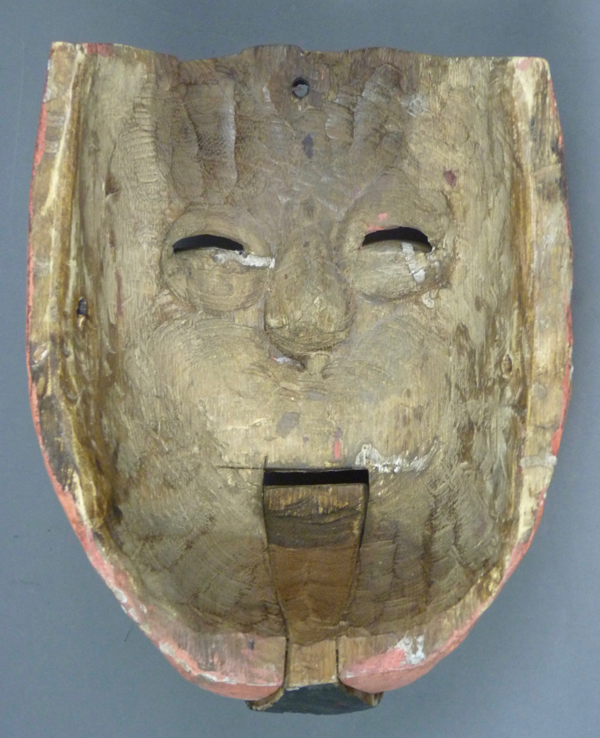 This mask has a more natural looking back, as if there was staining from long use but without any application of a protective or deceptive coating. In terms of craftsmanship, the round hollow areas around the vision openings are very carefully carved, and contrast artistically with the carved hollow to accommodate the nose; these are impressive details. Functionally, one can see very dark staining where the dancer’s tongue has pressed against the top of the jaw to open it. In any case, the jaw has limited movement.

The third mask is painted a lighter shade of pink while the facial hair is white. There are no carved wounds. 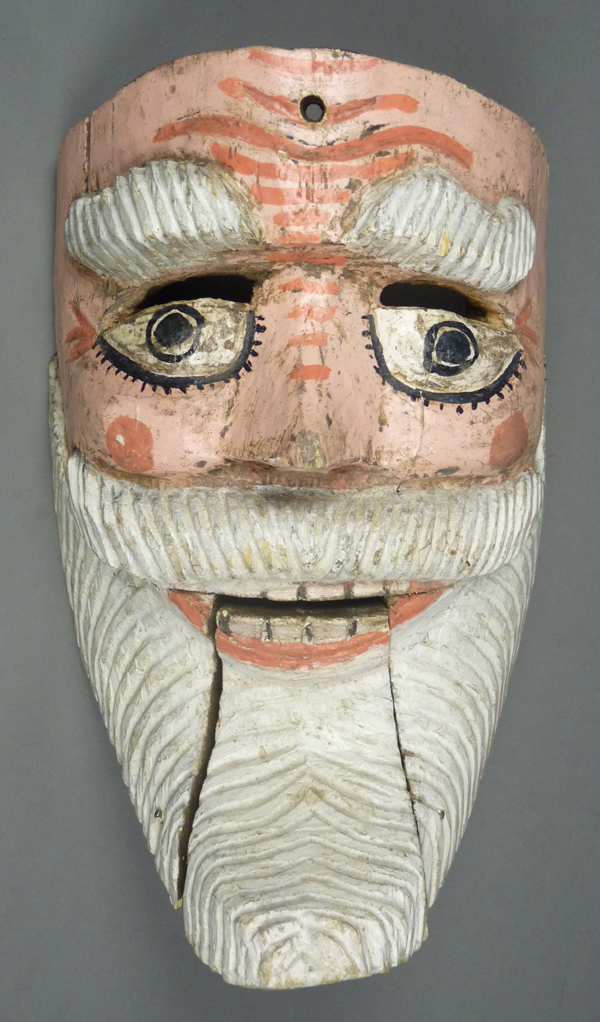 Once again it is easy to see that the entire mouth and beard were carved before the jaw was cut from the mask. 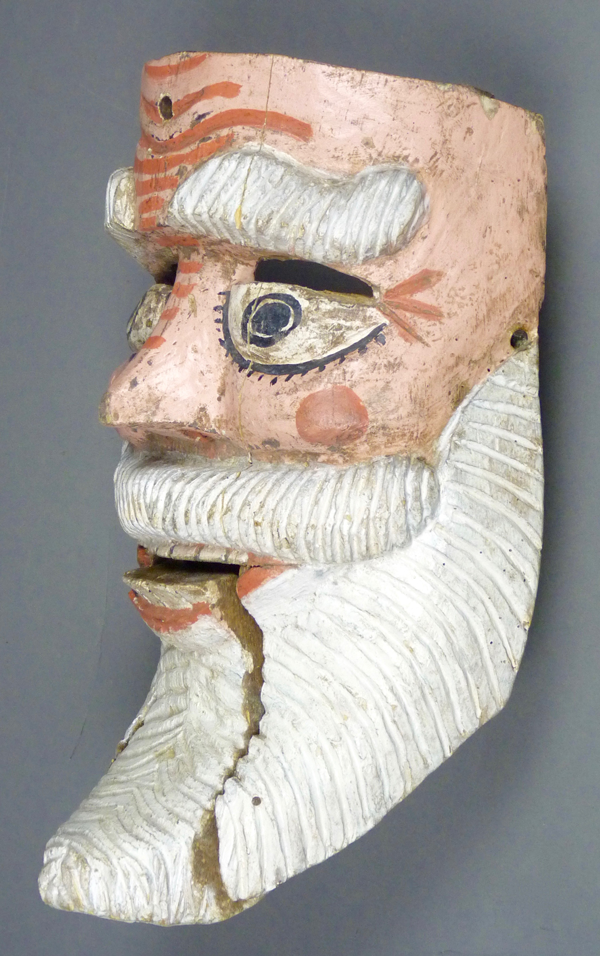 Those same excessive saw cuts show up at the corners of the mouth on the third mask as well! The head of a small nail is visible in this side view. This mask had the jaw pinned by nails, just like the last one, and with equally marginal effect. This mask is 11½ inches tall, 8 inches wide, and 5 inches deep, exactly the same dimensions as the first. 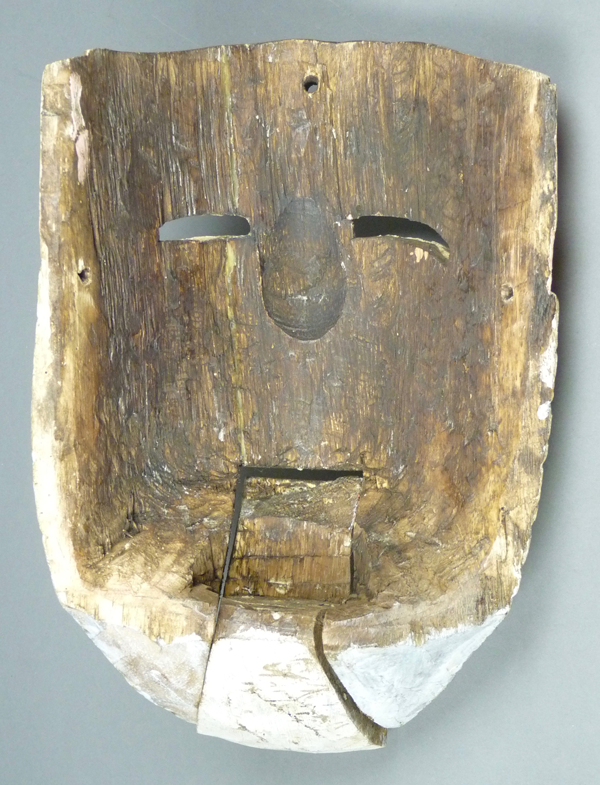 There are no hollow areas around the vision openings. The back appears to have been stained, possibly for protection. The back of this articulated jaw seems to have been reshaped.

The crudely constructed articulated jaws on the last two masks suggest that this feature was applied after these masks had been carved and placed into use, as if to copy some imported model from another town.  They are essentially expedient imitations. I do believe that these are traditional masks and that they were probably still danced following modification. One does not usually think much about this aspect of mask evolution—innovation as imitation—even though we frequently encounter imitative innovations in other products, such as cell phones. The conversion was no easy task, and considering the difficulty, was fairly well accomplished, but we have seen other articulated jaws that functioned far more easily and effectively, because they were designed to do so when originally carved. See, for example, Tiberio’s swinging goatee in my post of March 5, 2018, or the flapping jaw on the first mask in last weeks post. In those more highly developed examples, the articulated jaw was carved independently from the rest of the mask and then the two elements are carefully connected.

In Zozocolco de Hidalgo, Veracruz, one carver (Bernabe) converted a variety of masks by other carvers into articulated versions, using a similar approach. His task was easier though, as those masks had been originally constructed with open mouths. Here are masks carved by Silverio Ochoa Martínez to portray Tragedy and Comedy, and I obtained them elsewhere. When I asked Silverio if he carved these masks, he acknowledged that they were his work. But when asked if he had carved them with articulated mouths, he said “no.” Later Bernabe admitted that he had been the one who modified these masks. Aren’t they terrific! Loose or elastic ties would permit the jaws to flap (bounce). 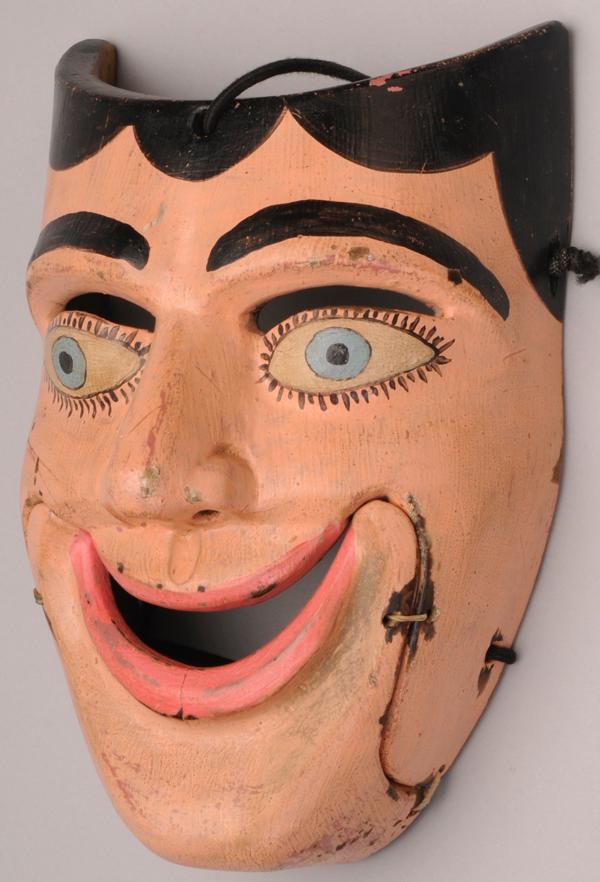 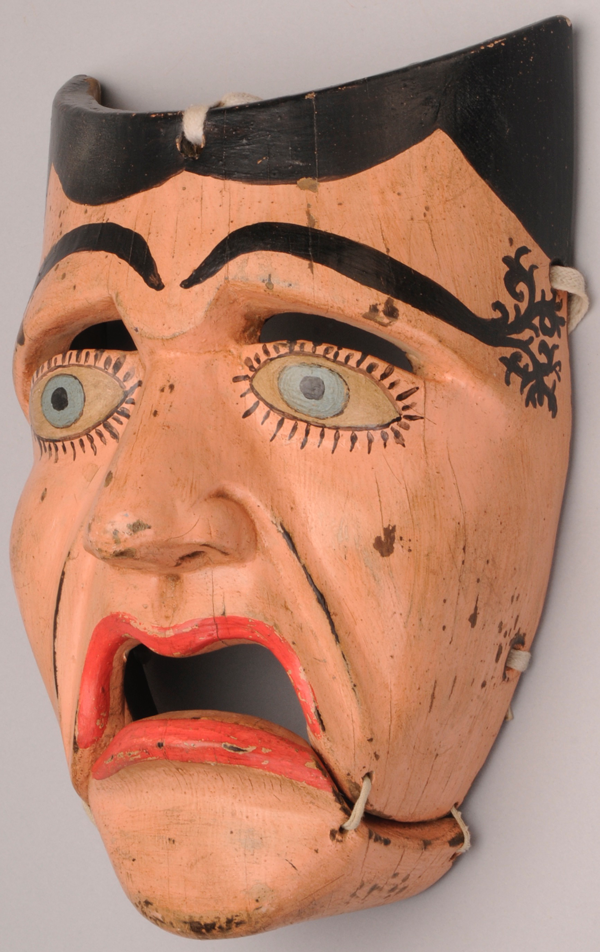 I introduced you to Silverio in my post of December 8, 2014, “The Book Trip.” If you haven’t seen this before, don’t miss the snake.

I hope you have enjoyed today’s detective story. Next week we will shift our gaze to Moro masks from the Mexican state of Guerrero.