Today we will view photos from a recent visitor, who provides us with examples of masks from a particular Morería, that of Cruz Juárez in San Miguel, Totonicapán, Guatemala. These masks are branded with two consecutive capital letters, C and J.

An enlightening book— Máscaras y Morerías de Guatemala/Masks and Morerías of Guatemala— was published by the Museo Popol Vuh of the Universidad Francisco Marroquín in 1993. The author was Luis Luján Muñoz. For those of us who were collecting Guatemalan dance masks at that time, this was our bible.  One learned there that the Morerías were essentially cultural centers which specialized in the creation and maintenance of dance masks and costumes that were necessary for the performance of  traditional Guatemalan dance dramas. In recent centuries these were family operated business establishments, although in earlier times they may have been indigenous tribal institutions. The proprietors of the Morerías were responsible for the creation of appropriate dance costume elements, and as I related in last week’s post, they maintained Spanish Baroque carving traditions that had been introduced by European missionaries, centuries earlier, for the carving of Saints in Roman Catholic churches.

In the Máscaras y Morerías book Luján Muñoz included a list of the brands (proprietary marks) that had identified the masks produced by the various Morerías, including the “C J” mark used by the Morerías of Cruz Juárez, in San Miguel Totonicapán and later in San Cristóbal (pp. 67-69) during the 20th century.

In their vivid and detailed compendium—Masks of Guatemalan Traditional Dances (two volumes, 2008)— Joel E. Brown and Giorgio Rossilli included a discussion of these marks (Volume 2, pp. 629-636). and they presented photos of the C J mark (p. 630). I have never owned a mask with this mark, but today we will see six of them from another collection. Although all six have European features, so that we might be quick to call them Spaniards from the Conquest Dance, they could have been worn during La Danza de los Moros y Cristianos, La Conquista, or Los Vaqueros/ Toritos. Mask details sometimes suggest whether a mask can be ascribed to one dance or another.

Jim Peiper, in his Guatemala’s Masks and Drama (2006, page 58) included a photo of a mask with the C J brand, but he attributed it to another morería. This book does contain many wonderful mask photos and much information of interest.

The first of the masks in today’s group has a very dark complexion. We find a very similar mask in Brown and Rossilli (Volume 1, page 60), labeled as a “Moro.”. It has the same colored eyes and the C J mark on the back. 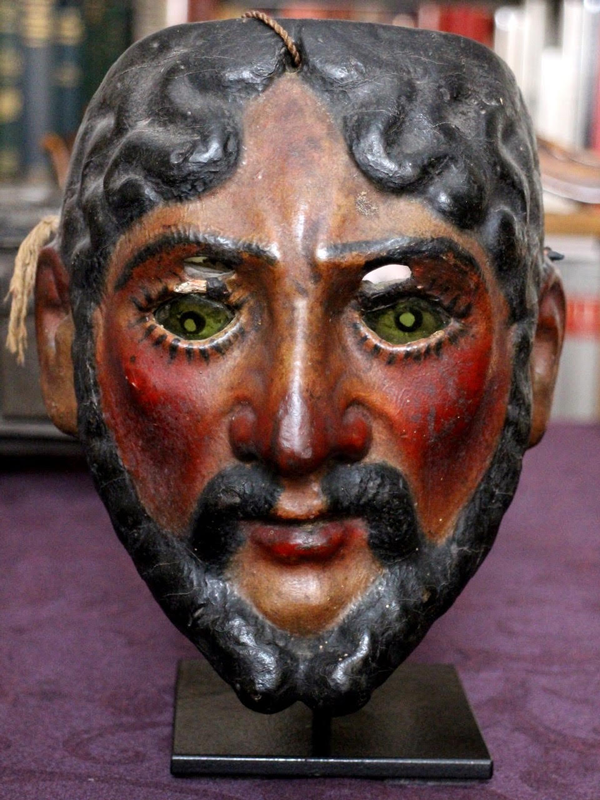 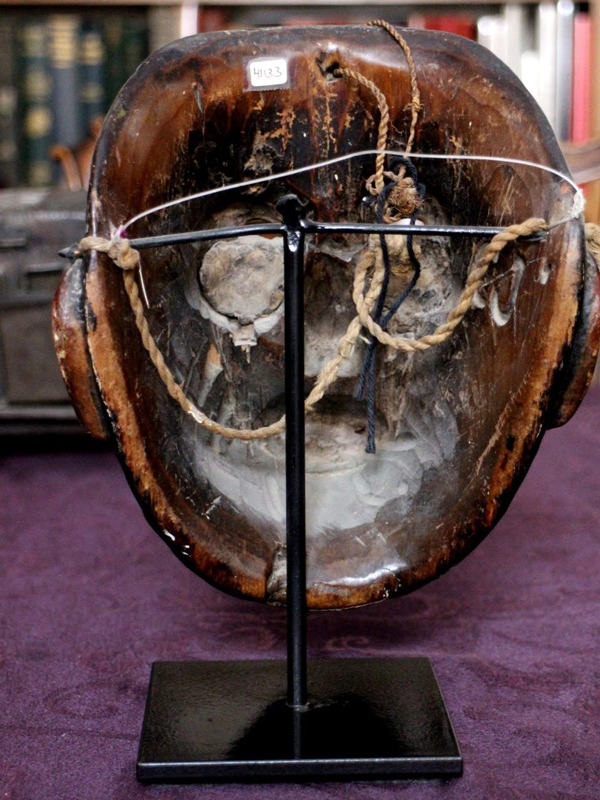 The glass eyes are held in place with wax, and the wax on the left eye apparently had to be replaced. 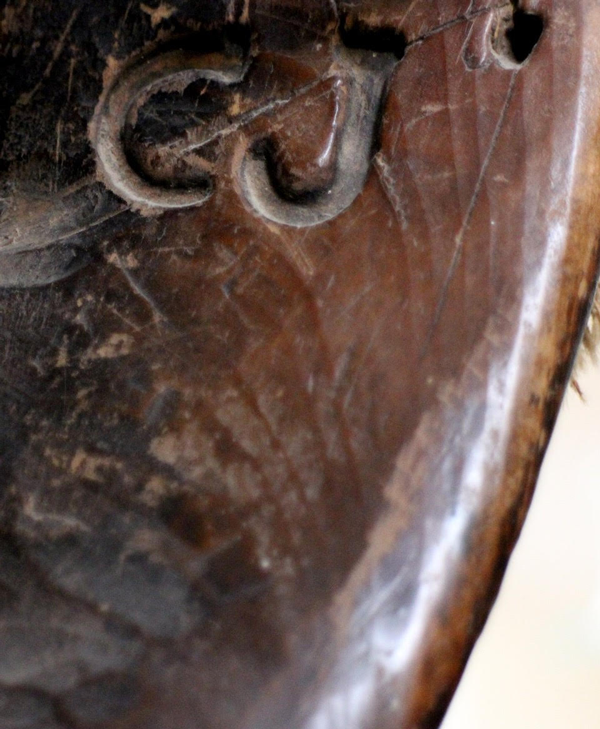 On the right side of the back we find the mark “C J.”

The second mask seems to have marked patina from use, with scuffed paint. 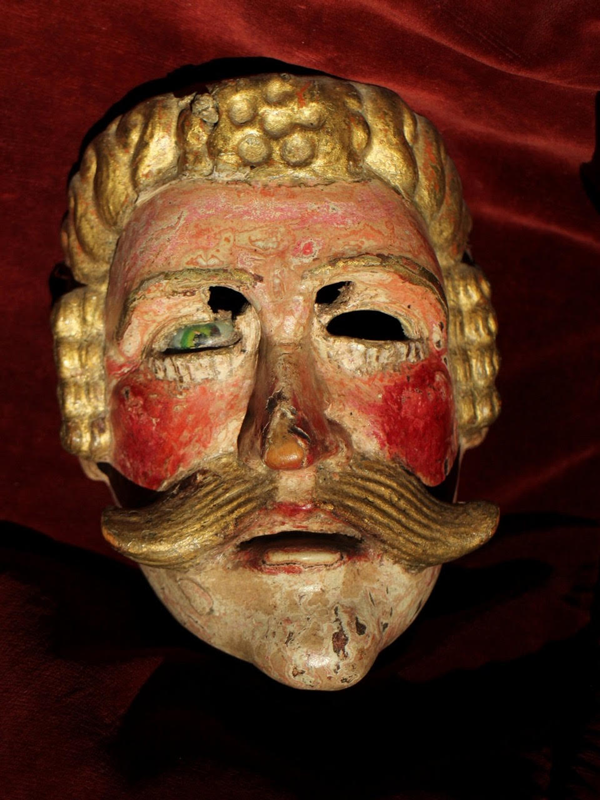 There is a flower on the forehead, a feature often associated with a mask worn by a Vaquero in the Toritos dance. 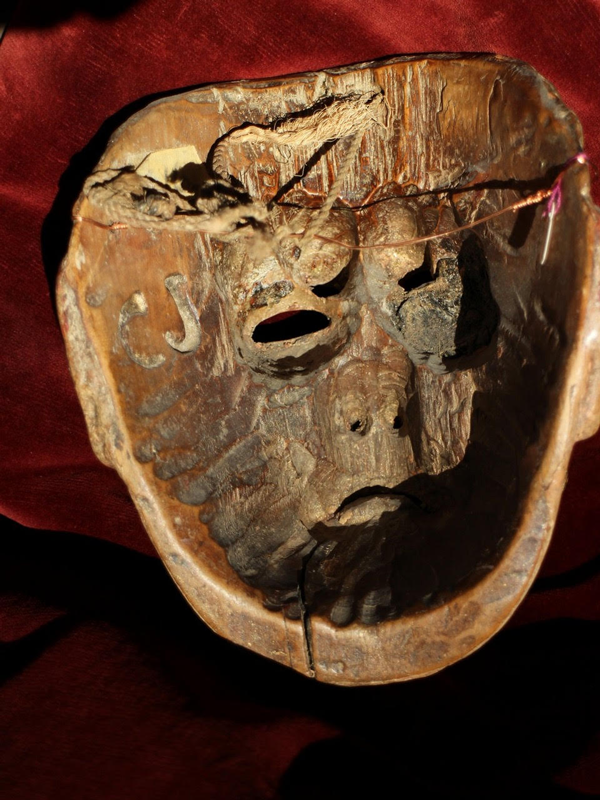 The “C J” mark is on the left side of the back.

The third mask appears to represent Alvarado with his furrowed brows. 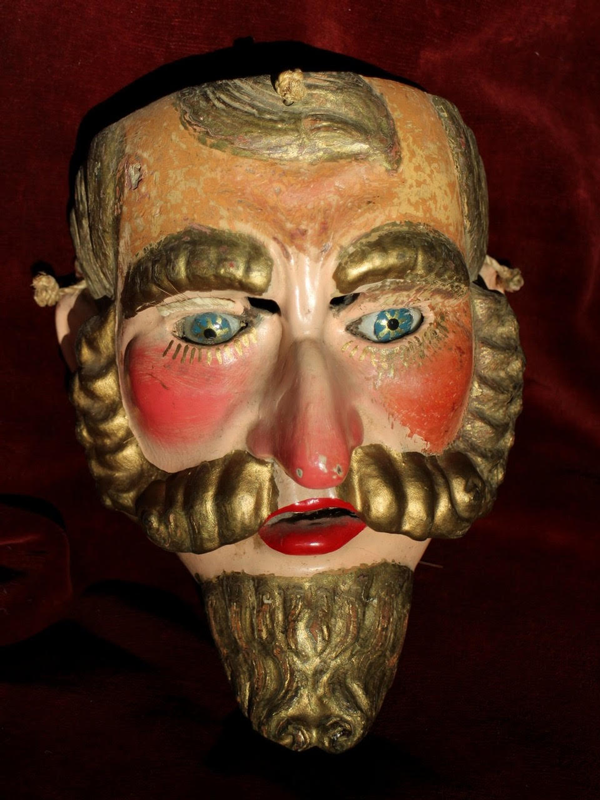 Look at the detailed carving of the beard. 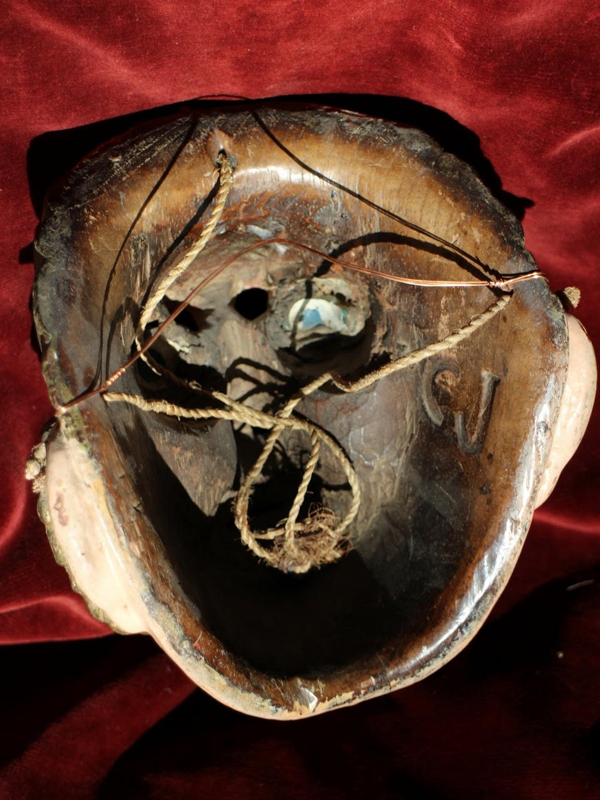 The “C J” brand is on the right side of the back.

The fourth and fifth masks are essentially twins and both also have those knit brows. Both have darker complexions and dark hair, as if they depict Moors or  Indians 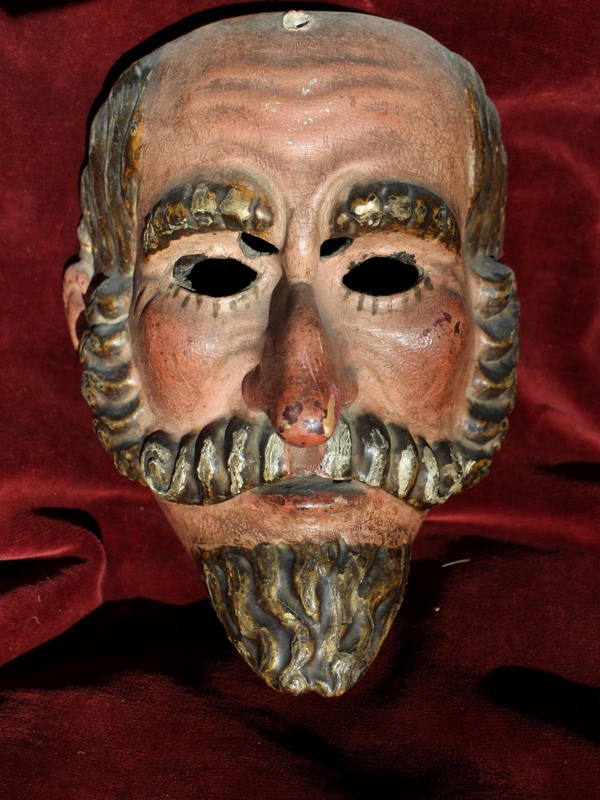 Both of these older masks have lost their glass eyes. As on the mask that preceded them, their mustaches nearly connect with their sideburns, a feature that is often seen on masks from the Cruz Juárez Morería, and on other masks from Totonicapán. 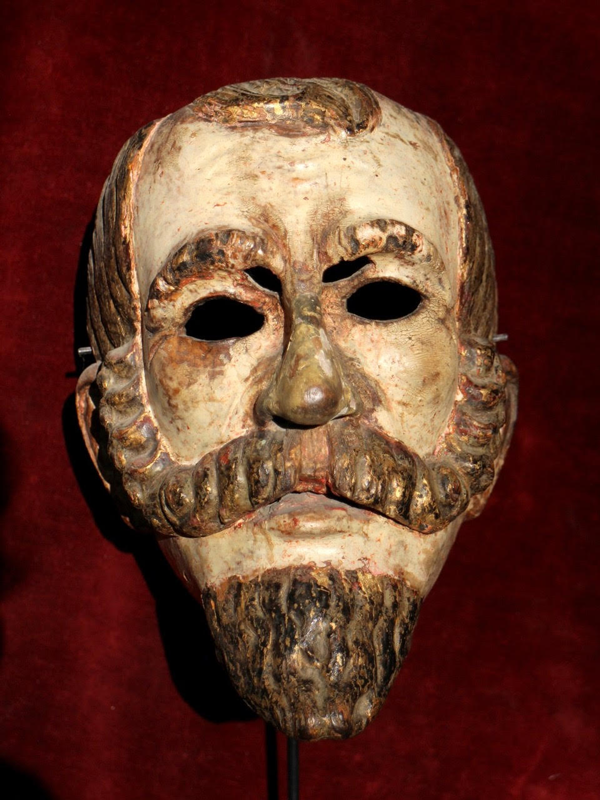 Now this is a very worn old face. I didn’t receive photos of the backs of these two masks, but I was told by the owner that they too had the C J mark.

The last mask of this group is yet another with knit brows. Perhaps such brows are a stylistic feature of this undocumented carver? We find masks very similar to this one in Brown and Rossilli (Volume 1, page 106), said to have been worn by Alvarado in the Conquest dance.  At least one of those also has the C J brand on the back. 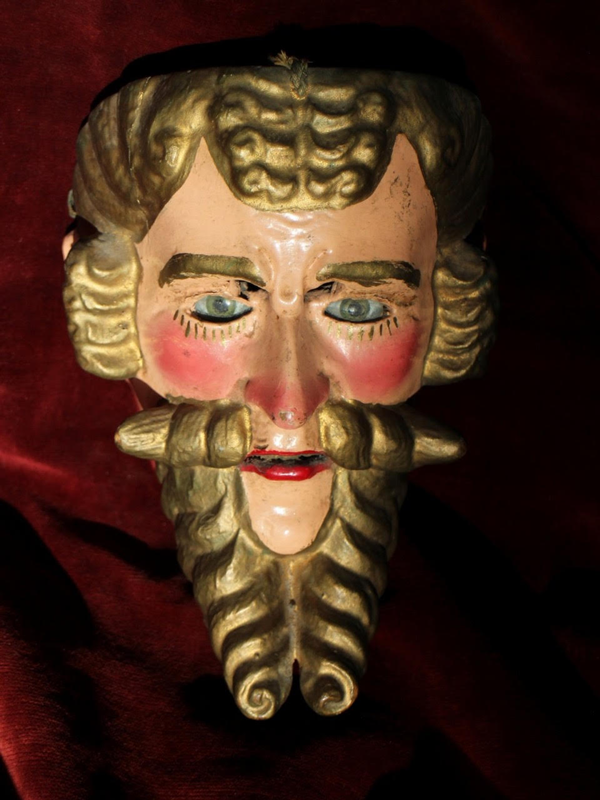 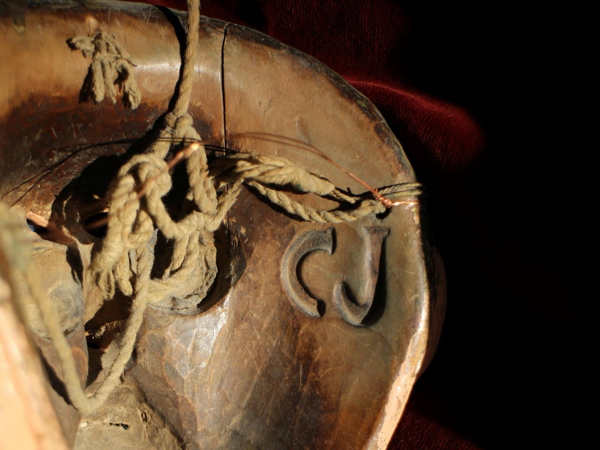 Next week- I have nothing as yet to highlight for next week’s post. Viewers, feel free to send me something interesting.