In Michoacán and Guanajuato, masked devils commonly appear as major characters in the Pastorela performance. Here is a brief synopsis of the Shepherds’ Play, La Pastorela. An Angel appears to Shepherds in their fields, telling them of the birth of Christ in a stable in Bethlehem. The Angel urges the Shepherds to go and pay homage, which they agree to do. The Shepherds enlist a holy but wisecracking hermit, el Hermitaño, to accompany them. As they travel, the Shepherds are approached by a band of Diablos—who are named for and promote “the seven deadly sins,” such as lust, gluttony, … The Diablos attempt to dissuade the Shepherds from continuing their quest, offering them the riches of the world if they will only turn back. Some of the Shepherds, such as Bartolo, are susceptible to such offers and waver in their resolve. The Hermit must exhort them to continue, and there may also be further visits by angels to clear the path of the obstructing Devils. The play ends with the sequence familiar to many North American Christians, as the Hermit and the Shepherds file down the aisle of a church and approach the creche containing the infant Jesus. Here is a video from Carapan, Michoacán featuring a magnificent corps of Pastorela devils, first just one and they build up to six. You will observe that, because the Pastorela is a European import, the “dance” or play comes down to an exchange of orations between the devils, the archangel Michael, and other players.

As you will see, there is great variation in the Diablo masks found within Michoacán. Today I will focus on the masks of one unusual and distinctive carver from Chilcota, Michoacán. His masks are highly distinctive, yet they also reflect the style of this region—La Cañada—which also includes the town of Carapan.

In Lo Efímero y Eterno del Arte Popular Mexicano/ The Ephemeral and Eternal in Mexican Popular Art, published in México City in 1971 as a two volume set in either Spanish or English, Volume 2 is devoted to photos of masks and dances. On page 466 of Volume 2 there are photos of two rare and unusual Pastorela Diablo masks from Michoacán, plates 396 and 397. Plate 396 reveals a canine faced diablo with huge wooden fangs, an oversized extended tongue, and a miniature devil crouching on the bridge of the nose. A footnote only tells us that this mask was from the “Danza de los Diablos (?)” in the Mexican state of Michoacán. I have never seen one like this, except in this photo, but it is certainly from the Pastorela dance. Plate 397 shows a devil with a bull’s face, with seven tiny devils’ heads in a line across the forehead. This mask was photographed in the collection of the Museo Regional de Artes Populares de Pátzcuaro, Michoacán, but the note says nothing further about its provenience. I have two masks of this style in my collection and I have seen another that is identical to one of mine. Today’s post will feature my two examples. I purchased both of them in June, 1988. These masks were found in Chilcota, Michoacán, 1n 1987. I do not know the carver’s name.

The first one has an ambiguous face. Is this a dog or a bull? Perhaps this ambiguity is purposeful, to create a frightening and evil appearance? I bought ths mask directly from Robin and Barbara Cleaver. 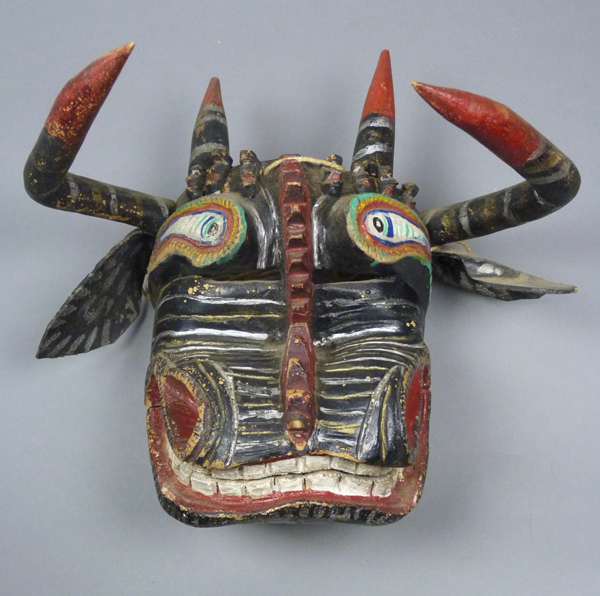 The four horns are constructed from carved tree branches, while the ears are leather. The vision slits are located below the elaborately painted eyes. 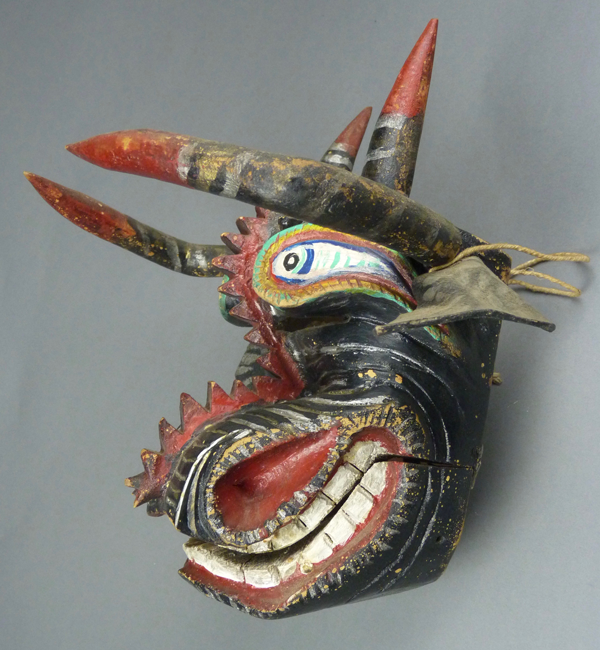 The face of this mask has a remarkable jaunty shape. I don’t know what to make of the red crest that runs down the center of the mask, which is characteristic of this local region—La Cañada (a remote mountainous area). Evidently we are meant to understand that this is no ordinary animal; this is a beast from Hell. 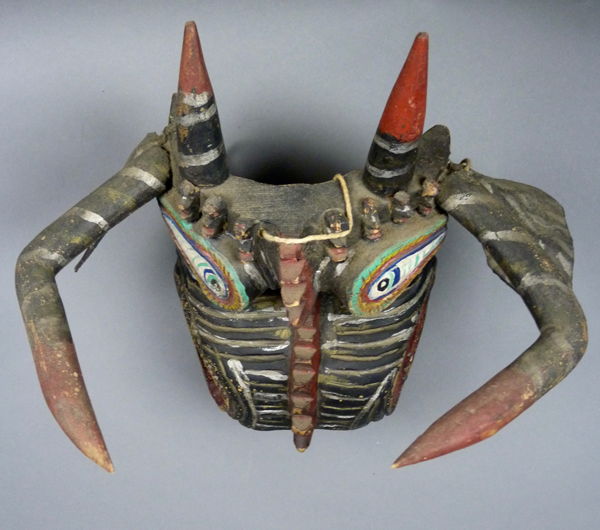 In this view from above, one can easily count the seven devils, three on one side and four on the other. They were applied to the face with glue. 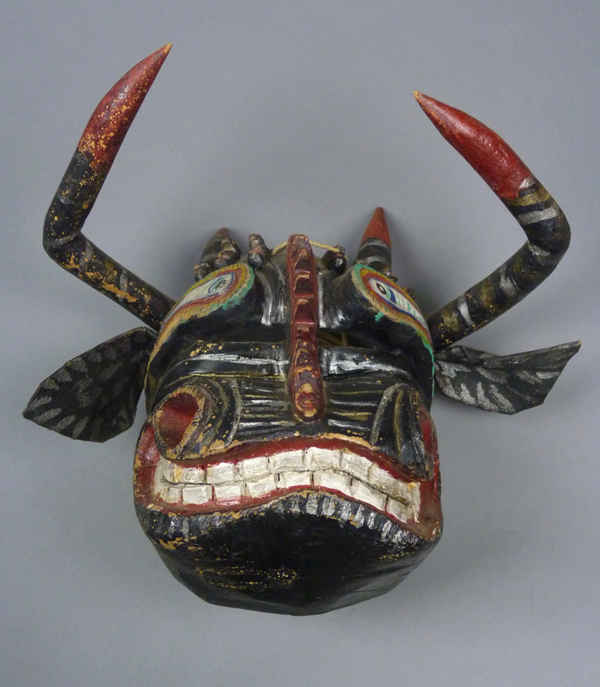 I have untangled the string that obscured one of the little faces. 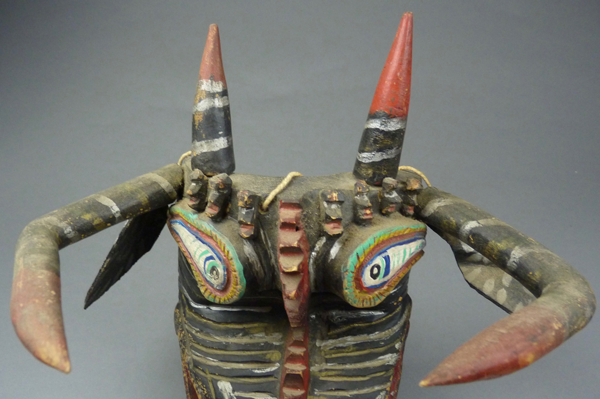 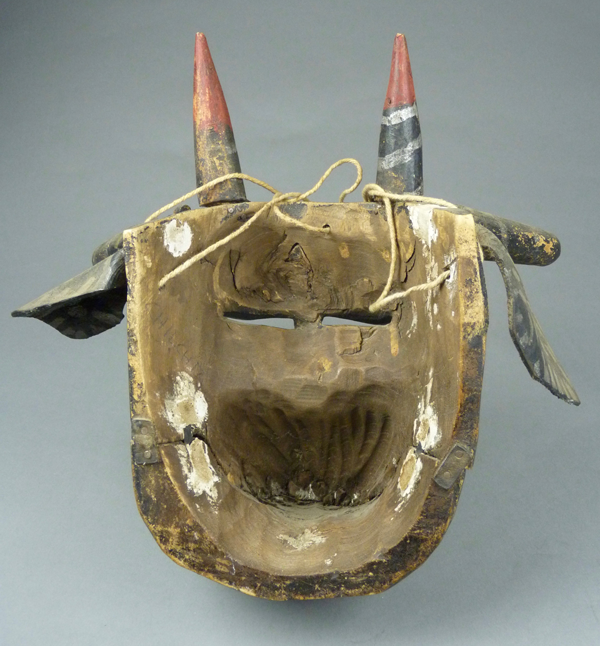 The back appears to have been stained, which we will see again on some other masks from Michoacán. Perhaps this is meant to protect the wood from infestation. The leather strips on the back edge attach the jaw to the rest of the mask. The white daubs of plaster, above and below the joint between jaw and mask, cover attachment points for rubber bands that are meant to allow the jaw to bounce open and closed. The other plastered areas cover the ends of the attached curved horns. Chilcota is written in pencil on the back, probably at the time when this mask was purchased from a picker in Michoacán.

The next mask, with the obvious form of a wolf or coyote, is otherwise very similar to the one above. I bought this mask from Spencer Throckmorton, but he had purchased it from the Cleavers, who kept another like it for themselves. They had brought all three up from México. 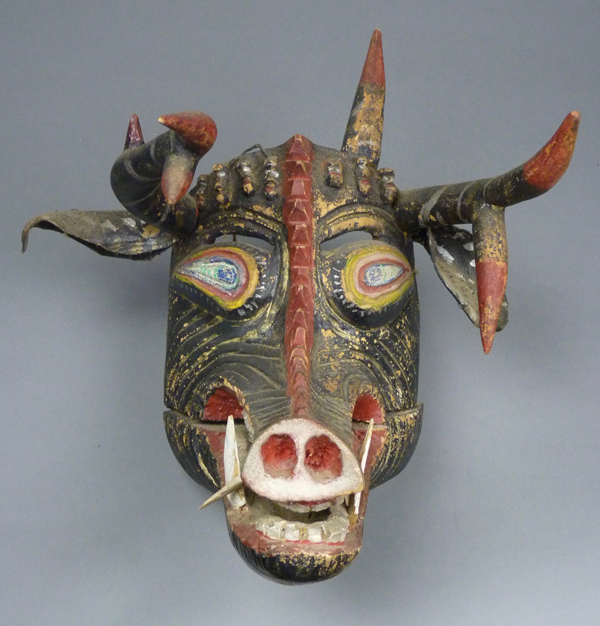 The eyes have the same unusual paint, but the vision slits are above rather than below the painted eyes. One of the vertical horns is missing. 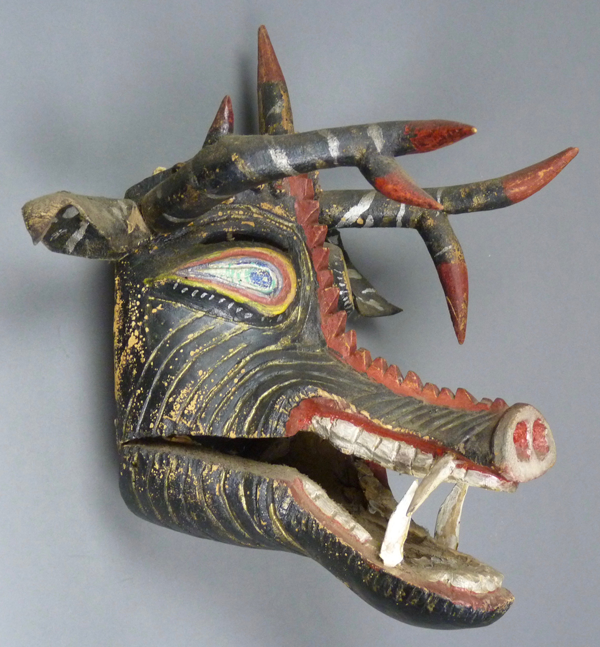 We see the same red crest. The jaw is hanging open in this side view. Isn’t this a remarkable sculpture? 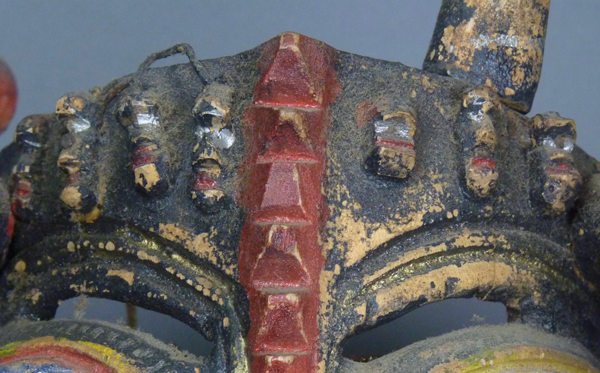 The seven devils across the forehead appear to have been carved in place, but this may be an illusion. On this mask the horns were carved from branches. 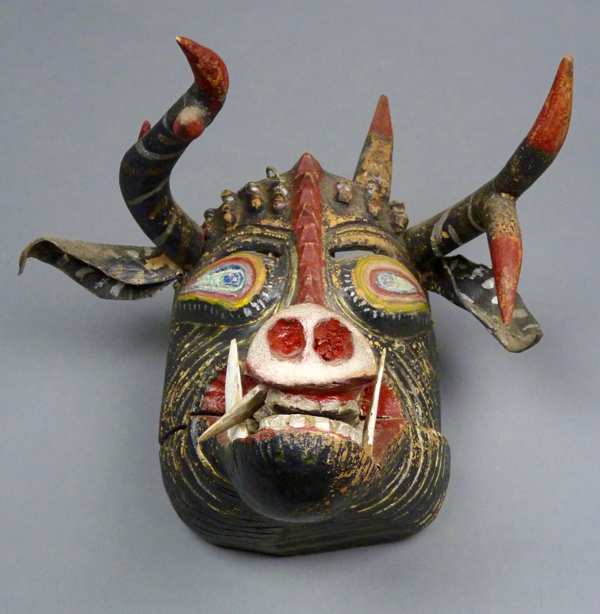 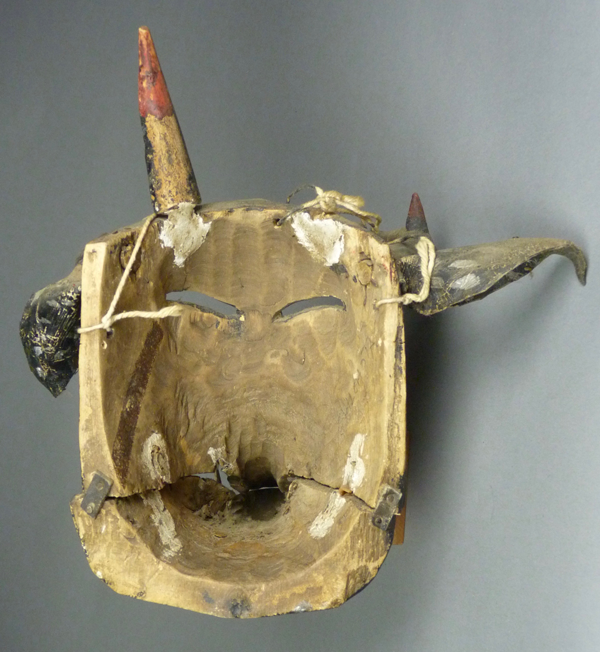 The back has the same stained appearance, as if it was given some protective coating. The embedded rubber bands that allowed the lower jaw to jiggle have broken.

Next week we will look at some other Pastorela masks from the La Cañada area of Michoacán—a trio of similar diablo masks by other carvers and an Hermitaño.