Today we will look at some additional masks from La Cañada,  a fertile valley in the mountains of northern Michoacán. This valley contains a string of eleven towns— the “Once Pueblos.” According to Robert C. West, in Cultural Geography of the Modern Tarascan Area (1948, pages 18-22, 25), La Cañada is one of several “resistant cores” in Michoacán where the Tarascan Indians have maintained a dense presence and continue to speak their traditional language. Chilcota, the town where the masks in last week’s post were collected, is the county  seat of this Municipio, also named Chilcota, and today’s masks will certainly remind you of the pair that I featured last week. We will see masks from three neighboring towns in today’s post—Tanaquillo (or Tonoquillo, per West), Ichán, and Santo Tomás, all originally collected in these towns by Jaled Myaes and Estela Ogazon. I purchased them from Robin and Barbara Cleaver in 1988.

To get you in the proper mood to appreciate these masks, here is another Pastorela video, this one from Ichán, where one of today’s masks was collected in about 1987. We may be seeing the same Diablos that were featured in last week’s video. It begins with a child Angel (an Angelito) delivering a stern lecture to Luzbel (Lucifer, aka Satan), to the effect that God will defeat all evil. Luzbel replies  ferociously that he intends to rule the world. We see how vividly children in México are drawn into their (Roman Catholic/Tarascan Indian) experience of Christianity! In passing, you may not be aware that in the Roman Catholic tradition Angels are considered to be without gender, so all of these child angels are referred to as Angelitos, whether portrayed by boys or girls. These Angelitos (and Archangels, such as San Miguel) pass a portable microphone from one speaker to the next, so you can determine who is talking by looking for the microphone.

And here is a Diablo mask collected in Ichán. It is at least 30 years old and probably more, but we see similar masks in contemporary use in the video. 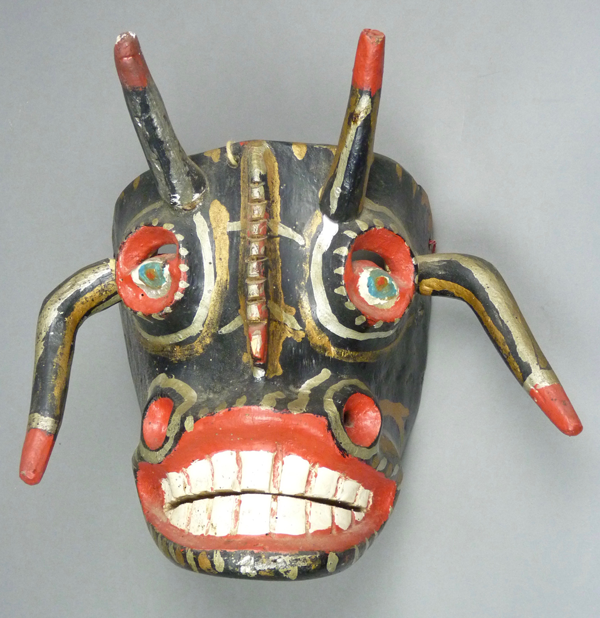 Today we look at three Diablo masks, one from each of three Tarascan Indian towns in La Cañada. What I like so much about this trio is that not only were they collected in three different towns, but also that they are obviously by three different carvers with three distinctive individual styles. To top it off, the Pastorela Dance is still being performed in all three towns, 30 years after these masks were collected, and probably 40 years after they were originally carved. Let’s look at this mask for unique design details that will distinguish it from the two that follow and from those collected in nearby Chilcota that we saw last week.

The most distinctive features of this mask are the round elevated areas that contain crescent shaped vision slits and painted eyes. In all of Mexico I have never seen any other eyes that were exactly like these! Otherwise, note that the upper horns emerge from the forehead rather than from the top edge. A third notable detail is that the round nostrils on the face of the mask are matched by deep bowl-shaped hollows on the back, another extremely unusual feature. 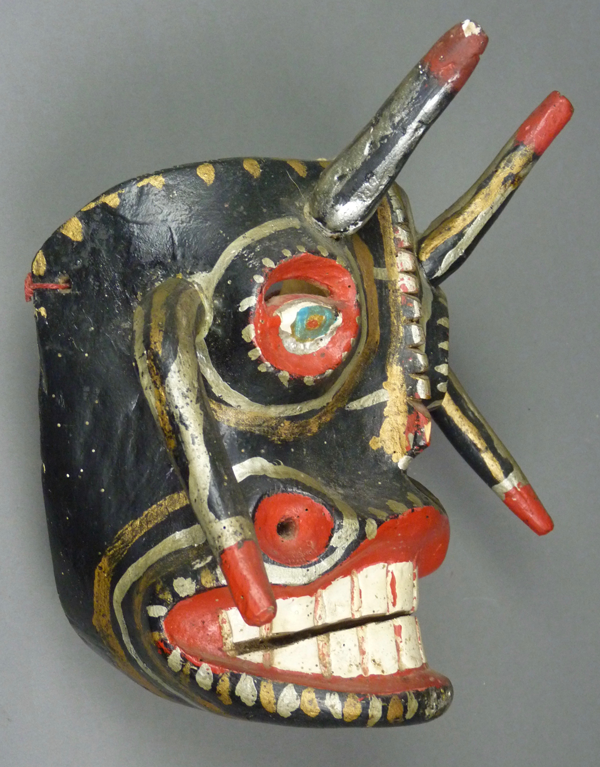 This mask does not have an articulated jaw. Perhaps the articulated jaws are reserved for the more prominent of the Diablos, such as Lucifer (Satan). In the YouTube™ video, you may have noticed that one of the Diablos is portrayed by a small child; maybe this smaller and less elaborate mask was also worn by a child. 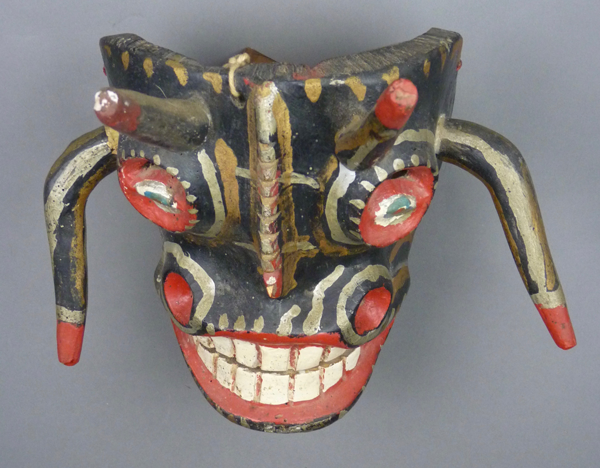 This mask does have the vertical red (with the addition of gold) crest running down the midline that we saw on the masks from Chilcota. This red crest is apparently a regional characteristic. 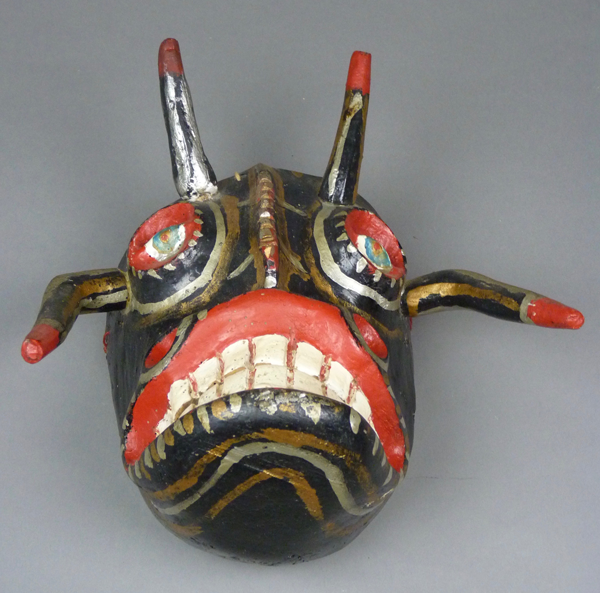 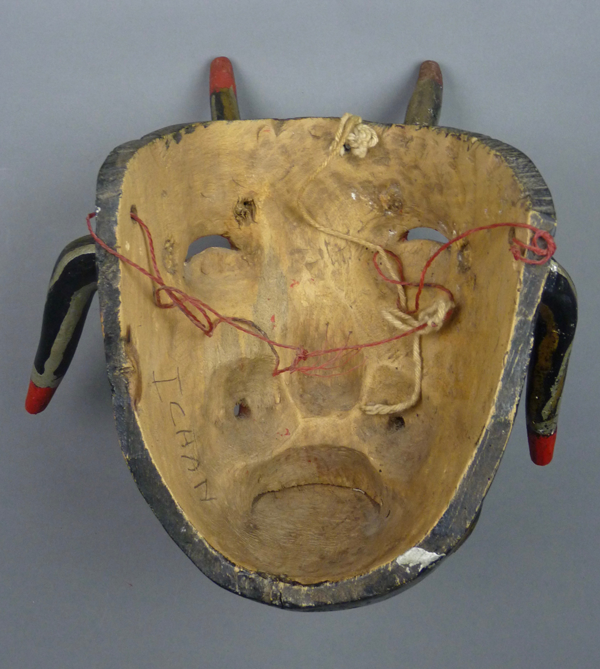 The back of this mask has these distinctive bowl-shaped hollow areas behind the nostrils. There is a narrow carved slit between the upper and lower jaws that would provide very little ventilation. Of course the hinged jaws on the other masks allow plenty of air exchange.

The next mask is from the village of Tanaquillo, which is only about 4 miles down the road from Ichán. You will immediately have the opportunity to see the obvious differences in style between this mask and the last. Most obviously, round vision openings are carved within red relief carved areas that have a diagonal orientation and pointed outer ends. 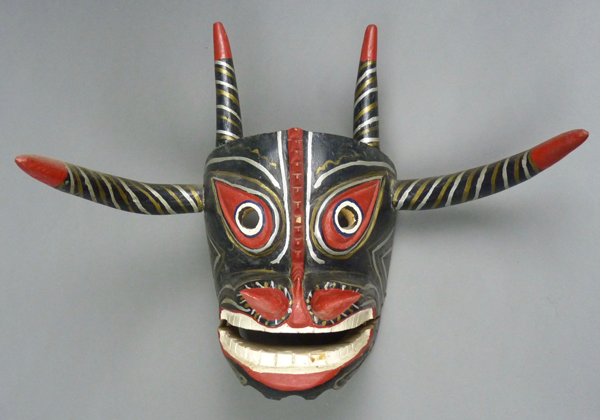 There are dramatic nares but the nostrils are not drilled to communicate with the interior of the mask. 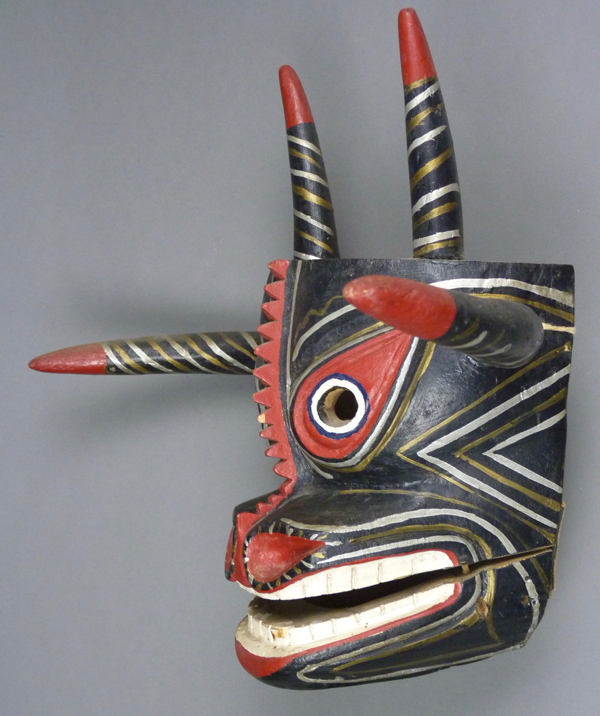 On the other hand, this mask has the typical local layout of two straight horns protruding from the top and two curving horns that emerge from the temples, the jaw is articulated, and we find the dramatic red crest in the midline that was so impressive on the masks from Chilcota. In other words, as we compare these masks, it becomes apparent that there are local characteristics along with other stylistic details that have been provided by the individual carver. 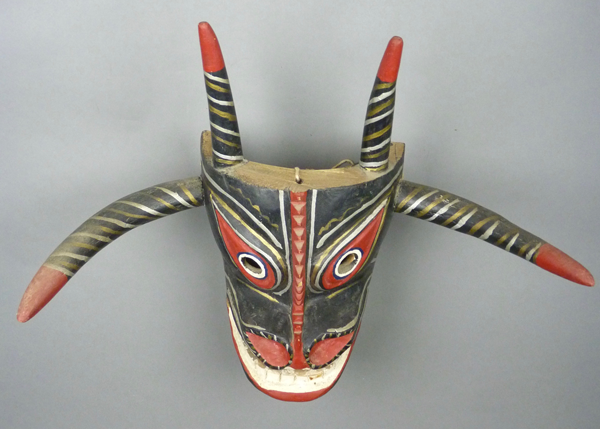 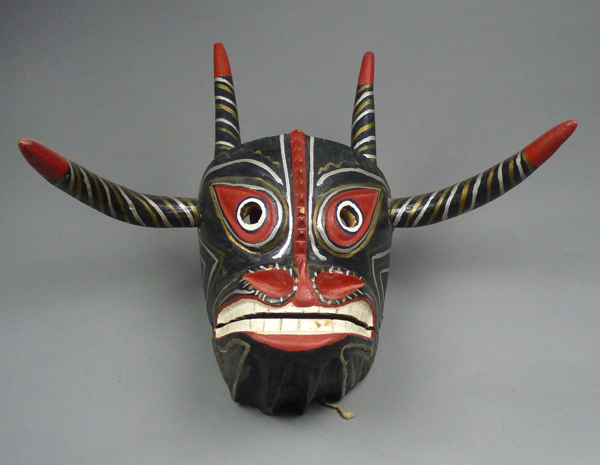 There are grooves or notches under the chin. This mask is is 11 inches tall, 6½ inches wide, and 5 inches deep. It is 14 inches wide if we count the horns. 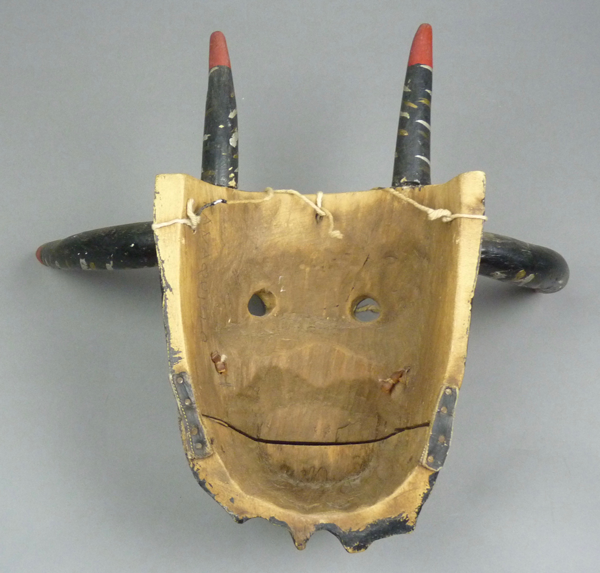 The jaw will flap open to allow air passage, and there are no openings from the nostrils for ventilation. The rubber bands that suspended the lower jaw have disintegrated, leaving only their upper ends, still tied to the mask.

The third of these masks was collected in Santo Tomás, a town that is one mile to the East of Tanaquillo and three miles to the west of Ichán. Midway between Tanaquillo and Santo Tomás is the village of Acachuén, just a half mile from either of those other villages. According to Máscaras Purépechas: Catálogo 2002, a publication of the Casa de las Artesanías de Micoacán de Ocampo, in Morelia, Michoacán (page 23, plate 53), masks in the style of this next mask were carved by Gregorio Trinidad Marcos of Acachuén. I highly recommend this book to you; it is sometimes offered for sale on EBay™. 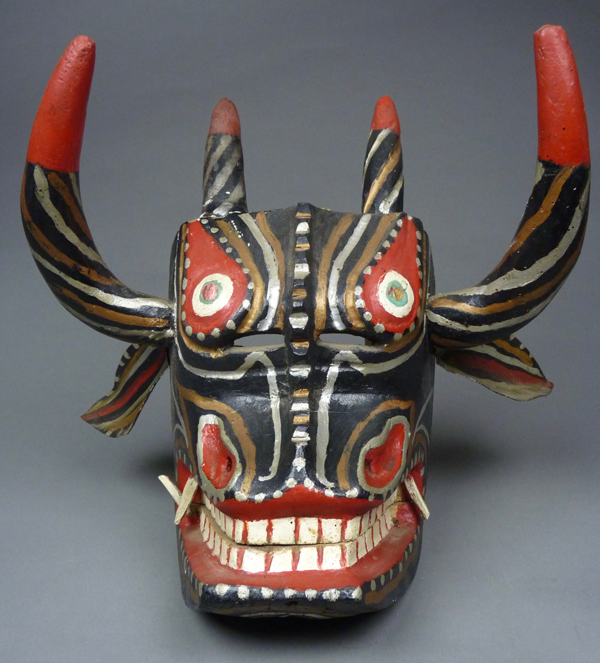 The vision slits under the painted relief carved eyes are similar to those on the two masks from Chilcota. The ridge is also similar, but less dramatically carved.

The ears are tin. 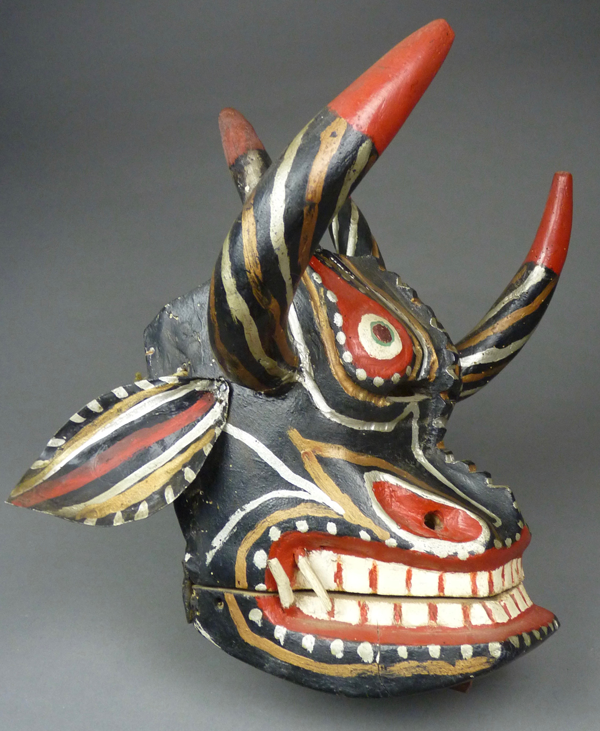 The horns are also mounted like those from Chilcota. 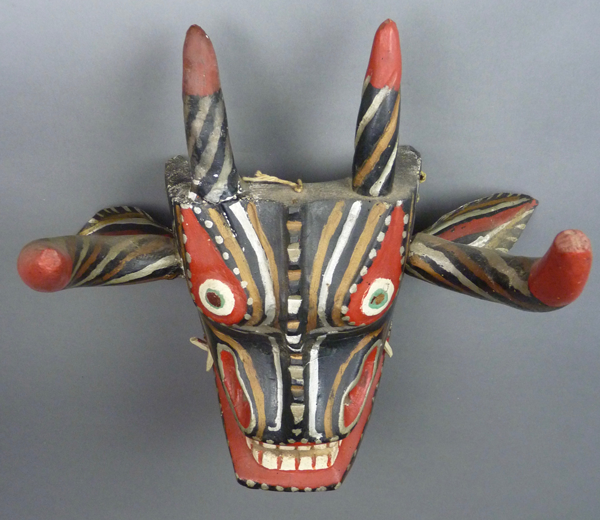 The bottom of this mask is not grooved, but it is painted in an interesting manner. 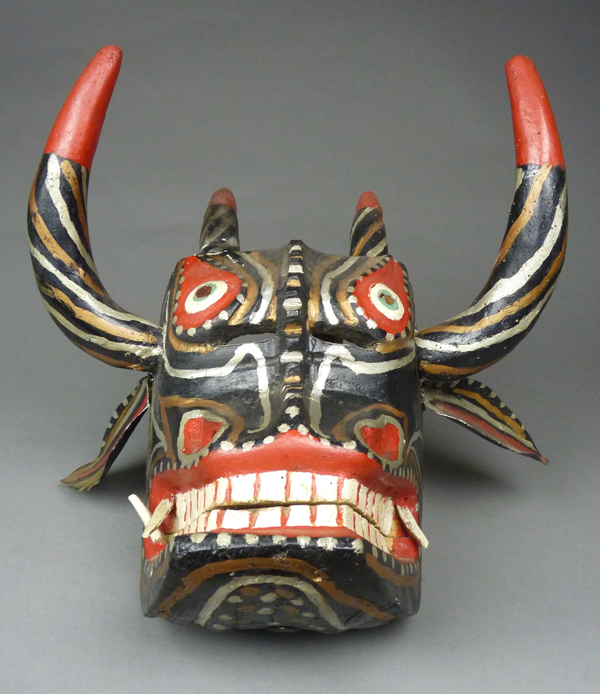 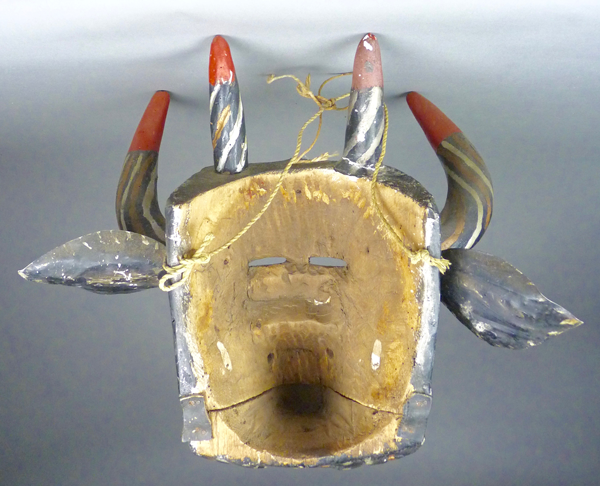 The back of this mask is deeply hollowed, due to the extended mouth.

Although the Diablo from Santo Tomás was carved in the style of Gregorio Trinidad Marcos of Acachuén, this Hermitaño from Santo Tomás is clearly not typical of his work, or that of any of the other carvers in the Catálogo. Here is a Youtube™ video from Tanaquillo to illustrate the tendency, in the La Cañada towns, for there to be a corps of Hermits.

This older mask appears to have been carved by a local santero (a carver of saints), as the ears are very carefully shaped, although such details are obscured by layers of old paint. 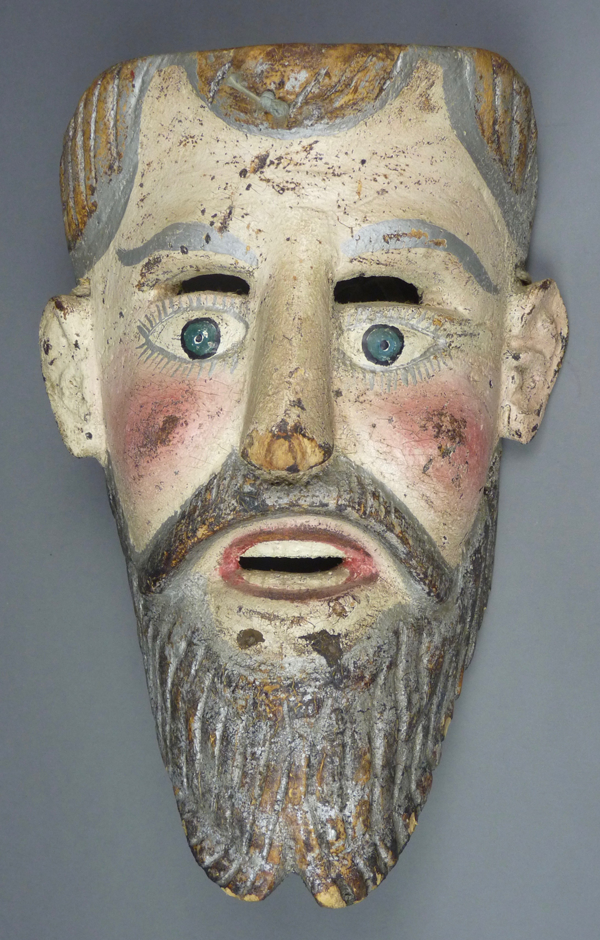 It is very typical for this area to find that silver paint has been used to suggest the gray hair of the Hermits. 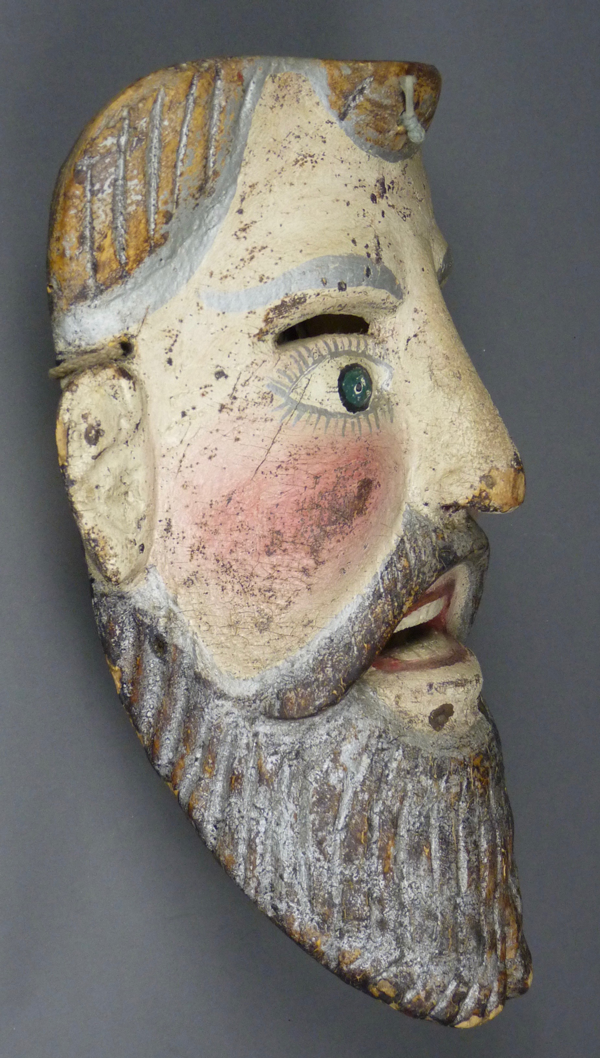 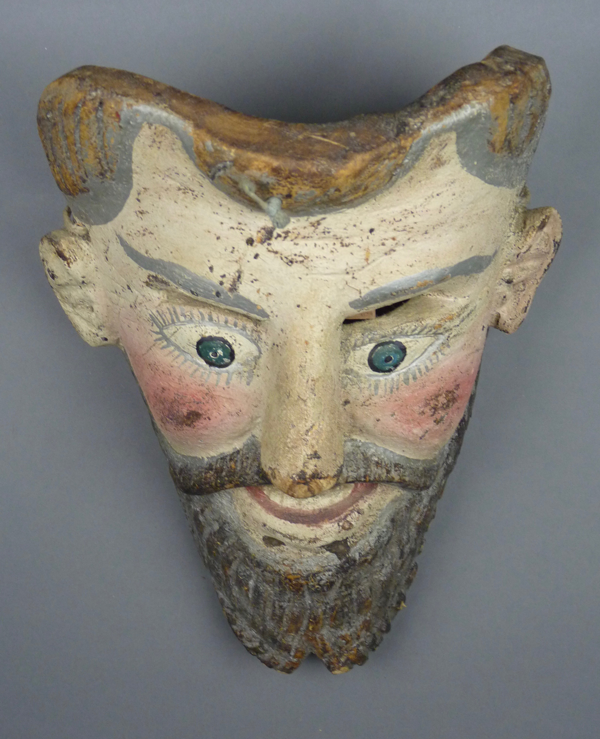 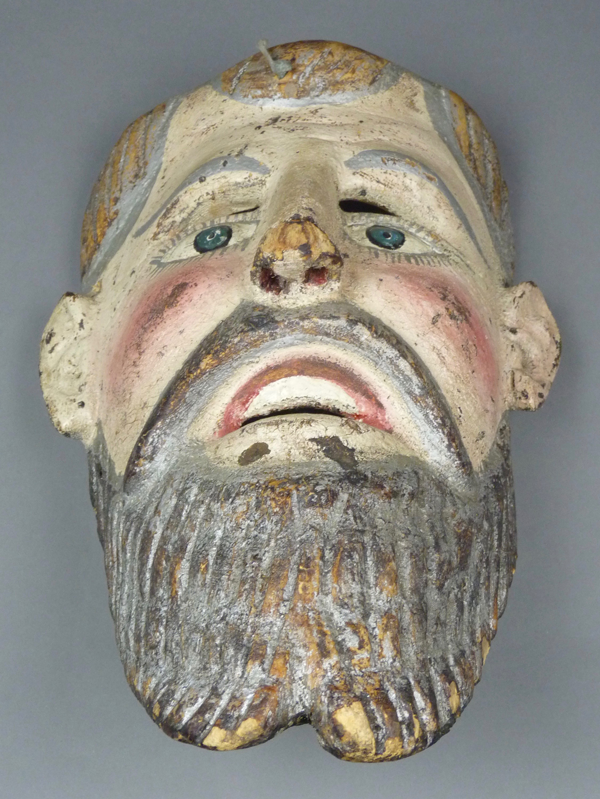 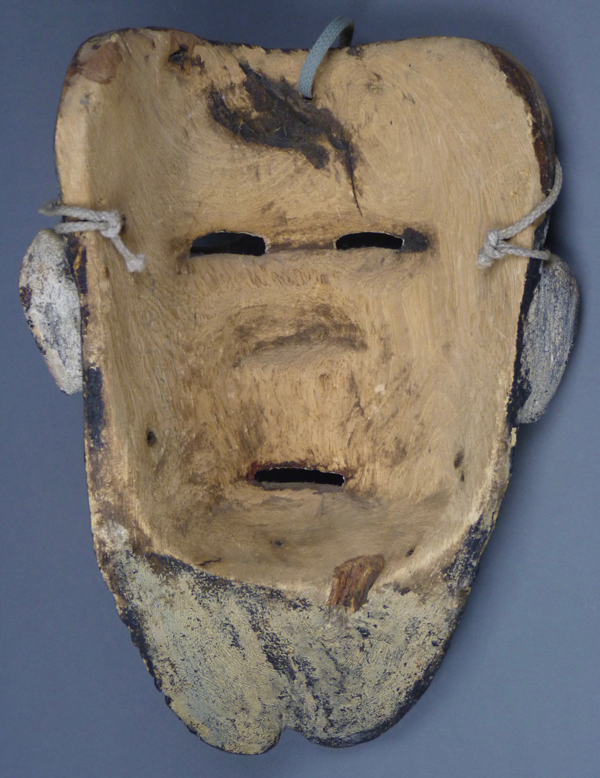 The back of this mask is quite worn, but probably also scrubbed.

Next week we will look at some larger Diablo masks that were collected in other regions in Michoacán.