I decided to begin a series of posts about Mayo Pascola masks today. I hope that you like them.

In March 1988 I purchased my first two Mayo Pascola masks from Robin and Barbara Cleaver of Santa Fe, New Mexico. These masks had been brought North from Mexico by a Mexican “runner” (picker), Roberto Ruiz. Over time, Roberto turned out to be the original source of many other Yaqui and Mayo Pascola masks that entered my collection, but I first heard of him in connection with this pair. That same Roberto had collected two Mayo Goat Pascola masks that I bought very recently on EBay™, and included in my post of July 30, 2018. Masks supplied by Roberto were sometimes accompanied by information of variable reliability about the town of origin, the name of the carver, the estimated length of use, and perhaps even the name of the dancer who last used the mask, but in this case there was very limited information.

Here is the first of the Mayo Pascola masks that I purchased in 1988. It was said to have been found in La Bocana, in the Municipio of Etchojoa, Sonora. I eventually learned, from Tom Kolaz, that this mask had design features typical of a well known Mayo carver, Candelario Verduga, who had lived in La Bocana. He is deceased.

Here is a YouTube™ video from Pueblo Viejo, a Rio Mayo town that is just 5 km. north of La Bocana. You will see that Mayo Pascola dancers wear shirts, instead of dancing  bare-chested as Yaqui Pascolas do, but otherwise their dance accessories, costume, and style are quite similar to those of Yaqui dancers. 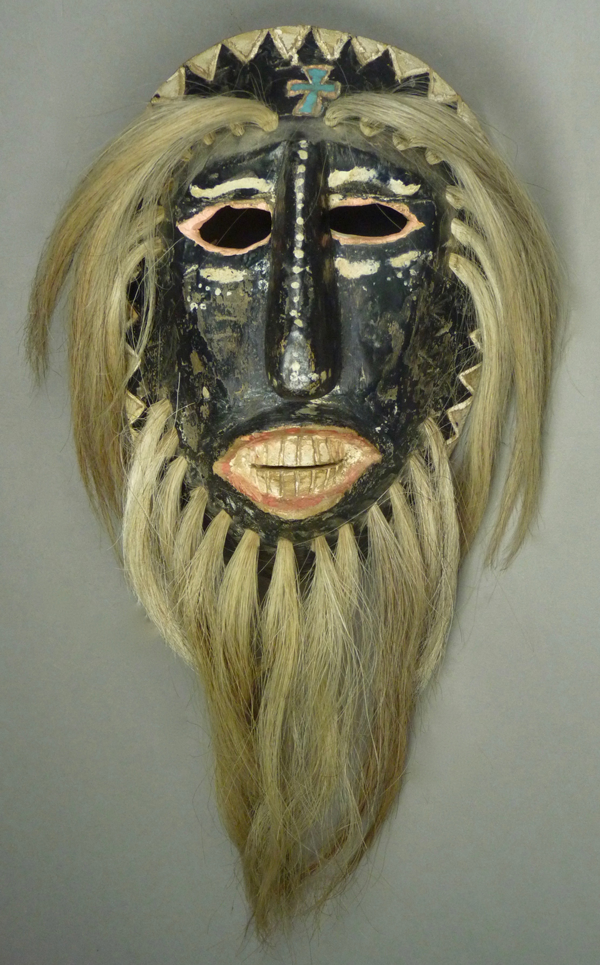 This is an older mask with great patina. I believe that it dates to the 1960s or 70s. It served me as a wonderful introduction to Mayo Pascola masks.

Candelario Verduga was a member of a generation of carvers working at that time in villages along the Rio Mayo, such as La Bocana and Pueblo Viejo, Sonora, who were introduced to North American collectors through James Griffith’s Masters thesis—Rio Mayo Pascola Masks: A Study in Style, which appeared in 1967, 50 years ago.  The actual field work took place in the spring of 1965. Four masks by Candelario were included in Griffith’s comparison study, M16, M17, M18, and P21 (pp. 30, 51). Of these, M18 (fig. 13d) is the most typical, M16 (fig. 13 b) was so heavily repainted that it is difficult to recognize as Candelario’s, and M17 (fig. 13c) is highly atypical, in that the Mayo Pascolas living along the Rio Mayo seldom wear goat-faced masks. All three of those masks are currently available for your inspection at the Arizona State Museum in Tucson, Arizona, along with another that was not in Griffith’s study (ASM# 78-53-27). A photo of P21 (from a private collection) does not appear in the manuscript. Miraculously, that thesis is currently available to be viewed on the Internet; here is the link. Scroll down on the page that appears to find the “download” box on the lower right. Left click on that to download the document.

Griffith reported that Candelario was not only a carver of Pascola masks, but also a musician who played the flute and drum to accompany the Pascola’s dancing.

Note the unusual shape of the nose on this mask. We will see a similar shape on other masks by Candelario in today’s post. 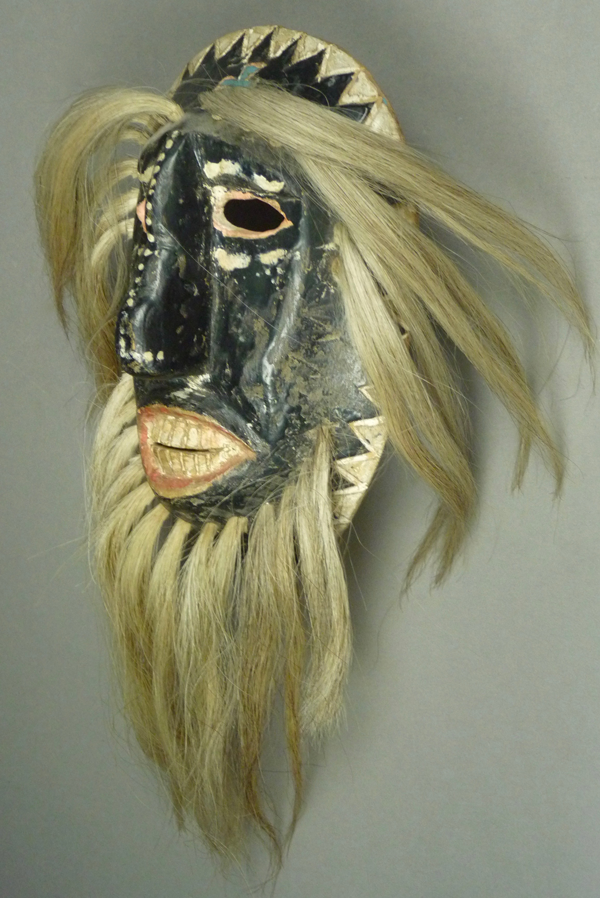 The forehead cross is outlined by a sunken, carved out border that resembles a moat; the surface of the cross is at the same level as the forehead of the mask. The triangles of the rim design were also outlined by deeply inscribed lines. 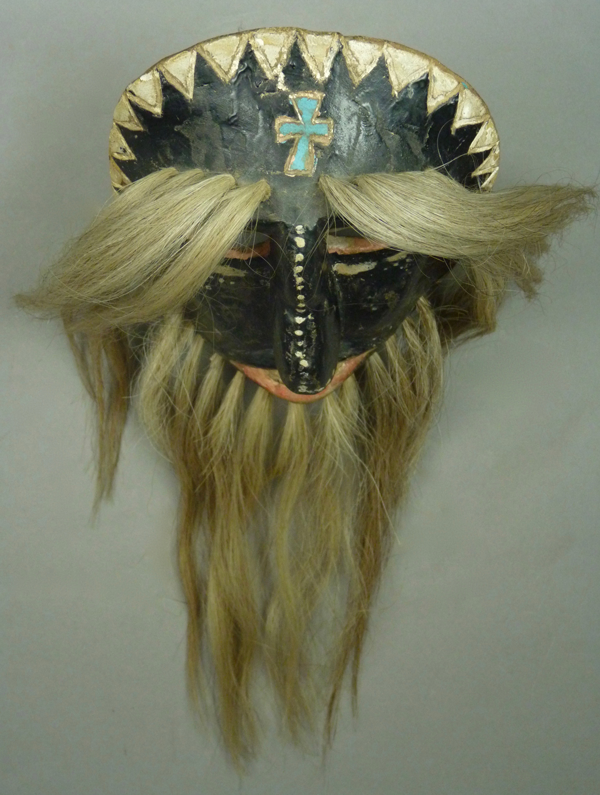 The eyes are almond shaped. The mouth is carefully carved. 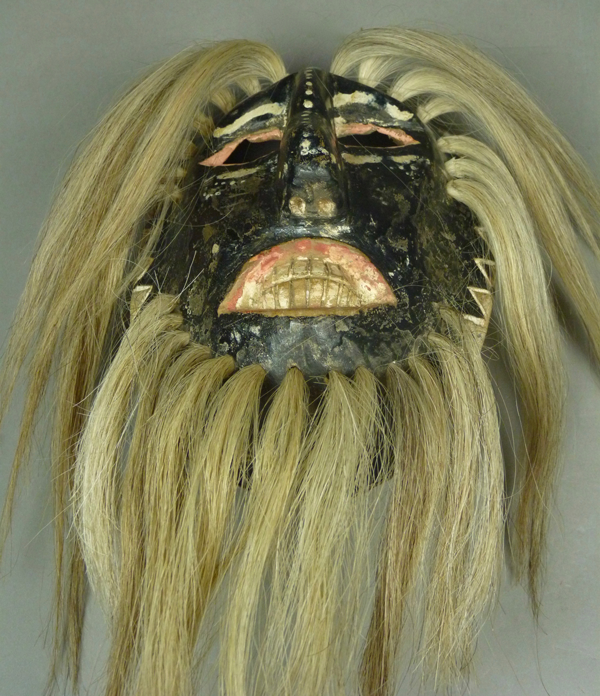 This mask is 8 inches tall, 5½ inches wide, and 2½ inches deep. I don’t have measurements for the other four masks that follow. 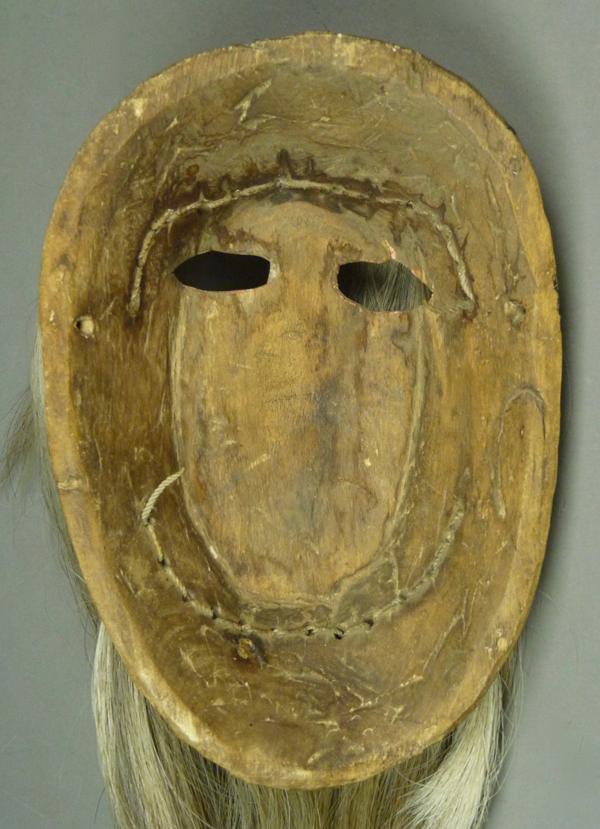 The back is markedly stained from very long use.

The second mask, so obviously by the same hand as the first, has a sagging lower lip. I took this photo when the mask was in the collection of Jerry Collings of Silver City, New Mexico. Since then it was acquired by Gallery West, in Tucson. It had been collected in the field by Barney Burns in 1985. 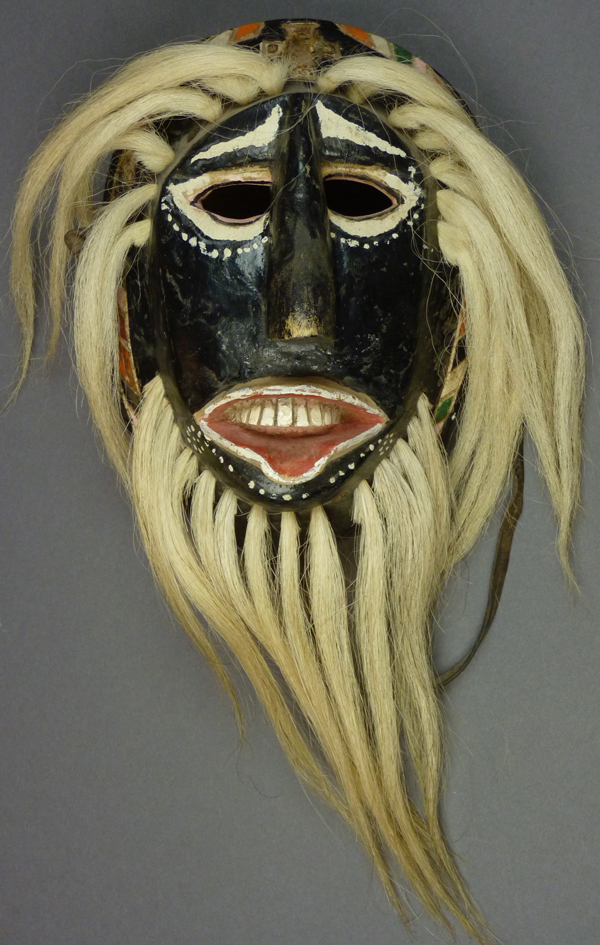 This a splendid mask. Note the almond shaped eyes and the carefully carved teeth. 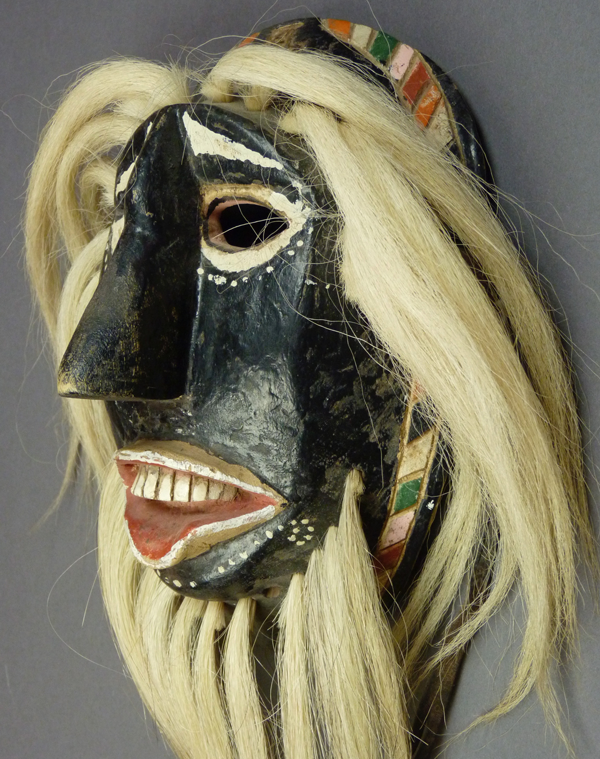 The humped nose is finely carved in this side view. The rim design is unusually colorful. The mask in the Arizona State Museum that is not from the Griffith thesis (ASM# 78-53-27) has a similar rim design. 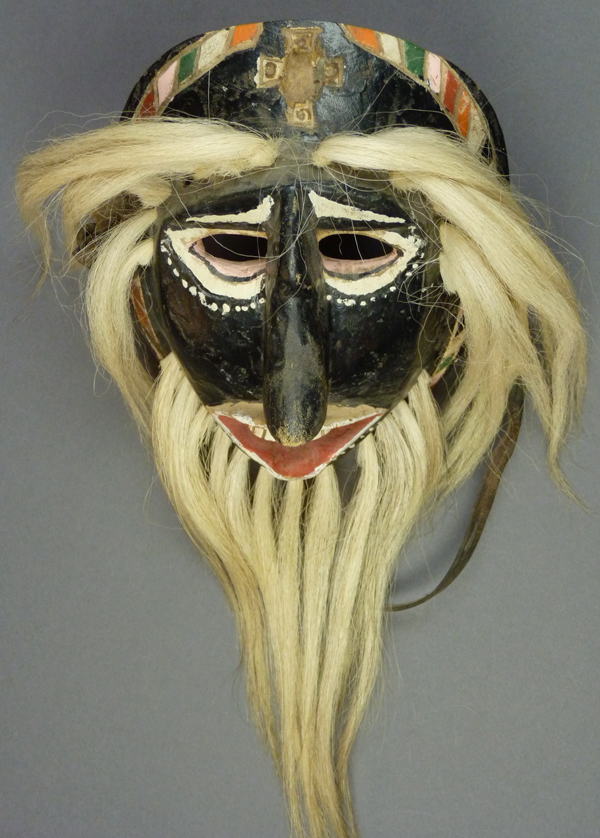 The forehead cross, outlined with an incised border, once had inlaid “jewels.” These have been lost. 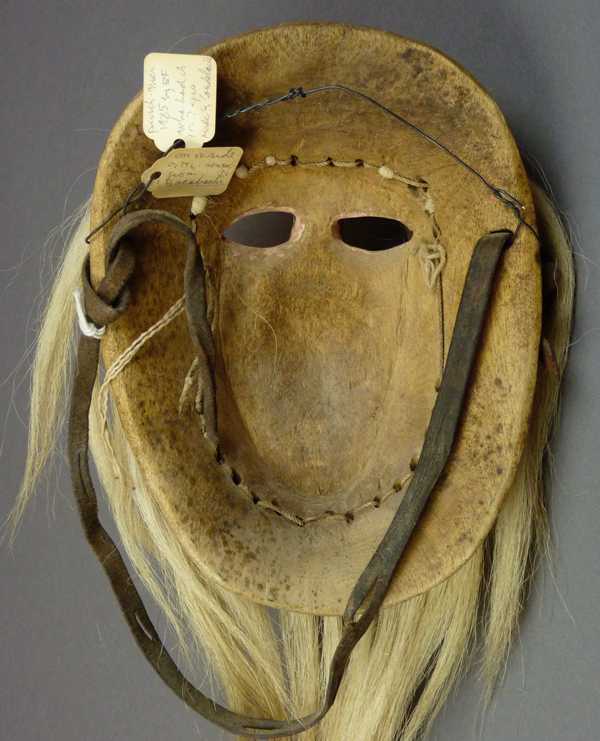 This is another mask with great age and heavy staining from use. There is an old leather strap.

The third mask was photographed when still in the collection of Barney Burns and Mahina Drees.  It had lost its tag, and so came with no provenance, but it was obviously so similar to the first mask to leave no doubt as to the maker. 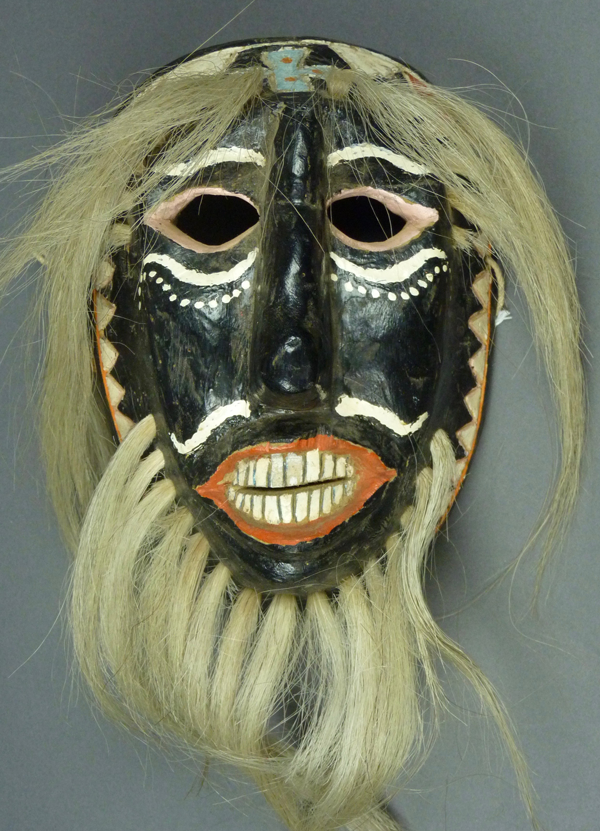 Note Candelario’s fondness for decorating his masks with painted dots, and for the use of many colors beyond the traditional red, white, and black. 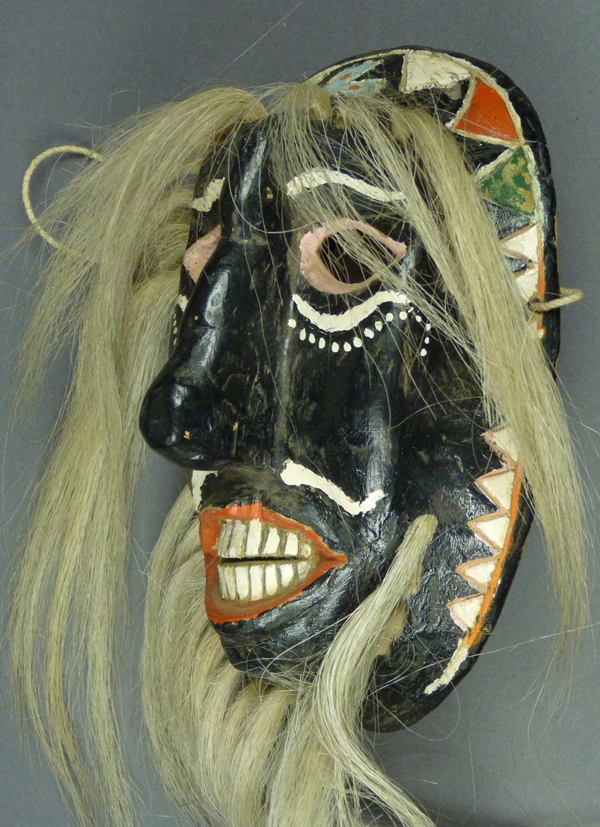 This forehead cross is quite similar to the one on the first mask. 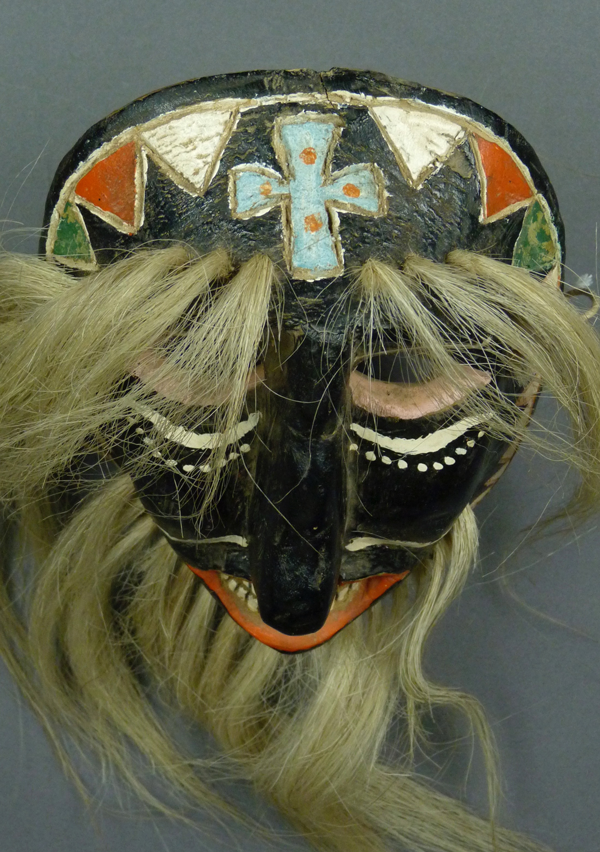 Also similar to the first are the incised triangles that make up the rim design. 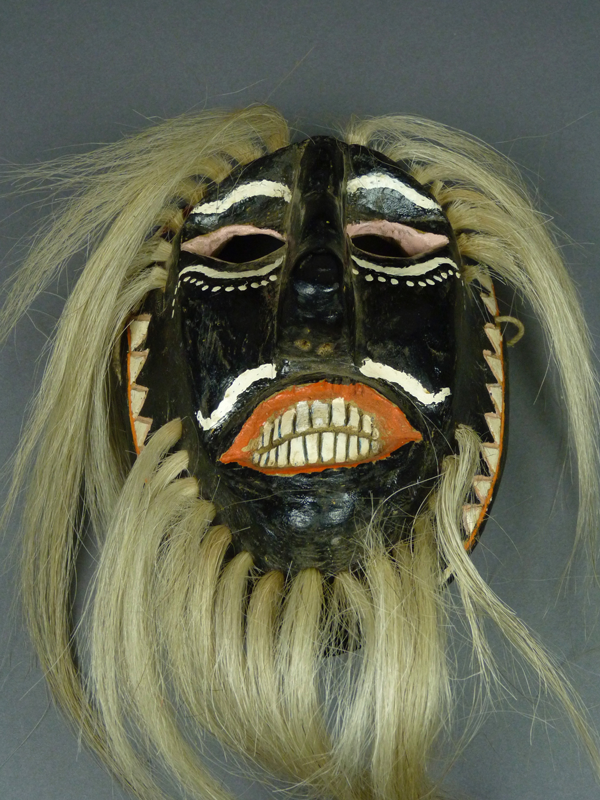 The carefully carved mouth and teeth also closely resemble those of the first mask. 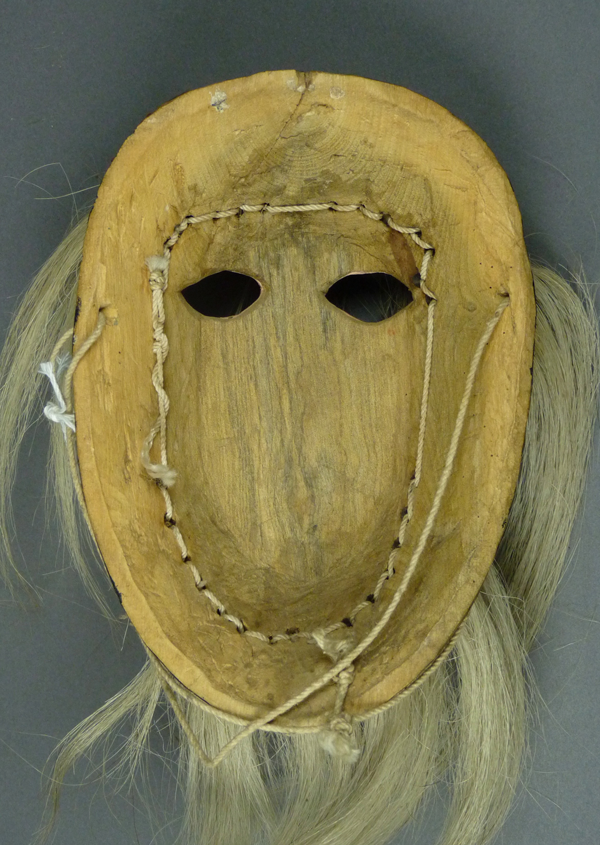 The back of this mask is only mildly stained from use.

The next mask was also photographed in the collection of Barney Burns and Mahina Drees. 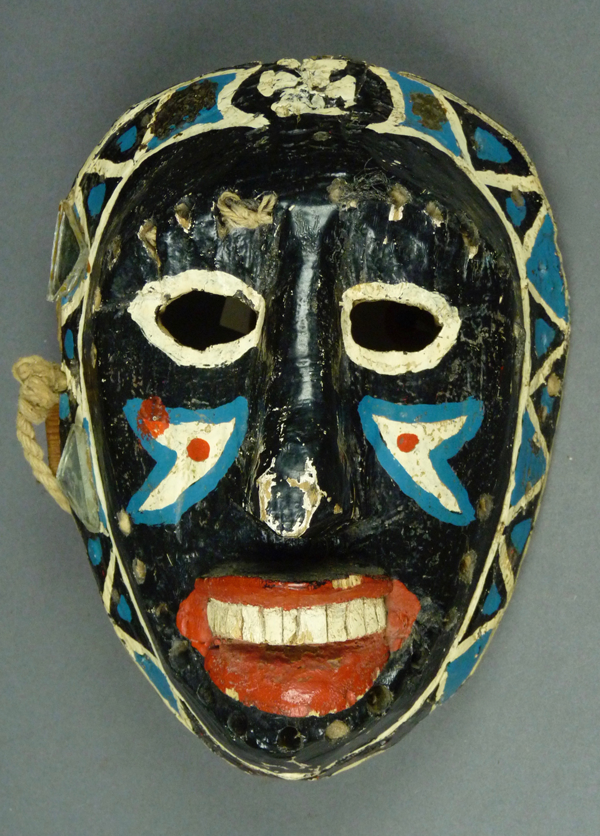 This mask has been repainted, which disguises the maker’s hand, but the shape of the nose tips us off to Candelario as the probable carver. 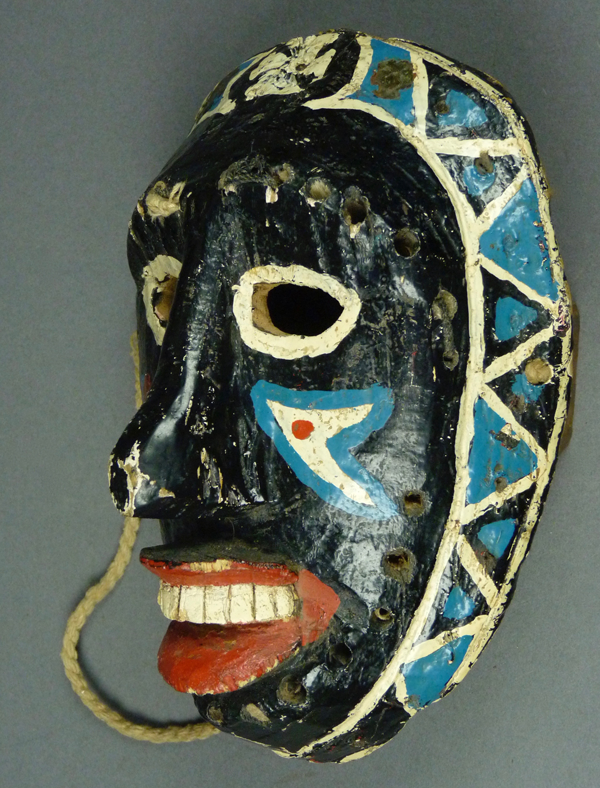 The eyes and mouth are certainly consistent with this attribution. 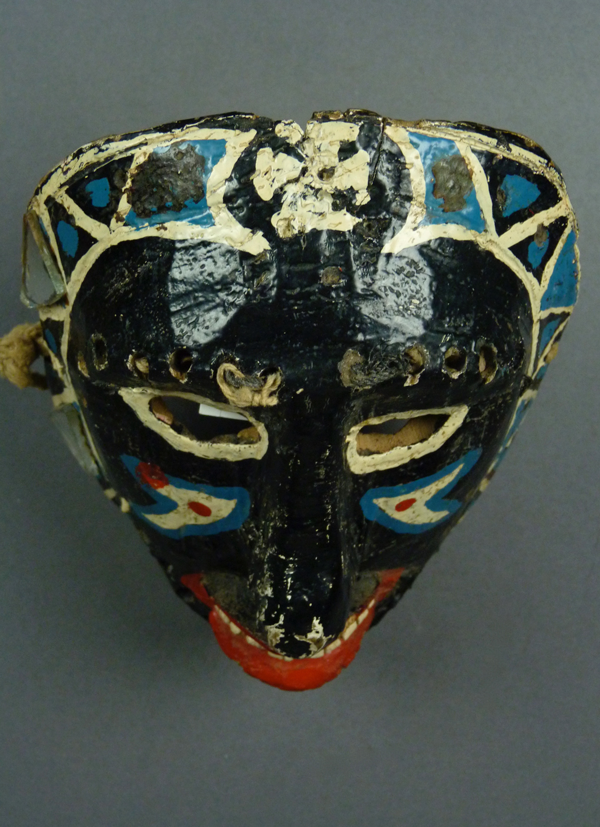 Missing or buried under later paint are the inscribed lines that one often finds on Candelario’s masks. 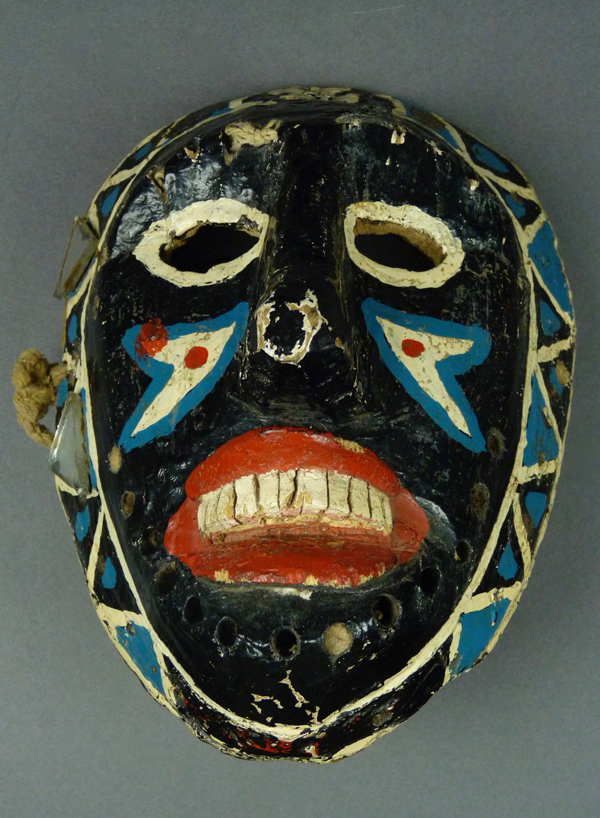 Triangular mirror fragments have been glued to the right side of the rim design. 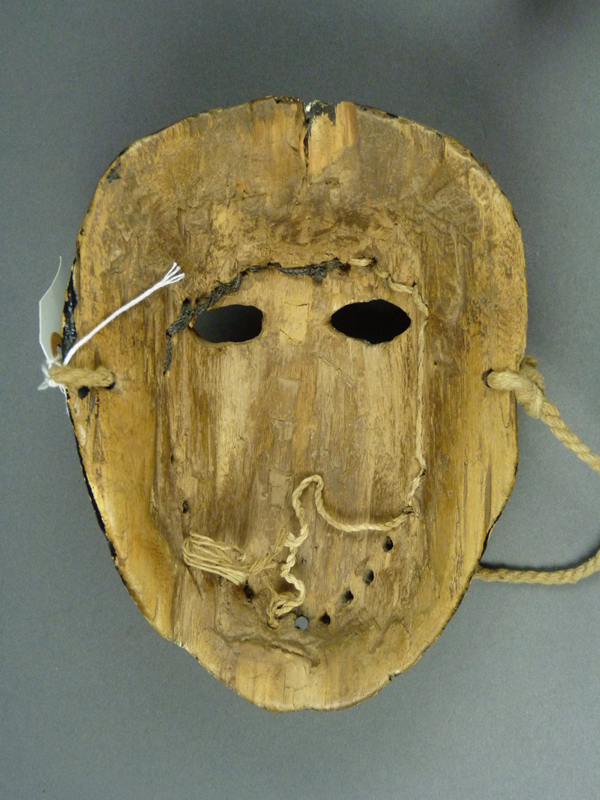 The back is more or less like those on the other masks, but with wear suggesting neglect and exposure to rough weather.

The last of these masks, which was another photographed in the collection of Jerry Collings and subsequently traded to Gallery West, had also lost its tag and came with no provenance. 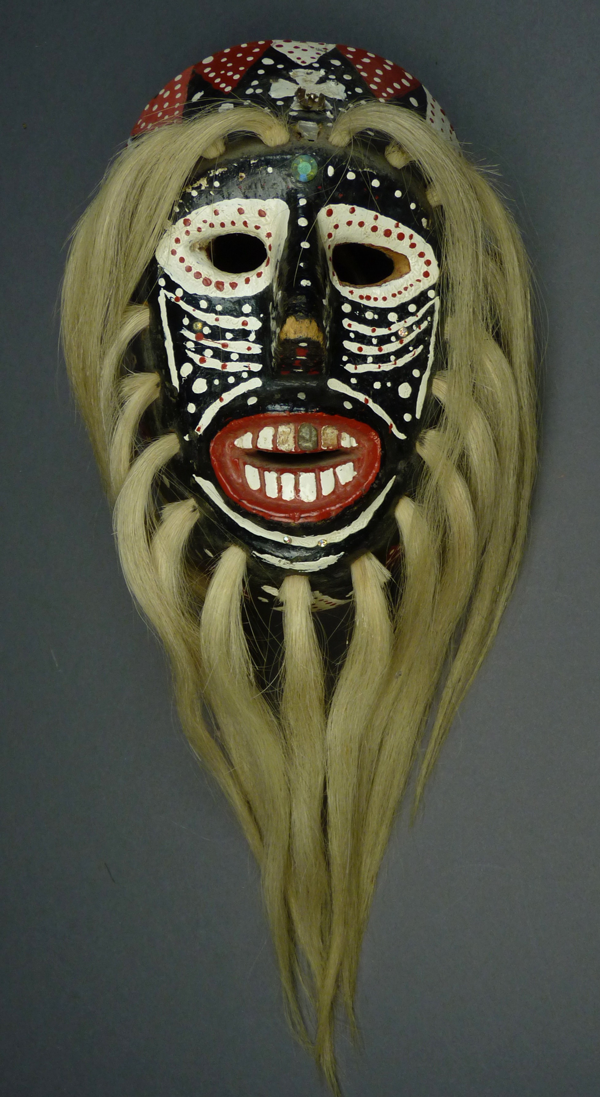 The forehead cross, the eyes, and the mouth all make me think of Candelario, while the nose is different than those in the other four masks. However, the M16 mask in Griffith’s thesis has a nose that is more like this one.

On the other hand, there are certainly plenty of painted dots. 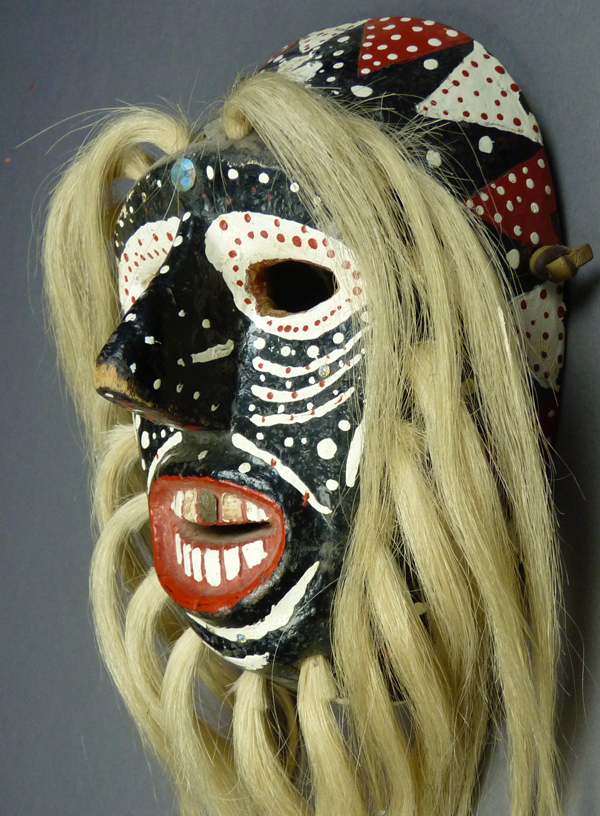 On the forehead there are persistent inlaid elements while others are missing. 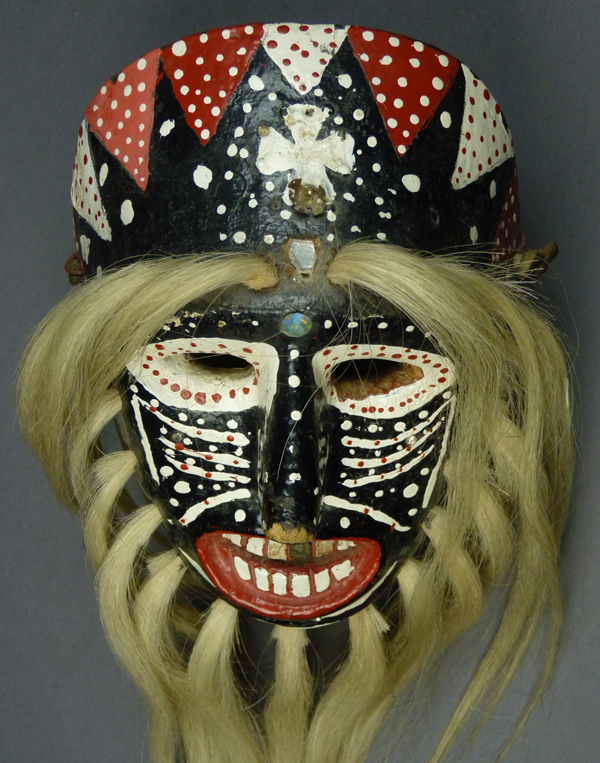 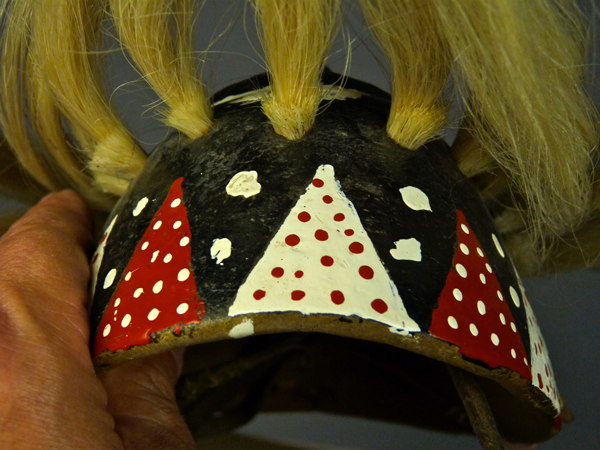 The gaudy rim design was carried right around the chin. As usual for Rio Mayo Pascola masks, this one has no chin cross. 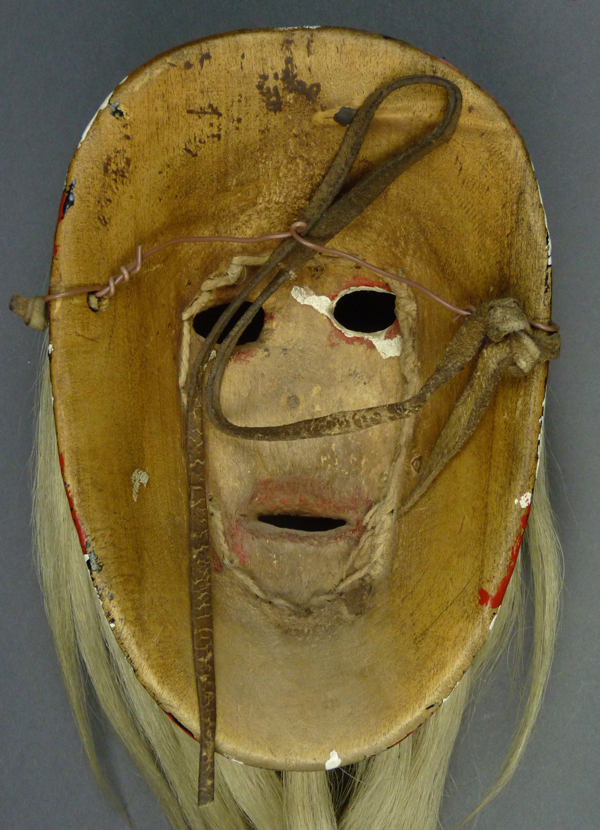 There is a remarkable contrast between the front aspect of the mouth versus the back of this opening. This mask too has marked staining from use.

Next week we will move on to another Rio Mayo carver who was introduced in Griffith’s Masters Thesis, Francisco “Pancho” Parra.