Recently I was privileged to purchase a very rare mask, a Moreno mask used in Southern Tepehuán performances. The Southern Tepehuán Indians live in scattered communities in the Mexican states of Chihuahua, Durango, and Nayarit. This mask was purchased by Edmond Faubert in Nayarit, probably in the early 1980s, and he subsequently sold it to a Tucson Collector in 1984. As it happens, I had photographed it in that collection in the 1990s. It later passed through the hands of several other owners; most recently Tom Kolaz acquired it in a trade and sold it to me.

These Tepehuán Moreno masks are so rare that they have seldom appeared in reference books about Mexican Masks. In Máscaras Mexicanas: Simbolismos Velados, which was the catalogue for a mask exhibit held in Mexico City in 2015 (INAH, ed. Sofía Martínez del Campo Lanz,  page 238), there is a very similar mask, described as a “Moreno” from the Tepehuán del Sur (Southern Tepehuán) culture. It had been used in the Danza de los Morenos in San Francisco de Ocotán, Mezquital, Durango, and was believed to date from the 19th century. Broken, patched together, and worn, it is in the collection of the Comisíon Nacional para el Desarrollo de los Pueblos Indigenas in the Ciudad de México.

I have not learned much about La Danza de los Morenos. “Moreno” means a dark skinned person. Edmond Faubert told Tom Kolaz that he believed these Moreno masks were analagous to the Chapeon masks used by the Tarahumaras in the Matachines dance and that the Tepehuanes had learned this dance from their Tarahumara neighbors. In support of this, I have learned that the Tepehuanes do perform the Matachines dance in Durango. Here is the mask. 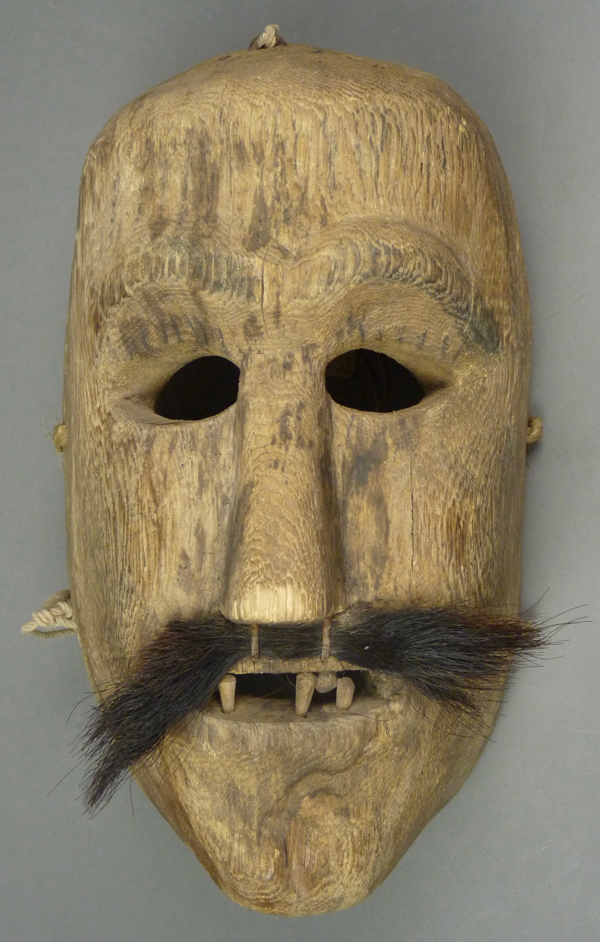 The mustache, held on with metal staples, is probably made with horse tail.

The eyebrows, which are carved in relief, were at one time stained with black pigment, which is now heavily worn. 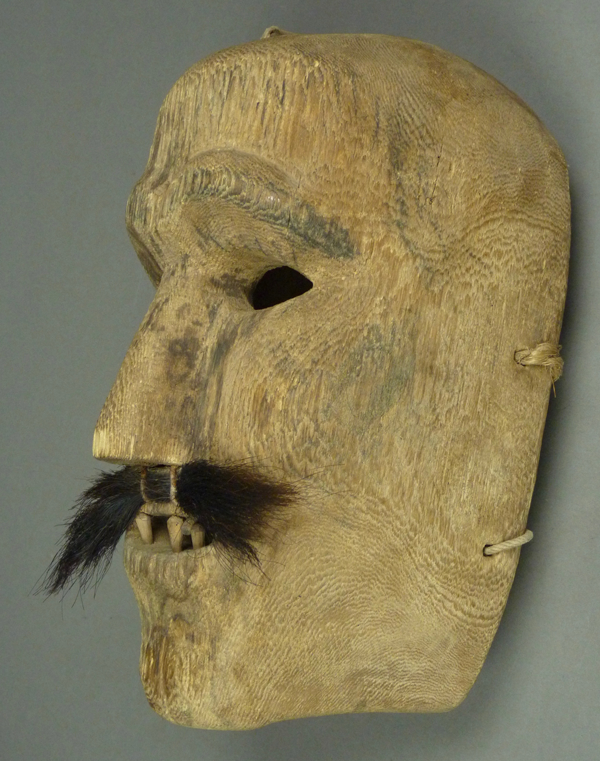 The peg teeth were carefully carved and then mounted in sockets. 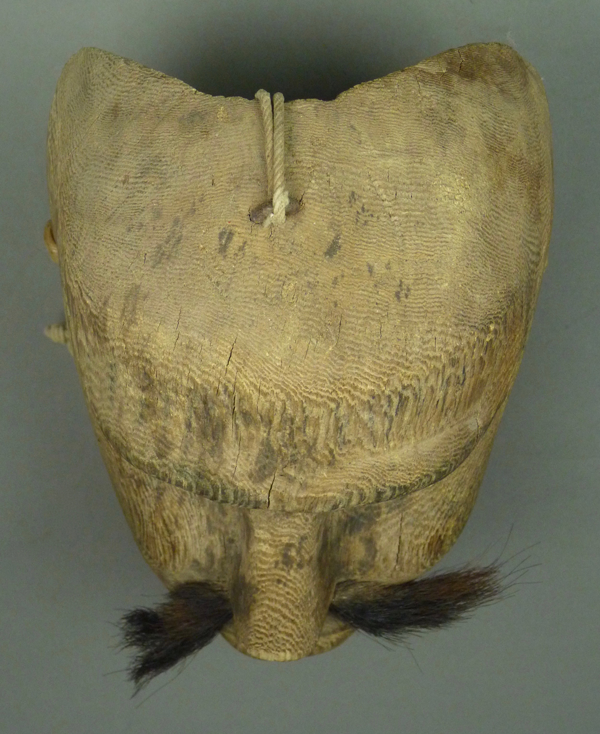 There is an unusual knob shaped chin. 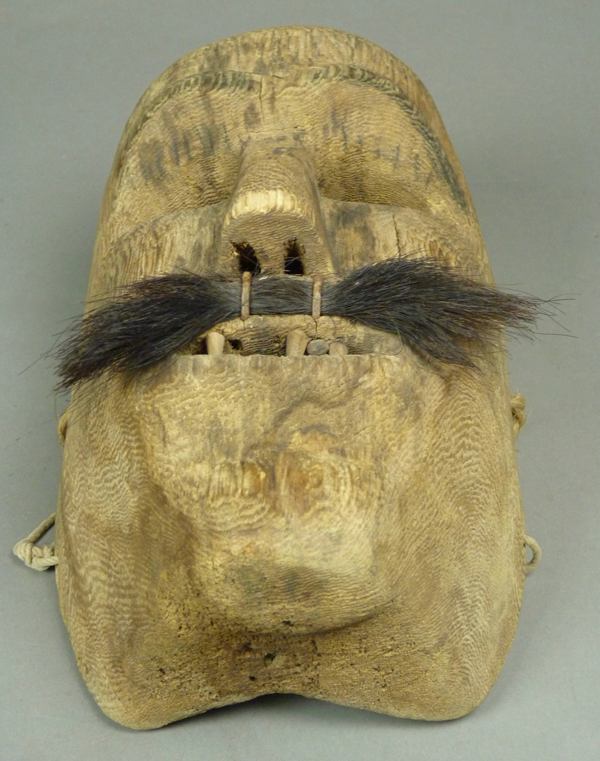 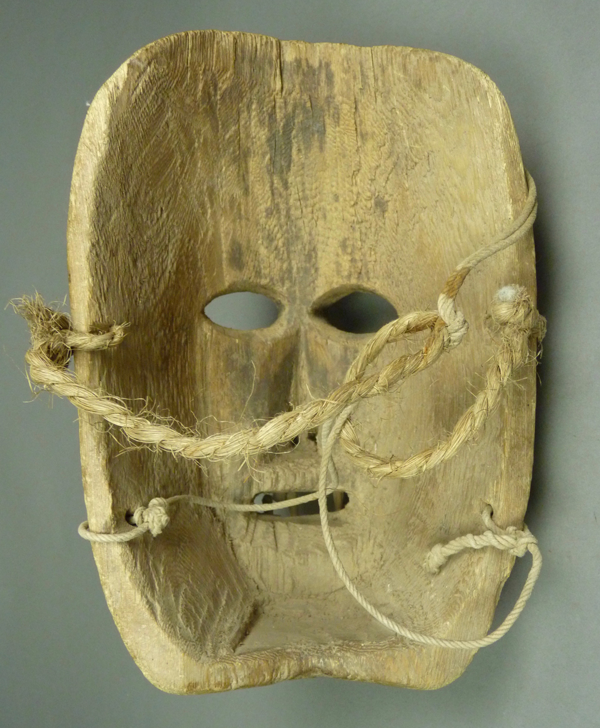 The back has moderate staining from use. 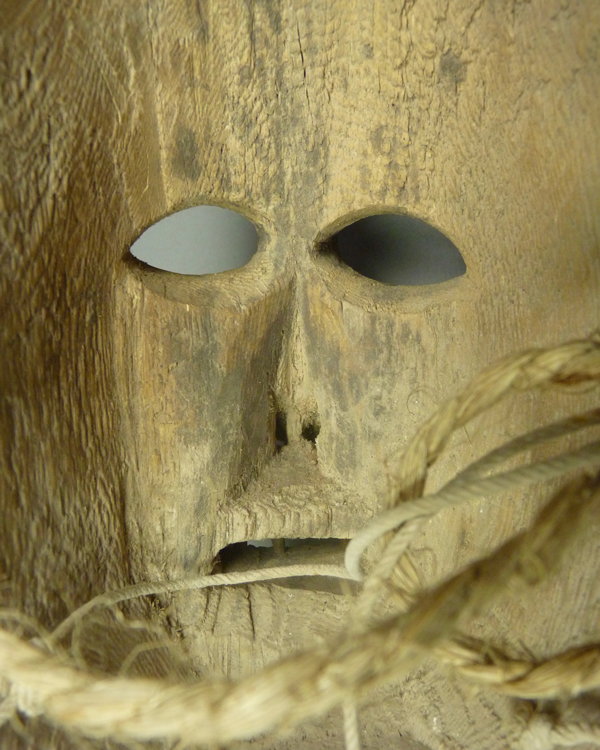 There is a carefully carved hollow to allow space for the dancer’s nose.

Next week we will examine another treasure that was collected long ago by Edmond Faubert, a colorful Mayo Pascola mask.