Last week I showed you an old mask that I recently found on Etsy™. Actually I found two masks there, and today’s post will feature the second from the same dealer. This one is essentially a duplicate of an unusual female mask that I included last year in my post of May 21, 2018. They only differ in their paint or patina, but since they are so old and rare, it gives me great pleasure to look at them side by side.

And here, to refresh your memory, are the three masks featured in that post, all from the Danza de los Negros in towns within or near the Municipio of Chichiquila, Puebla. This dance. “Los Negros,” is a local variation of La Danza de los Santiagueros, itself an offshoot of the Moros y Cristianos Dance that was imported from Spain by the Conquistadors. As I have explained at length in my book—Masks and Puppets: Master Carvers of the Sierra de Puebla—the Santiagueros Dance is fascinating because it pretends to depict conflict between Christians and the Pilatos, the enemies of Christ, when it seems to covertly function as a prayer for the “true Christians (the Indians of the Americas) to defeat the Spanish conquerors, who are accused of being false Christians. Such a hidden script is usually hinted at by some inconsistency, and we will find such evidence in this Negros dance.

The first mask was worn by Santiago or a Santiaguero. 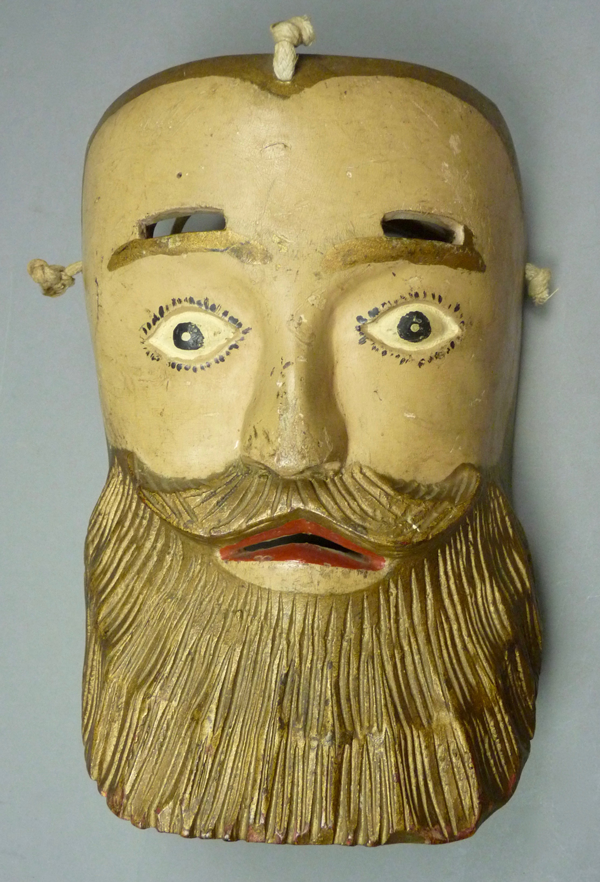 I am including the back views of all these masks to remind you that the backs are nearly identical to one another in design. This suggests that all four of today’s masks were carved by the same carver. 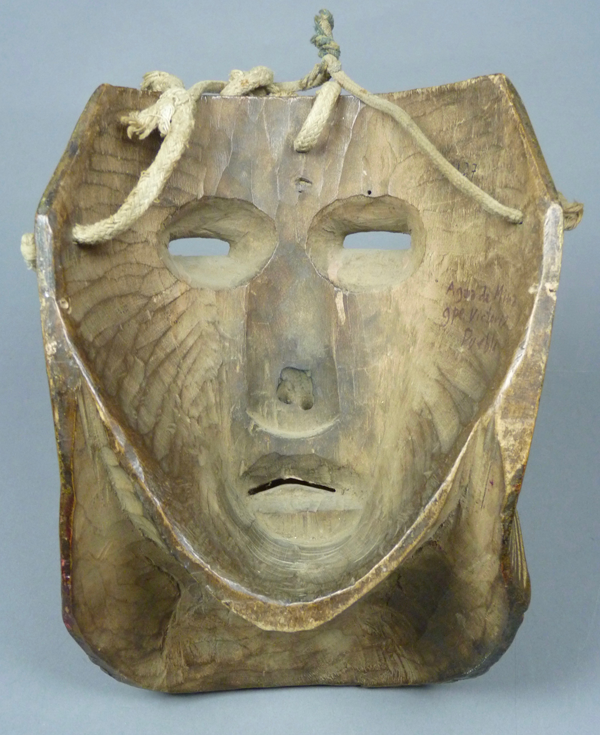 This back is obviously old and worn.

The second mask, a “Negro,” (or Pilato) is named for the color of the mask’s hair. 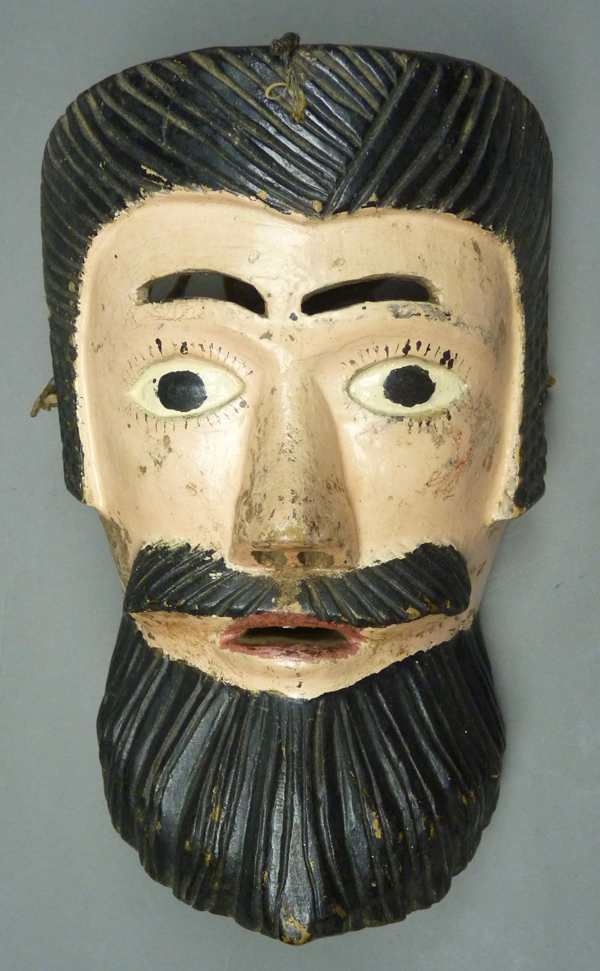 The Santiaguero and the Negro masks have the same hollow beards too. 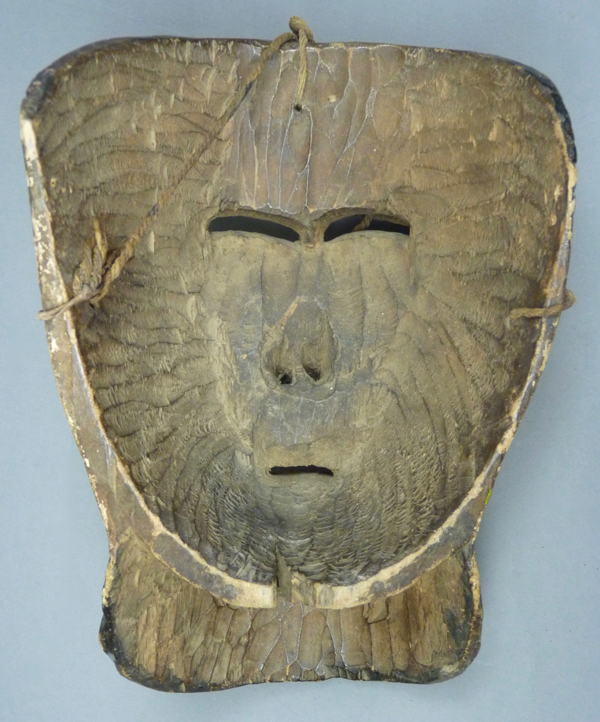 This second back is equally stained from use.

The third mask was worn by a mysterious figure in the dance—Maria Catalina. Historically Maria Catalina was a heroic local figure, one of many Mexicans who revolted against the Spanish, who captured and imprisoned her, but when the Spanish were ejected from Mexico she regained her freedom. From the perspective of the Revolution, Maria was a positive figure. In Mexican dances, heroic figures are usually represented by masks with attractive features.

But here we see a woman with less than attractive features. Do these connote fear, or is she is being ridiculed or denigrated? What is going on? This seems paradoxical, an inconsistency. The possible explanation is that Maria was or is still perceived by the Indians, who are after all the dancers, as “one of them,”a colleague of the Spanish-American rulers (the group that the Pilatos covertly represent) who remained after the Revolution to continue to exploit and abuse the Indians. An unattractive face might mark her, from an Indian perspective, as one of those exploiters. 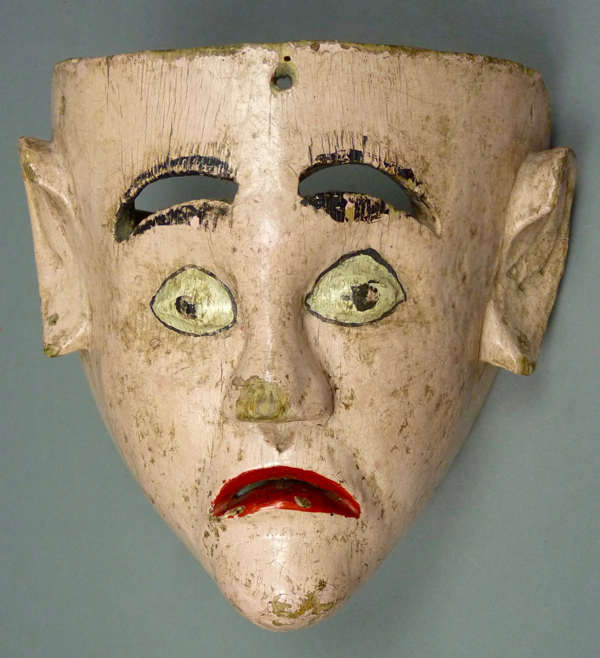 Maria’s oversized ears are the big tip-off to her status or standing. 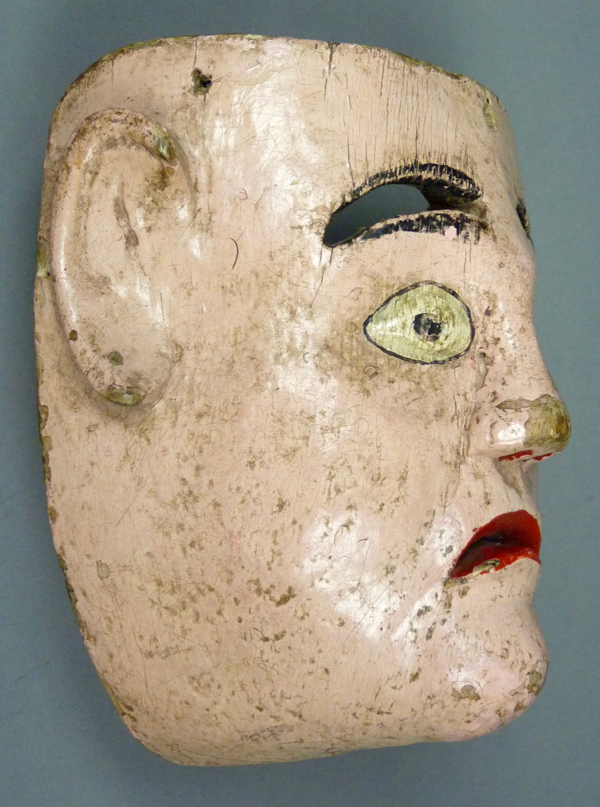 Her eyes don’t do anything for her looks either. 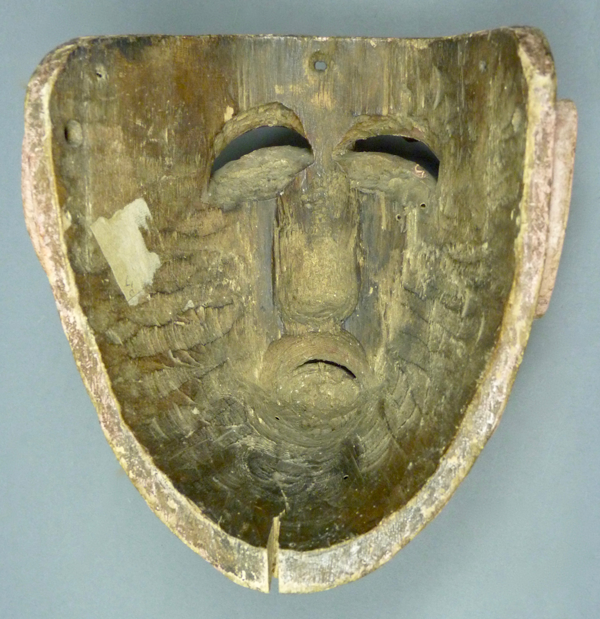 This is another old and worn mask.

Here is a YouTube™ video of this dance. The video opens with María Catalina and Santiago dancing at the heads of two lines:

Note that Santiago, who is wearing a cowboy hat, a red shirt, and knee length black leather boots, is the only armed dancer. He grips a sheathed machete with a horse’s head handle in his left hand and wears a pistol in a holster on his right waist, for an unusually modern touch. These weapons are particularly apparent in the opening scenes and again at 2 minutes, 40 seconds. Such bone-handled machetes are popular in the Mexican state of Oaxaca.

With these images for comparison, here is the recently arrived duplicate of the Maria Catalina mask that I bought from an Etsy seller. The old tag says (correctly) “Negros Character, Los Negros Dance, Chichiquila, Puebla.” 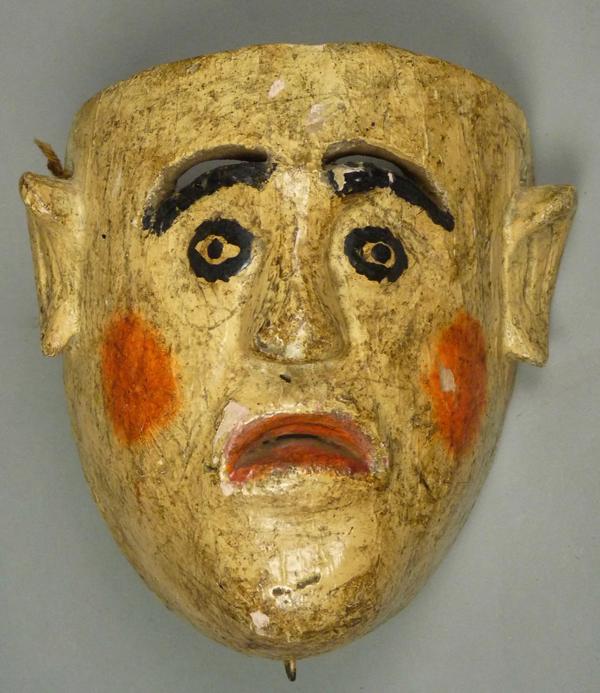 Except for the paint, this mask is nearly identical to the other Maria Catalina mask.

This mask is 8 inches tall, 7 inches wide, and 3¼ inches deep, slightly taller than the other one. 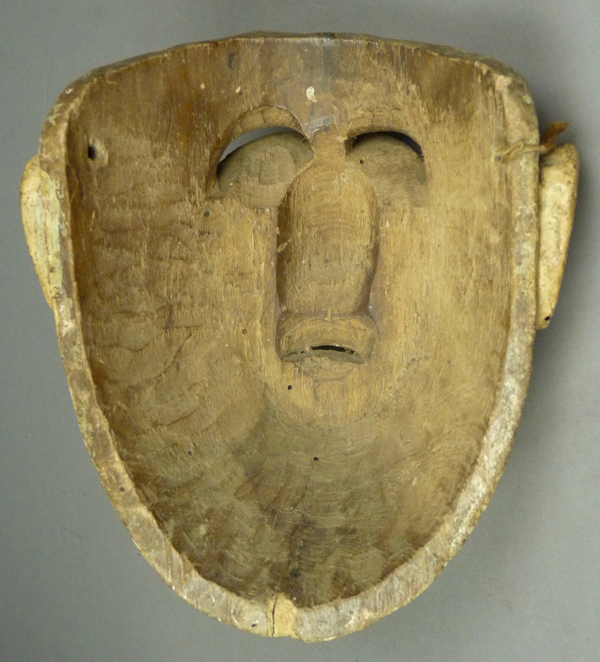 The similarities in the faces and  backs of the two María masks are obvious. 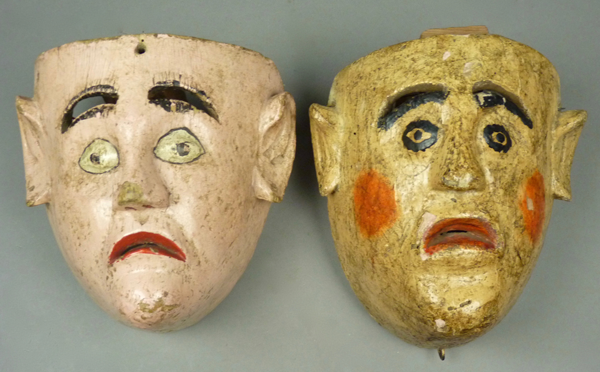 I was surprised to find that they looked so much alike. 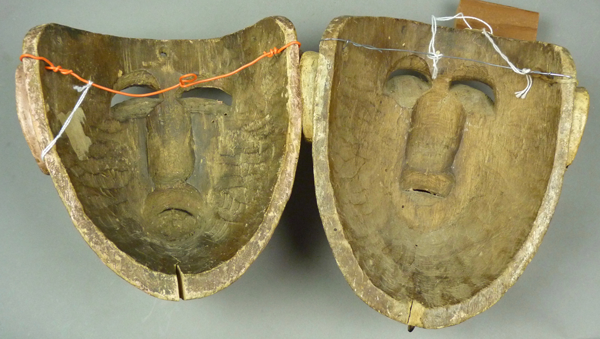 Next week I will show you a very rare mask, a Moreno mask used in Southern Tepehuán performances.