Last week I showed four Calavera (skull) masks from the Mexican State of Guerrero that I had intended to post about four years earlier, but I forgot. This week I am examining five Xantolo or Carnaval masks from Hidalgo and Veracruz that appear to have skull faces. Once again I meant to include them in a related series of posts, but forgot. At least I have a good excuse this time, having put up 17 posts about various styles of Xantolo (13) and related  Juanegro (4) masks in the period from September 21, 2015 to January 11, 2016.

As was the case with last week’s foursome, these skull masks are anything but forgettable. The first is from Tolima, Veracruz. I bought it from René Bustamante in 2006. He called it Doña Muerte (Madam Death) and said it had been danced in Carnaval (Carnival/ Mardi Gras). 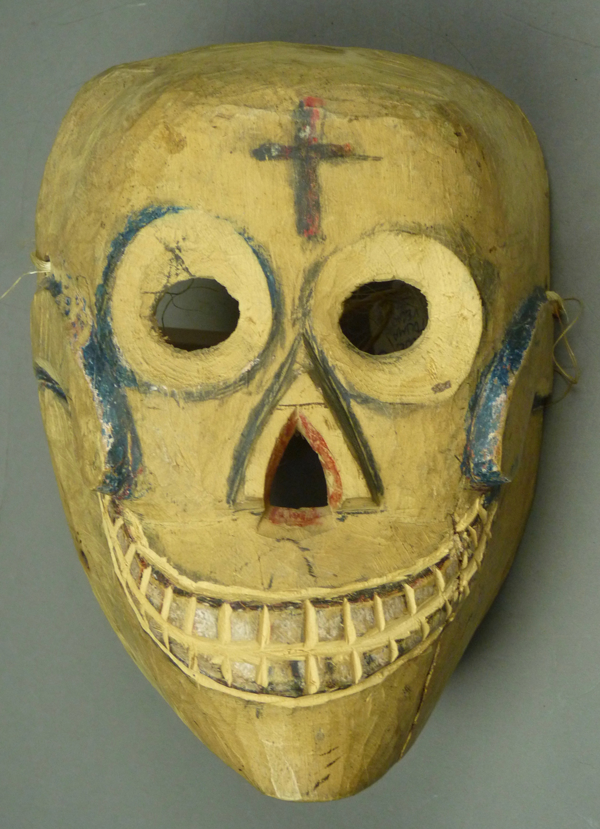 A cross on a mask like this may have been applied as a message to God, to the effect that the wearer is a Christian, although he is portraying an essentially malevolent underworld figure. 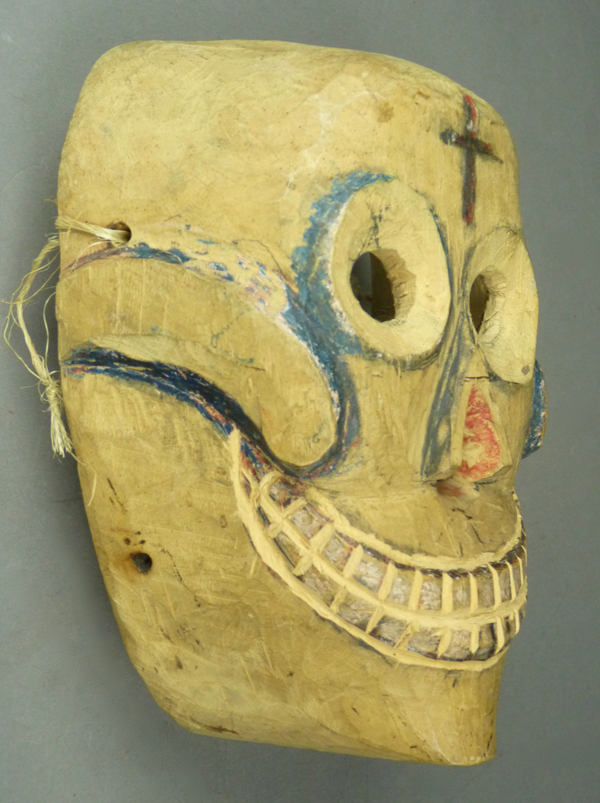 The face of the mask has good patina from use. 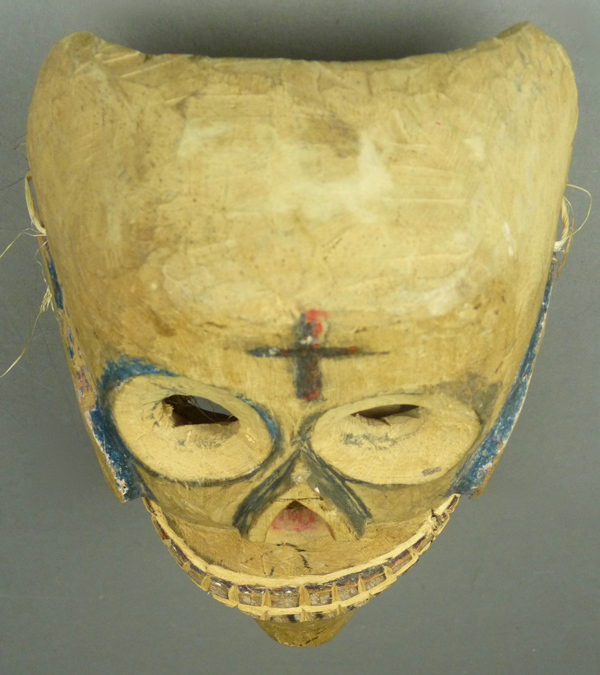 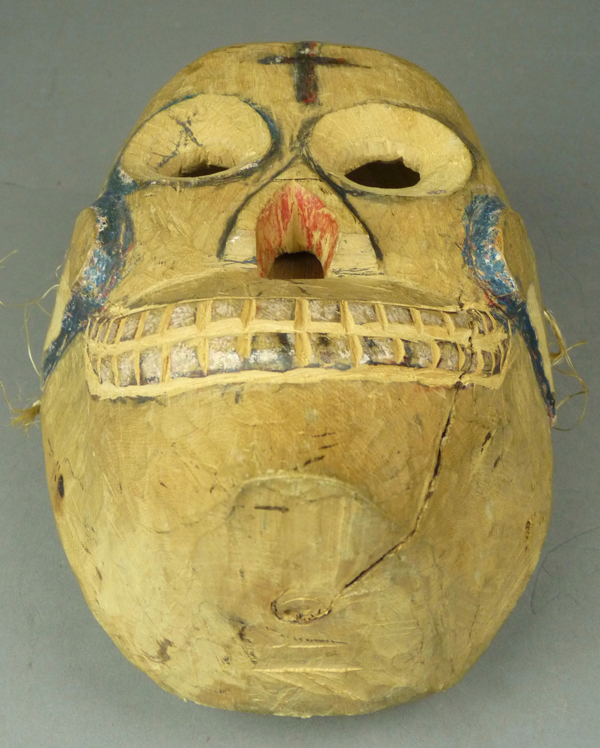 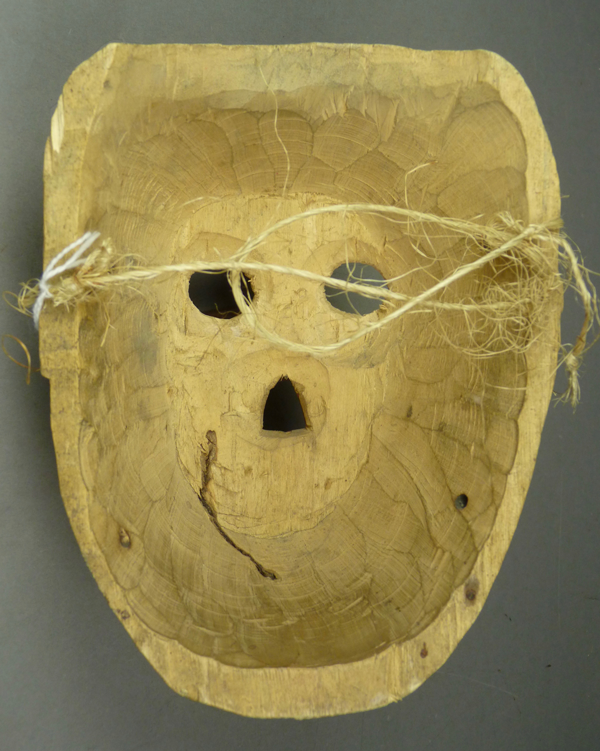 The back is moderately stained from use.

I bought the followng mask and the next from Jaled Muyaes and Estela Ogazón in 1997. Both were said to have been used in the Xantolos (Chantolos) Dance, in the Mexican State of Hidalgo. 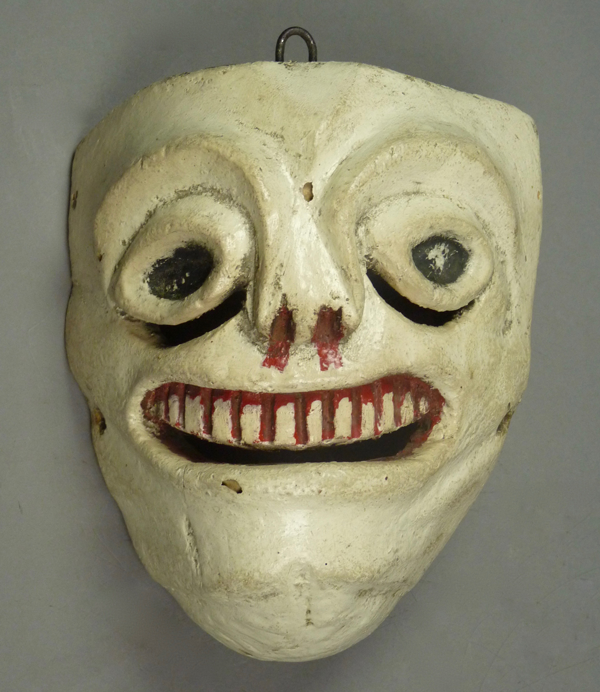 I associate the use of a metal staple in place of a forehead hole for the strap to be  attached as a trait from the Huasteca region- Hidalgo and Veracruz. 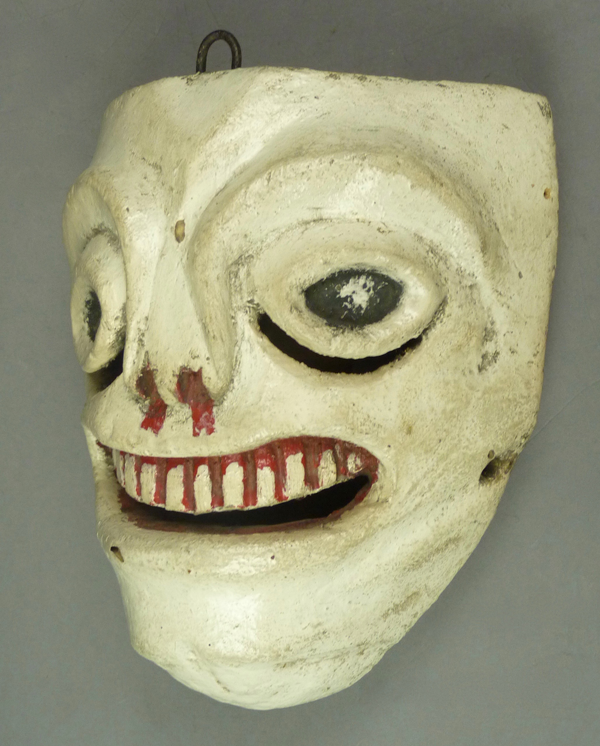 There is all this blood to suggest malevolence. 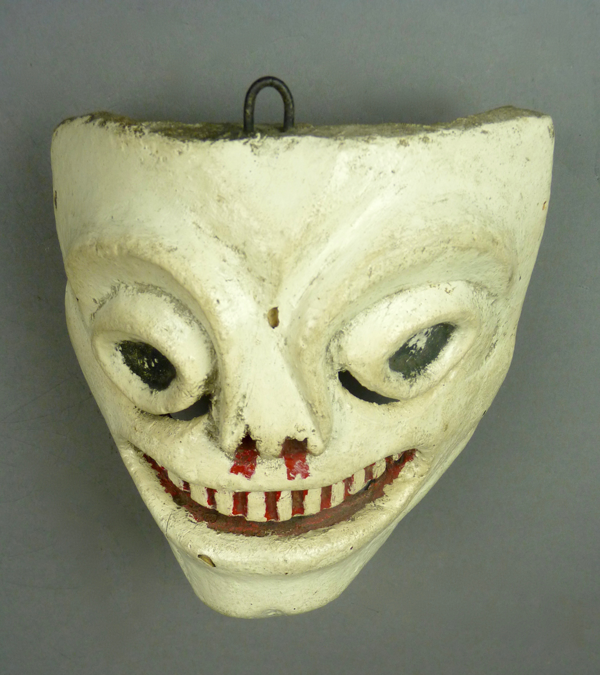 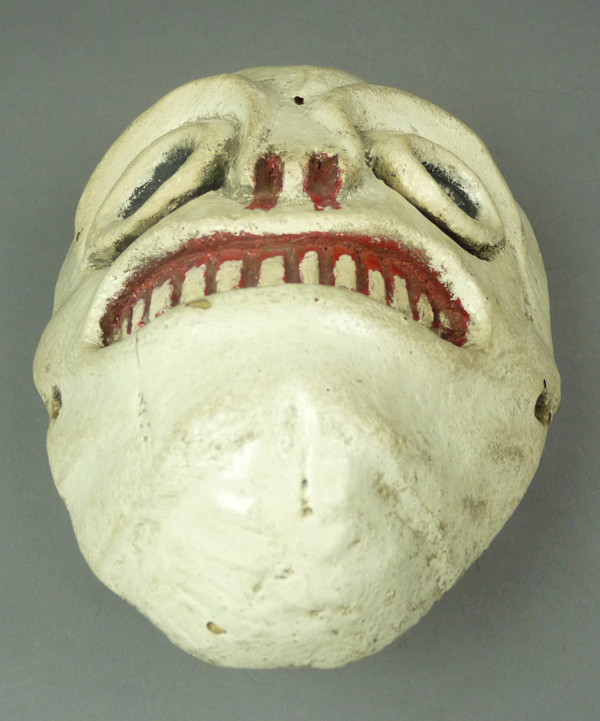 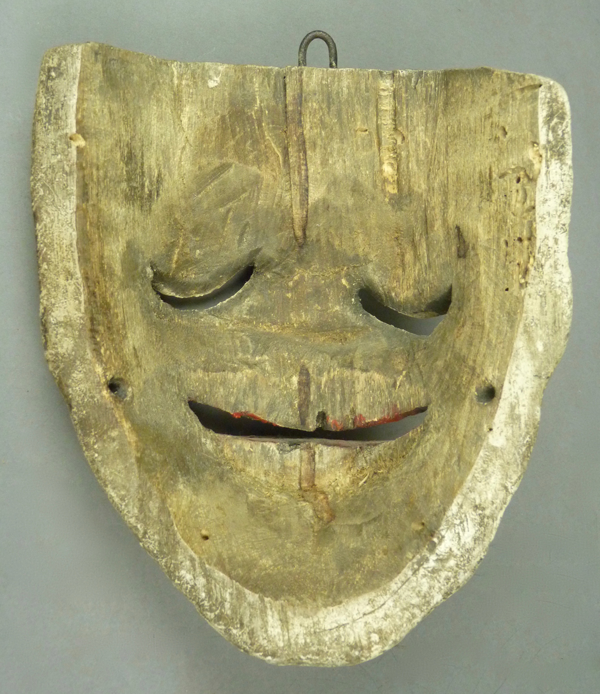 The back of this mask has marked staining from use.

This next mask, from Papalotla, Municipio of Calnali, Hidalgo was also used in the Danza de los Xantolos. 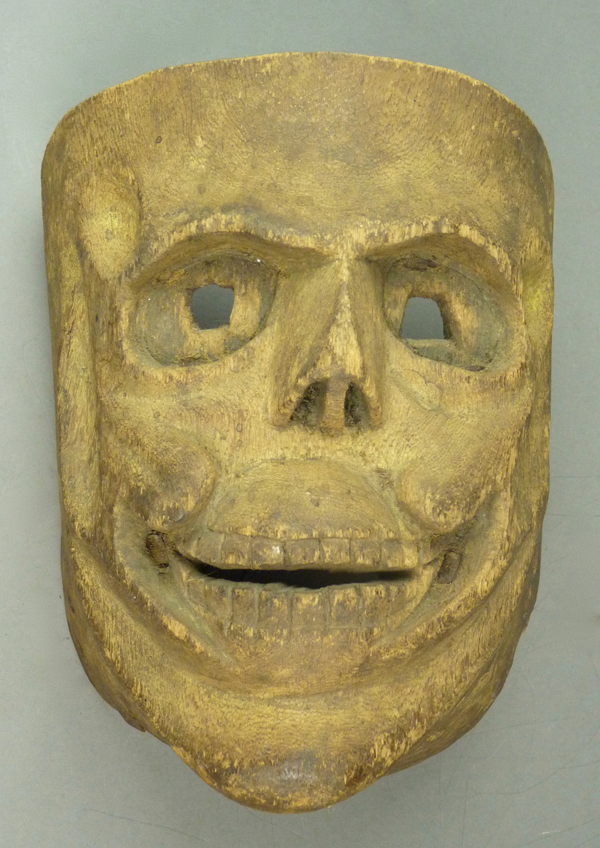 There are old insect casings at the corners of the mouth, which I only noticed after taking this photo. I plan to remove them. 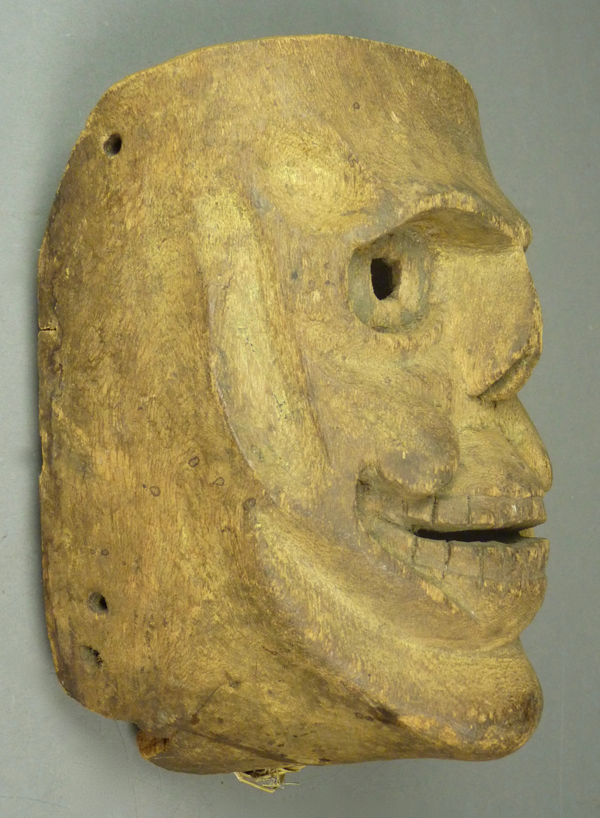 This is a remarkable skull mask. 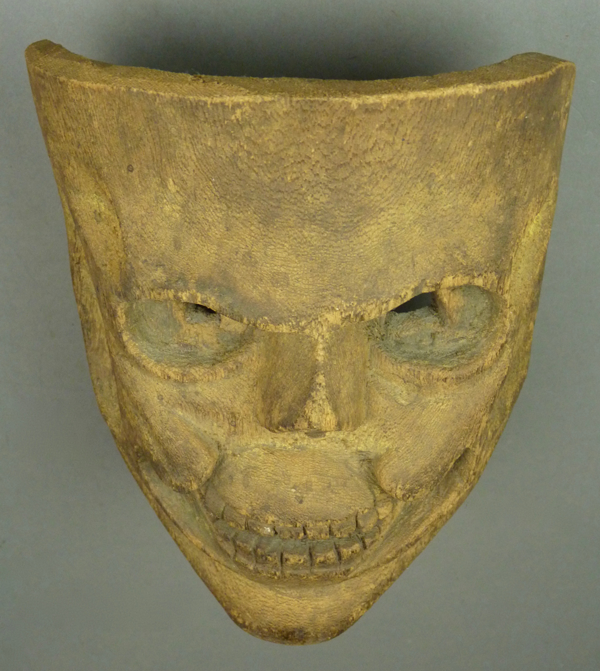 There is an old repair at the chin. 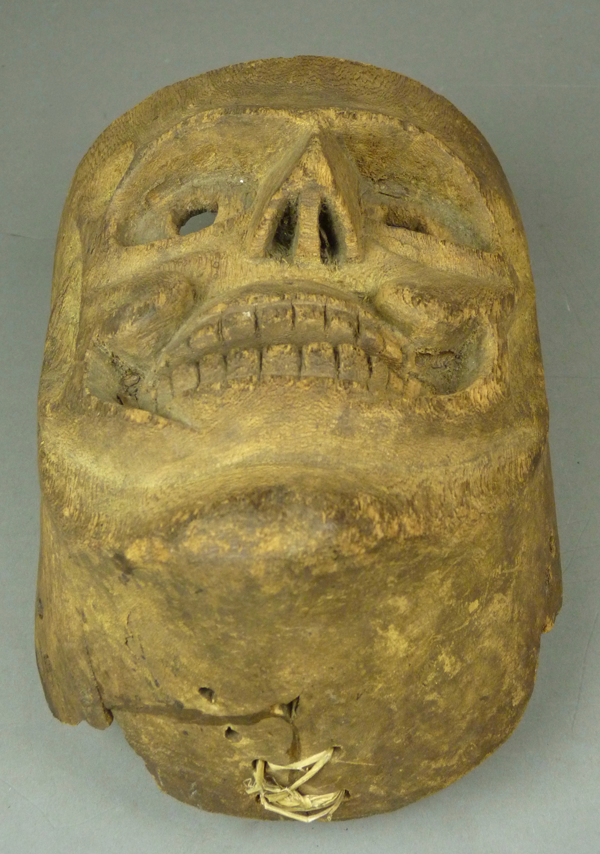 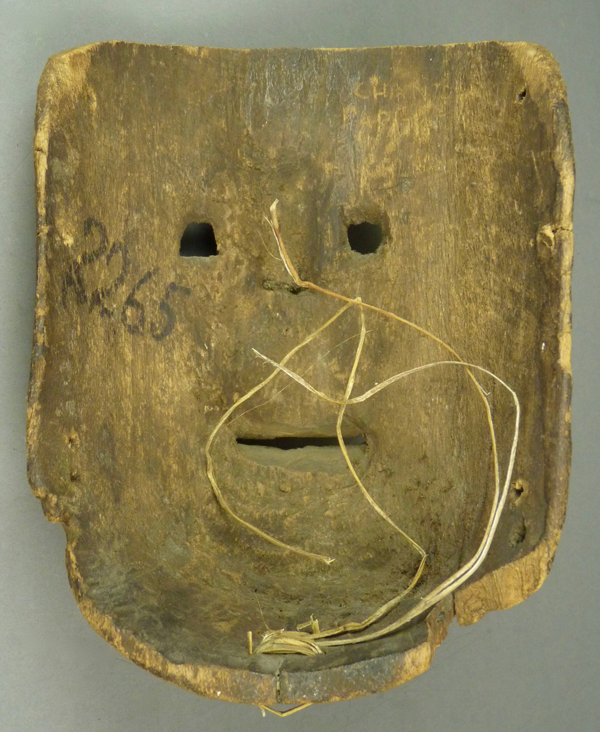 The number 2265 indicates that this mask was included in the 1991 Mexican Mask show in Mexico City, which was drawn from the collection of Jaled Muyaes and Estela Ogazón. Scratched on the back, over the right eye,  is the place of collection- “Chantolo. Papalotla, Hgo.

I bought this next mask from Dinah Gaston in 2002. It came without provenance. I believe it is from the Huasteca but it could be from Guerrero. 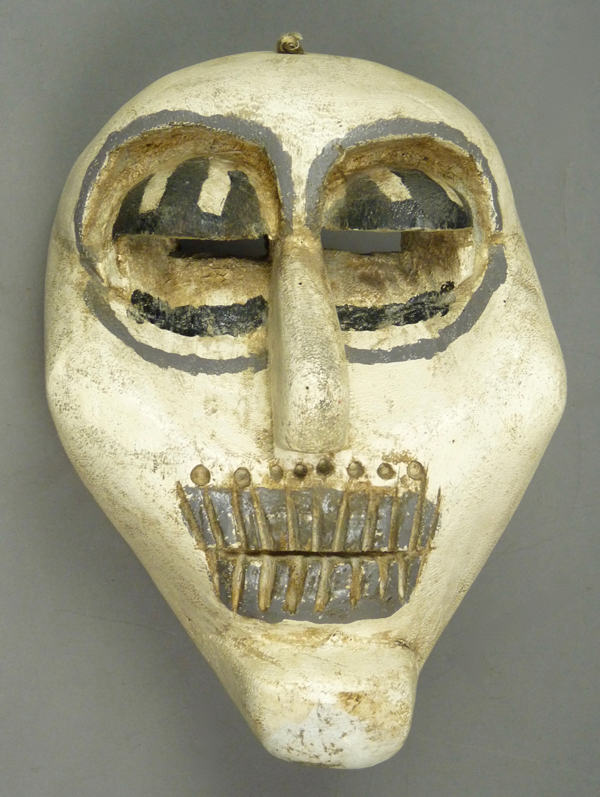 This mask is remarkable because it is such an abstract representation of a skull. Such masks are highly unusual, 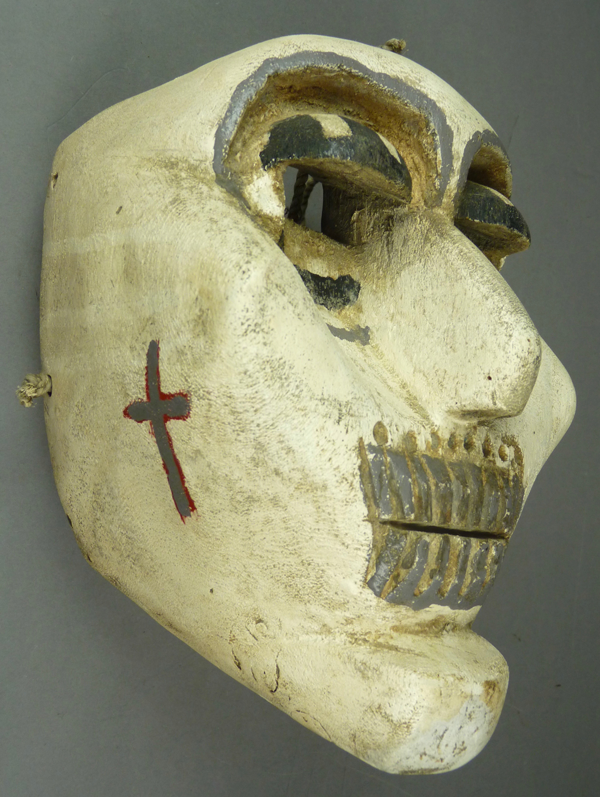 It has exaggerated painted eyelashes, and crosses on the cheeks. 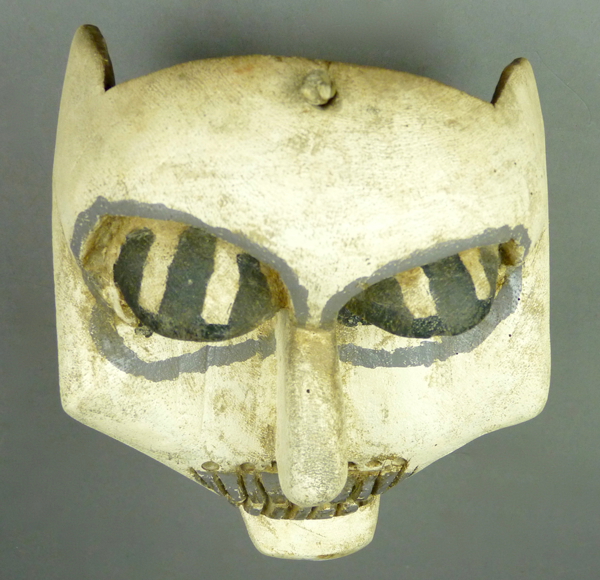 There are prominent cheekbones. 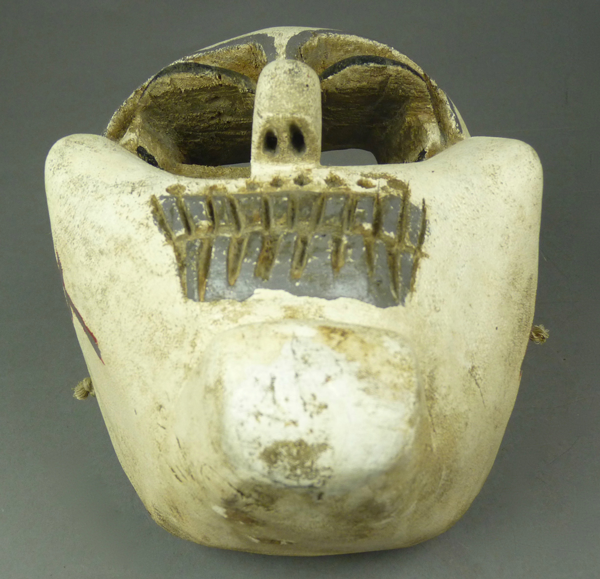 Look how the chin has been polished by the dancer’s hand. 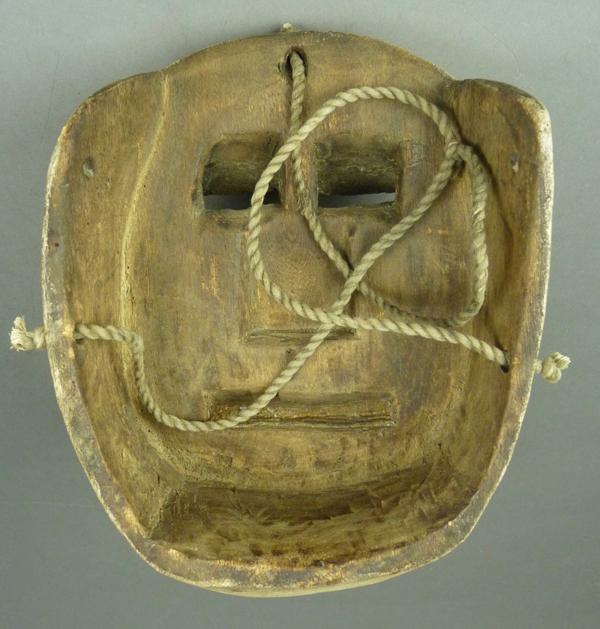 The back is darkly stained from use.

I purchased the last of these masks from René Bustamante in 1993. It was said to be from the El Nante region of Hidalgo. 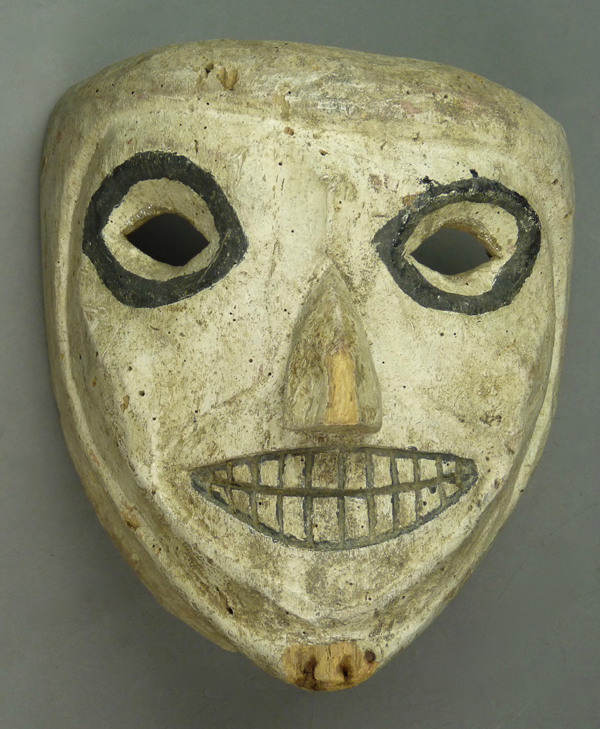 René’s tag refers to it as a “Xantolo/ el Muerte?” I agree with that tag; this is a most unusual mask.

Looking at this photo and the next, note the rim around the face, as if the skin of the face has an outer and an inner layer. On an earlier post (see link ), I described a style of Xantolo mask that had such layers, and I referred to this style as an imitation of the appearance of an Aztec deity- Xipe Totec, who is also called “the flayed god.” But in those examples, the outer layer has openings that frame the skin of the eyes and mouth of a face behind the outer mask of human skin. In the present example, the outer layer frames the entire face. But also one could call this a Xantolo mask that has been provided with black rims around the eyes, as if to suggest that it was later meant to  represent a skull. 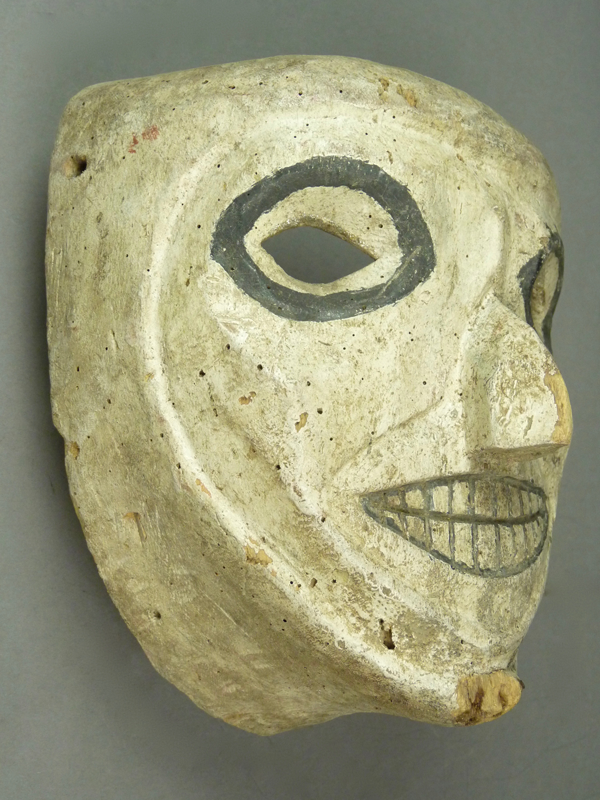 The chin has been chipped. 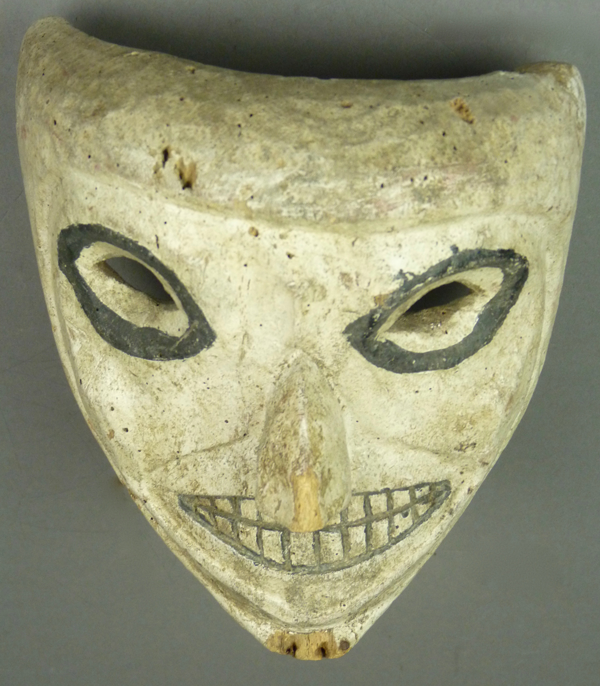 Probably a tuft of hair was once nailed to the chin to represent a beard. 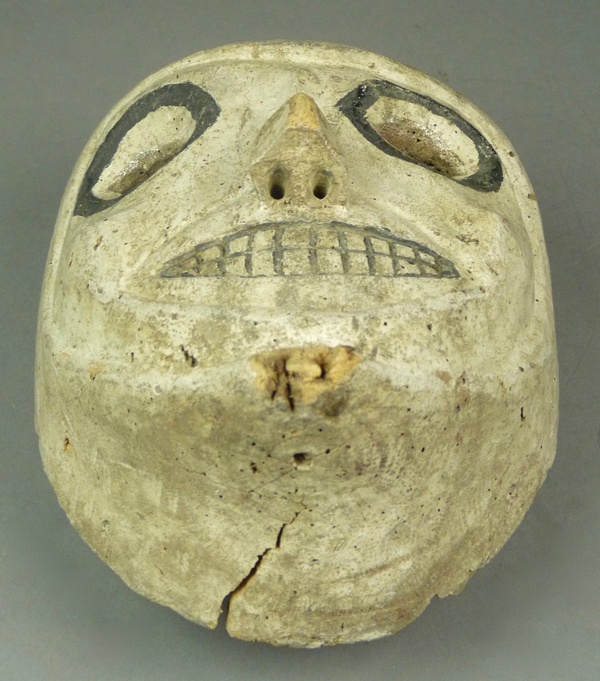 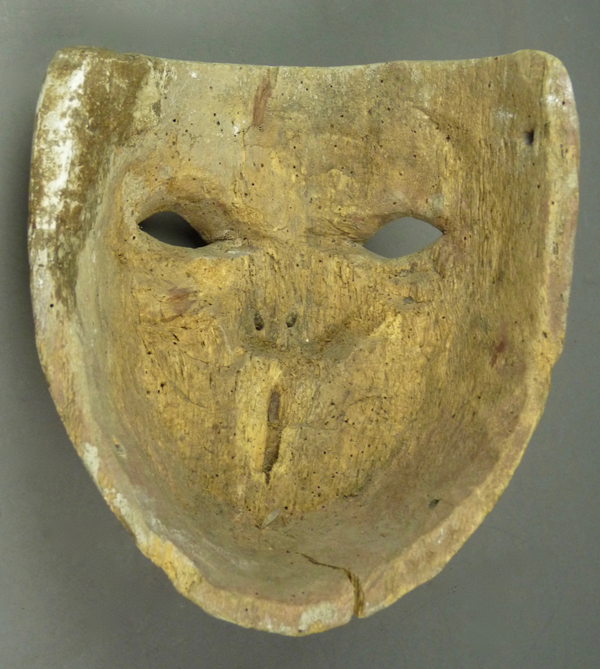 The back of this mask has moderate staining from use.

Next week I have yet another omitted skull mask to show you, from the state of Mexico.