Today I have the pleasure of showing you a series of Yaqui Pascola masks that were carved by Daniel Moreno of Hermosillo, Sonora.  I will show three that were either purchased directly from the carver or confirmed by him, and these will demonstrate his typical stylistic features.  However, they certainly do not demonstrate unformity of design. Drawing on this variety of features, we will examine two more that I have attributed to Danial on the basis of their similarities to the other three. As you will see, this carver’s most characteristic feature is a very large nose.

This mask and the next were collected from Danial Moreno in January 1981, in Hermosillo (Sonora), by someone who wishes to remain anonymous. They have subsequently passed through various collections. I am grateful to David West, the owner of Gallery West in Tucson, for allowing me to take and publish these photos. This one had reportedly been danced for 23 years.

Isn’t this a dramatic mask!

The cross on the top of this mask is off center, making the entire mask look lopsided. The tip of the nose is scuffed from use. 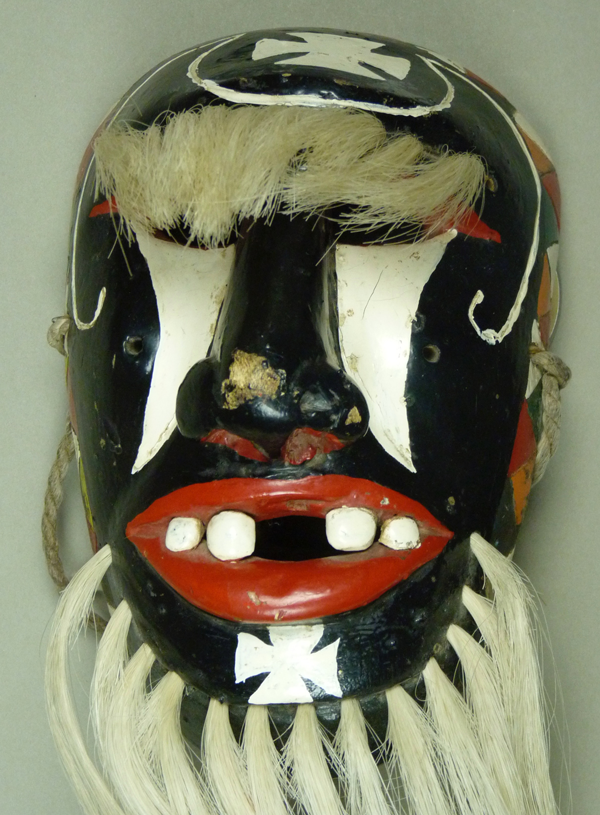 The oversized lips are carefully carved and painted. The large nose is also shapely. 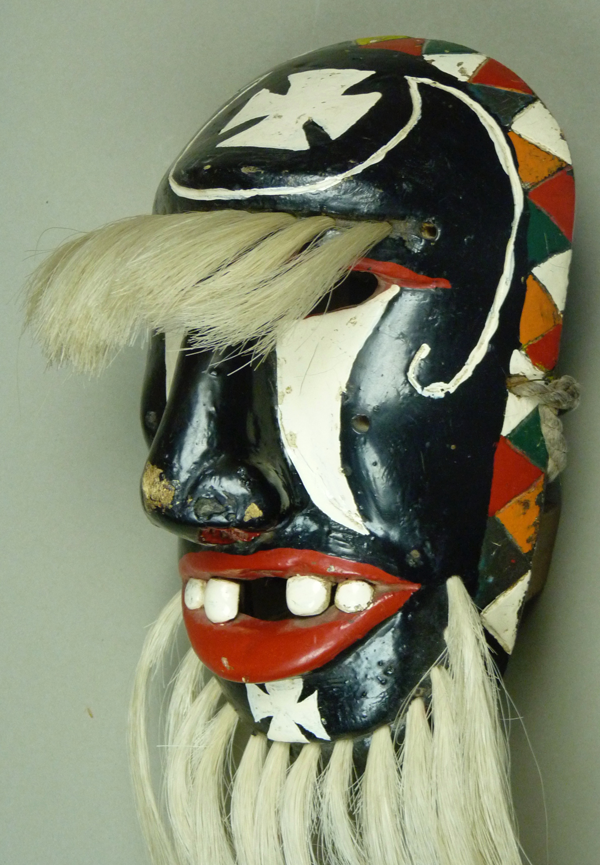 The rim design is quite colorful. There is a chin cross, which resembles the one on the forehead. 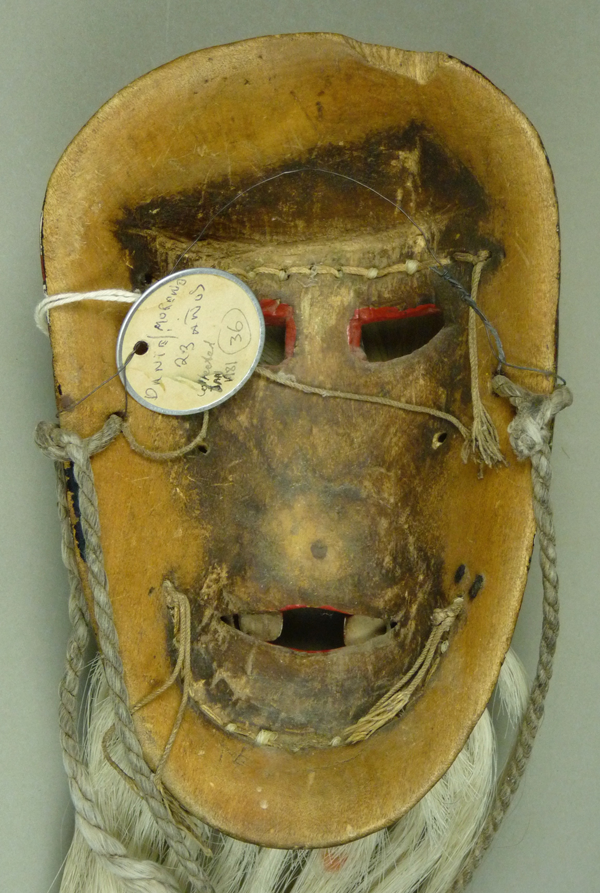 After having been danced for 23 years, the wear is obvious.

The next mask, which certainly appears to be newer, does not come to us with an estimated date of carving.

There are incised curving lines on the forehead, a feature that was also present on the first mask. 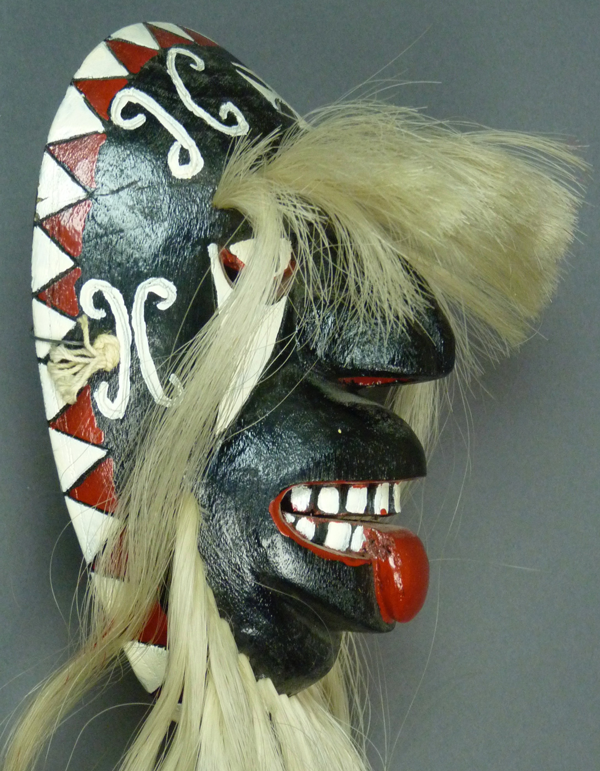 The nose is large. The mouth is dramatically snouted. There is a Maltese cross on the forehead. 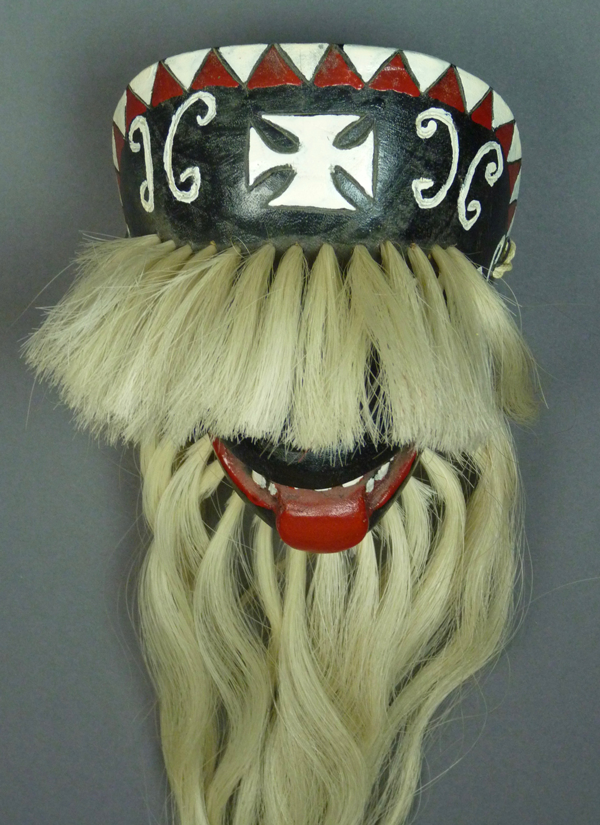 There is no chin cross. 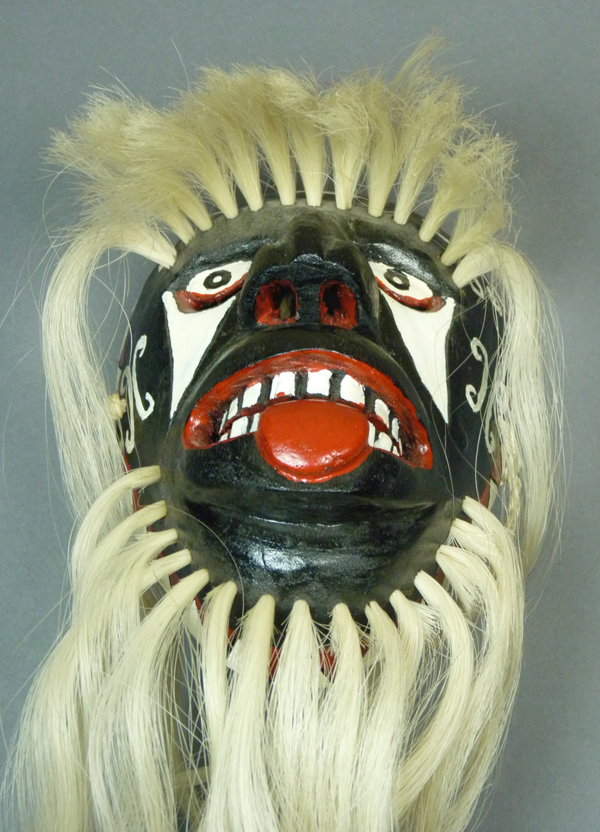 The vision slits are crescent shaped and these are under the eyes. 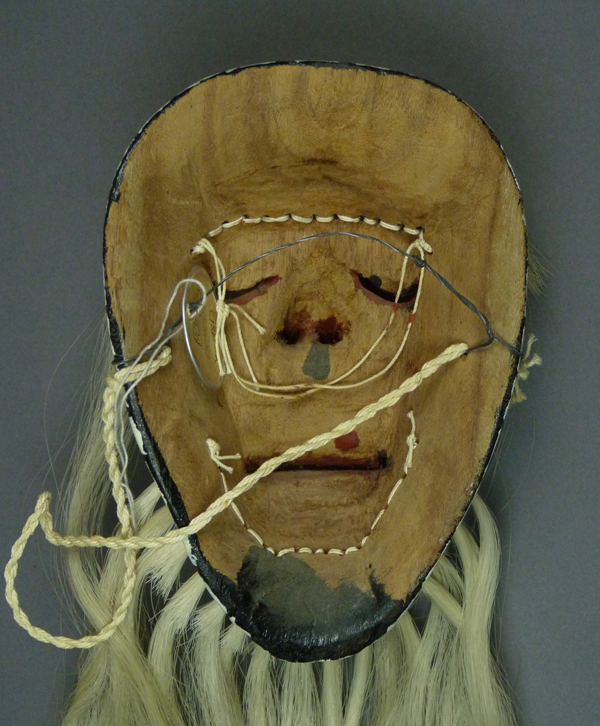 There is some staining from use, but much less than on most of the other masks in today’s post.

The third of these masks was purchased from Ramiro Torres, who reported that it had been carved by Daniel Moreno in about 1950. Following this lead, the collector sought out Danial and purchased the other two masks. Apparently Daniel confirmed then that he had made this one. It is a very unusual mask, because the vision openings are located within the white triangles under the eyes.

There are small Christian crosses on the forehead and chin which may have been added later. 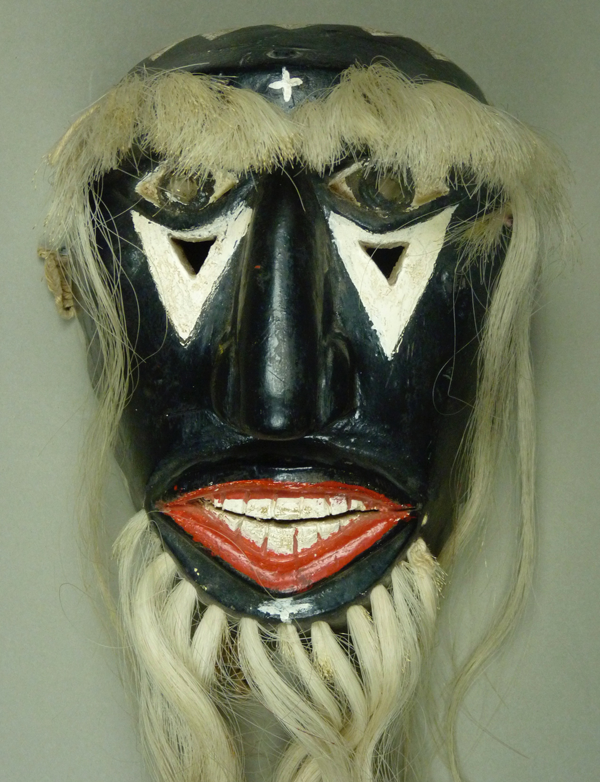 There is inlaid glass to represent the pupils. 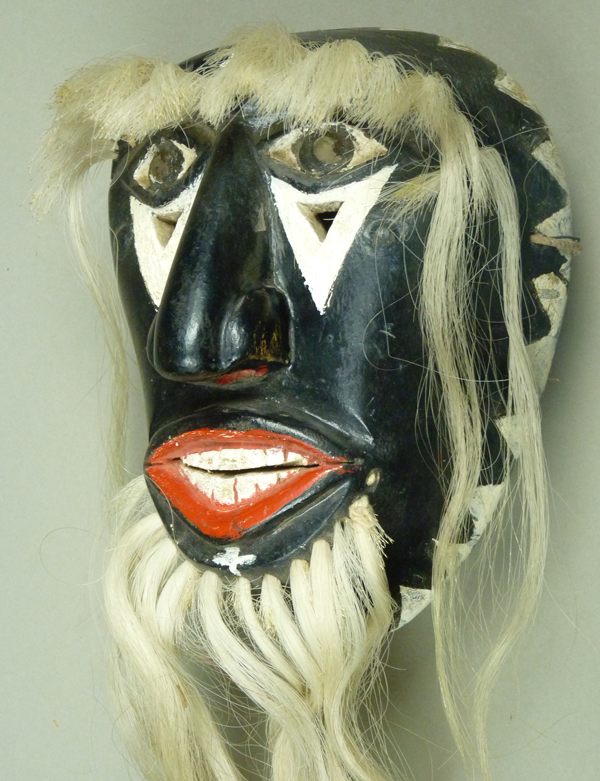 The mouth is snouted. 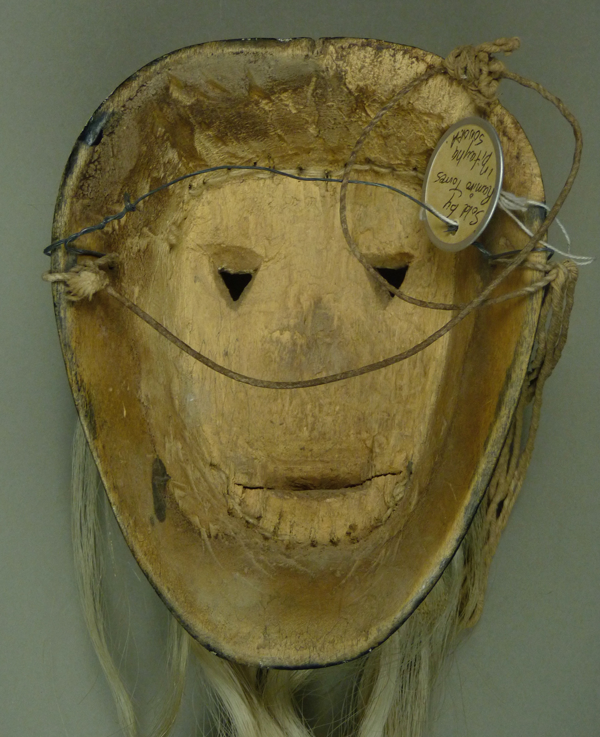 There is marked staining around the inside of the rim.

I discovered this next mask in the Caskey-Lees collection. At that time there was no identified carver, and I was pleased to discover yet another mask that appeared to be by Daniel Moreno. I am grateful to Liz Lees for these photos and for her permission to publish them. 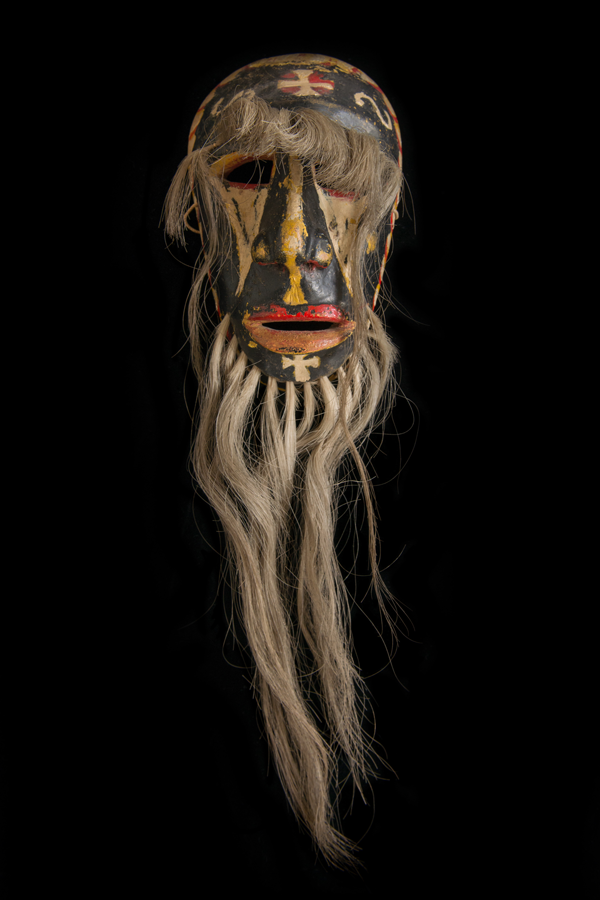 Characteristics that link this mask to Daniel Moreno include the long and tapered shape, the design of the forehead, and of course the oversized nose. Also the mouth resembles that on the first mask. 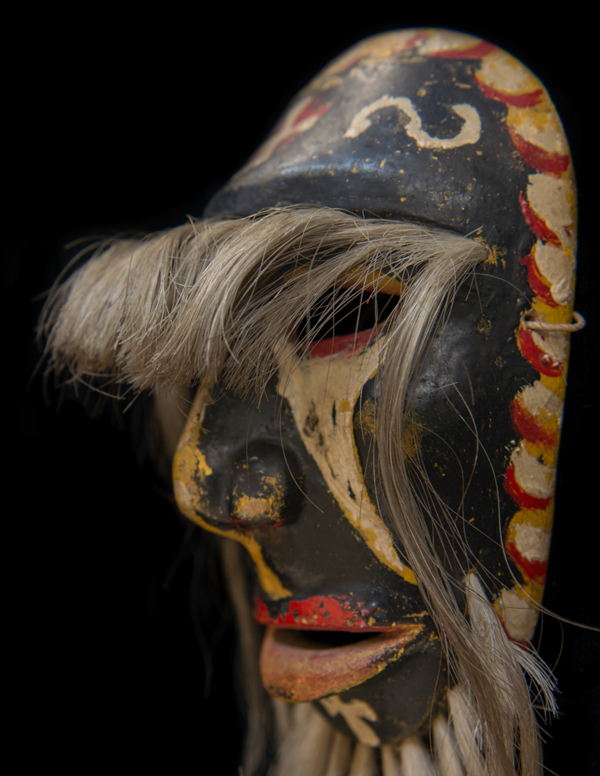 The eyes, the white triangles under the eyes, and the crosses are also consistent with Daniel’s style. 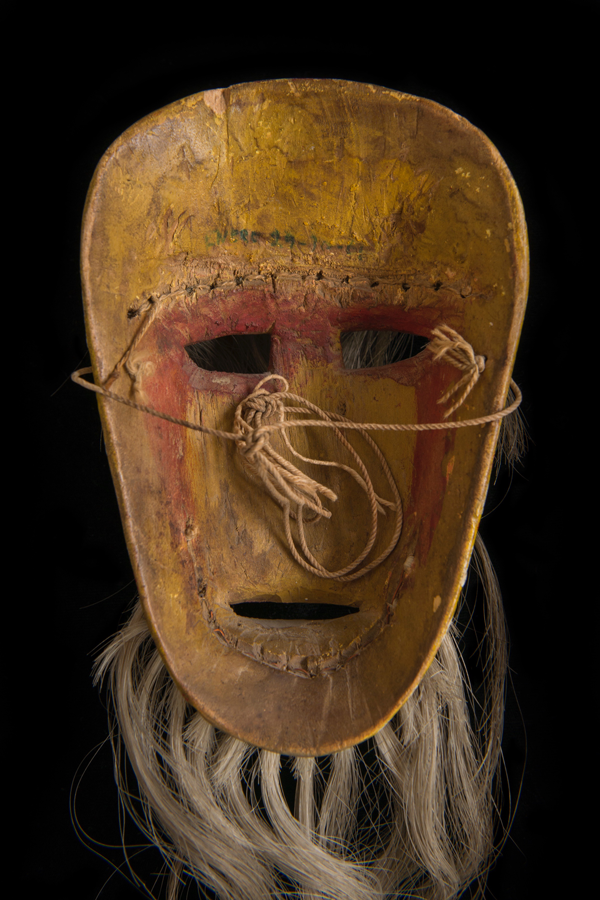 This is another mask that has a very worn back.

The last mask is one that I had purchased from Robin and Barbara Cleaver in 1989. It came with no information, the original paint was long gone, and the back was heavily stained. The magnificent oversized nose immediately reminded a friend of masks by Daniel Moreno.

The shape of the brow most resembles that of the Caskey-Lees mask. 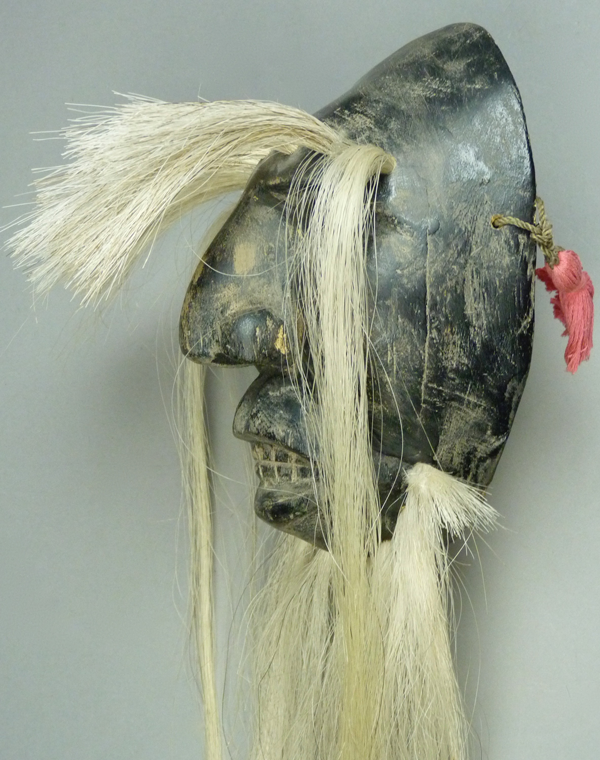 This mask has been scraped and then repainted. Currently there is no sign of any crosses. 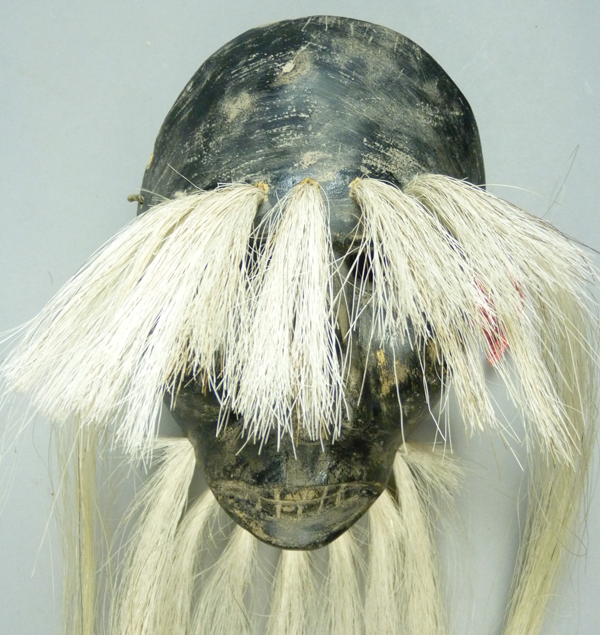 The mouth and teeth have some resemblance to those on some of the other masks. 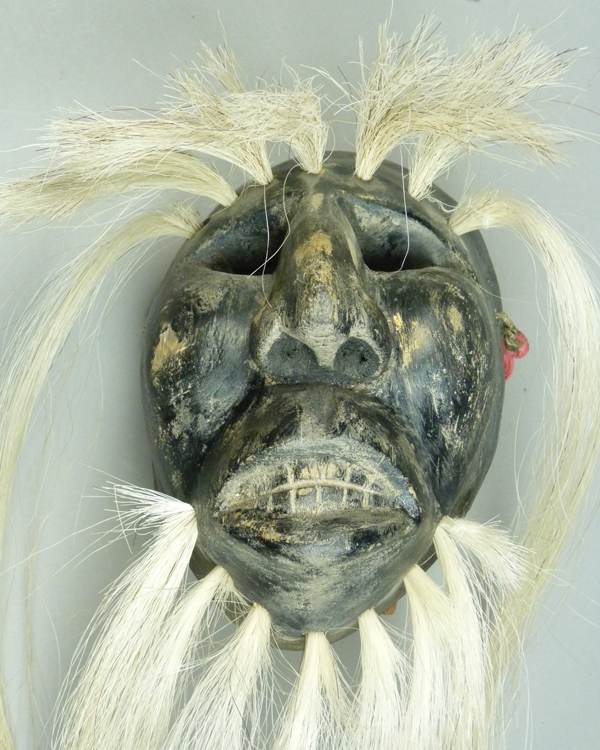 The nostrils have small holes in their bases, but there are no corresponding holes on the interior surface of the mask. This mask is 7¾ inches tall, 5 inches wide, and 4 inches deep. 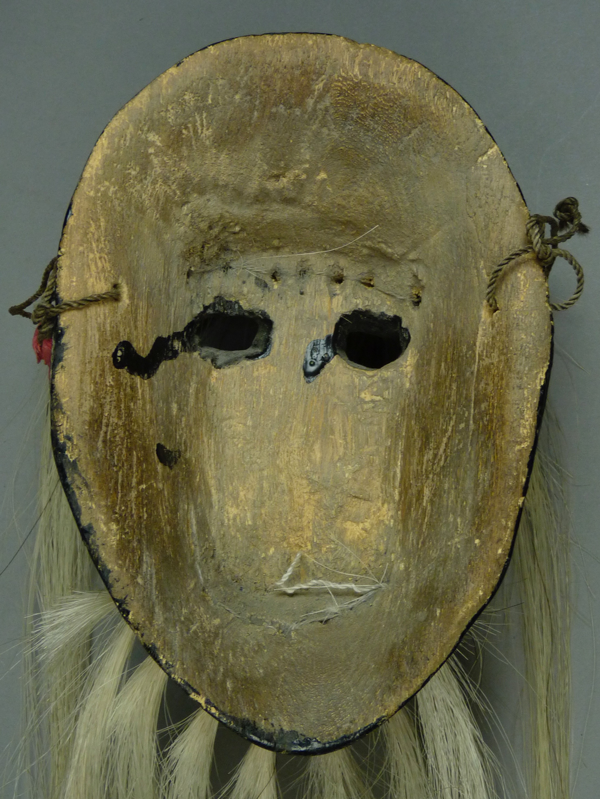 The back of this mask is heavily stained.

Next week we will look at some additional masks by Beto Matus.